Top Posts
Could Big Tech’s Iron Grip on Digital Advertising Soon Come...
Can Recent Oil Discoveries Prove to be a Boon for...
Is It Time to Explore an Alternative to Fractional-Reserve Banking?
Can AgTech Prove Instrumental in Helping to Feed the World’s...
Can the Indo-Pacific Economic Framework Expand US Economic Influence in...
Banks Remain Uniquely Vulnerable to Sophisticated Cyber-Attacks
Home Banking Assessing Banking Growth Prospects in the Philippines
Banking 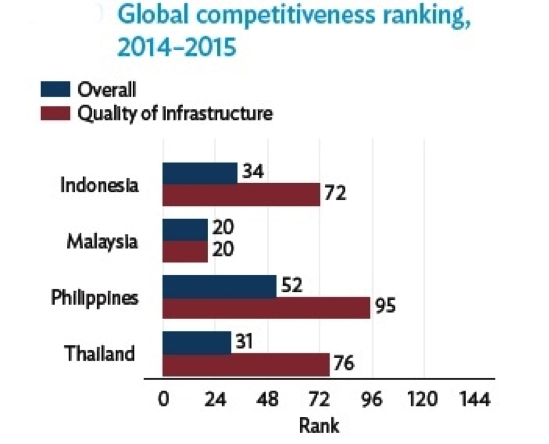 For the first quarter of 2015, the Philippines’ banking sector posted a set of highly positive results. Data from the country’s central bank, Bangko Sentral ng Pilipinas (BSP), showed that the country’s universal and commercial banks, which account for approximately 90 percent of the industry’s total assets, increased their total profits by 10.7 percent from last year’s first quarter, while net interest income rose by a healthy 5.9 percent. Additionally, the sector’s return on equity was 11.07 percent for the quarter, indicating an improvement in profitability from the 10.06-percent figure recorded during the same period in 2014.

The banking sector’s laudable performance during the first quarter is a continuation of the buoyancy it exhibited in 2014, during which time the financial system grew by 12 percent, chiefly underpinned by growth in loans of 19.5 percent and in portfolio investments of 13.3 percent. By the end of 2014, according to BSP, the sector could boast a presence of 648 different banks, 9,700 branches, 15,695 ATM machines, 517 offices of microfinance institutions and 251 banks with e-Banking facilities, such as online services and mobile banking. When it comes to banking in the Philippines, optimism abounds, and with good cause.

Credit-ratings agency Moody’s has attributed the success of the Philippine banking sector to several factors, including robust economic growth in the face of slowing global demand, moderate inflation and an improved standard of the banking sector’s asset quality, which has prevented overheating of domestic asset markets. Indeed, by the end of last year, out of the 69 banking systems around the world that were rated by Moody’s, the Philippines was the only country to receive a “positive outlook”—the rest were deemed either “stable” or “negative”.

The industry has also been undergoing a considerable structural transformation. In July 2014, President Benigno Aquino III signed into law the removal of restrictions on the degree of foreign bank ownership. Prior to this measure being effected, overseas banks were allowed to own only a maximum 60 percent of Philippine banks, while the number of wholly owned overseas lenders that were allowed to operate within the country was restricted to a limit of 10. Both of these caps have now been lifted. So far in 2015, four foreign banks have been approved for entry into the Philippines—South Korea’s Shinhan Bank, the Korean state-owned Bank of Korea, Taiwan’s Cathay United and Japan’s second biggest bank, Sumitomo Mitsui. Many more are expected to enter in the near future.

The implemented reforms clearly indicate Aquino’s intention to attract more foreign investment. They have been described by BSP’s governor, Amando Tetangco Jr, as a response to growing interest from foreign banks and as preparation “for full ASEAN (Association of South East Asian Nations) banking integration”. In March, all ASEAN member nations signed the ASEAN Banking Integration Framework (ABIF) agreement, whereby bilateral arrangements between two nations must be in place for every member to establish banking services in the other’s country. Under ABIF, this measure is expected to be enacted by 2020 for all member nations, although because the Philippines is considered among the bigger “ASEAN 5” along with Thailand, Malaysia, Singapore and Indonesia, a bilateral deal is required by 2018.

The influx of foreign interest is expected to create a fundamental shakeup to the industrial structure and competitiveness of the Philippines’ banking. Despite the existence of 648 different banks at the end of last year, it is the country’s 36 universal and commercial banks that make up the overwhelming majority of the sector in terms of assets. Moreover, the biggest four banks—Bank of the Philippine Islands, BDO Unibank, Metrobank and Land Bank of the Philippines—represent more than 45 percent of total assets. As a result, it is expected that many of the smaller lenders will be squeezed out of the industry altogether. A high number of mergers and acquisitions are also widely expected, and will be expedited by the BSP’s stated intention of giving tax incentives to large banks that buy small rural lenders.

However, there is still little appetite from bigger banks to extend lending to underbanked sectors of the economy, in spite of the country’s thriving liquidity levels. Independent financial research firm CreditSights recently asserted that banks have relied on gains from trading that have emerged as a result of credit-rating upgrades, rather than from increasing loans to smaller companies. Among the main challenges for Philippine banking going forward, therefore, will be to extend credit further to underbanked customer and corporate sectors. Although credit did expand by 16 percent last year, the Philippines’ overall credit-to-GDP ratio of 43 percent is still among the lowest in ASEAN, as is consumer credit, which accounts for only 7 percent of GDP. BSP data from earlier this year estimates that only 3 in 10 Filipinos have bank accounts, which remains a major concern.

Nevertheless, progress has been made in this area. Since 2012, the number of banks that offer accounts with low or no minimum deposits and no service charges, known as “micro-deposit accounts”, has tripled. Additionally, the number of e-money accounts, which provide holders with access to stored values of “electronic money”, also grew by a third over two years to 27 million in 2013. The expected increase in overseas institutions in the banking sector will also help in expanding credit through greater industry competition. So far, however, the influx has been gradual, rather than explosive. One explanation for this could be related to the Philippines’ historical lack of investment in infrastructure.

According to the Global Competitiveness Report 2014-2015 of the World Economic Forum, the Philippines is ranked a meagre 95th out of 144 countries when measuring the quality of its infrastructure.

In its Asian Development Outlook 2015 report, the Asian Development Bank identified the shallow Philippine investment record as a constraint on higher growth rates, poverty reduction and employment availability, but also recognised the measures taken by the government to address this shortfall. The state-run public-private partnership (PPP) program in particular has earned the government praise for motivating the private sector to jointly invest in projects covering road, rail, schooling and hospitals, and crucially along with it, local bank participation. The government hopes to double infrastructure spending from 2 percent in the past decade to 4 percent in 2015 and 5 percent in 2016. This may prove pivotal in raising banks’ lending appetites, and thus expanding credit deeper into the economy.

The banking sector also faces the challenge of deepening its capital markets. Despite the plethora of small banks in operation, the Philippines’ investment-banking industry remains underdeveloped. The bond market in particular suffers from low liquidity, partially as a result of an overly complex tax system that levies 20 percent on individual bond-buyers and 10 percent on individual investors of preferred stock, with taxes varying based on the nationality of the investor. A tax overhaul is just one of the measures the government will have to consider in order to make Philippine banking more attractive to outside interests.

Economic growth over the next two years is expected to continue at more than 6 percent, one of the reasons why ratings agencies are currently reaffirming their positive outlooks for Philippine lenders. The sector is also expected to continue enjoying strong levels of liquidity, supported by large volumes of deposits and liquid assets. It appears, therefore, that banks are well-placed to continue expanding lending facilities and credit portfolios. Moody’s senior analyst Alka Anbarasu estimated in March that growth in credit will continue “in the high teens range” in 2015. Assuming that the sector continues to consolidate and initiate greater competition over the coming months, the future for the Philippines’ banking looks bright.