Top Posts
What Is Synthetic Data, and Why Will It Be So...
The Pandora Papers: What Do They Tell Us?
Four Key Investment Trends for 2022
Low-Code and No-Code: Solutions that Are Solving Key Tech Challenges...
The Circular Economy Is Crucial to Achieving Sustainable Development Goals
The Outlook for Solar Energy
Home Banking Banco de Crédito del Perú: Meeting Its Customers Where They Are
BankingCompanies

Peru has been one of Latin America’s fastest-growing economies over the past decade—recording an average growth rate of 5.9 percent even under low inflationary conditions (averaging approximately 2.9 percent). This has been as a result of favourable economic conditions combined with sensible, well-measured macroeconomic policies. In addition Peruvian political leaders enacted a number of structural reforms to stimulate growth over the past decade that have yielded the intended results. Strong growth has provided boosts to employment and income rates while reducing poverty rates. With the mining sector as a primary economic driver for Peru, the economy relies on private- and public-infrastructure spending to expand export volumes and meet global demand. Over the past decade there have been significant structural reforms to facilitate this sector. In addition, there are a number of large-scale mining projects in the pipeline designed to further accelerate growth, development and, over time, aggregate demand. 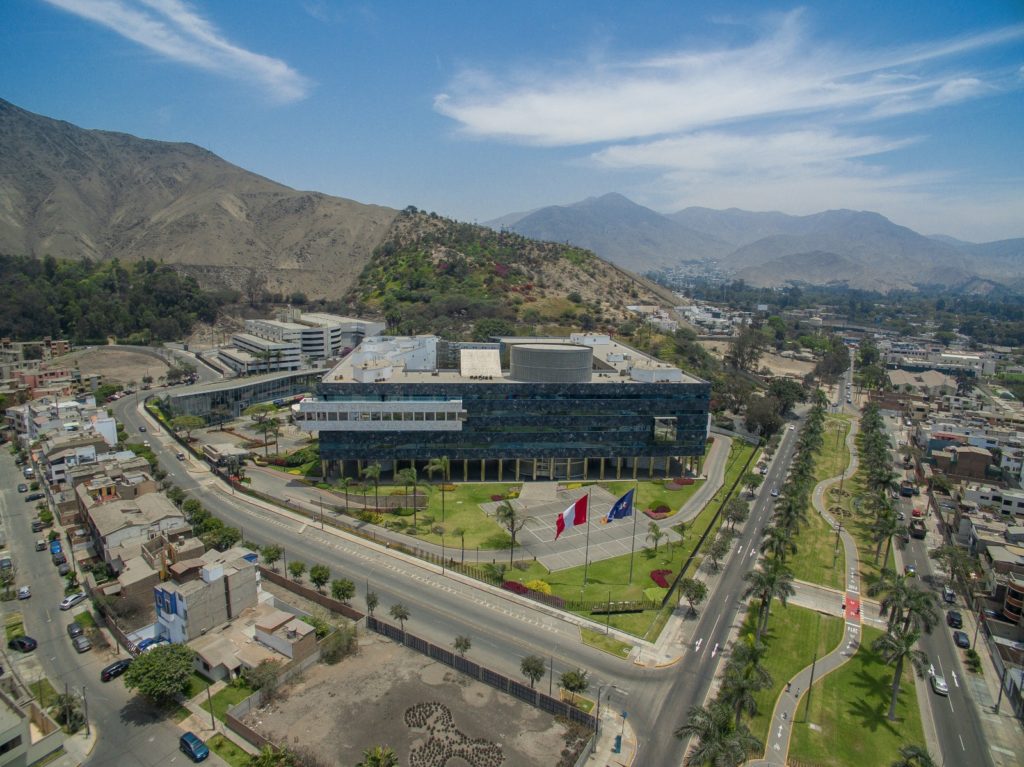 Complementary to economic growth and development is a stable and thriving financial-and-banking sector. In particular having a solid financial system in place encourages investors to direct capital into Peru and allows businesses and individuals to move forward with the financial support and infrastructure they require available to them. A key player in the Peruvian banking sector is Banco de Crédito del Perú (BCP). As the largest bank in Peru, BCP is part of the larger financial group Credicorp. BCP is a publicly traded company and an established leader in its sector—offering an extensive array of financial services and products in Peru. BCP has been in the Peruvian banking business for more than 127 years and is one of Peru’s most-recognised brands. With a network extending the bank’s reach across more than 6,000 correspondent agencies, 2,500 ATMs, nearly 450 agencies and 17,000 employees, it has grown its client base substantially to be the leader in its industry. Originally founded as Banco Italiano and operational under that name for 52 years, BCP was set up by a group of Italian Peruvian businessmen on April 9, 1889. These men had an aim to adopt a credit policy based on the principles that would guide institutional behaviour in the future. On February 1, 1942, the bank’s name was changed to Banco de Crédito del Perú. The bank has expanded its global reach over the years and now operates subsidiaries in Bolivia as well as branches in Miami, Florida (the US), Chile and Panama. 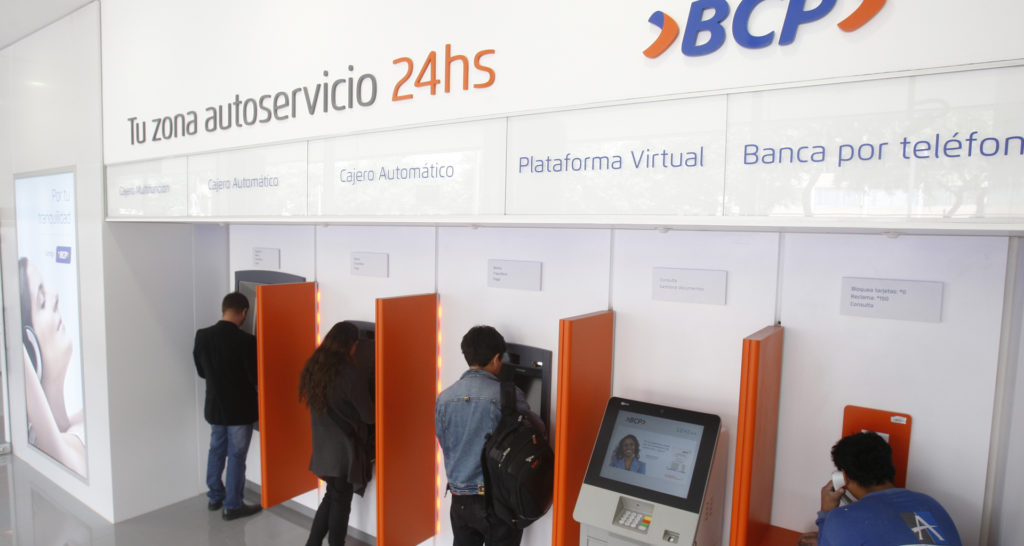 BCP offers a comprehensive range of financial services and products to serve a broad mix of customers, including individuals, corporate clients, small-to-medium enterprises (SMEs), micro-lenders, government entities as well as international agencies. BCP offers commercial banking, retail banking and asset-management services. On the commercial side of operations, it provides a diverse range of business-, corporate- and institutional-banking services and products. This segment includes leasing, corporate finance, international trade and many additional services. The bank furthermore offers a broad range of retail-banking services such as savings products, mortgage loans, credit cards as well as SME services and products. Examples of SME services include credit services, leasing and fixed-asset financing amongst others. BCP’s asset-management division offers a range of fiduciary and trust services as well as safekeeping and clearing services for securities. It also provides investment-portfolio management services. 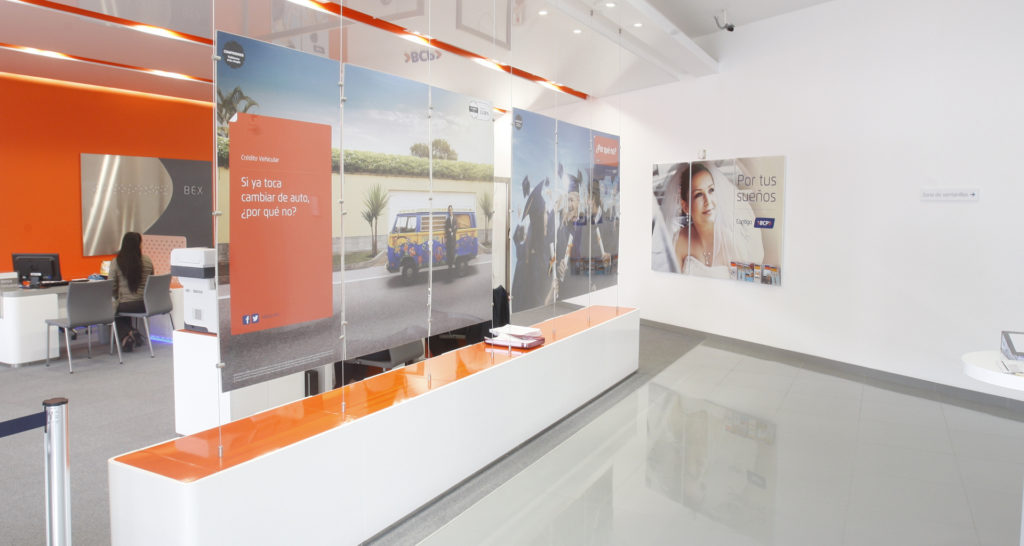 BCP is dominant in the retail-banking sector and beats out competitors as a result of its customer-oriented approach. With a strategic aim to be the number-one ranked financial institution for customer service by the year 2021, the bank applies this goal at all levels of operation. As part of reaching this lofty goal, it has developed the InnovaCXión Centre (CX stands for Customer eXperience), which aims to rethink and innovate the way processes are implemented in the bank. By utilizing creative methods of thinking and design, with multidisciplinary and collaborative teams applying new techniques, the bank is attempting to enhance customer satisfaction by developing initiatives that provide a distinctive digital experience. In the period of time since launch, the InnovaCXión Centre has already yielded positive results, introducing a new way to open accounts digitally and successfully reducing the average account-opening time by up to 84 percent. 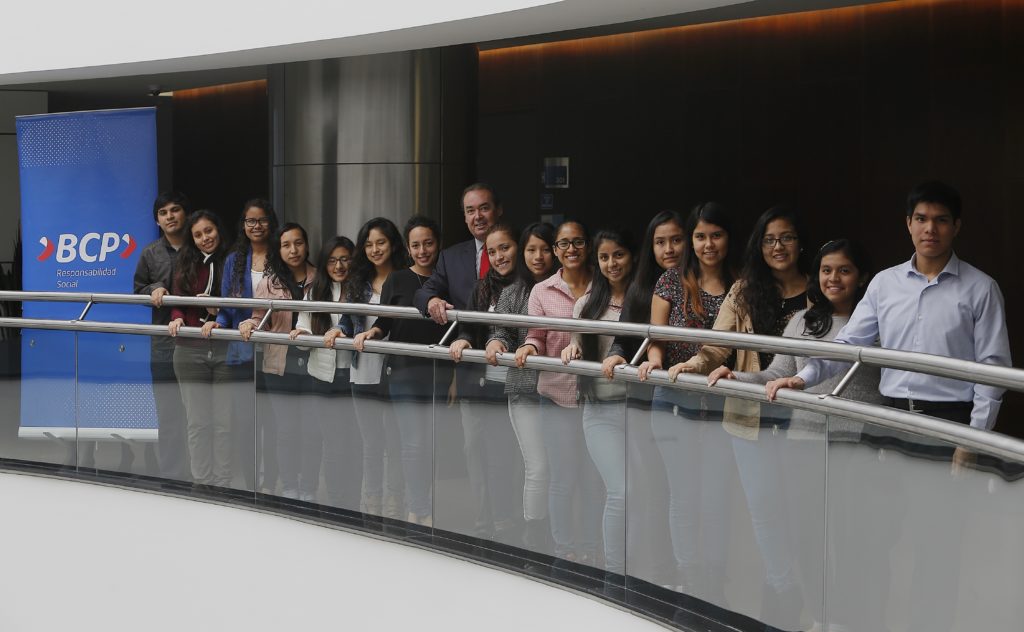 BCP has survived and succeeded for more than 120 years because of its core values and principles. It has applied an active value-focussed approach in the hiring process so as to attract and retain the best talent and deliver the best level of service to customers. It operates supportive and motivating training programmes to keep the workforce at the top of its field and aims to maximise employee-satisfaction levels as part of day-to-day operations. For example, between 2010 and 2015, the results of the Labour Climate Survey improved by 20 percentage points, going from a 63- to 83-percent satisfaction rate. With a workforce exceeding 17,000 employees, BCP has successfully exceeded standard setting Hay Group´s comparable benchmarks, including satisfaction rates found in regional market studies (68 percent), Peruvian market studies (70 percent) and regional-financial market studies (69 percent). Most recently, in 2016, for the third consecutive year, BCP was recognized as the most attractive employer in Peru, as well as the financial institution for which more Peruvians want to work.

BCP has managed to consolidate its position as a leader not only in the employee-satisfaction ratings but also in the commercial-banking segment. Part of its success has been the application of a strategic approach to growth and the ability to take on new challenges when the right conditions have presented themselves. As part of this approach, it has developed a thriving multi-faceted banking business that has been underpinned by innovation and strength at the bank. As an example, by focussing its efforts on creating digital innovations for banking, BCP is exploring optimised channels to reach Millennials. This marks an evolution from traditional banking practices and is a development to meet changing customer-interaction needs. This adaptive approach helps BCP stay ahead of the competition across all segments of the business. 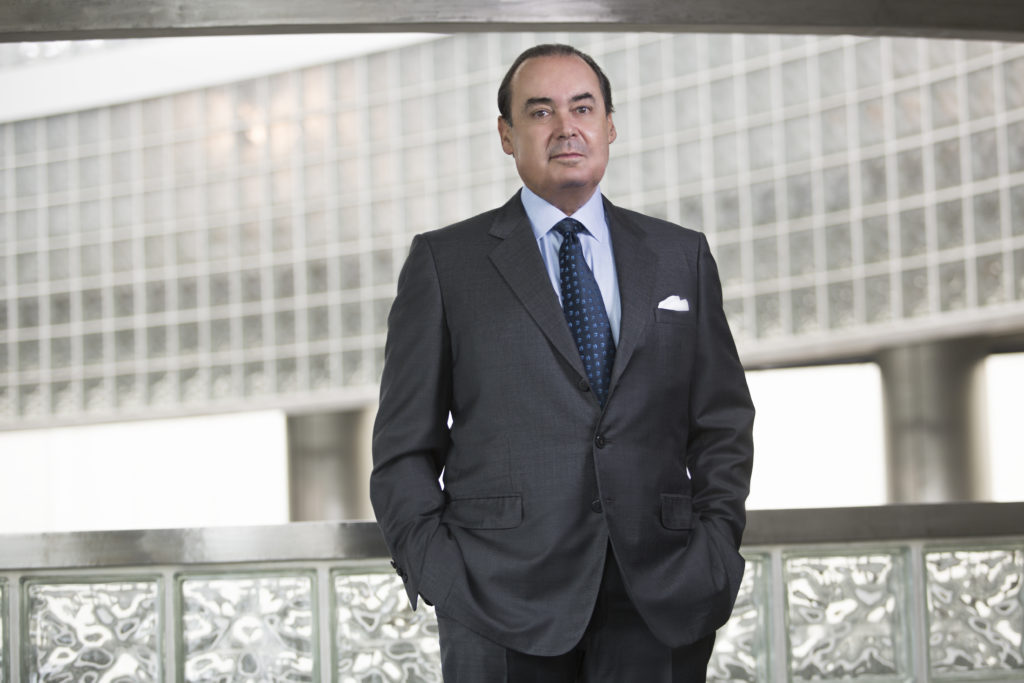 Key to applying this approach successfully has been the effective leadership of CEO Mr Walter Bayly. In the top role since 2008, Mr Bayly has been with the company for 30 years, allowing him to best understand and execute the core values and goals of BCP going forward. Specifically, Mr Bayly has strengthened the bank´s leadership position, making it the country´s most prestigious company for the past five consecutive years, according to the Merco Index. Mr Bayly’s leadership has been repeatedly recognized. This has included being named Peru´s most profitable CEO by a major Peruvian economic publication. This has been achieved thanks to Mr. Bayly´s efforts to strengthen the organization’s strategic vision, efficiency, innovation, adequate risk management, customer satisfaction and improved work climate—allowing BCP to remain the bank most preferred by Peruvians. 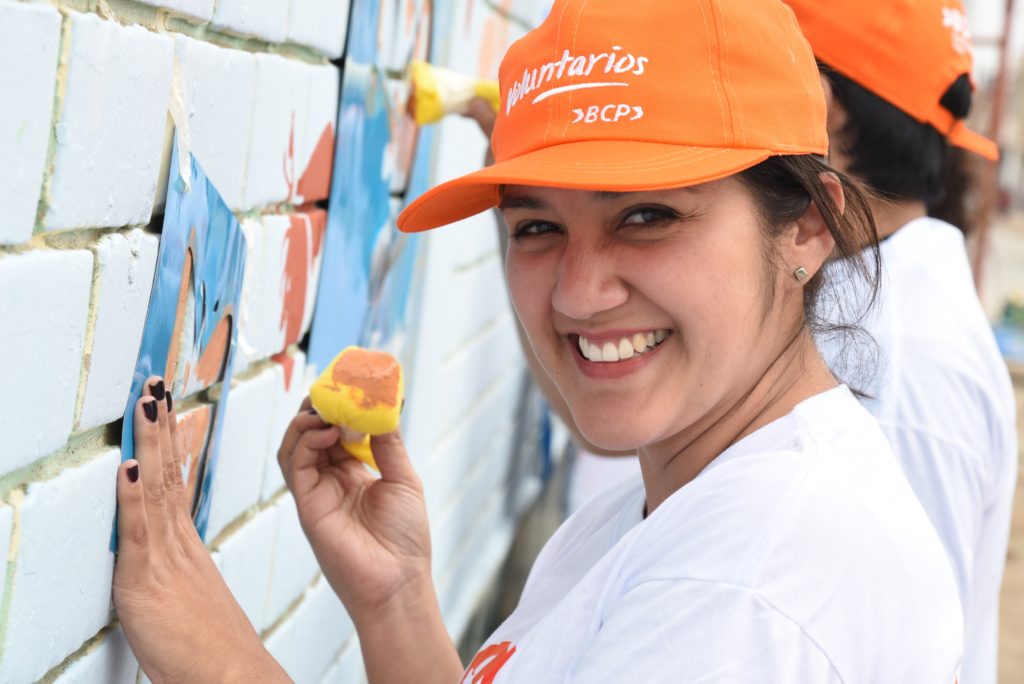 A further core value of BCP business operations is that of corporate social responsibility (CSR). It takes pride in leading by example as the top bank in Peru and one of the most recognised brand names. BCP aims to make positive contributions to society beyond profit-making and seeks to promote the wellbeing of Peruvian citizens. BCP´s CSR policy has focussed on high-impact initiatives that promote access to quality education and basic services since 2009. As part of this work BCP has implemented projects throughout Peru that have improved basic infrastructure. These projects have been designed to benefit areas in which help will substantially improve the quality of life of large communities. As an example BCP has completed a number of CSR projects, totalling US$85 million of investment, which include the rebuilding of 50 educational centres that have benefited more than 20,000 students. These centres have been specifically designed to provide students with newly equipped classrooms that incorporate state-of-the-art science laboratories and computer rooms as well as renovated school furniture. In addition, the projects offer valuable teacher training aimed at improving the quality of educational programs, as well as support for community development. BCP has committed almost $205 million towards 78 projects that span educational infrastructure, road works, drinking water and citizen-security initiatives.

An upcoming challenge for BCP will be the Peruvian economic climate and supporting both individuals and businesses with their dynamic financial needs. Peru has experienced strong economic growth over the past decade. However, the start of this year indicates growth may not be as strong as expected for Peru during 2017. The country’s finance minister, Alfredo Thorne, made an announcement to a press conference on January 25, 2017, indicating that Peru’s economy may grow by 3.8 percent during 2017 rather than the forecast rate of 4.8 percent. Mr Thorne explained that the government of Peru, led by President Pedro Pablo Kuczynski, was preparing a set of new measures to offset this negative impact on the economy. BCP may have to adapt fast to meet changing client needs if any economic contractions or shocks materialise from this potentially volatile situation.

Going forward, BCP will have to maintain a balance between navigating short-term challenges whilst pushing for long-term goals. The leadership of BCP is adept at handling this balance—having demonstrated a strong track record of applying a conservative business model that attempts to mitigate risk whilst concurrently driving growth. As part of keeping pace with changing customer needs, the bank has outlined plans to implement evolving ways of doing business—specifically through the application of a cross-cutting strategy aimed at reaching international efficiency standards and keeping pace with the digital age. In a country in which approximately 70 percent of the economy is informal, BCP has sensibly placed accessibility as a top priority of its medium-term agenda—with the important goal of bringing banking closer to the population through simple and inclusive tools.

Returning to Work: Is a Stand-off Between Bank...

Open Banking Is Here to Stay

The New Warriors on the Currency Battlefield: CBDCs

How Retail Banks Can Shift Gear and Deliver...

The Digital Transformation of Lithuania’s Banks: From Savings...

Get Ready for the End of LIBOR

Pursuit of the Optimal State for Regulatory Compliance

Do We Need a Digital Euro?

The Real Digital Challenge in Banking

The Pandora Papers: What Do They...

Are Banker Bonuses Returning to the...

Returning to Work: Is a Stand-off...