Top Posts
Interview with Mr. Olukayode Pitan, Chief Executive Officer and Managing...
Commodities Outlook for 2023
The Value of Cash in a Time of Crisis: How...
The US-Africa Leaders Summit: Fostering a Closer Relationship with the...
Three Key Sectors in Which to Invest in 2023
Three Key Stocks in Which to Invest in 2023
Home Banking Banking in Europe: Through the Pandemic and Beyond
Banking

Banking in Europe: Through the Pandemic and Beyond 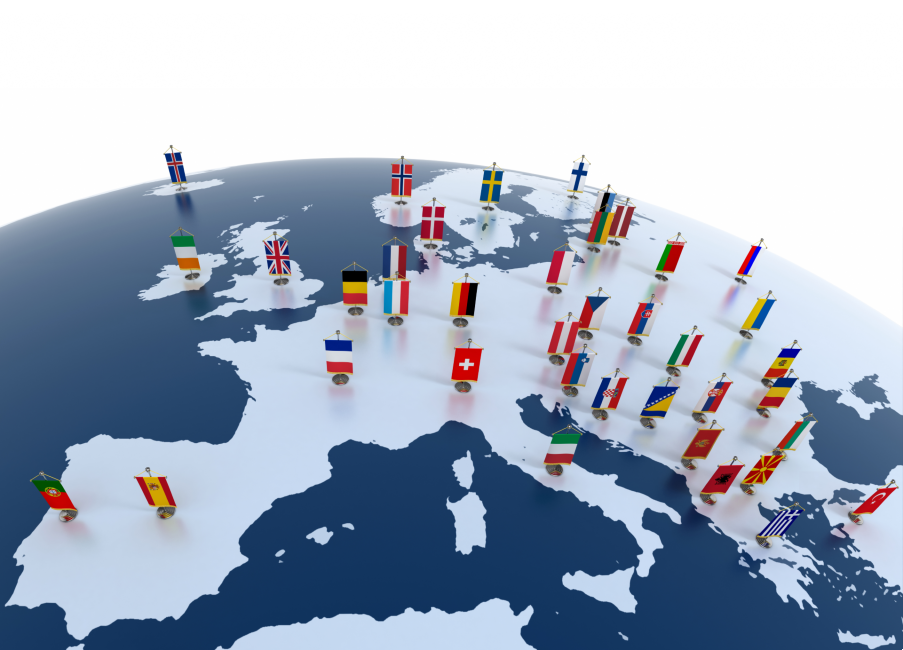 Banks have been hit by the economic repercussions of the COVID-19 public-health crisis, as have other sectors. Unlike in previous crises (most prominently the global financial and the European debt crises), this crisis did not start in the financial sector, but it has quickly become clear that the financial sector (especially its banks) is critical in mitigating the impact of the crisis and in supporting the recovery process. At the same time, financial institutions are also affected by the economic interruption: for example, by not earning money, households may not be able to repay mortgages and consumer credits; by not having clients or not being able to produce goods/services results, firms may suffer lost revenues, undermining their ability to repay loans. But it goes further: smaller firms with no access to public capital markets have been drawing down credit lines, where they are available, to have sufficient cash buffers during times of economic disruption, implying increased funding demands on banks.

In addition, governments have used the banking system to channel support to the real economy, ranging from credit guarantees to payment holidays.1 Regulatory authorities across the globe have taken important steps to avoid a credit crunch resulting from the procyclical tendencies in bank lending, including (i) lowering countercyclical buffers where they were previously above zero, (ii) allowing banks to operate temporarily below the level of capital defined by the Pillar 2 Guidance (P2G) and the capital conservation buffer (CCoB) and (iii) allowing banks to operate below 100 percent of the liquidity coverage ratio (LCR). At the same time, regulatory authorities, especially in Europe, strongly encouraged banks and other financial institutions to refrain from profit distribution.

While the current focus is on crisis mitigation, it is clear that losses have likely been accumulating on banks’ balance sheets, even if not recognised yet, and that banks will have critical roles in the post-pandemic reallocation of resources. There are several sources of fragility as we emerge from the crisis.

First, while a few sectors will recover stronger from this crisis (for example, information technology [IT]), others will emerge weaker and with less demand for their goods and/or services. There will certainly be a wave of insolvencies of unviable firms over the coming years, a process in which banks as prominent creditors for these firms will possibly play important roles but also suffer losses (or rather: will have to recognise losses).

Second, there is more general corporate over-indebtedness in the economy: Not all overleveraged firms are unviable; restructuring (as under chapter 11 in the United States) might be more efficient than liquidation (as under chapter 7 in the US); again, banks will have critical roles in this process.

Third, corporate over-indebtedness and insolvencies will be reflected in nonperforming assets on banks’ balance sheets. Allowing banks to delay the recognition of these losses can lead to zombie lending, as we saw in Japan with the crisis of the 1990s (it will again prevent the necessary reallocation of resources). Forcing them to recognise these losses, however, can result in undercapitalised, if not failing, banks. Are regulators and resolution authorities ready for this shock? In summary, banks will be forced to deal with significant losses to be recognised in the next few years; they will have to play important roles in corporate restructurings while being expected to support growing sectors of the economy with funding.

At the same time as banks across the globe thus play key roles in economic recovery, in Europe, the banking sector itself is in urgent need of restructuring. Unlike banks in the US, European banks had, on average, not recovered their pre-2008 market valuations before the outbreak of the pandemic, as shown in Figure 1 below. There are several reasons for this. 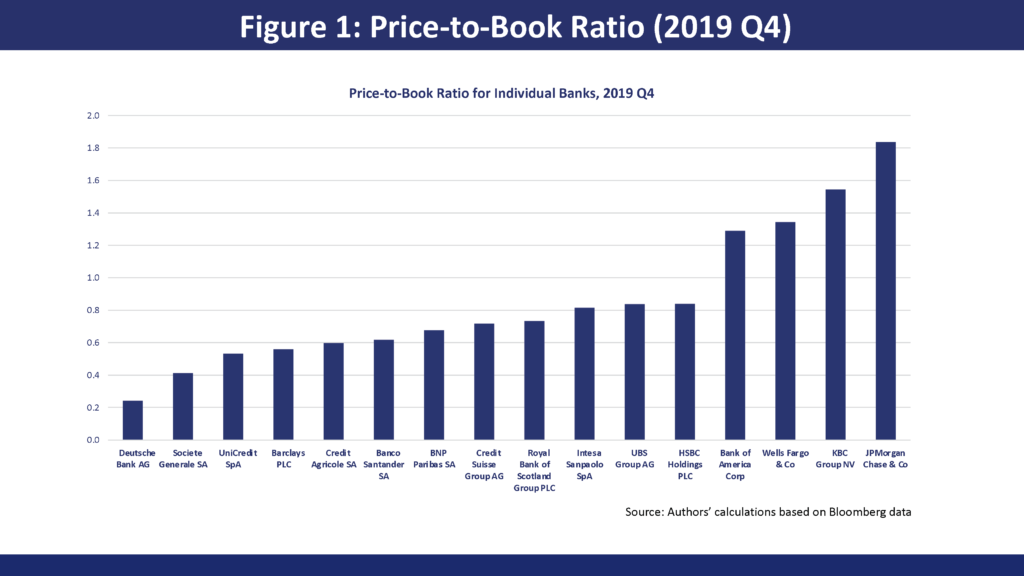 First is the low-interest-rate environment, which might not hurt in the short term but certainly will in the long term, especially as interest rates turn negative. While central banks can mitigate the impact of negative interest rates—for example, through tiering policies (i.e., differential interest rates on different components on banks’ reserves)—they cannot avoid negative effects. Second, while increasing the quality and quantity of capital requirements has made the banking sector more resilient, it has also reduced its profitability and has shifted activities into the less regulated non-banking segment of the financial system. Finally, digital innovation has given rise to new intermediaries such as fintechs (financial-technology firms) and bigtechs (such as Google, Amazon, Facebook, Apple, Microsoft), which will further pressure banks.

The COVID-19 crisis has exacerbated several of these trends. First, low interest rates are here to stay for much longer. While there was hope that the ECB (European Central Bank) might eventually be able to follow the US Federal Reserve System (the Fed) and raise interest rates back into positive territory, it seems likely that rates will stay below or very close to zero for several years to come, if not the whole decade. This will certainly put further pressure on banks’ profitability. While some of the other structural problems in Europe’s banking system might be addressed in a post-crisis restructuring, zero interest rates will continue to hamper banks’ profitability. Second, while there was a decision to temporarily “stop the clock” on the implementation of the remaining Basel III reforms (including TLAC [total loss-absorbing capacity] and MREL [minimum requirement for own funds and eligible liabilities]), the crisis will most likely provide further impetus to strengthen the capital buffers of banks. It is clear that the post-2008 regulatory reforms have made the banking system more resilient, although it might not be sufficient to withstand a shock like the one we are facing right now.

The regulatory reforms have also enabled regulators in Europe to loosen capital requirements—countercyclical and conservation buffers as well as Pillar 2 capital requirements—with the objective to reduce the likely lending retrenchment we might see otherwise in a recession. Neither countercyclical nor conservation buffers existed before Basel III. The experience so far, however, has shown the limited effectiveness of such loosening; trying to entice banks to lend more with such macro-prudential tools seems like pushing on a string. Finally, the trend towards digitalisation might increase even further in the wake of COVID-19, as social distancing may become the new norm and personal interactions between banks and clients carry even higher costs. In addition, bigtech companies are likely to come out of the crisis further strengthened, with large cash piles and in strong positions (and possibly with strong appetites) to expand into financial-services provision. This might put additional competitive pressure on banks in their core business lines.

In sum, there are competitive threats from in- and outside the financial system, and there is a need for consolidation and possibly retrenchment of banks.

One important element in this context is that of the national market versus the European market. Policymakers have established the basis of a regulatory banking union in the euro area, with the establishment of the Single Supervisory Mechanism (SSM) and the Single Resolution Mechanism (SRM). Other elements are missing (such as a common deposit-insurance scheme) or are still under construction (such as a common backstop). Ultimately, a euro area-wide financial safety net aims not just at making European banking more stable but also cutting the doom loop between sovereign and bank fragility. While the regulatory structure has made progress, there is still no single market in banking, which would imply a move from a national to a European banking system. Such a move would imply more cross-border mergers, but also a political decision to move away from national inference (as we observed, for example, in Germany in the case of merger talks between Deutsche Bank and Commerzbank).

European banks will thus face challenges on multiple fronts over the next few years. This raises the question of the management and governance structures of banks. While there is typically a lot of focus in the media on the top management of leading European banks, there is less emphasis on the role that boards have both in strategic decisions and challenging management on behalf of shareholders. The global financial crisis (GFC) raised serious doubts about bank governance and, specifically, the roles of bank board members in banks’ decisions to take aggressive risks (including through mergers) without properly managing them and in ignoring early warning signals of fragility. Over the past decade, expectations of bank board members have, therefore, significantly increased—in particular, non-executive board members.

However, if bank boards are to take on the role of the third disciplining pillar of bank management, next to market and supervisory discipline, both their access to data and their rights to challenge bank executives have to be strengthened. As much as this is a question of rules and laws, it is a question of norms and choosing the right non-executive board members. Recently, the ECB announced that it “wants to be more transparent about its supervisory expectations regarding the quality of appointees. To this end, the ECB plans to publish a revised handbook to replace the current Guide to fit and proper assessments in 2021 and to engage more actively in the selection of the boards.”2

Members of the board have to be suitable not only individually but also collectively and cover specific knowledge, skills and broad ranges of experience to perform their responsibilities and duties. For that purpose, credit institutions have to put in place policies promoting diversity in the management body. Supervisors check diverse criteria: experience, reputation, conflicts of interest and independence of mind, time commitment and collective suitability. Supervisors lead their assessment processes with case-by-case and proportionate approaches that take into account distinctive national features of banks and each role within management bodies, with the aim to ensure a level playing field, notwithstanding the difficulties stemming from the different implementations into national law of EU (European Union) standards.

Once appointed, board members are expected to challenge effectively and constructively the management on the definition of the bank’s strategy, including the risk appetite within which the bank business will operate. Bank supervisors constantly scrutinize and assess the adequacy and effectiveness of checks and balances in banks’ internal governance. The pandemic has resulted in more intense supervisory scrutiny, particularly in the areas of credit risk, capital planning, IT security and compliance. Going forward, it is therefore important both for banks and regulatory authorities to devote more attention to ensuring sound internal governance in order to meet supervisory expectations as well as shareholders’ interests.

In summary, the banking sector will be critical in the post-pandemic recovery process while facing the urgent need for restructuring. In addition to challenges for supervisors, it is important that boards, including non-executive board members, step up to the challenge to thus shape rather than react to this process.

Elena Carletti is Professor of Finance at Bocconi University and an independent Board Member at UniCredit Bank, Founding Director of the Florence School of Banking and Finance (FBF) and Member of the Steering Committee for the FBF Bank Board Academy for Non-Executive Directors.