Top Posts
Challenges Remain, But There Are Opportunities to Be Had in...
Interview with Mr. Olukayode Pitan, Chief Executive Officer and Managing...
Commodities Outlook for 2023
The Value of Cash in a Time of Crisis: How...
The US-Africa Leaders Summit: Fostering a Closer Relationship with the...
Three Key Sectors in Which to Invest in 2023
Home Banking What Does a Bank’s Payroll Reveal About its Risk-Taking?
Banking

What Does a Bank’s Payroll Reveal About its Risk-Taking? 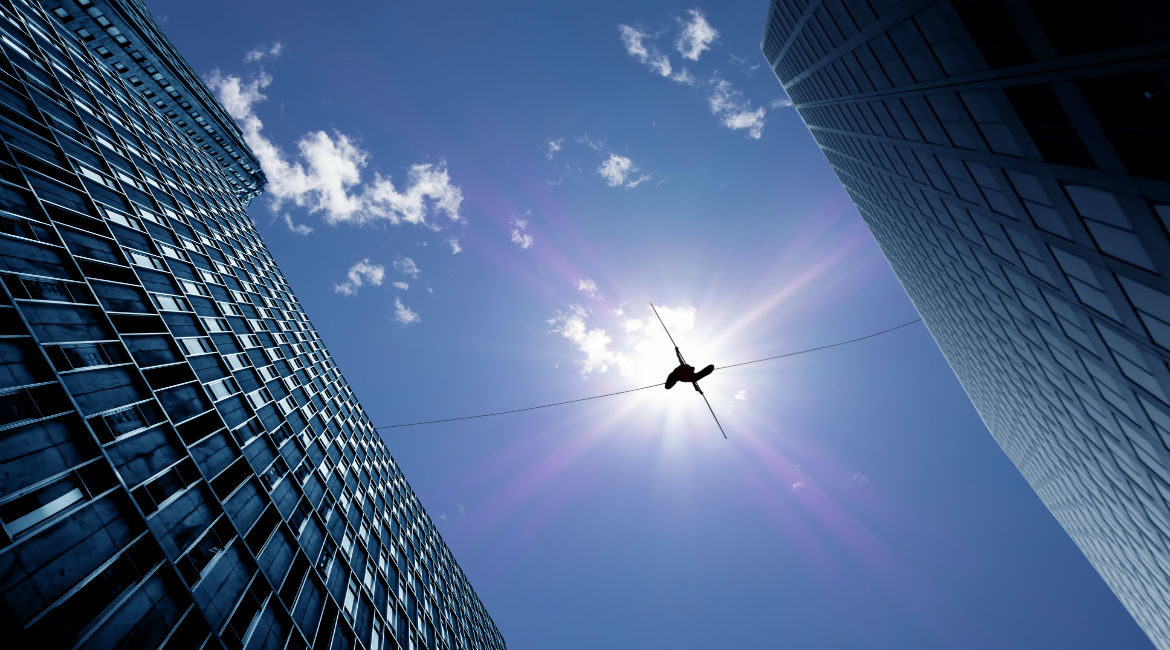 By Matthias Efing, Professor of Finance at HEC Paris,

Harald Hau, Swiss Finance Institute Professor of Finance at the University of Geneva &

Patrick Kampkötter, Professor of Managerial Accounting at the University of Tübingen

Since the 2007/08 financial crisis, it has become a widely shared view that bankers’ bonuses are at least partly to blame for what looks, ex post, like excessive risk-taking. As a policy reaction, extensive new regulations have been put in place ranging from new clawback rules to bonus caps.

Yet a survey of the academic literature reveals that—in spite of the shared interests of practitioners, regulators and academics with regard to bank-employee remuneration—very little is known about its design and effects on bank risk, profitability and financial-sector stability. In particular, the following three questions have largely remained unanswered:

The lack of empirical evidence regarding these questions is largely due to the fact that high- quality data on bank compensation is not publicly available. This is particularly true for compensation data for non-executive employees. But new data from a major international pay-consulting firm now allows us, for the first time, to pool payroll records across 67 banks in Austria, Germany and Switzerland and to uncover novel insights into the pay incentives of bank employees and their relationship to bank risk (see our recent article “Incentive pay and bank risk-taking: Evidence from Austrian, German, and Swiss banks”, Journal of International Economics, 2015. Available at http://bit.ly/2ivwKiy).

The dataset contains detailed individual information on base salary, bonus payments, age, firm tenure, hierarchical level, functional area and specific job function. The functional areas represent a broad classification of the main sectors in the banking and financial-services industry, including, for instance, the critical segments of investment banking and capital market/treasury. A useful feature of the dataset is the systematic comparability of employee positions across and within different banks. The main compensation measure, the bonus share, is defined as the proportion of variable pay over total annual compensation and is calculated separately for the different bank segments. Unlike previous research, we were able to measure employees’ incentives across all banking activities and hierarchical levels. Previous studies on US banks focused almost exclusively on reported board compensation, even though these executives do not necessarily receive the highest levels of compensation or make the most critical and risky decisions.

The new data has allowed us to document the following stylized facts: First, and least surprising, the bonus share is highest in investment banking and the capital-market segments of banking. In the years 2004 to 2007, before the financial crisis, it amounts to, on average across all hierarchies, 28 percent of total compensation. Senior employees in these divisions can easily earn a bonus share of up to 60 percent. Second, the average bonus share varies significantly across different banks even when we focus only on employees in the segments of investment banking and capital market/treasury. Employees performing similar functions thus take home very different incentive packages depending on the banks for which they work. Third, the bonus share decreases substantially from the pre-crisis years 2004‒07 to the crisis period 2008‒11. Lower bonuses paid to traders after 2007 are not accompanied by a decrease in trading income, which suggests that external pressures on banks to reduce bonuses could be responsible for lower pay incentives during and after the crisis.

The bonus share in the segments of investment banking and capital market/treasury is positively correlated with relative trading income, defined as trading income standardized by the gross interest income of a bank, and with the standard deviation of trading income. Yet, these positive correlations do not allow us to conclude that high bonuses cause higher trading profitability and higher bank risk. The reason for this is that higher profits—even if generated by chance—are typically rewarded by higher bonuses.

To disentangle the effect of incentive pay on trading income from such reverse causality, we need to identify exogenous reasons as to why some traders receive particularly high bonuses that have nothing to do with the profitability of their trading. We find two such variables that explain exogenous bonus variation: First, we use the bonus share in the retail-, private- and corporate-banking segments to proxy for the bonus share of traders. Typically, employees in the retail segment do not receive larger bonuses because their colleagues in trading have generated high profits. Yet banks that generally pay high bonuses to employees in retail banking tend to pay high bonuses to their traders, too. In other words, high bonuses in other bank segments indicate a bank-specific “bonus culture” from which bank traders, in particular, profit. Second, we use the size of the capital-markets divisions relative to total bank employment as an additional source of exogenous variation in bonus incentives. This is motivated by the fact that banks with many more employees in retail, private and corporate banking tend to overpay their traders relative to the industry standard, presumably for lack of monitoring experience.

Using these two sources of variation in the strength of bank incentive pay, it is possible to make a judgment about the direction of causality: We find a statistically and economically significant causal effect of pay incentives on trading profitability and risk, which was strongest in the years before the crisis. An increase of the bonus share by one standard deviation implies an increase of both the relative trading income and its volatility by 0.9 standard deviations. Figure 1 illustrates these causal relationships between incentive pay and trading profits in Graph (a), and between incentive pay and trading risk in Graph (b). 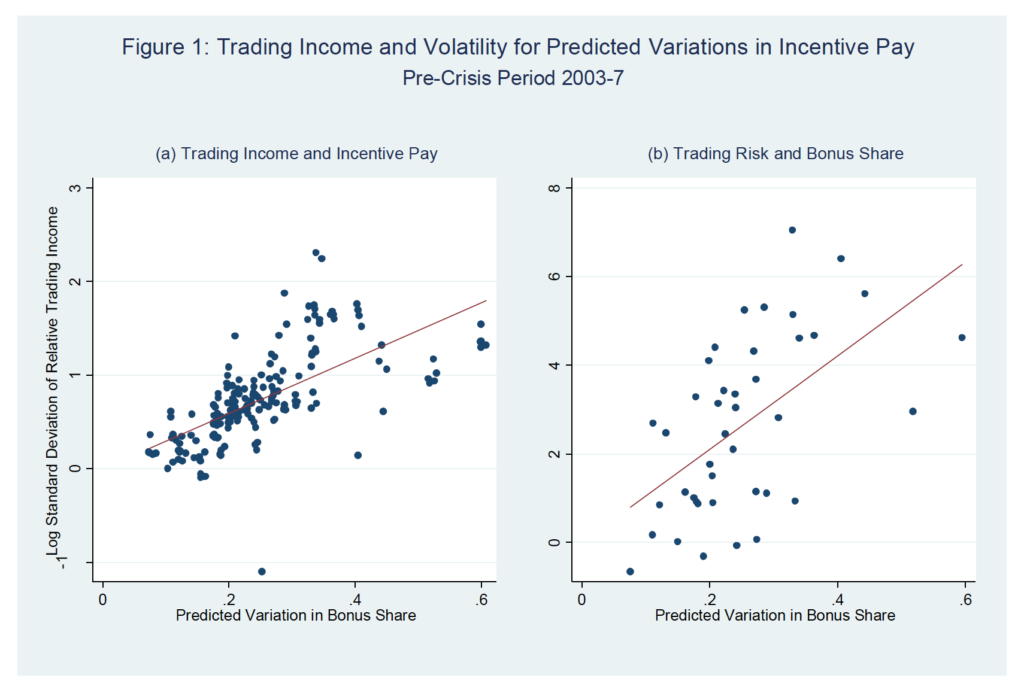 When are bank bonus incentives optimal?

Bank regulation often refers to “excessive risks” that need to be checked. Financial theory provides clear guidance as to when a position is excessively risky: an increase in trading risk is excessive if it is not compensated by a sufficient increase in expected profitability. It follows that pay incentives are optimal if they induce traders to strike the optimal balance between risk and expected profitability. Put differently: Does the additional profitability induced by higher incentive pay justify the higher volatility of trading income?

We can again use the exogenous variation of the incentive pay predicted by the strength of the bonus culture and the bank structure to estimate its marginal effect on the observed Sharpe ratio. Pay incentives (performance-sensitive pay) are excessive if their reduction would increase the Sharpe ratio; whereas they are optimal if they maximize the Sharpe ratio.

We find that the predicted exogenous variations in the bonus share of traders had a negative marginal effect on the Sharpe ratio of trading during the pre-crisis years 2003‒07, suggesting

that pay incentives were excessive in the sense that they reduced the NPV of the trading activity. By contrast, the relationship between the predicted variation of the bonus share and the Sharpe ratio becomes slightly positive after 2007, suggesting that the observed bonus moderation removed excessive pre-crisis incentive pay and possibly led even to an over- adjustment. Figure 2 draws the Sharpe ratio for the predicted variation in the bonus share for the two periods, 2003‒07 and 2008‒11. 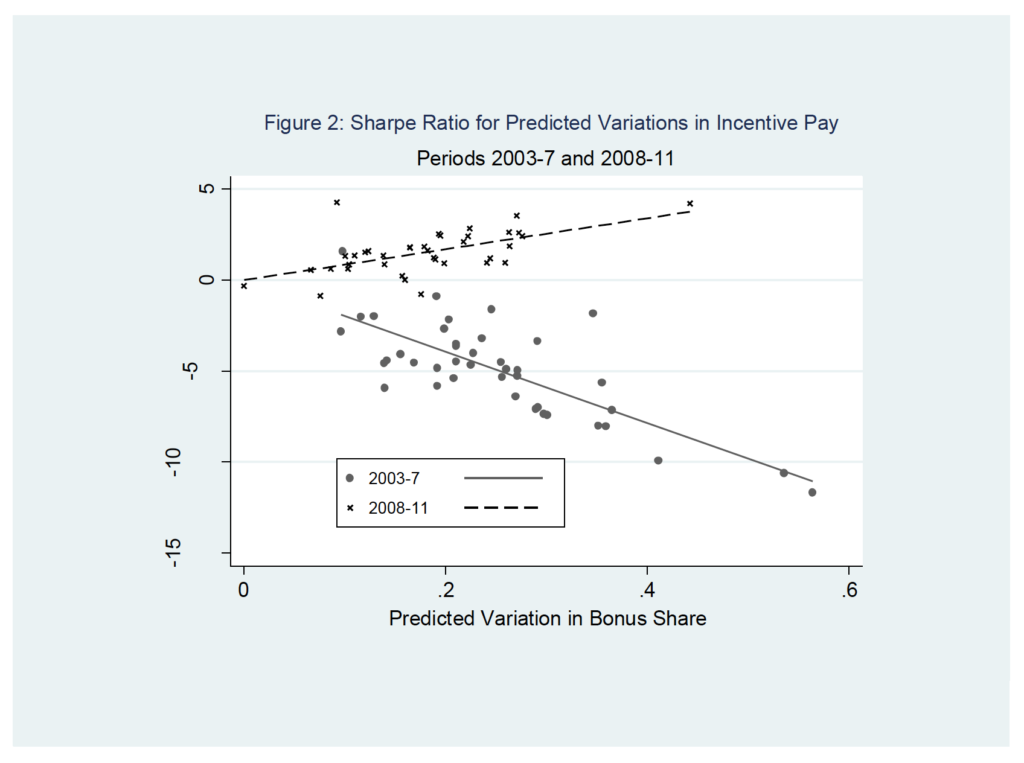 The current regulatory environment is characterized by a variety of ad hoc policies: European Union regulators capped bankers’ bonuses at twice the base salary for banks. In the United States, executive pay was scrutinized in the post-crisis years, for example, through the Say-on-Pay rule included in the Dodd–Frank Act. In Switzerland, a popular referendum has tried to cap the highest executive-pay package at 12 times the lowest salary paid out in the same firm. At the international level, the G20 has established the Financial Stability Board (FSB), which proposes principles for sound compensation practices. These different regulatory frameworks often disagree on how bank salaries should be regulated. While the European Banking Authority sees bonus caps at 100 or 200 percent of the fixed salary as the right approach to curbing excessive pay incentives, England’s Prudential Regulation Authority favors deferred compensation and bonus clawbacks, because larger base salaries in response to bonus caps could make banks more vulnerable during downturns.

The evidence from the payroll data suggests that pay incentives can indeed be too high and may not even serve shareholder interests. However, optimal bonus size could also depend on bank-specific factors difficult to evaluate for any regulator. A one-size-fits-all solution for the bonus cap may easily lead to an excessively constraining framework that comes with its own social costs. Allowing shareholders to set higher bonus caps relies on the potentially incorrect assumption that bank owners pursue the same interests as regulators. In light of these dilemmas, bank capital regulation appears to be a much simpler and better path toward greater financial stability.