Top Posts
Challenges Remain, But There Are Opportunities to Be Had in...
Interview with Mr. Olukayode Pitan, Chief Executive Officer and Managing...
Commodities Outlook for 2023
The Value of Cash in a Time of Crisis: How...
The US-Africa Leaders Summit: Fostering a Closer Relationship with the...
Three Key Sectors in Which to Invest in 2023
Home Banking Becoming an Agile Bank
Banking 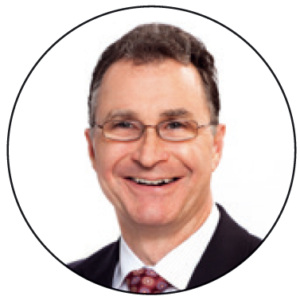 Fifteen years ago, Celent launched a program to identify effective uses of technology in banking. This annual program, Celent Model Bank, has garnered steadily increasing participation from banks in every region of the globe. With COVID-19 wreaking havoc throughout 2020, we feared banks would not participate in our annual awards. Instead, we received a near-record number of nominations detailing courageous stories of customer advocacy, organizational pivots at breakneck speed and celebrations of jobs well done. Innovation in banking didn’t slow during the pandemic; it accelerated!

• Business agility means a company is always in a position to take account of market changes.

• Constant change is the new dynamic of the global economy and makes agility even more necessary than ever.

Reading descriptions of so many initiatives in which such historically bureaucratic, slow-moving organizations as banks demonstrated notable agility begs the question, “How did this happen?” This question spawned an invitation-only, interactive roundtable session of senior innovation leaders and decision-makers at leading financial institutions, followed by a series of one-to-one telephone interviews. Our topic, “Accelerate!”, centered around the growing importance of agility as part of a bank’s operations, decision-making and product development. We summarize the session’s discussion points in this article.

To be clear, we are speaking of business agility, that is, an organization’s ability to adapt quickly to changing market conditions. This is not to be confused with agile software-development methodology.

Agility: More important than ever

All those participating in Celent’s annual virtual event were asked the question, “How important is agility to your organization compared to one year ago (pre-pandemic)?” In a nearly identical proportion, the overwhelming majority of both banks and solution providers considered agility to be more important today. Just 15 percent felt its importance hadn’t changed. Roughly half of the industry considered agility significantly more important than it was pre-pandemic. 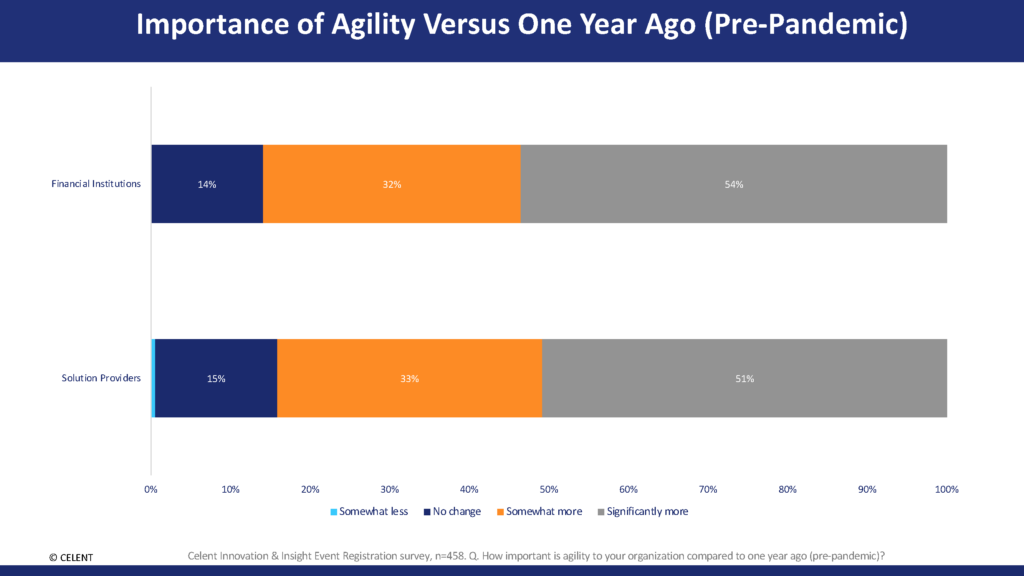 Some bankers regard agility’s importance as so intuitively obvious that it seemed silly that we were asking the question. That said, several ideas emerged from our discussions that underscore the agility imperative. Specifically:

More than one banker cited specific efforts to encourage and measure the agility in their organizations. In each case, the efforts predated the pandemic and served the banks well during the pandemic.

Agility is clearly a strategic intent at some institutions. One banker put it this way, “Without a step increase in agility, there is no way banks can substantially change business models.” Many insisted that agility and technical prowess go hand in hand.

Agility is moving faster. Nimbleness is flexibility; a willingness to do things differently and do different things. SVP Treasury Product Management, US regional bank

While there was broad agreement about the growing importance of agility, our discussion revealed dramatic differences across organizations in terms of how agility is being pursued.

Most bankers, during the breakout discussion, considered agility as a component of their institutions’ larger digital-transformation efforts. But digital transformation is a complex endeavor that can contain several strategic imperatives—each having a number of levers that can spawn multiple projects. For example, many banks seek to be more client-centric and less product-centric. Others seek efficiency improvements or the ability to accelerate innovation. A third ambition is to develop new business models to create future value. These and other strategies require a mix of interdependent capabilities. The collective pursuit and continual improvement of these capabilities is the essence of digital transformation. Agility is one of them.

Celent’s parent, Oliver Wyman, has been engaged as a strategic consulting partner serving banks globally. Its digital practice is uniquely equipped to help banks along their digital-transformation journeys. Oliver Wyman’s Digital Wheel aims to illustrate the interdependency between common strategic intents and requisite capabilities. In this view, there are three primary intents that singularly or combined drive banks’ digital-transformation initiatives. Underpinning each of these three intents are five core capabilities. Oliver Wyman uses this Digital Wheel framework to help banks manage the many facets of change necessary for digital transformation. What emerged from our breakout session is that all five of these capabilities impact business agility and vice versa. 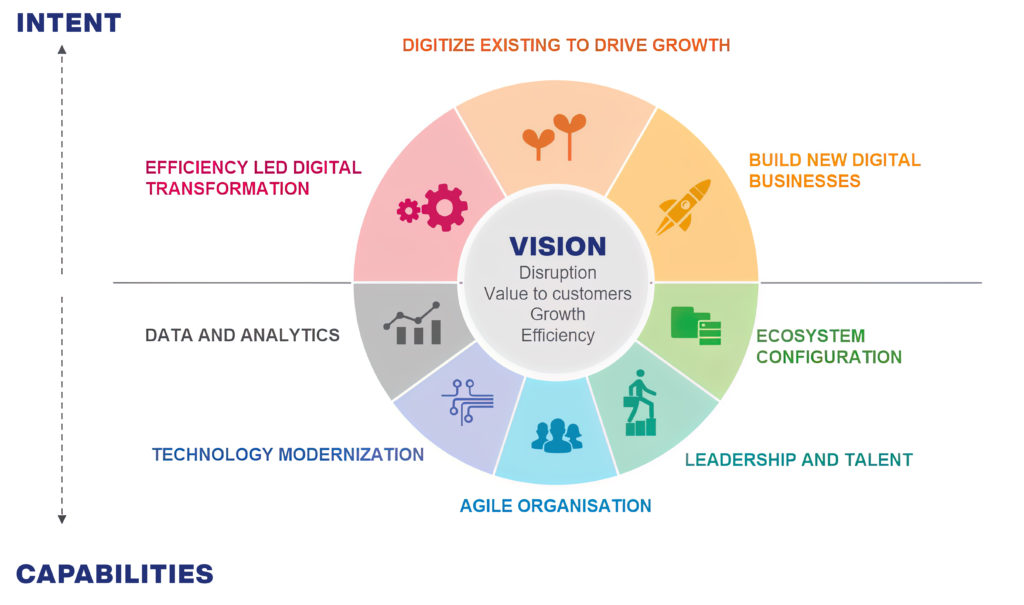 Without prompting, each of these topics was part of our conversation.

Capabilities: How to improve agility

Business agility is a necessary but not all-sufficient capability for digital transformation. Other interdependent capabilities are needed. Before we consider each of the interdependent capabilities required for digital transformation, let’s look at two notions that transcend them all. The first is that business agility requires focus and constancy of purpose. It is not the natural state of most organizations and work processes. It must, therefore, be continually and intentionally pursued.

It is often said that necessity is the mother of invention. One banker in our roundtable commented, “COVID-19 was the father of invention.” The pandemic changed everything. Institutions of all sizes needed new ways to interact, both internally and with customers. Change was both necessary and urgent, and this focused resources like nothing else could have. That alone may be responsible for banks’ abilities to pivot quickly. Many banks surprised themselves with what could be achieved so quickly. The challenge will be to operationalize that focus going forward. Not a single banker in our roundtable felt his or her organization had fully realized this objective.

Business agility also requires a bias for action. Others may describe this as a dissatisfaction with the status quo—that is, challenging historic expectations and processes and advocating for faster, more effective approaches. One banker referred to this dynamic in the context of cloud migration. The bank used to be “resistant to cloud. We’ll study up and get ready for it next year”. Now, as a result of COVID-19, the bank had to get it done (e.g., cloud policy, enterprise Microsoft cloud adoption). It shouldn’t take a global pandemic to cultivate a bias for action. After the fact, most of our participants readily agreed.

A common sentiment expressed during our conversations was that development teams have been using agile methodology for some time with good results. The problem is the larger organizations’ slowness. An agile organization requires an agile business structure, not merely agile technology. Several bankers from large institutions asserted that truly agile transformation requires a wholesale change in personnel and culture—and doing so takes a long time. We suspect that is true for smaller organizations, as well.

One banker shared that virtually everything is agility-focused now. In that bank, the development teams redesigned around agile scrum a couple of years ago, but it is taking the broader organization—largely the business units—a long time to realign and to embrace the change so that it can permeate throughout the organization.

Many bankers also recognize that it’s easy to regress—to coast and relax and pretend that agility isn’t quite as important any longer (post-pandemic). Don’t do it! One head of digital remarked that he thought his institution had retained “about half” of the process improvements they had instituted during the pandemic. In a garden, weeds grow back quickly!

In these examples, agility may not be the primary objective of technology modernization but is enhanced as a result.

Much has been written about the importance of an enterprise-wide data-and-analytics strategy to enable successful digital-transformation efforts. While this was not the focus of our discussion, the topic came up repeatedly in the context of agility. In several cases, the reference was the time and/or expense associated with acquiring necessary data.

More than one banker mentioned that data is often an afterthought at his or her institution. The Big Tech firms, in contrast, have well-honed data mindsets. In addition, these firms excel at value exchange—that is, the value they provide users in return for their data. In part, that may be a result of the Big Tech’s spending on data, whereas banks tend to take it for granted. The Big Tech constantly think about how to leverage data. As a result, it is managed exceptionally well.

An SVP of digital banking at a regional bank described an effort at his bank to facilitate customer digital-channel utilization. Data lives in multiple places, so pulling together a basic overview was key. This meant identifying who is transacting, in what channels, with what amounts and so on to understand the transactions that customers couldn’t complete via digital channels that experienced high volumes in other channels. Armed with that insight, the bank assembled a team to quickly enable transaction migration one by one. The bank found there were unintentional differences of capabilities by channel. They discovered the white space (e.g., submit a debit-card claim online) and built in those capabilities. The result was a rapid and sustained increase in customers’ digital utilization.

The importance of senior-level leadership repeatedly surfaced during our conversation. Agility must be a top-down initiative because it demands collaboration across the entire organization. “We can only be as effective as the top of the house allows,” said one banker. Agility has to be an explicit strategic objective, and progress needs to be celebrated and rewarded. One banker described how senior EVPs (executive vice presidents) were on routine calls, lending support and removing barriers. At that bank, agility gets hands-on support from the top. Other suggestions included:

The group didn’t need convincing about the growing importance of the technology ecosystem. In dealing with technology vendors and system integrators with the aim of improving agility, just two suggestions emerged:

Hopefully, these ideas will spawn action at your institution as you seek to grow in business agility.

ABOUT THE AUTHOR
Bob Meara is a Senior Banking Analyst in Celent, with a research focus on branch and ATM delivery channels, omnichannel customer engagement, and check and cash payment-processing technologies. Previously, Bob held positions in marketing and brand management at a variety of firms, in addition to being a commissioned naval officer.
Back To Top
Agile BankAgilityAirbnbAmazonBankingBanking DataBob MearaCelentCelent Model BankCOVID-19Digital TransformationDoorDashOliver WymanUber
0 comment 0 FacebookTwitterPinterestEmail
previous post

How Technology Is Boosting Financial Inclusion Around the World

Interest Rates and Human Rights: Reinterpreting Risk Premiums to Finance the Green New Deal and the Fight Against COVID-19*