Top Posts
Challenges Remain, But There Are Opportunities to Be Had in...
Interview with Mr. Olukayode Pitan, Chief Executive Officer and Managing...
Commodities Outlook for 2023
The Value of Cash in a Time of Crisis: How...
The US-Africa Leaders Summit: Fostering a Closer Relationship with the...
Three Key Sectors in Which to Invest in 2023
Home Banking Can Basel III Work for Emerging Markets and Developing Economies? New Report Says Yes, With Some Key Adjustments
Banking 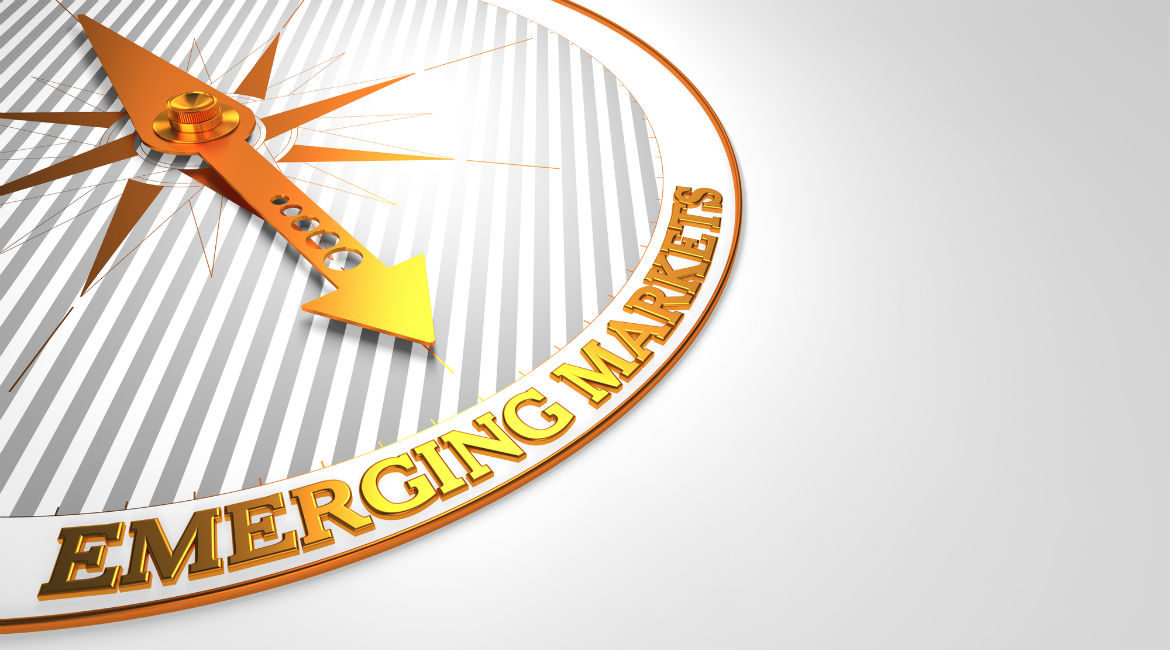 By Dr. Thorsten Beck, Professor of Banking and Finance, Cass Business School, and

Adopted in late 2017, the regulatory standards for the banking sector recommended by the Basel Committee on Banking Supervision (BCBS), called Basel III, are already transforming the global financial landscape. While Basel III has been calibrated primarily for advanced countries, many emerging markets and developing economies (EMDEs) are in the process of adopting it. They do so because they see it as being in their long-term interests; but at the same time, the standards pose new risks and challenges.

A new report from a Center for Global Development (CGD) Task Force, which we co-chair, examines Basel III’s relevance, advantages and challenges for EMDEs. The Task Force has advanced specific recommendations regarding components of Basel III that merit adoption or adaptation by financial authorities in EMDEs. We also make recommendations for the Basel Committee and other multilateral organizations. Specifically, the recommendations address: (1) the spillover effects arising from the implementation of Basel III in advanced economies, including by affiliates of foreign banks operating in EMDEs and (2) the potential unanticipated effects on financial stability, inclusion and the depth of local financial systems from the implementation of Basel III by EMDEs themselves.

The framework used throughout the report combines certain specific characteristics of EMDEs that distinguish them from advanced economies with a set of principles that aim to make Basel III work for EMDEs (see Figure 1 below). The five characteristics are variable access conditions to international capital markets, high macroeconomic and financial volatility, less developed domestic financial markets, limited transparency, and capacity, institutional and governance challenges. While not universal, these factors highlight the need for a differentiated approach to make Basel III work in EMDEs.

Taking these characteristics as a starting point, the Task Force’s analysis and recommendations build on three principles:

I.        Minimize the negative spillover effects of Basel III adoption in advanced countries.

III.      Minimize the trade-offs between financial stability and financial development. 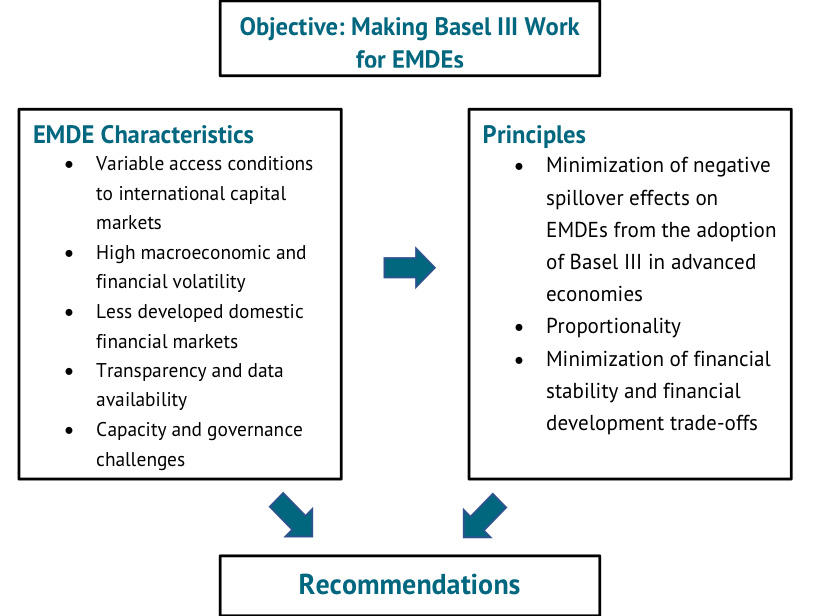 Spillovers effects from the adoption of Basel III by advanced economies

Spillover effects on EMDEs from the implementation of Basel III in advanced economies might come throughcross-border lending to EMDEs and through the creation of uneven playing fields between domestic banks and affiliates of global banks that operate in EMDEs. The first principle calls for containing these effects.

One recommendation is, therefore, to monitor spillover effects. Global regulators need to facilitate regular assessments of Basel III’s effects on EMDEs. Since the global financial crisis (GFC), there have been significant changes in the volume and composition of cross-border financing in EMDEs, including (a) a reduction in cross-border lending from global banks, including for financing infrastructure projects, (b) a heavier reliance by EMDEs on debt issuance and (c) an increasing role of South-South lending (lending from large banks in EMDEs to other EMDEs). While multiple factors have contributed to these developments, and it is not easy to isolate the role played by the adoption of Basel III in advanced economies, these three developments are nonetheless worthy of further analysis. If banking regulators in advanced economies cannot follow the example of the US Federal Financial Institutions Examination Council (FFIEC) by making bank-level data on foreign exposures public, then the Task Force recommends that The International Banking Research Network (IBRN) conduct broader and deeper analyses on cross-border spillover effects for EMDEs. We also recommend that the World Bank should follow up on a recent pilot and undertake more surveys on the impact of regulatory reforms in order to cover many EMDEs on a regular basis (every two or three years). We also recommend that the Financial Stability Board (FSB), in collaboration with the BCBS and other multilateral organizations, should take the lead in undertaking more case studies—in the form of evaluation assessments—as part of a surveillance scheme to identify these spillover effects as more EMDEs adopt the Basel Accord.

With regards to the concerning stagnation of global banks’ funding for infrastructure to EMDEs (see Figure 2 below), a sector in which EMDEs’ needs remain significantly large, we recommend that EMDE regulators and multilateral organizations increase efforts to develop infrastructure as an asset class. Although whether Basel III can be associated with recent developments is unclear, Basel III does have the potential to influence bank funding for infrastructure across multiple dimensions. And even though many of the reforms under Basel III are not yet in effect, banks may have already responded to expected future regulatory changes. These slow changes are especially relevant for long-term assets; banks price in future regulatory changes at origination even when those changes are to be phased in slowly. In this context, if project financing can be developed in a more standardized fashion (reaching agreement on the different dimensions of risk and their quantification), it may become easier to issue securities backed by infrastructure projects. If there is enough evidence on risks, lower risk weights for the computation of capital requirements might be appropriate for projects that comply with an agreed set of risk parameters.

Figure 2. Infrastructure Finance in Advanced Economies and EMDEs (US$ billions) 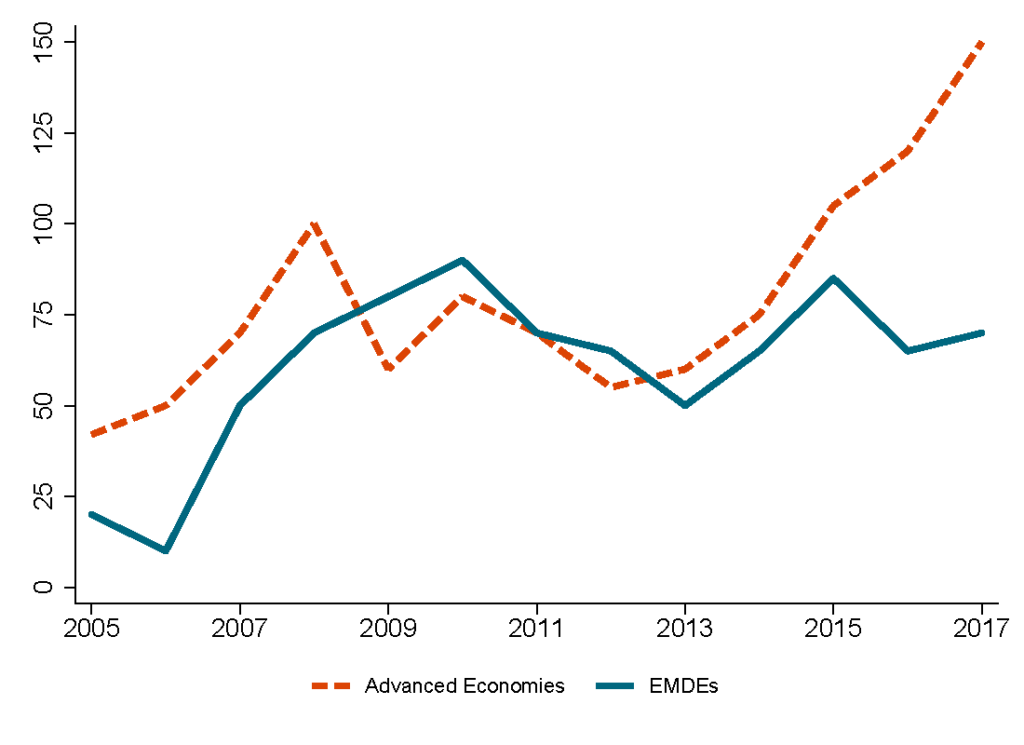 Source: Financial Stability Board. 2018. Evaluation of the Effects of Financial Regulatory Reforms on Infrastructure Finance. Note: The series excludes the oil, gas and mining sectors and refining transactions.

Potential effects from the implementation of Basel III by EMDEs

In our report, we emphasize that implementation of Basel III in EMDEs should be adapted to EMDE needs and capacities, in line with the principle of proportionality. We believe that proper specification and calibration of risks based on the characteristics of EMDEs would maximize the financial stability benefits of implementing the international standards.

For example, capital requirements in EMDEs are often “gold-plated”; that is, minimum capital requirements are set above those recommended by international standards to signal high regulatory quality. Based on the principle of proportionality, we advocate instead for the proper calibration of risk weights where data are available. With loan-level data, for example through credit registries, risk weights for credit exposures can be calibrated to country (or regional) circumstances, thus better reflecting actual risk. Supervisors can then compare these country-specific calibrated risk weights with those recommended by Basel III before deciding on the weights to be prescribed.

In addition, we recommend that EMDE regulators look beyond Basel III for regulatory tools since Basel’s capital and liquidity requirements may not be sufficient for EMDEs’ stability needs. High sensitivity to commodity prices (whether as exporter or importer), coupled with high sectoral concentration, can result in higher concentration on banks’ balance sheets and thus greater fragility. This fragility is exacerbated in financial systems that rely heavily on foreign-currency assets and funding. These characteristics call for cruder measures than those proposed in Basel III. Specific regulations could include lending and exposure restrictions, as already existing in some EMDEs, and could go beyond single-exposure limits and refer to sectoral, geographic or foreign-currency lending exposures as well.

With varying access to international capital markets, shallow interbank markets and high correlation in liquidity positions across banks, a systemic liquidity-management tool could be useful too. Specifically, EMDE banks could be required to maintain a fraction of liquid assets set aside to fulfill Basel III requirements in a centralized custodian, such as the central bank. Both monitoring and potentially publicizing available systemwide liquidity could be easier with these changes. And above all else, these regulatory tools could boost confidence and maybe even prevent another systemic problem from occurring in the first place.

The Task Force also recommends that regulators and multilateral organizations emphasize the Basel Core Principles (BCPs) for Effective Banking Supervision, instead of Basel III, as the primary signal of regulatory quality in EMDEs. While Basel III may not be fully appropriate for EMDEs in its current form, international investors often view its adoption as an important signal. Without neglecting the needs of investors, explicit efforts should be made to elevate the Core Principles over other standards to fulfill such signaling functions. Moreover, the Core Principles are a prerequisite for implementing Basel III, but in many EMDEs, there are significant deficiencies in meeting key provisions of the BCPs.

Looking beyond banks: financial development and the real economy

While financial regulation aims for financial stability, EMDEs would benefit more than advanced economies from further financial deepening. In line with the third principle, to minimize tradeoffs between financial stability and financial development, the Task Force recommends that efforts to develop local capital markets in EMDEs increase when banks are (correctly) subject to tighter requirements. Specifically, we highlight the importance of developing non-bank segments of the financial system, such as insurance companies, pension funds and public capital markets. Therefore, we recommend strengthening the developmental objective of regulation or supervision of nonbank segments of the financial system as a secondary objective.

Maintaining similar regulatory requirements for similar financial services, if the overall risk of the institutions offering the services is also similar, would ensure a level playing field across different segments of the financial system. This, in turn, would serve the purpose of avoiding both regulatory arbitrage and unnecessarily stringent regulation and supervision.

Additionally, coun­tries could create a “champion” for nonbank long-term finance in the regulatory and political landscape. Following the example of finan­cial-inclusion champions in some countries, a long-term finance champion would vet national policies and regulations to promote the deepening of long-term finance and launch policy initiatives in this area. Such a champion could be an informal arrangement or could take the form of a council of different regulatory and political entities; it would not necessarily have to be based on formal legal authority or grounded in law.

The Basel standards are an important safeguard for global financial stability and hence may help prevent future banking crises. These same measures, however, should not ignore the circumstances of EMDEs or dampen their growth prospects. Through these recommendations and others from the CGD Task Force report, we find that Basel III can work for EMDEs and advanced economies alike, truly becoming a global public good.

Fintechs Create an Impetus for Enormous Growth in sub-Saharan Africa