Top Posts
Can the Indo-Pacific Economic Framework Expand US Economic Influence in...
Banks Remain Uniquely Vulnerable to Sophisticated Cyber-Attacks
Western Banks Willing to Accept the Short-Term Pain of Russian...
Why the US Is Ramping Up Its Presence in Somalia...
How Technology Is Helping to Solve Global Supply-Chain Issues
UK Inflation Climbs to Fresh 40-Year High
Home Banking Capital Bank Mongolia Continues to Blaze New Trails in the Midst of Economic Instability
BankingCompanies

The Mongolian economy over the last five years has undergone unprecedented expansion. GDP grew by a staggering 17.8 percent in 2011 and was followed up by double-digit growth on a nominal basis until 2014, when growth slowed to 7.8 percent. During this period, inflation concurrently accelerated, and concerns have recently emerged over the country’s prominent decline in total Foreign Direct Investment (FDI). This deficit, coupled with the stark depreciation in Mongolia’s currency, the tughrik (MNT), has posed significant challenges to the country’s banking sector. The quality of commercial-banking assets in Mongolia has come under increasing pressure, growth in the total value of loans is slowing, and the stock of loans that remained outstanding past their due dates had more than doubled to 2.2 percent by the end of last year. 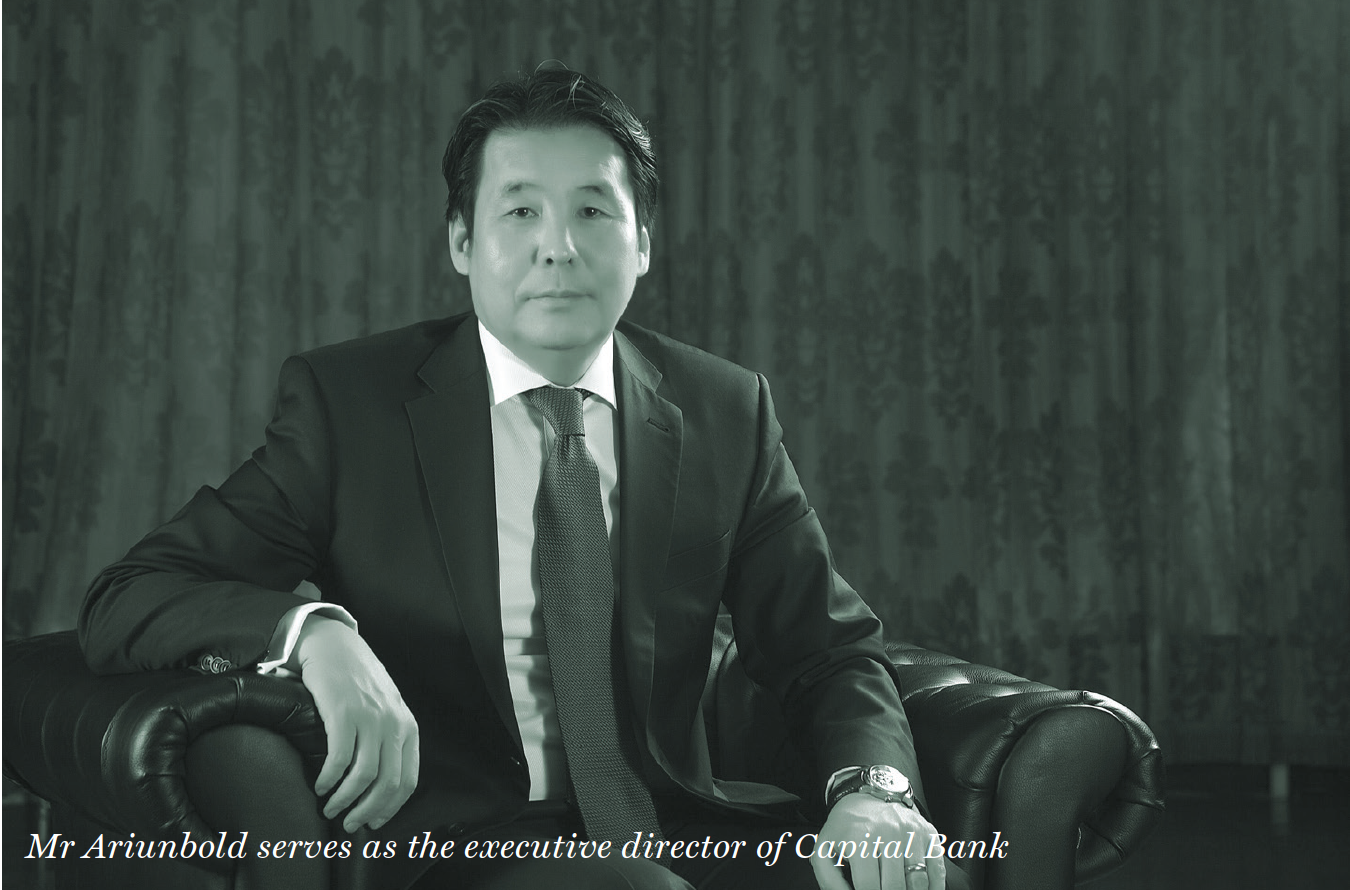 Capital Bank Mongolia (CBM), however, is admirably managing to prove its resilience in the face of such pressures thus far. By the end of 2014, CBM’s total corporate-loan provisions had increased by 39.16 percent, while the total of all outstanding loans on December 31 had jumped by 58 percent and reached 491.05 billion MNT from the end of 2013. Today, CBM can boast of its own range of branded products; a vast network of branches throughout the country, all of which are online and electronically literate; and several years of stable business growth.

A commercial lender and the country’s first to be 100 percent owned by Mongolians, CBM celebrates its 25th birthday this year. The modern roots of the bank can be traced back to 1990, when foundations were first laid through the establishment of the Industrial Shareholding Bank by a group of 16 various business entities. Over the quarter-century period, CBM has expanded operations in Mongolia considerably, gaining more than 500,000 permanent customers, employing more than 600 employees and establishing 90 branches and units throughout the country (withf those branches in capital city Ulaanbaatar).

Indeed, branch expansion has been at the centre of CBM’s plans in recent years, with the lender concentrating on delivering its services to as geographically diverse an area as possible. In terms of branch count, CBM is now among the top three banks in Mongolia.

Of CBM’s many core competencies, its specified goals pertaining to the development of small and medium enterprises (SMEs) deserve special mention. It is estimated that a substantial 82 percent of the approximately 55,000 companies in Mongolia in active operation at present are classed as SME operators, indicating the dominant role that the SME sector plays as an engine of growth in the country. CBM has more than 25 projects dedicated to such operators, some of which are in joint cooperation with the Mongolian government, and others with some of the world’s finest financial institutions, such as the Sustainable Livelihoods, SME Supporting and 40,000 Apartments projects with the World Bank; the Adventist Development and Relief Agency’s Micro Economic Development project; Mercy Corps’ Rural Agri-business Support program; and the Japan International Cooperation Agency’s project loan facility from the Japanese government.

Capital Bank organizes an open forum dedicated to small and medium-sized enterprises, and focuses on developing domestic production and national industries to contribute to the development of the country as well as to provide financial education to new business operators by promoting their inquiries and demands.

In 2011, Mongolia’s Ministry of Food, Agriculture and Light Industry also specifically chose CBM, from a multitude of commercial lenders, as a partner to create the SME Development Fund, a program that aims to “support SMEs, increase workplaces and to expand production” throughout the country. Environmentally friendly activity by SMEs is encouraged through the provision of more favourable lending terms. Last year saw 5 billion MNT in loans allocated to the fund by CBM.

This unwavering commitment towards Mongolia’s SME sector has earnt CBM a considerable amount of international recognition—in 2014, the lender was bestowed with the Best SME Bank Mongolia 2014 award by UK finance publication Capital Finance International. The award is given to leaders of the banking and financial-services industry, and is reportedly based on judgments contributed by prestigious global organisations including the United Nations, World Bank, International Monetary Fund, World Trade Organization and International Finance Corporation.

The bank has also ensured that its loan portfolio is well-diversified by allocating credit across a wide range of industries in order to support national industries. In 2014, the production of major construction materials was supported, loans were provided to 11 different entities as part of a policy initiated by the government and central bank—the “price-stabilizing sub-program of consumer products”—for the purposes of reserving meat, increasing the number of storehouses of food and food products, and developing intensive farming. The wool-and-cashmere industry is also given a sizeable amount of support.

A leader in corporate social responsibility

CBM has consistently prioritised its corporate social responsibility (CSR) and has become a shining example to its Mongolian banking peers of how a successful CSR policy is executed. The bank’s stated mission is to implement responsibility and contribute towards the development of Mongolia, and it has done this through a variety of profoundly important social programs.

Along with other leading institutions, such as the Mongolian National Chamber of Commerce and Industry, CBM co-founded the Organic Mongolia program, a fund designed to support Mongolian individuals and enterprises engaged in the production and servicing of organic products, but who are unable to post the collateral assets required to obtain bank loans. Those whose applications to the program are considered successful will gain eligibility for loans from the program’s fund, without the need to submit security. Last year, CBM assisted 25 such borrowers in total secure 196 million MNT worth of loans.

Through its choice of initiatives, moreover, it is clear that CBM places particular emphasis on the promotion of eco-friendly projects. The bank has become a specialist in organic production, primarily through its Organic Mongolia activities but also via its “Eco-tour” program, which aims to provide ecological education to schoolchildren in Ulaanbaatar. It has actively participated in the construction of mini-greenhouses; supported activities to plant trees and bushes, and improve seed-planting in cooperation with the Mongolia Project; and has become involved with the We Can Grow initiative, focused on building eco-parks, preserving historical heritages and improving landscaping.

Both the elderly and the youth of Mongolia are given special attention by CBM. On Mongolian Elders’ Day, all of the bank’s branches organize various activities for elder citizens, while on International Children’s Day it runs several youth-oriented promotions. CBM has also joined the Global Money Week movement, created by Child and Youth Finance International. Through this project, the bank has been involved in providing education on banking and finance to children from 140 schools across the length and breadth of the country.

The bank focuses considerably on sustainable financing while providing environmentally friendly, green financial products as one of its main goals. During this time in Mongolia, when the mining sector is dominate—foreign investors and business operators are concentrating in mining—Capital Bank is staying out of this sector to protect the environment, and is seeking to retain a green and healthy economy into the future.

Capital Bank’s board of directors consists of six members who have many years of experience and knowledge. The professional management team, under the guidance of its committees, is implementing appropriate governance according to international standards and maintaining information transparency by adhering to financial and operational open-principles and regularly publishing them via social media.

Furthermore, in accordance with its drive to provide access to financial services for as many Mongolians as possible, CBM has introduced a “talking website”, designed especially to help the visually impaired. Pregnant women, mothers with infants and the disabled needn’t get in line at CBM’s branches any more either, as the bank has recently approved priority access for these groups. CBM does not just provide such exclusive assistance to citizens within Mongolia’s borders; the bank has signed a memorandum of understanding with Korea’s Seran General Hospital that allows financial support to be provided to Mongolian patients there, while international credit-card holders will also receive a 10-percent discount on services provided by the hospital.

CBM is also impressing others as a bank with an appetite for international business, having formed key strategic partnerships and correspondent relations with many of the world’s leading financial institutions. Nostro accounts have been opened for dollar, euro, sterling, ruble and yen payments, with global banking giants including Japan’s Bank of Tokyo Mitsubishi UFJ, Germany’s Commerzbank AG, Russia’s International Bank for Economic Cooperation and Korea Exchange Bank. It has additionally made full use of Constar, a money-transfer service that operates in more than 150 countries of the world, thus allowing CBM to deliver banking services to overseas customers efficiently and providing them with access to Mongolia’s financial markets.

In the wake of rapid technological innovation in global banking, CBM has been ensuring that it adapts to the latest developments. 44 branches in rural areas are currently in the process of being connected with high-speed, fibre-optic Internet connections, while numerous call centres have recently been established to integrate the communication system efficiently. An electronic accounting system has also been set up, thus facilitating the automation of several key processes, including the registration of confiscated cards and disputed transactions. Additionally, software from Bancassurance has been implemented in order to provide insurance brokerage through its branches.

In its 2015 outlook, the Asian Development Bank has stated that it expects Mongolia’s GDP to markedly slow to 3 percent this year, as monetary and fiscal policies are tightened to combat spiralling inflation. In the absence of a stable economic environment, FDI is expected to remain relatively subdued, which will continue to constrain credit growth in Mongolia’s banking sector. CBM, however, has delivered stellar performance despite this increasingly bearish sentiment, and given its well-diversified loan portfolio; its dedication to SMEs, the biggest driver of sector growth in Mongolia; and its track record of stable, consistent growth over the last 25 years, the bank is well-positioned to overcome expected challenges.