Top Posts
How Technology Is Helping to Solve Global Supply-Chain Issues
UK Inflation Climbs to Fresh 40-Year High
Extended Reality and the Metaverse Are Leading Financial Services into...
Digital Currency: India’s Move Towards a Digital Financial System
Algarve Snapshot: The Growth of Overseas Buyers
Will London Have to Send More Banking Jobs to the...
Home Banking What Central Bankers Can Learn from Weather Forecasters
Banking

What Central Bankers Can Learn from Weather Forecasters 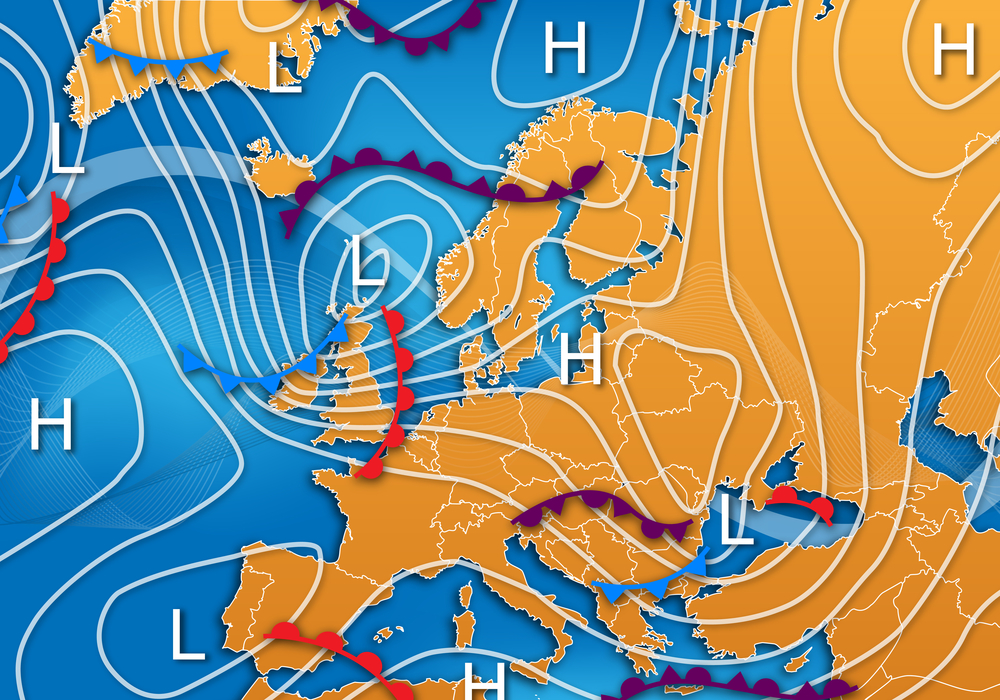 In determining the course of monetary policy, central bankers are ultimately concerned with fostering stable inflation and promoting economic prosperity. But monetary policy mainly affects the broader economy by influencing longer-term interest rates, exchange rates and prices of financial assets. And those financial conditions depend not only on the current setting of monetary policy but on the public’s expectations regarding the path of monetary policy going forward.

Thus, the effectiveness of monetary policy hinges crucially on the extent to which the central bank clearly communicates its economic outlook and contingency plans. Indeed, over recent decades all of the major central banks have made significant strides in boosting the transparency of their policy communications. Of course, communication is always a “work in progress” with plenty of room for further improvement. In contemplating such enhancements, central bankers can discover a number of remarkably valuable lessons from the current practice of meteorologists.

The conventional practice in central banking is to characterize the economic outlook in terms of a single benchmark path that is judged to be the most likely trajectory for the economy. Such projections are typically presented with an impressive degree of precision, including at least one decimal place for every economic indicator.

However, many central banks provide little or no quantitative information about the uncertainty surrounding their benchmark forecasts. For example, the US Federal Reserve regularly publishes detailed projections for US economic growth, consumer inflation and the federal funds rate, but it only provides broad qualitative assessments about the extent of uncertainty or the balance of risks. This sort of approach was largely developed in an era in which central bankers seemed worried that probabilistic characterizations of the outlook might be overly complex or confusing to investors. 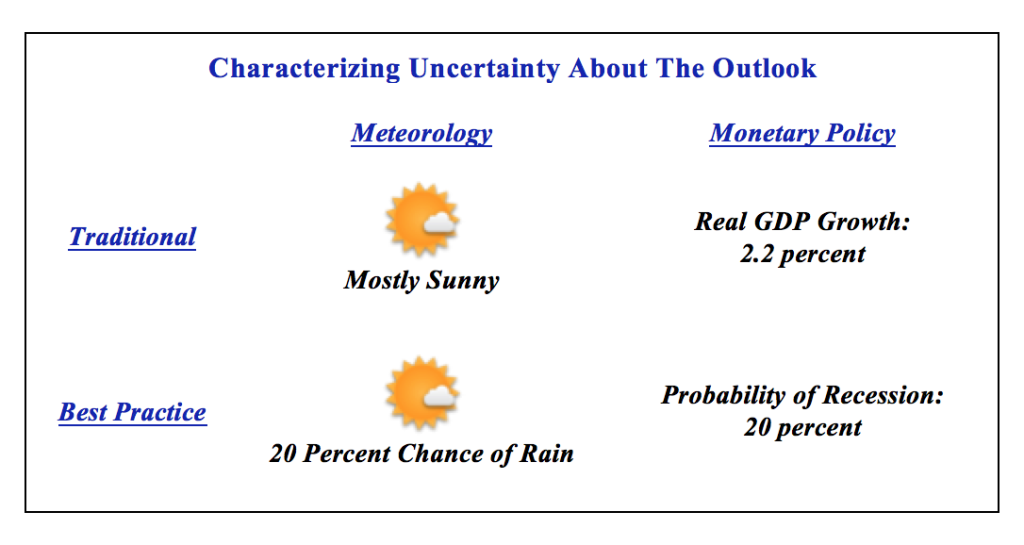 By contrast, weather forecasters make extensive use of probabilities in their communications to the general public. Indeed, descriptions of the baseline forecast (“sunny tomorrow”) fell into disuse many years ago and have been replaced by probabilistic assessments (“10 percent chance of rain”). Moreover, such assessments may seem fairly innocuous for some locales, such as Palm Springs or Death Valley. But quantitative information may be invaluable in other instances and absolutely crucial in the face of a potential hurricane or other severe weather conditions.

Going forward, central banks should move in a similar direction and make much more extensive use of probabilistic assessments in their monetary-policy communications. For example, rather than simply describing its inflation target as “symmetric”, the Federal Reserve could indicate the relative probabilities of inflation being above or below its target at each forecast horizon. And rather than merely describing the risks to the outlook as “nearly balanced” or “tilted to the downside”, Federal Reserve officials could specifically characterize the probability of the economy sliding into recession or deflation.

Most central banks produce their economic forecasts using a single macroeconometric model with judgmental adjustments and fine-tuning. This methodology may seem natural when the benchmark projection serves as the focal point for monetary-policy deliberations and communications. Unfortunately, such an approach can easily lead to complacency in assessing the economic outlook, because it does not necessarily involve any reexamination of the key assumptions embedded in the macroeconometric model or judgmental adjustment procedures. 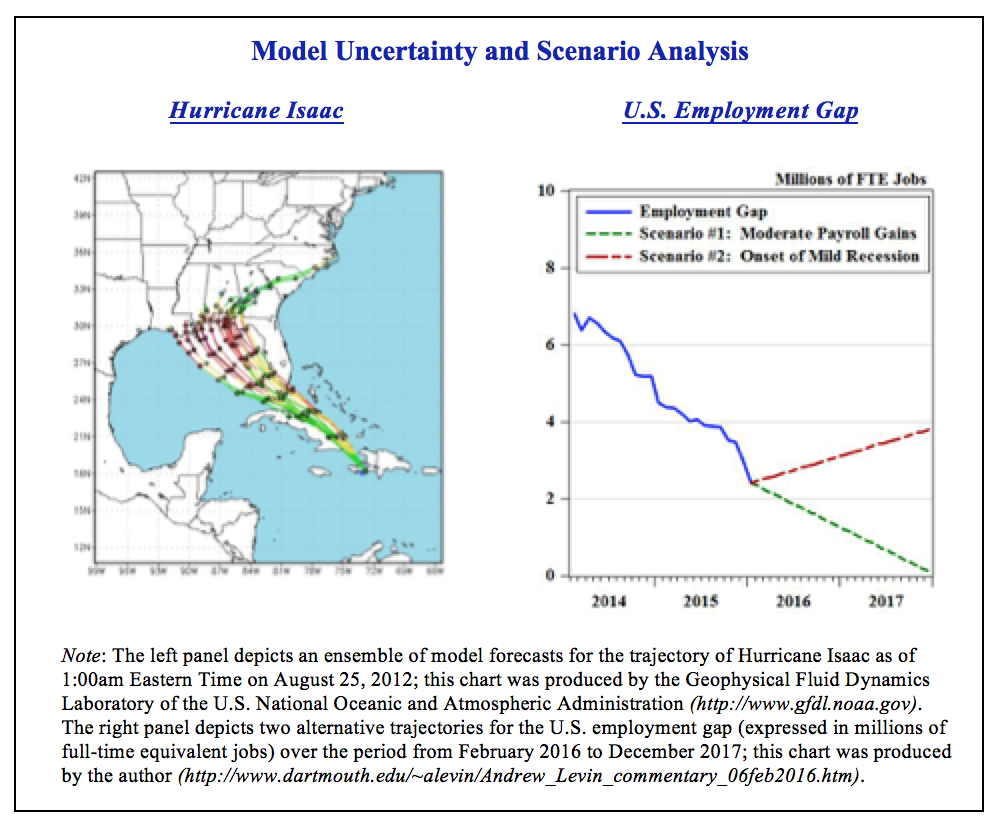 The standard practice of meteorologists is markedly different, especially in the face of severe adverse weather conditions. For example, in early 2015, some statistical models projected that an approaching blizzard would generate a once-in-a-century snowfall in New York City, whereas other weather models pointed to much milder outcomes that were similar to what actually materialized. Similarly, in projecting the track of a hurricane, forecasters routinely present several distinct trajectories corresponding to different weather models. Moreover, probability assessments may be impractical or useless in such circumstances, because the set of plausible models have such markedly different implications about a relatively unusual configuration of weather conditions.

Meteorologists tend to be remarkably modest and transparent in discussing the limitations of their methods and striving to learn from past mistakes in their forecasting and communications. For example, the January 2015 snow alerts for New York City inadvertently generated a lot of alarm and confusion. Shortly afterwards, US National Weather Service Director Louis Uccellini held a press call in which he acknowledged that his agency “did not do enough to communicate the uncertainty in the forecast….It is incumbent on us to communicate forecast uncertainty. We need to make the uncertainties clear….We’re going to review this very carefully and assess a different approach as we deal with these types of storms”.

Central banks should become equally transparent in acknowledging the limitations and shortcomings of their economic forecasts. Indeed, maintaining any pretense of undue confidence is likely to undermine the public’s trust. If actual macroeconomic outcomes deviate markedly or persistently from the central bank’s projections, then policymakers should provide a clear explanation of those forecast errors and indicate how their projection methods will be modified going forward. As in meteorology and many other fields, such “lessons learned” exercises can prove invaluable in improving the quality of the central bank’s economic assessments and its public communications.

Go to top
ABOUT THE AUTHOR
Andrew Levin is a professor of economics at Dartmouth College. He previously spent two decades on the staff of the Federal Reserve Board and was a special adviser to the Board on monetary policy strategy and communications from 2010 to 2012. He has also served as an adviser at the International Monetary Fund, and he has provided advice on these issues to a number of other central banks around the globe.
BankingCentral BankWeather Forecasters
0 comment 0 FacebookTwitterPinterestEmail
previous post