In mid-April, a draft of the legislation to repeal the Dodd-Frank Wall Street Reform and Consumer Protection Act—a law that has been branded by US President Donald Trump as a “disaster” that has made it difficult for businesses to get loans—was released. Entitled the Financial CHOICE (Creating Hope and Opportunity for Investors, Consumers and Entrepreneurs) Act, much of this 593-page replacement plan was credited as the work of the head of the US House of Representatives’ banking panel, Jeb Hensarling, who at the time said of the bill, “Republicans are eager to work with the president to end and replace the Dodd-Frank mistake with the Financial CHOICE Act because it holds Wall Street and Washington accountable, ends taxpayer-funded bank bailouts, and unleashes America’s economic potential”. By the first week of May, the Financial CHOICE Act was approved by the Republican-led House Financial Services Committee, which now means it will be sent to Congress to win approval in the House of Representatives and Senate.

Republicans argue that the Dodd-Frank Act, the financial-reform law passed under the Obama Administration, is slowing economic growth, particularly due to the costs of compliance and lending curbs imposed by the law. According to Hensarling himself, “This economy is poised to take off, but it’s not going to take off as long as Dodd-Frank in its current form remains on the books”. Trump, meanwhile, promised to “dismantle” Dodd-Frank during his election campaign, but efforts to fully repeal the law have all but been abandoned since then; nevertheless, financial institutions are still hoping that numerous changes are made to the law, while Republican lawmakers are aiming to implement significant changes to how the government monitors major banks for financial risk.

In response, therefore, the Financial CHOICE Act aims to repeal about 40 provisions of Dodd-Frank. The main objectives of the new bill include allowing banks to opt out of Dodd-Frank if they hold enough cash, as well as limiting federal stress tests of major banks to once every two years. Banks will be given the choice to maintain an equity-liability leverage ratio of 10 percent, in return for exemption from specific Dodd-Frank requirements including minimum ratios of equity to risk-weighted assets as prescribed by international banking standards. The reasoning behind such a provision is that a failing bank with sufficient equity would pose zero risk to the taxpayer; under any situation of stress, however, the only potential party to suffer would be the shareholder.

The bill would also prevent the US federal government from having the authority to declare a bank “too big to fail”, and to dismantle it before it collapses and triggers another crisis. Furthermore, Dodd-Frank’s Orderly Liquidation Authority, which was initially included as a backup bankruptcy procedure for when financial authorities attempt to safely resolve bankruptcy issues of failing banks during periods of financial stress, would be replaced by a new bankruptcy process that aims to protect financial markets from such a fallout. The Financial CHOICE Act additionally seeks to reform the Consumer Financial Protection Bureau (CFPB), which oversees mortgages and credit cards, by rolling back its authority and ensuring that the president can fire its director at will.

Arguably the brightest aspect of the new proposed legislation, however, is the ostensible benefits it would provide for America’s community banks. In terms of the high compliance costs and heavy administrative burden, Dodd-Frank has largely been viewed as being excessively harsh on smaller banks that did little to exacerbate the financial crisis. Considering Dodd-Frank was largely aimed at reducing risks from the larger banking culprits of the crisis, it is broadly agreed that smaller banks—a group representing more than 6,000 US lenders, of which 4,800 hold less than $1 billion in assets—have not been given due consideration by the law. Financial authorities such as the Federal Reserve’s Daniel K. Tarullo, who recently stepped down as a governor at the central bank, have observed the vital need to “differentiate prudential regulation and supervision based on the varying nature of the risks posed by different groups of banks”.

The new bill, therefore, will allow banks with less than $1 billion in total assets to opt into less stringent requirements in relation to the reporting of their financial positions. In turn, the amendments will remove almost 40 percent of the 2,400 data points that banks are currently mandated to provide to regulators on a quarterly basis. According to Hensarling, the new bill provides “desperately needed regulatory relief for our community banks and credit unions…. That’s why community banks and credit unions, who sometimes don’t always agree, have joined together in support of the Financial CHOICE Act”.

Whether the act reverses the long-term decline of community banks, however, remains to be seen, given that they face increasing competition not only from the bigger banks, but also from the recent growth of online lenders looking to capitalise on the financial-technology revolution. 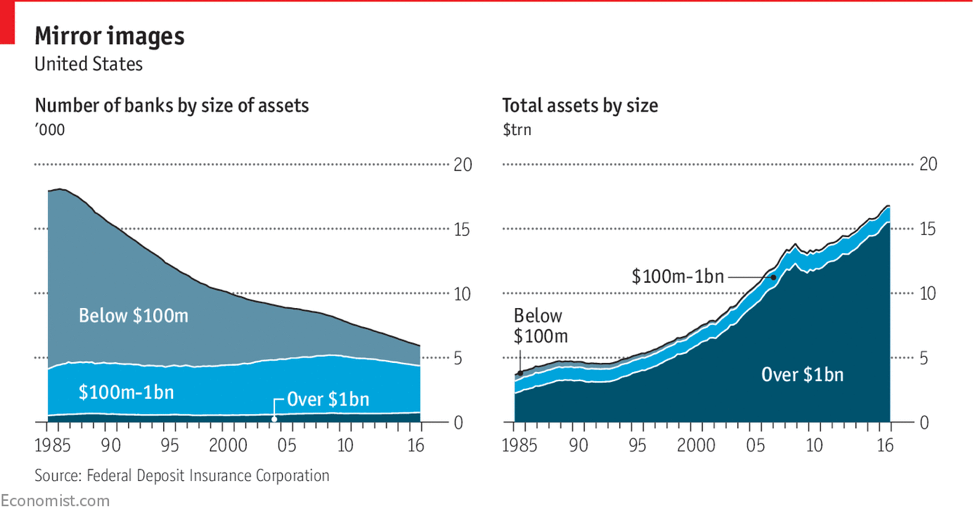 One of the major sets of provisions contained within the Financial CHOICE Act is how the country’s main financial regulatory body, the Securities and Exchange Commission (SEC), goes about regulating the markets. As far as being tougher on Wall Street is concerned, the legislation does include some key supportive provisions, namely a proposed increase in the maximum penalty amount the SEC can impose for certain violations, as well as including a set of penalties that triples the fines for repeat offenders. However, such amendments are unlikely to have much bearing on banks earning billions of dollars in profit. The bill would also direct more of the SEC’s administrative cases to be filed before a federal district court, which would allow defendants more rights to require dismissal of such cases, as well as greater ability to discover evidence and more access to a jury.

Should such measures be adopted, therefore, it would signal that Congress will play a bigger role in overseeing the decision-making process of the SEC. In turn, this suggests that the Financial CHOICE Act is less trusting of the regulatory agency’s effectiveness, with some suggesting that it is considered to be operating in an overly aggressive manner. Indeed, one provision within the legislation would require an assessment of the SEC’s enforcement policies and practices, which would then be reported to the congressional committees overseeing the agency. By requiring increased access for those being investigated by the SEC, moreover, the ultimate result may be that the total number of cases are reduced within a given time period.

According to the US’s top Republican, Senate Majority Leader Mitch McConnell, however, the Financial CHOICE Act is unlikely to be approved due to the likely failure of his party to secure enough opposition party votes. In a recent interview with Bloomberg, McConnell admitted, “I’d love to do something about Dodd-Frank, particularly with regard to community banks but that would require Democratic involvement…. I’m not optimistic. So far, my impression is the Democrats on the banking committee believe that Dodd-Frank is something akin to the Ten Commandments”. Although Republicans hold majorities in both the House and the Senate, they continue to lack the 60 votes required to break a filibuster (whereby a bill continues to be debated until the time limits are reached), and many expect Senate approval to be difficult to obtain.

Indeed, despite the bill being approved by the House Financial Services Committee, all of the Democrats on the panel voted against the bill. The concern from the opposition party surrounding the Financial CHOICE Act is that it would create many of the same conditions that caused the financial crisis and triggered a massive economic downturn in the US, as well as much of the rest of the world. The opinion of the congressional panel’s senior Democrat, Maxine Waters, for instance, is that it is “a deeply misguided measure that would bring harm to consumers, investors and our whole economy”. Waters also described the bill as “rotten to the core and incredibly divisive”. As such, Democrats are keen to continue resisting any changes to Dodd-Frank that could purportedly benefit Wall Street, including the proposed weakening of the CFPB and the elimination of the Volcker Rule, which prohibits banks from conducting certain speculative investment activities from proprietary accounts, and limits their ownership of and relationship with hedge funds and private-equity funds.

However, there may well be agreement on some issues proposed within the new legislation; for example, easing the burden on small banks by exempting them from the Volcker Rule. Also, solid bi-partisan support appears to exist for raising the minimum threshold at which banks are deemed to be systemically important, from $50 billion under current Dodd-Frank rules to possibly $100 billion or $150 billion. The current threshold—above which banks are subject to stress-testing—is widely considered by both parties to be too low, especially considering that many of the smallest banks pose negligible systemic threat at most. The threshold is also presently preventing merger activity among small banks, as the merged entity would likely have an asset level exceeding the $50 billion threshold.

Some of the regulations will also be able to be amended without necessarily enacting new laws, moreover. Back in February, Trump ordered Treasury Secretary Steven Mnuchin to conduct a review of the law and report his conclusions within 120 days, with Trump himself stating that his administration would likely cut large swathes of it. The latest news coming from the White House, however, suggests that the Dodd-Frank repeal will be done in stages, and at a slower pace than Trump initially planned. Part of the reason for the delay has been due to the fact that the government has yet to completely fill all the required vacancies following the transition of power from the Obama Administration, meaning that there simply has been insufficient personnel to complete the review by the June deadline. It is expected that once the review is completed, however, the Department of the Treasury will provide a list of the rules that could potentially be changed during the first stage, such as capital adequacy and limits on speculative trading. During the later stages, issues surrounding capital markets, clearinghouses, derivatives, insurance, asset management and financial technology are expected to be addressed.

Overall, whether the Financial CHOICE Act will be an improvement upon Dodd-Frank is yet to be determined with any conclusive proof. Nevertheless, extensive research has been conducted on both acts, such as the publication in March from academics at New York University’s Stern School of Business and law school entitled “Regulating Wall Street: CHOICE Act vs Dodd-Frank”, which provides an exhaustive comparison between the two. The authors concluded that neither act gets to the heart of systemic problems in US financial regulation. Nonetheless, Dodd-Frank, albeit an excessively onerous law, has made the industry safer. Conversely, they argued that since proprietary trading was not the cause of the financial crisis, the Volcker Rule could effectively be eliminated without any significant problems resulting.

Thus it seems likely that it will be an uphill challenge for the Financial CHOICE Act to be ultimately approved by Congress, while delays to the reviews on Dodd-Frank commissioned by Trump are also not ideal for those hoping for a swift rollback of the law’s most burdensome regulations. Unless enough Democrats can be convinced to change their votes in Congress, then according to McConnell, the US banking industry will be “stuck with whatever the administration thinks it can do on its own to modify the impact of Dodd-Frank”.

The Role of IMBs in the US Mortgage...