Top Posts
Challenges Remain, But There Are Opportunities to Be Had in...
Interview with Mr. Olukayode Pitan, Chief Executive Officer and Managing...
Commodities Outlook for 2023
The Value of Cash in a Time of Crisis: How...
The US-Africa Leaders Summit: Fostering a Closer Relationship with the...
Three Key Sectors in Which to Invest in 2023
Home Banking China’s Banks and the Problem of Bad Debt
Banking

China’s Banks and the Problem of Bad Debt 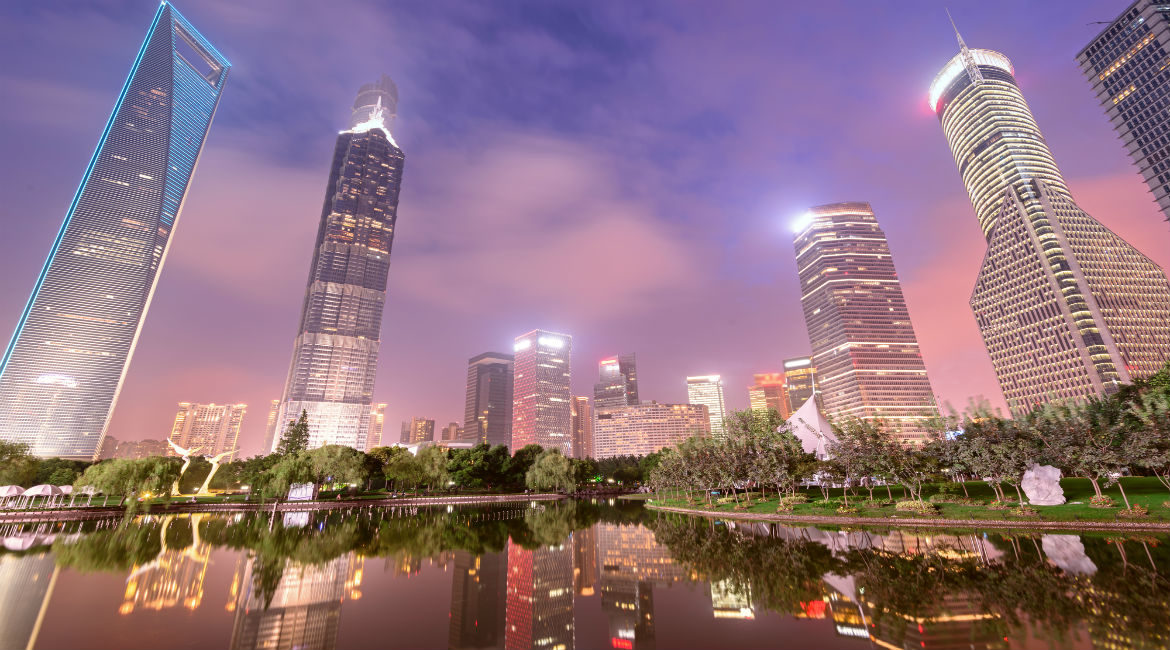 It is no secret that China has been facing serious problems related to its mounting debt levels. The growing pile of bad loans, especially from the country’s corporate sector, has raised red flags at many of the world’s leading research institutions. The International Monetary Fund (IMF), for instance, observed in June 2016 that China’s total debt stood at 225 percent of gross domestic product (GDP), while corporate debt amounted to a similarly hefty 145 percent of GDP. The IMF’s first deputy managing director, David Lipton, also acknowledged that corporate debt in China remained “a serious and growing problem that must be addressed immediately and with a commitment to serious reforms”.

Late last year, moreover, the Bank for International Settlements (BIS) stated that China was within three years of a serious financial crisis. The bank reported that the country’s credit-to-GDP gap—a measure that the BIS uses to record the accumulation of excessive credit, and ultimately, the likelihood of a financial crisis—had exceeded 30 during 2016’s first quarter. Any figure greater than 10 indicates that a crisis is likely in less than three years. Underlining the severity of China’s problems, second-placed Canada was recorded at a mere 12.1 in comparison.

China’s public infrastructure sector is widely believed to be the biggest culprit of bad-debt accumulation. Provincial governments are especially responsible for initiating new infrastructure projects to publicly indicate the progress being made by their respective regions, all the while sitting on a pile of bad loans and accumulating further toxic debt. According to data from China Bond Rating, local government bond issuance in 2016 was worth 6.05 trillion yuan, which was a staggering 57 percent more than the previous year. Such a strategy remains commonplace, and there appears to be little evidence that it will change anytime soon.

In turn, China’s banks have become increasingly resigned to writing off their customers’ bad debts—a problem that is being compounded by their seemingly continual voracious appetite to lend. Indeed, banks extended a record 12.56 trillion yuan of loans in total during 2016. A recent report by PwC (PricewaterhouseCoopers) and the China Banking Association calculated that bad loans from commercial banks amounted to a staggering $220 billion in 2016, which is now sounding the alarm bells for bankers and regulators alike. The report included a survey of nearly 1,800 bankers, in which 90 percent of respondents considered both risk management and pressure from bad loans to be their biggest challenges. By the end of September, the country’s five biggest lenders posted combined losses of 274 billion yuan from such write-offs, while the average of their nonperforming loan (NPL) ratios had risen to 1.72 percent, from 1.69 percent during the previous quarter. As such, losses from write-offs climbed 54.6 percent from a year ago.

Furthermore, the China Banking Regulatory Commission showed that the overall NPL ratio for China’s commercial-banking industry had hit an 11-year high of 1.4 trillion yuan by May, 1.75 percent of total bank lending. It has since shown a marginal improvement but continues to remain a concern. 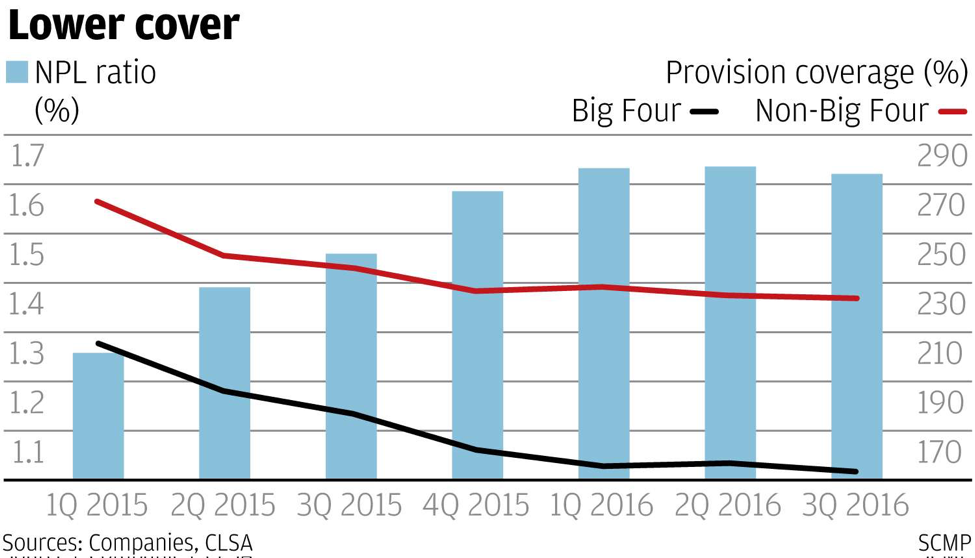 Some analysts, however, believe that the true ratio could be upwards of 15 percent, and perhaps even as high as 35 percent, with banks using creative methods to move certain problem loans off their balance sheets. Such moves are believed to often result from local government pressure, in a bid to prevent large-scale corporate defaults and job losses.

Indeed, the problems at the biggest banks pale in comparison to those being endured by China’s smaller, rural lenders. For instance, Guiyang Rural Commercial Bank, located in China’s southwestern province of Guizhou, raised much investor concern in November when its rating outlook was downgraded, mainly as a result of a spike in its overdue-loan ratio, which hit a whopping 30 percent of its total-loan book. Short-term borrowing costs have thus soared for China’s rural commercial banks, which account for 13.4 percent of the total value of assets held in the country’s banking system.

However, Standard & Poor’s (S&P) believes that China’s banks will avoid a full-fledged debt crisis this year. Although the leading ratings agency continues to maintain a negative outlook on the sector, it expects a banking crisis to be avoided “in light of another year of GDP growth exceeding 6 percent, and a change in the credit mix to relieve asset quality”, according its analyst Qiang Liao. However, Liao also asserted that China’s current debt-growth trajectory “is not sustainable”.

Clearly, China’s ballooning debt poses an ever more painful headache for the central government. That’s not to say that China’s authorities themselves have not been aware of the problem for some time; indeed, the last few years have seen several attempts at bringing spiralling debt under control. In 2015, for instance, a debt-swap initiative was established, aimed at lower interest payments on provincial government loans, whilst also extending their maturities. The Ministry of Finance is also expected to provide investors with easier access to local government bonds.

Today, however, concerns are being raised that the government is continuing to encourage its debt-fuelled fiscal stimulus, invariably at the expense of banking-sector stability. Indeed, this appears to be the opinion of the banks themselves. Many institutions have recently lowered their loan-loss provisions, not as a result of any material improvement in bad-debt levels, but rather as a way to boost their results on balance sheets and maintain profit and dividend levels, with the advice to do so reportedly coming from Beijing. According to Citigroup, for instance, “banks still face pressure from the government to maintain flat earnings growth, which is unlikely to be achieved without further lowering NPL coverage ratios”. Analysts at investment research firm Bernstein believe that the country’s largest state-owned lenders have been given approval to continue operating on lower levels of bad-loan coverage, in order to “help the institutions to produce smoother earnings trends in the near term”.

S&P has previously stated that China’s banks may need to raise up to 11.3 trillion yuan ($1.7 trillion) of additional capital by 2020 if ballooning corporate debt translates into a spike in bad loans. Even under a base-case scenario, banks would be expected to need $500 billion. Should credit growth continue unabated then S&P anticipates that the problem-credit ratio at Chinese banks, which stood at 5.6 percent at the end of 2015, will sharply deteriorate to between 11 and 17 percent by 2020. The agency also expects that the government will allow credit growth to continue until 2018 at the earliest, after which it will intervene. Given that the important National Congress of the Communist Party of China is being held in this year’s final quarter, and only takes place once every five years, the government is not expected to enact many policy measures that could trigger undue volatility. As such, little will be done in 2017 to prevent the country’s worrisome debt burden from becoming even heavier.

IT Outsourcing—Driving Technological Innovation for the Banking Sector?