Top Posts
Challenges Remain, But There Are Opportunities to Be Had in...
Interview with Mr. Olukayode Pitan, Chief Executive Officer and Managing...
Commodities Outlook for 2023
The Value of Cash in a Time of Crisis: How...
The US-Africa Leaders Summit: Fostering a Closer Relationship with the...
Three Key Sectors in Which to Invest in 2023
Home Banking CMB: A Client-Led Private Bank
BankingCompanies

In an ever-changing regulatory environment, Compagnie Monégasque de Banque (CMB) generated almost €1.2 billion in credit volume—25 percent more than the previous year—as well as a phenomenal 38 percent boost in total assets to 12,041 billion euro. Shareholders’ equity stands at 700,280 million euro. Such remarkable growth is a testament to CMB’s unique but highly effective approach towards client service, as well as to an entrepreneurial spirit that underpins significant innovation within the bank in recent times.

Its position within Monaco as the private bank with the highest standards of service, moreover, remains largely unrivalled.

Fully owned by the leading Italian investment bank Mediobanca, Monaco’s CMB is among the world’s true private-banking luminaries. It was founded in 1976, and over the 40-plus years that it has been in business, it has cemented its reputation as one of the region’s most forward-thinking financial institutions, and as a fierce proponent of forging meaningful, lasting client relationships that endure for years, if not decades. Its position within Monaco as the private bank with the highest standards of service, moreover, remains largely unrivalled. For instance, the bank is prominent in real-estate financing; it can lay claim to launching the first ever real-estate fund in Monaco; and it was the first financial institution (around 10 years ago) to create an investment vehicle that exclusively invested in environmental friendly and sustainable companies. Given the significant global shift in focus towards climate-friendly banking solutions in recent years, it is clear to see that CMB is a bank that is well ahead of the curve.

With CMB now entering its third generation of clients, it remains fully committed to servicing families and helping them to grow their wealth. To succinctly outline its core priorities, the bank has designed a “pyramid of values”: 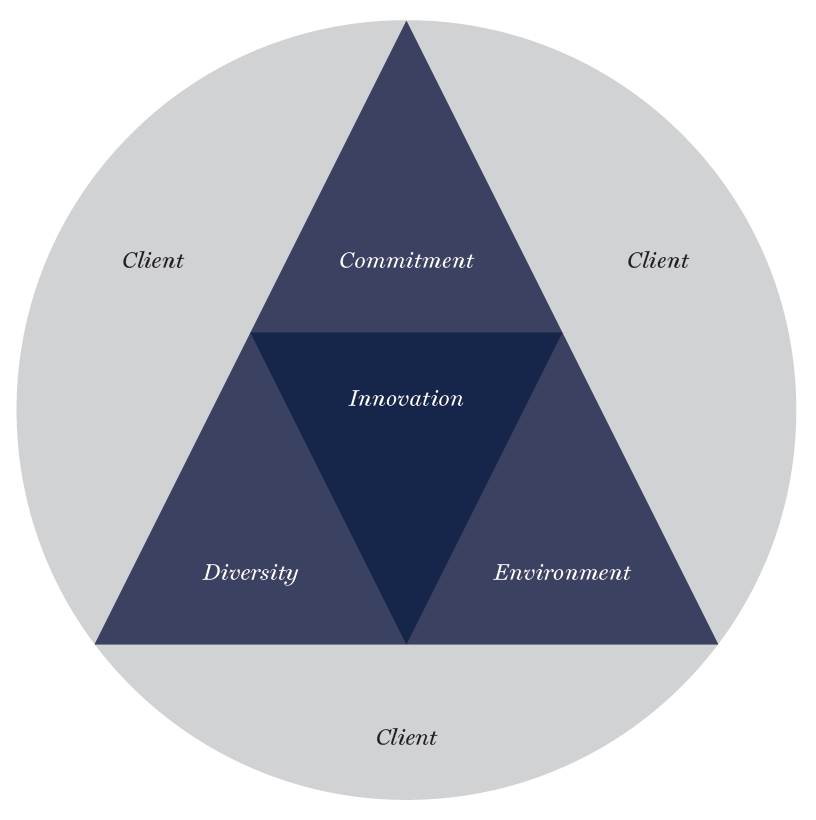 Of utmost importance are the bank’s clients. Putting their financial needs first over the long-term forms the basis of the bank’s operations, and is reflected in its slogan, “Generating value for generations”. Indeed, the bank clearly recognises that knowing one’s clients, their personal financial goals and the issues they are facing is absolutely crucial in determining the ultimate quality of a private bank’s service. According to CMB, a bank needs to be able to anticipate a client’s needs, offer advice and accompany the client with a highly tailored, custom-designed service.

Observing and respecting the diversity that exists within CMB’s client base, as well as throughout the bank’s workforce, is also a key feature of its overall outlook. Indeed, around 120 nationalities are resident in Monaco, with CMB’s client base being fully representative of this diversity. Given that no two client-bank relationships are the same, therefore, CMB places considerable importance on personalising its service as much as possible, and being responsive to specific needs, in order to build long-term, trust-based partnerships. This approach ensures CMB has a particularly high proportion of client relationships that go beyond merely one-time interactions; rather, value is unfailingly provided to clients on a consistent, ongoing basis.

CMB’s desire to provide commitment over the long-term is reflected not only by the number of lasting client relationships the bank has managed to develop, but is also abundantly demonstrated through the numerous development strategies it has devised, which enable the bank to disseminate its expertise throughout its client base. Projects have been created that facilitate development for each major client segment; for instance, the Investments of Passion project involves a series of seminars in which clients can learn directly from a range of experts how to value and understand those markets in which they have particular interest, such as fine wine, art and collection cars. Next Generation is a similarly imaginative creation whereby exclusive events are organised for the bank’s younger clients and prospects aged 25 to 45 years, through which they can network with other like-minded individuals and exchange ideas. The revolutionary Academy Women & Finance initiative was also launched last year, which educates the bank’s female clients to take on a lead role regarding the management of family wealth. Over the course of a year, they are given invaluable insight from experienced professionals concerning financial-management topics before applying this theory in the form of managing their own virtual portfolios. Then there’s the latest addition to the project suite—the Philanthropy Academy aims to create synergies between participants and philanthropic stakeholders within Monaco, a city-sate known internationally for its humanitarian actions.

In addition to such frequent displays of originality when approaching customer service, CMB also outperforms the competition through its keenness to adopt innovative digital solutions into its business model. While many banks in the space tend to offer similar products and services—and thus tend to face the same challenges, such as an ageing customer base and competition from non-traditional tech companies—CMB is focused on bucking this trend by implementing a digital strategy that offers customer-driven digital solutions and leverages innovation and data to create value. As an example, the bank will launch its much-awaited mobile-banking application at the beginning of next year, which will allow clients to have real-time access to their accounts, as well as provide them with the same functionality that they currently have on CMB’s existing e-banking platform. The introduction of such an app will be a first for the private-bank industry in Monaco.

Much of CMB’s recent success can be attributed to the leadership of its chief executive officer, Mr. Werner Peyer, whose many years of expertise in private banking with several first-class international private banks have helped to substantially boost CMB’s fortunes in recent times. He identifies “technical” and “emotional” skillsets as being the two core competencies a private bank must develop in order to achieve success in private banking. The emotional aspect may prove a surprise to some, but Mr. Peyer emphasises how vital it is for CMB bankers to actually listen to their clients. Rather than being “product sellers”, therefore, bankers are considered “relationship builders”; and thus by reframing CMB’s strategic, long-term approach as one that is focused on clients’ needs, rather than on individual transactions, Mr. Peyer has managed to successfully transform the decision-making process within the bank. Moreover, as diverse as the bank’s client base is, Mr. Peyer has sought to ensure his employees have a similarly diverse background—not just in terms of nationality (of which there are more than 20 within the bank alone), but also culture, languages and risk attitudes, which allows CMB to more suitably match bankers with individual clients.

Indeed, CMB devotes a remarkably large proportion of its resources to the development of human capital—one astonishing statistic is that at any given time, more than 20 percent of the bank’s employees are receiving training to develop new skills and stay well-informed of the latest regulatory developments. CMB’s career-development policy ensures the entire cross-section of the workforce is well-supported, which in turn provides a springboard for employees at all levels to confidently embark on self-development opportunities. For instance, in-house education is available to those who seek to obtain the CMB Diploma, a three-year training programme in finance, economics and law. In addition, internal-evaluation methods have been recently transformed, in order to ensure employees are judged on the things that matter—namely, performance, instead of personality, education or personal skills. The bank also hosts its annual CMB Management & Leadership Seminary, at which all directors and managers participate in a two-day programme, complete with a range of guest speakers.

Looking towards the future, CMB has a handful of key strategic goals that it hopes to achieve over the next couple of years, most of which are focused on strengthening the needs within key client segments, as well as aiming to cultivate organic development. The bank has successfully upgraded its IT (information technology) platform, with a specific focus on bolstering its risk-management, compliance and digitalisation capabilities, in close cooperation with the Group. The enhancements are enabling CMB to offer clients high-performance, responsive and secure applications for their financial and wealth-management projects. As far as the bank’s position within the local market is concerned, meanwhile, Mr. Peyer recently acknowledged the large wave of consolidation that has been taking place. Having completed a number of acquisitions in Monaco–including the recent takeover of part of the business of CFM Indosuez Wealth, the 1996 acquisition of Banca Commerciale Italiana Monaco, the 2006 purchase of ABN-AMR.O Monaco and the 2008 acquirement of Capitalia Monaco—he views CMB as one of those “consolidators”; and with more than 30 banks still operating within the small Mediterranean city-state, further acquisitions being made is not out of the question, either.

But at the same time, the bank seems keen to prevent its growth from creating unwanted distance between itself and its clients. It aims to continue having close proximity to its client base, which should in turn guarantee one of the most essential characteristics required of a private bank: strong reactivity; continuing to possess such a quality will allow clients to continue having convenient access to their personal account managers. Its financial strength and overall solidity – two of the most crucially important assets of any private bank – also underline both the commitment of CMB employees and the abundance of confidence that clients can place in the bank. Moreover, the bank’s local origins, the stability of its management and the desire to remain comparatively small will also ensure it can make decisions and approve new measures quickly. And as long as clients remain as satisfied with CMB’s service as they have been in recent years, the bank will continue to greatly prosper going forward.

Robo-advisory: Assessing the Threat, and How Banks Should Respond in a Time of Increased Transparency Requirements