Top Posts
Why the Status of the Fifth-Largest Economy Is a Job...
Syrian Economic Outlook Dims as Internal Conflict, Resource Theft and...
Unwinding the Unconventional Monetary Policy in Japan
Three Significant Payment Trends in 2022
Recessions Hurt: Does the Data Show That the World’s Major...
Every Organisation Should Be Aware of Invoice Scams
Home Banking The Co-operative Bank of Kenya: transforming the lives of millions
BankingCompanies

The Co-operative Bank of Kenya: transforming the lives of millions 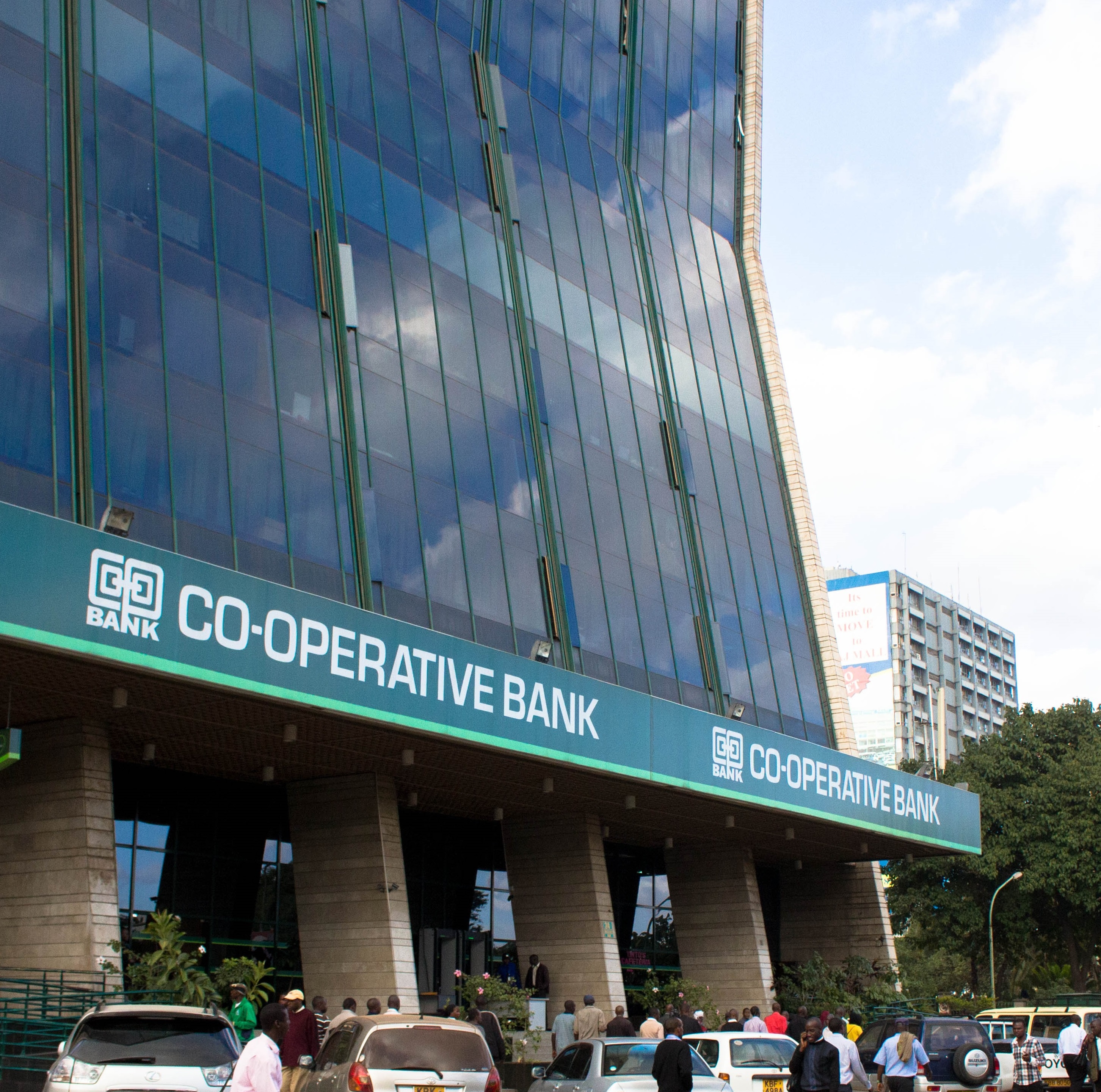 The Co-operative Bank of Kenya (Co-op Bank) is one of Kenya’s fastest growing banks. It is currently one of the five largest financial institutions in the country. The bank has been in business for over four decades, and its history is an interesting one, to say the least. After recovering from substantial losses in 2000, Co-op Bank saw an impressive turnaround and has been on the upswing ever since. The bank’s CEO, Dr. Gideon Muriuki, continues working hard to make Co-op Bank the leading Kenyan bank by providing innovative financial services to customers, thereby benefiting stakeholders, the community and Kenya’s economy.

Registered under the Co-operative Societies Act in 1965, Co-op Bank did not actually see its first year of business until 1968. The bank grew and remained stable until it suffered a major setback in 1998. In that year, the bank’s head office was bombed in a terrorist attack apparently targeted at the neighbouring Nairobi Embassy of the United States of America, and thereafter needed a complete relocation. While the bank recovered from the tragedy, the year 2000 saw a significant drop in performance, its annual report showing a KES two billion loss. It became obvious that a turnaround strategy would be absolutely essential to help the bank retreat from the decline and generate the means for a recovery. 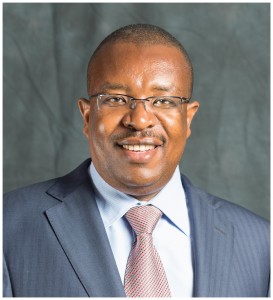 Despite the difficult circumstances, the year 2001 saw considerable improvement. That year on 1 March, Dr. Gideon Muriuki became the company’s Managing Director. At the end of the fiscal year, the bank reported a 60% reduction in their 2000 losses. In the year 2002, the turnaround was official when the bank reported a profit of KES 103 million. During the following years, the bank saw amazing growth. By the end of 2007, Co-op Bank recorded a profit of Kes 2.3 billion and declared an eight per cent dividend, its highest payout by far in years.

In 2008, Co-op Bank resolved to incorporate under the Companies Act. This qualified the bank for listing on the Nairobi Stock Exchange, which occurred in December of 2008. Since then, the bank has seen incredible growth. The number of accountholders and branches skyrocketed. The bank’s rapid and steady growth prompted its inclusion in the Nairobi Stock Exchange 20-Share Index in 2009. In both 2010 and 2011, the bank received recognition in the Financial Times of London magazine as Best Bank in Kenya. In 2011, the bank also received the Best in Corporate Governance Award at the Annual Financial Reporting (FiRe) awards. In 2013, the bank received recognition as the Most Green Bank at the 2013 Energy Management Awards.

Co-op Bank has always focused on making improvements to the community, Kenya’s economy, and the welfare of Kenyans in general. This is evident in the many programmes the bank has initiated over the years.

In 2011, the bank acquired a long-term, 70 million euro loan from the European Investment Bank (EIB). The bank used this loan for onward lending to small- and medium-sized enterprises. Likewise, in 2012, the International Finance Corporation (IFC), a private sector lending branch of the World Bank Group, gave Co-op Bank a loan of 60 million USD. The funds from this loan were meant to boost the bank’s small- and medium-sized enterprise finance programme, to promote economic inclusion in East Africa, and to support Kenya’s many agricultural projects. Co-op Bank has procured the necessary funds to support Kenya’s many small businesses and entrepreneurs, recognising that they have a significant impact on the nation’s economy as a whole. 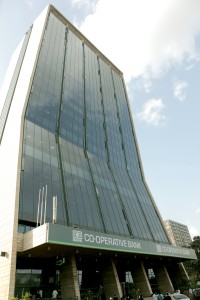 Co-op Bank achieved the fastest turnaround time for energy efficiency and renewable energy financing for small, medium, and large enterprises. It also has a long list of green energy financing projects planned for the near future. This bank is helping all different types and sizes of enterprises to go green and help protect Kenya’s environment.

In 2013, Co-op Bank selected Aurionpro’s iCashPro Internet Banking Suite as a platform for its online banking. This internet banking suite provides superior online services for its customers. Online statements, reporting capabilities, fund transfers, and electronic payments all allow members of Co-op Bank to access services through multiple channels, making banking easier and more convenient than ever before. This change proved the bank’s commitment to bringing banking closer to Kenya and its people.

Dr. Gideon Muriuki’s contribution to the growth and success of Co-op Bank is undeniable. Dr. Muriuki was, in fact, awarded the Honourary Degree of Doctor of Business Leadership for the successful turnaround of the bank and entrenching the unique co-operative model in Kenya’s financial market. Under his watch, the bank not only recovered from an adverse non-performing loan record, it has also greatly increased its customer base. Since Dr. Muriuki’s appointment as CEO, the bank has seen customers increase from 125,000 to 4 million. Its branch network also grew from 30 branches to over 130, thanks to his exemplary performance as a business leader. Dr. Muriuki also contributed to the bank’s reforms that led to its listing in the Nairobi Stock Exchange.

DR. MURIUKI EXPRESSED THAT WHILE HE WAS HAPPY TO SEE THE GOOD FINANCIAL PERFORMANCE OF THE BANK, HE WAS EVEN HAPPIER TO BE ABLE TO WORK WITH AN INSTITUTION THAT CONTRIBUTES TO IMPROVING THE WELFARE OF THE MAJORITY OF THE KENYAN PEOPLE.

Perhaps what is most touching, though, is Dr. Muriuki’s attitude towards the bank’s progress. During the awards ceremony where he was honoured for his business accomplishments, he expressed that while he was happy to see the good financial performance of the bank, he was even happier to be able to work with an institution that contributes to improving the welfare of the majority of the Kenyan people.

Co-op Bank has also gone to great lengths to reach out to Kenya’s underprivileged students. CEO Dr. Muriuki mentioned that education is one of the most costly expenses for families, while at the same time is the means that is most likely to liberate them from poverty. In 2014, Co-op Bank increased its secondary school scholarships to just over 2,800 students in the next four years. Bright but financially disadvantaged children from all over Kenya can receive the scholarships. Co-operative societies identify the children that qualify for the programme and take their names to a regional forum where delegates decide which children are most deserving of a scholarship. In each region, the four students who perform the best during their secondary school education are awarded full scholarships for their university education. The Co-operative Bank Foundation, which funds the scholarship programme, began in 2007. As of 2014, the programme has helped over 5,000 bright children to receive an education that would not have otherwise received.

Co-op Bank is an excellent example of a truly successful co-operative business. Although the bank has seen difficult times, with the help of CEO Dr. Gideon Muriuki, the bank went from reporting huge losses to reporting excellent profits in the span of just a few years. The financial success of Co-op Bank pales, however, when compared to the initiatives the bank has taken, and continues to take, to improve the welfare of Kenyans and their communities. The implementation of technology-driven business platforms has made banking more accessible and more convenient than it has ever been for the people of Kenya. Loans given to small and medium-sized enterprises, scholarships for underprivileged students, and green energy financing projects are evidence of Co-op Bank’s interest in people as individuals. The bank’s international expansion will bring the same benefits to people outside of Kenya. These achievements are all helping make advances toward a healthier and more prosperous future for Kenya and beyond.

The Game is Afoot

Kudos to my CEO

Sky is the limit for us in co-op bank. There is still room for improvement-excellence is a journey, not a destination.

Thumbs up my CEO

…..for the lord gives wisdom….this is the Lords doing .Receive all the glory lord for this far you have been our Ebenezer! Watch and continue guiding our CEO to move this Bank to greater heights.

Kudos our CEO and co-opbank as a whole.

Am proud to be associated with this institution as an account holder and an employee.

“We are you”congratulations to my C.E.O for the bank ceo of the year-Africa you are a true leader and may God bless you

Our MD is doing an excellent job.Keep it up!

Nice to hear such accolades bestowed to co-op bank,it’s encouraging even as we continue stepping out in faith.

The co-operative bank model is impressive. I like the humility of our CEO

This is what God can Do. Congratulations Dr. Muriuki and all Fellow co-opbank team
indeed the Lord has done it for us

Kudos Dr. Muriuki and our team as a whole. May God continue supporting us to impact the world.

Congrats to Dr. Muriuki. It always amazes me what God can do when we put Him first. This is what our CEO has done & results we do see.

This is surely the KINGDOM BANK through which God will bless his people of Kenya !

Everyday that I wake up, I make a prayer for more success of coop bank with all its management. It’s the bank that has transformed my life through the coop foundation

Kindly, work on interest on loans serviced from payroll. When an employer deducts money and remits it late it should not affect the client/customer because this is a trend which is impoverishing the poor. Once deducted, its the duty of the employer to remit yet clients are still subjected to sinking accounts. Kindly help the poor.

I will always remain grateful on what Co-opBank did to my life.God bless Co-opFoundation.