Top Posts
Designing the Next-Generation Banking Treasury Management
Is the US Finally Warming to the Possibility of Creating...
Enabling the Drive Toward Green Finance with Technology
Why Have Tin Prices Struggled in 2022?
The Devil We Thought We Knew
How China Has Managed to Avoid the Inflation Bug
Home Banking Does Foreign Monetary Policy Drive Australian Banks’ Wholesale Funding Costs?
Banking 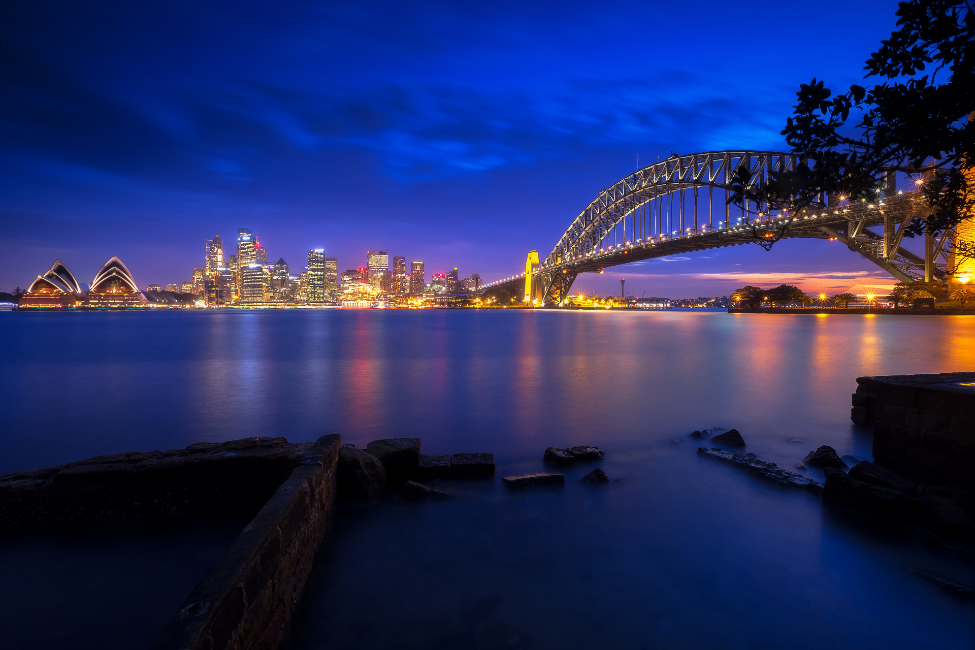 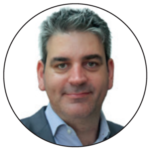 Wholesale funding (WF hereafter) has recently emerged as one of the most important sources of financial intermediaries’ funds in many countries. Approximately 30 to 40 percent of the total funding of the largest four banks in Australia is made up of WF, according to the Australian Prudential Regulation Authority (APRA). (The APRA is a legislative body of the Australian government and the prudential regulator overseeing the financial-services industry, including authorised deposit-taking institutions, insurance and superannuation [pension fund] companies.)

The WF ratio in Australia is higher than that in Canada, the United States, Japan, Switzerland, Sweden, the United Kingdom and the eurozone (see Table 1). WF markets comprise both short-term and long-term WF instruments. Short-term instruments include NCDs (negotiable certificates of deposit), ECP (Euro commercial paper), Eurodollar deposits and brokered deposits and are largely anchored to monetary-policy rates. Longer-term funding instruments are largely priced off` longer-term government bond yields and include EMTNs (Euro medium-term notes), covered bonds/notes with floating and fixed coupon rates, and securitization. Although many countries rely heavily on domestic and international WF markets, little is known about whether foreign monetary policy is a driver of bank WF costs—in other words, whether Australian banks “import” international monetary policy through the WF channel. (We used WF issues made by Australia’s largest banks over the 2000-2015 period to answer this question.)

Traditionally, banks have financed their daily funding operations by drawing customers’ demand deposits. Historically, this source of funding has been relatively cheap compared with others, thus making them a superior form of financing despite their fragility (Diamond and Rajan [2001])1Journal of Political Economy: “Liquidity risk, liquidity creation, and financial fragility: A theory of banking,” Diamond, D. W. and Rajan, R. G., 2001, 109(2), Pages 287-327. Moreover, banks have also relied on other traditional methods of raising short-term funds, such as NCDs (negotiable certificates of deposit), overnight cash and funding from the repo markets (repurchase agreements), which are considered short-term options available for funding.

Financial deregulation of Australia’s banking system during the early 1990s resulted in higher levels of competition and increased the number of financial services and products available. Deregulation has also opened new windows for banks to raise debt funding over traditional deposit funding through domestic and international WF markets. Furthermore, alternative funding sources such as securitizing lending portfolios (in particular, mortgages) and, more recently, covered bonds have also become more prevalent. Thus, it is essential for banks, investors and policymakers to understand the drivers of WF costs better. During the early 2000s, the banks’ costs of funds were largely anchored and moved in line with the cash rate set by the Reserve Bank of Australia (RBA), reflecting stable conditions in financial markets. However, since the financial crisis, and given the fact that banks now rely on more nuanced sources of funding, including WF from foreign markets, the connection between the cash rate and overall bank funding costs has become more opaque (Davies, Naughtin and Won [2009])2Reserve Bank of Australia (RBA): “The impact of the capital market turbulence on banks’ funding costs,” Davies, M., Naughtin, C. and Won, A., RBA Bulletin, June 2009, Pages 1-14.

We focused on Australian data in the analysis for four reasons.

Firstly, the Australian WF-to-liabilities ratio is the highest in the world; therefore, there is a sufficient number of WF issues that are needed in the analysis. In addition, Australian banks have historically raised WF from a wide range of countries, including the United States, Europe, Japan and Hong Kong.

Secondly, the Australian banking sector is one of the most concentrated and safest in the world, helping researchers collect and analyze WF issues. The industry is dominated by four large banks—namely, Commonwealth Bank of Australia (CBA), Westpac Banking Corporation (WBC), National Australia Bank Limited (NAB), and Australia and New Zealand Banking Group Limited (ANZ). These banks are collectively known as the Big Four and account for around 90 percent of the domestic market share in terms of revenue.3IBIS World: “IBISWorld Industry Report K6221a,” October 2015 The four banks are similar in size (their individual market shares vary between 21.8 percent and 26.0 percent) and riskiness. Their credit ratings are AA, according to Fitch and Standard & Poor’s, and Aa2, according to Moody’s. The banks are not only big nationally but also on a global scale. Based on market capitalization, they were among the 25 largest banks in the world in 2016.4Relbanks: “World’s Largest Banks.” (Accessed on November 6, 2016) All four banks have a similar long-term funding approach and emphasize the diversity of funding across currency, maturity, investor type, markets (retail and wholesale), geographical location and debt product types.

Thirdly, the financial sector in Australia is more stable than in other developed economies and did not suffer any bank defaults or bail-outs during the recent financial crisis; thus, the WF costs are not impacted by the default of any bank.

Table 2 compares the domestic banking sector’s total amount of WF in Australian dollars between the Big Four (upper tier) and the smaller (lower tier) regional banks, indicating that the four largest account for around 90 percent of total WF instruments on issue. This highlights the Big Four’s heavy reliance on funding from short and long-term WF markets. For many years, Australia’s high level of investment-capital requirements, particularly from the mining industry, relative to savings has been financed by net foreign capital inflows.

In general, banks hedge exchange-rate and interest-rate risks using cross-currency swaps when borrowing in foreign currencies. (This view is supported by articles in the media [e.g., McKenna {2016}] and by private conversations with bank employees.) Even afterwards, the borrowing costs are lower than if they issued WF securities denominated in Australian dollars. Given most banks’ financial assets are in Australian dollars (e.g., residential mortgages), it is unlikely these institutions are inclined to issue WF in foreign markets in order to match their assets denominated in foreign currencies. The investment-grade credit ratings issued by Standard and Poor’s, Moody’s and Fitch that have been consistently maintained by Australian banks, even during the financial crisis, have helped them utilize WF markets as an attractive alternative funding source.

Our analysis revealed that domestically issued WF exclusively in Australian dollars does depend on the policy rate, which is set by the RBA. The impact is indirect—that is, through the yield of Australian government bonds. Taking the entire data sample, which includes WF issues in five currencies (in total, 1,711 WF instruments), the impact of the RBA cash rate is insignificant. This is likely because the majority of WF issues in our sample mature in two to five years, and only 5.8 percent of all WF issues (and only 0.5 percent of WF issues denominated in Australian dollars) have maturities shorter than two years. In general, we find that WF instruments denominated in foreign currencies (from an Australian perspective) depend on foreign monetary policy. Of all the debt issues in our sample, 21 percent are in AUD. Therefore, the costs of a large portion of Australian banks’ WF do not depend on the RBA policy rate but are impacted by the decisions of foreign monetary authorities. It can therefore be stated that Australian banks “import” international monetary policy through the WF funding channel. This could be another source of the contagion and spillover effects between Australian and foreign financial markets.

Foreign transmission of monetary-policy spillovers may indeed be compounded by recent capital reforms adopted by the APRA and the RBA, such as the Net Stable Funding Ratio (NSFR) and High-Quality Liquid Assets (HQLA) in response to the Basel Committee on Banking Supervision, developed by the BASEL III capital framework. In particular, the NSFR forces banks to hold increased levels of longer-term stable WF. Given Australia’s historically low saving ratio and, consequently, a banking sector that relies heavily on international funding, this will invariably force domestic banks to tap large and deep offshore WF markets, especially as offshore markets have a greater capacity to absorb larger issues and longer maturities, allowing for Australia’s banks to meet the NSFR requirements, particularly at times when financial markets are replete with liquidity. However, implementation of the NSFR in Australia may prove too restrictive given the inadequate available sources of longer-term domestic WF.

As such, this would force an overreliance on offshore WF, which is deemed riskier than domestic WF because it involves more rollover risk. Rollover risk is more pronounced in international WF markets for two reasons. First, in times of liquidity stress, investors tend to restructure their portfolios away from foreign markets and towards domestic investments. Second, banks that issue WF securities in foreign currencies do not have access to central bank liquidity support in that same currency (Bellrose and Norman [2019]). In terms of macro-economic determinants, we find that WF costs do not depend on the VIX (CBOE Volatility Index) and exchange rate.

This research has enhanced our understanding of the disconnect between domestic monetary policy and funding costs of the Australian banking sector. The results are of high importance to regulators and policymakers. 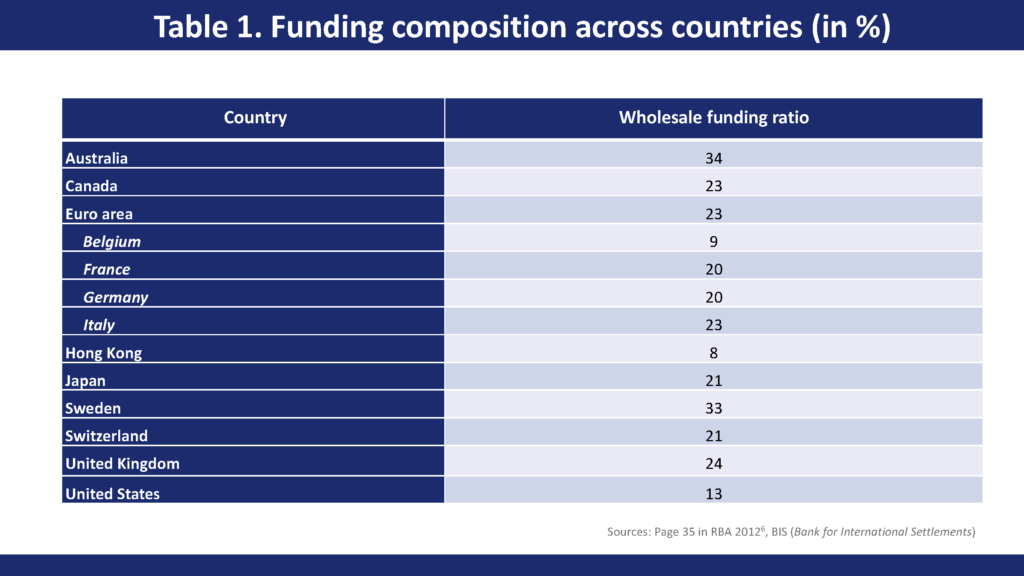 This table shows the wholesale funding ratio, expressed as a share of funding liabilities (total liabilities including equity less derivatives and other non-debt liabilities), across different countries. Funding ratios across banking systems are subject to definitional differences; for example, certificates of deposit are classified as wholesale funding in all countries except Canada and the United States, where these instruments are eligible for deposit insurance. 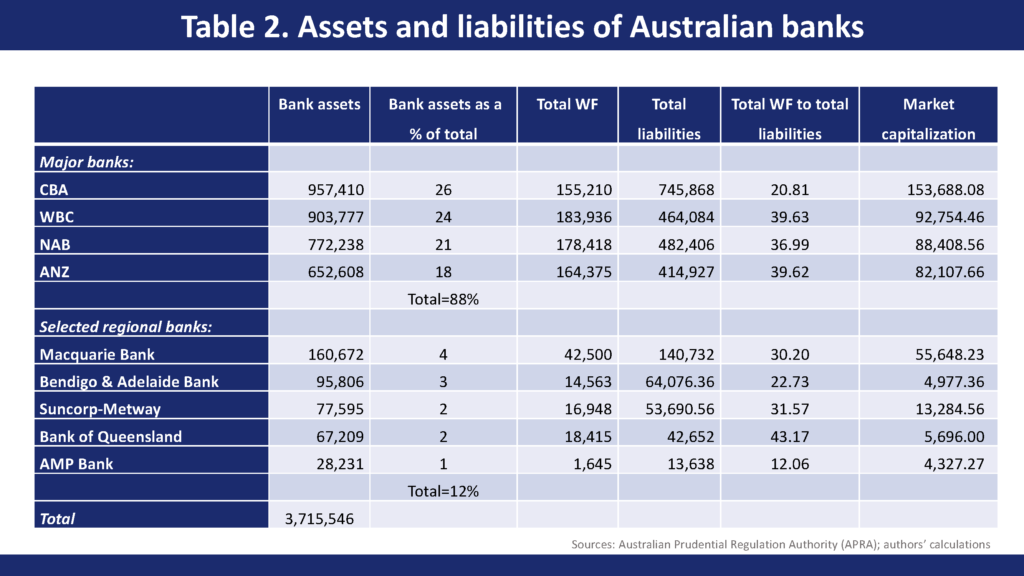 This table shows the assets and liabilities of Australian banks (in A$ million). Total liabilities include equity capital.

ABOUT THE AUTHORS
Dr. Simon Cottrell is a Finance Lecturer and the Research Degree Coordinator for Finance and Property at the University of South Australia’s Business School. He is a member of the Centre for Markets, Values and Inclusion (CMVI) and an allied member of the Financial Planning Association (FPA). Before joining UniSA, Simon coordinated postgraduate and undergraduate courses in corporate finance and financial markets at Flinders University, Federation University Australia and the Australian Institute of Business.

Dr. Sigitas Karpavicius is an associate professor of finance at the University of Adelaide Business School, which he joined in 2015. Dr. Karpavicius received his Ph.D. from the University of New South Wales in 2011. Prior to his Ph.D. studies, he obtained an MA degree in Economics and Management Science from Humboldt University in Berlin and conducted research at the Economics Department of the Bank of Lithuania.

Gold Buying Once Again on the Agenda for Central Banks