Top Posts
Interview with Mr. Olukayode Pitan, Chief Executive Officer and Managing...
Commodities Outlook for 2023
The Value of Cash in a Time of Crisis: How...
The US-Africa Leaders Summit: Fostering a Closer Relationship with the...
Three Key Sectors in Which to Invest in 2023
Three Key Stocks in Which to Invest in 2023
Home Banking Euro Area: Quo Vadis R*?
Banking 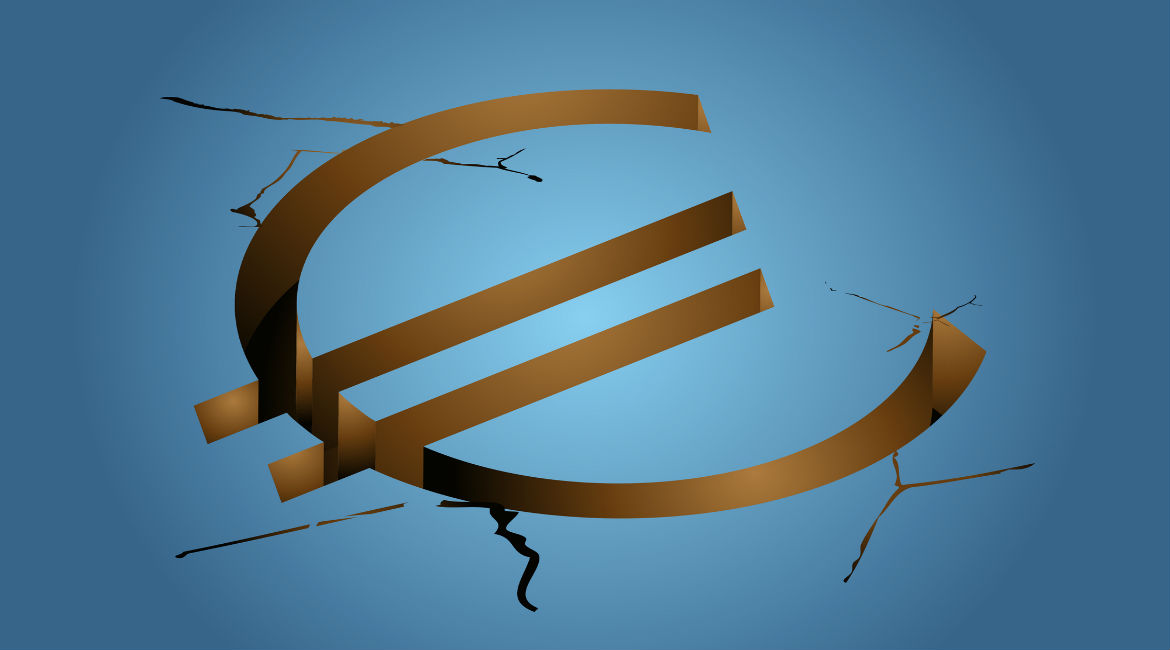 Despite a very long economic cycle, interest rates across the world remain very low. Due to worries about the health of the world economy, most central banks have yet again postponed any plans for monetary tightening. The universe of government bonds with negative yields is above $17 trillion and close to record highs. In general, different asset valuations suggest that the market is confident that rates are not going to rise for a very long time. And the market has good reasons to assume so. Due to ageing, the natural rate of interest (R*) is likely to be dragged down by about one percentage point (pp) in the euro area over the next couple of decades before it starts to recover as the composition of savers-dissavers changes. To see how interest rates are affected by potential growth and demographics in the euro area, we have conducted a scenario analysis. This clearly illustrates that many of the interest-rate determinants lie outside of the central bank’s mandate. The success of governments in implementing productivity-enhancing reforms is the key to determining the direction of interest rates.

What is the natural interest rate, and how does it relate to monetary policy?

The natural rate of interest was first defined by Knut Wicksell more than a century ago. According to his definition, it’s a rate that should equalise the returns in the real and the financial markets and, therefore, be neutral in terms of inflation. A recent popular way of estimating R* was developed by T. Laubach and J.C. Williams (2003), who define it as an intersection of investment savings (IS) and Phillips curves. The IS curve represents the equilibrium state, where total investment equals total savings, while the Phillips curve ought to represent the business-cycle fluctuations. According to the prevailing definition, much rests upon the natural rate of interest equalising the saving and investment rate and, therefore, marginal returns inthe goods and money markets, ensuring full employment and stable prices. The problem is that the natural rate is unobservable and can be estimated only by using a range of methods; the estimates are often very unreliable, and some even question if a single number is capable of putting all of these variables in equilibrium. This is a valid concern, knowing that dual-mandate central banks often see their objectives as contradicting each other. 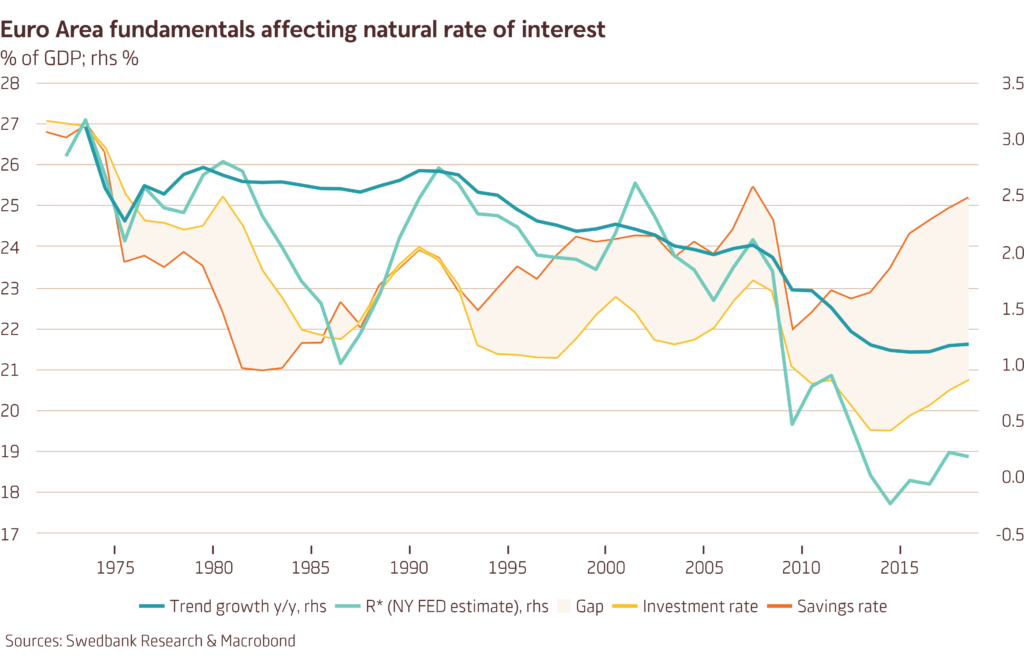 Determinants of the natural rate

Various estimates show that the natural interest rate has been declining in the past decades; several fundamental factors are at play in determining the natural rate of interest. One of the main drivers of the R* decline has been ageing in the advanced economies. Ageing affects the natural rate of interest via at least three channels. First, the declining working-age population effectively increases capital stock per person, lowers the marginal product of capital, decreases demand for capital and reduces the investment rate. Second, higher life expectancy increases the stock of capital as individuals need to save more for longer in order to meet their cash-flow requirements for retirement. This could be further exacerbated by low interest rates because, at the individual level, the saving rate must increase to meet the set financial goals if real rates are close to zero or even negative. Finally, increasing the share of old people in society reduces the stock of capital, as retirees spend their savings to support their lifestyles (C. Carvalho, A. Ferrero and F. Nechio, 2016). Overall analysis shows that interest rates could already be depressed by as much as one pp due to ageing (Claus Brand, Marcin Bielecki and Adrian Penalver, et al., 2018)and could decline by a further 0.5 to 1 pp by 2030 (Andrea Papetti, 2019). Currently, the first two channels are stronger; however, the strength of the third channel should grow over time as the proportion of retirees increases sufficiently to reverse the saver-dissaver dynamic (Andrea Papetti, 2019). 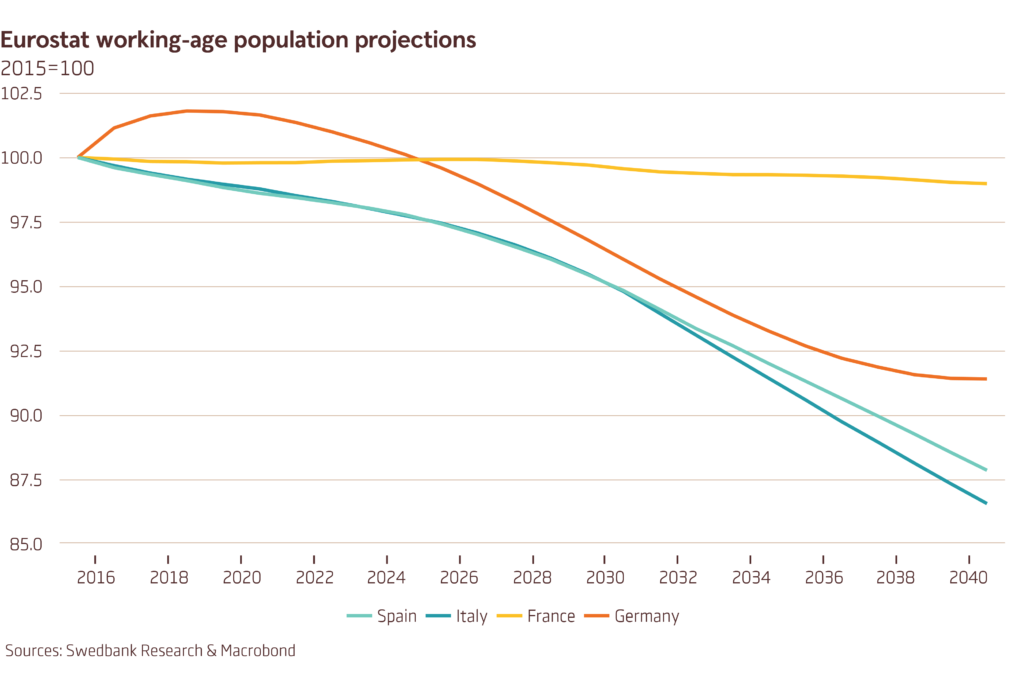 The risk preference of savers is also an important determinant of natural interest. If savers become more conservative in their risk appetite, the demand for risk-free assets increases and, therefore, pushes down on the natural real interest rate, and vice versa: if the risk appetite increases, they are willing to lend to companies demanding a lower risk premium. The preference of risk can be both trend and cyclical. In ageing societies, the risk appetite typically decreases as savers are more inclined to engage in wealth-preservation as opposed to wealth-growth strategies. The business cycle also affects risk preferences; the negative shocks of economic crises can induce strong, rapid risk-off sentiment that pushes the natural interest rate down in the short term.

Potential growth is one of the main determinants of R*. It defines the possible aggregate return in the real economy and thus defines one side of the equation. Trend growth has been declining in advanced economies for the past several decades, together with inflation and interest rates. Potential growth mainly depends on labour supply and quality, capital deepening and total factor productivity—an umbrella term for improvements in technology, organisation, legislature, etc. Typically, as advanced economies reach the steady state, total factor productivity is the main source of sustainable growth.

Where is the natural rate headed?

Demographic trends are inert and can be predicted fairly accurately. There are many different opinions as to how trend growth could develop over time. Negative demographic trends weigh on potential growth, and there are worries that Japan-like levels of 0.5-percent trend growth are the future of Europe. On the other hand, a lot of industries are facing disruption from 5G wireless technology and the Industrial Revolution 4.0; much infrastructure investment will be needed to meet environmental goals that will require large-scale investment as old capital stock becomes obsolete; trends such as the onshoring of manufacturing could boost the productivity of ageing Europe; and the robotisation of the economy could make trend growth less dependent on demographic trends.

In order to illustrate how the natural rate could develop, a simple vector autoregressive model was constructed for some scenario-analyses purposes. The model is simply an illustration of how demographics and trend growth affect R*, leaving aside other important determinants of interest rates, such as changing risk appetite and fiscal policy. A Federal Reserve Bank of New York natural rate of interest is estimated, using the Holston, Laubach and Williams (2017)model; the savings rate and investment rate are used as endogenous variables, while demographic trends and potential growth are imposed exogenously. The model analyses how the variables moved together historically; endogenous variables are determined within the model; trend growth acts as a shock and stays constant, determining the level of the interest rate. Demographic projections determine the shape of the curve. 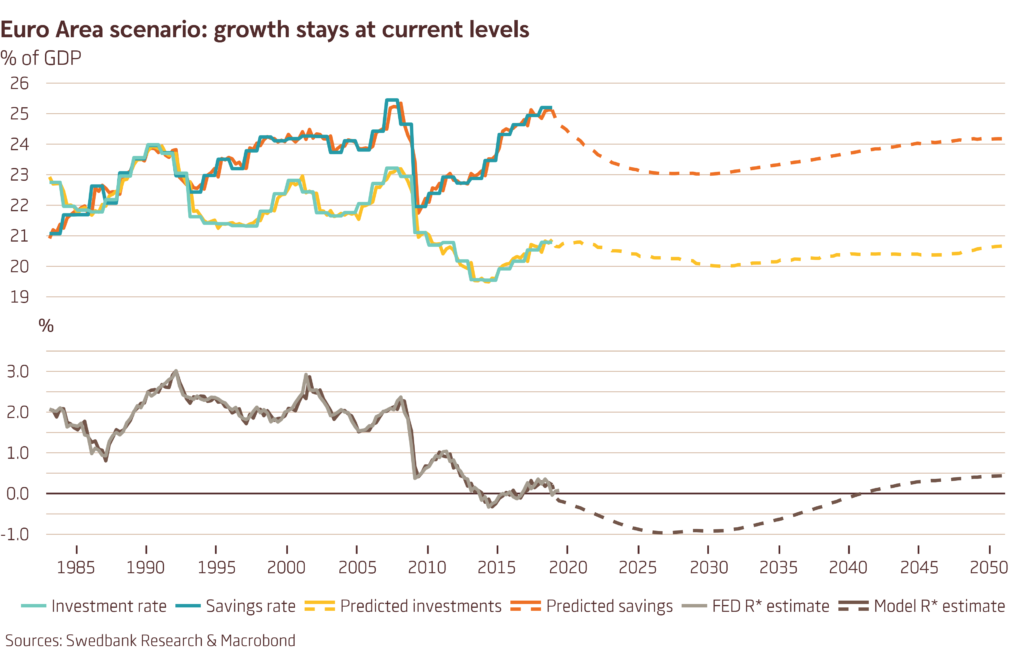 Overall, according to our analysis, due to the demographic changes, the natural rate of interest would be expected to decline by about one pp by 2030. The rate gradually starts to recover as the decline in the working-age population and growth of retirees slows—a dynamic consistent with other recent studies (Claus Brand, Marcin Bielecki and Adrian Penalver, et al., 2018). A lot of uncertainty shrouds these estimates because the ageing phenomenon currently observed in advanced economies is unprecedented historically. If the trend growth in the euro area remains similar to today’s, R* will likely be negative for a prolonged period of time and provide a serious challenge for the European Central Bank (ECB). If a positive scenario were to unfold and potential growth due to gains in productivity moves closer to 2 percent, then R* would be expected to be in the range of 1 to 2 percent in the upcoming decades. If a true “Japanification” of the euro area were to happen, the natural rate of interest would sit deeply below the lower bound, at around -2 to -3 percent. While demographics definitely is a major factor in the development of interest rates, the demand side is equally important. The scenario-analysis estimates show that if the euro area’s potential growth trends up to 2 percent, interest rates could be a full two pp higher by 2030.

If the scenarios in which the natural rate of interest goes into the negative zone for a prolonged time materialise, a very serious challenge presents itself to the ECB. Cutting rates deeper into negative territory sufficiently to close the output gap would bring severe costs to the banking sector (as negative rates can rarely be passed to depositors), insurance companies and pensions funds (future pensioners, more precisely) and could provoke a political backlash; thus, it is probably unfeasible. This would leave the ECB with only unconventional policy measures, but the effect of these on R* is unclear. One school of thought argues that quantitative easing (QE) and other measures help push effective policy rates deeper into the negative. This increases the difference between the real natural rate and the policy rate and should help to close the output gap faster and, therefore, raise the natural interest rate higher in the medium term (Claus Brand, Marcin Bielecki and Adrian Penalver, et al., 2018). P. Benigno, G. Eggertsson and F. Romei (2014), meanwhile, argue that unconventional policy raises the natural rate through increased leverage over time. On the other hand, QE could create a scarcity of safe assets, push their prices up and yields down, and depress the natural rate even further and again exacerbate all of the aforementioned problems (Andrew Filardo and Jouchi Nakajima, 2018). In addition, further innovation in monetary policy cannot be ruled out: central banks could devise new policy measures if the need arises to address the situation.

However, the bottom line is that most of the factors that determine the natural rate of interest lie outside of the jurisdiction of central banks. Productivity-enhancing reforms that incentivise innovation and encourage labour-market participation and investments in productive infrastructure can have a large influence on rates. An increase in the retirement age or even encouragement to participate in the labour market and delay retirement must also be considered. Usually, this is discussed from the perspective of the sustainability of public finances, but it also affects interest rates. A shorter length of retirement would mean reducing the need for saving, and with excess savings reduced, equilibrium rates would likely move up.

Can the Election Result Pull the UK Economy Out of Its Malaise?

What’s Ahead for Open Source and Financial Services in 2020