Top Posts
Commodities Outlook for 2023
The Value of Cash in a Time of Crisis: How...
The US-Africa Leaders Summit: Fostering a Closer Relationship with the...
Three Key Sectors in Which to Invest in 2023
Three Key Stocks in Which to Invest in 2023
Liquidity Management: A New Challenge for Banks
Home Banking Financial Stability Is Key for a Speedy Economic Recovery in Latin America
Banking 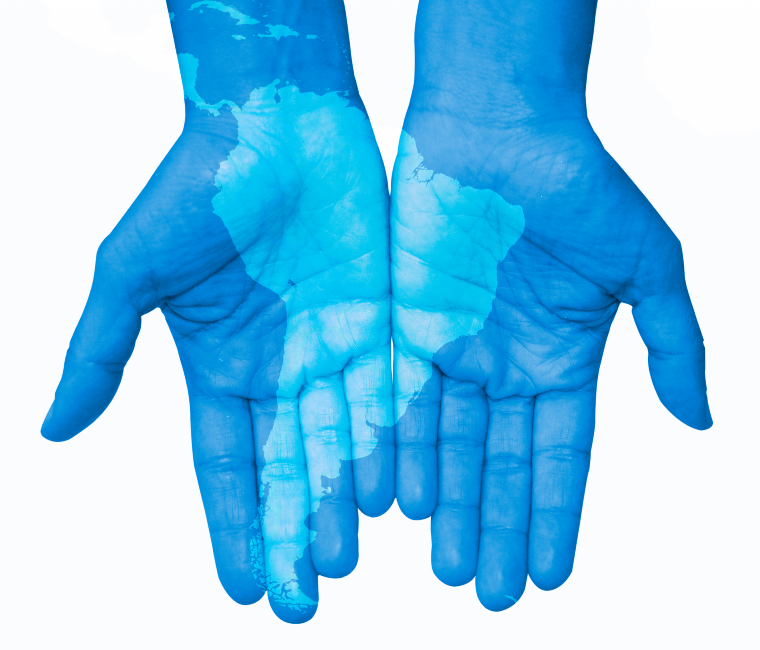 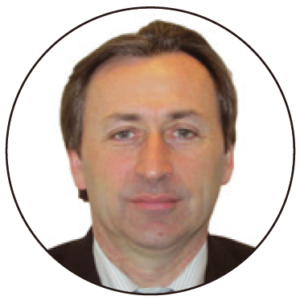 As Latin America and the Caribbean continues to battle the COVID-19 health crisis—it is already the worst-hit region in the world—an economic crisis has engulfed the region as trade has collapsed, capital has fled, commodity prices have plummeted and countries have locked down to stop the spread of the virus. While countries are slowly trying to reopen, the real side of the region’s economy has been deeply impacted. The International Monetary Fund (IMF) projects a recession of more than 8 percent of gross domestic product (GDP) this year. It appears that financial systems are coping remarkably well, considering the magnitude of the shock, but current balance-sheet data may not reflect the hit that banks will eventually have to take. There is a danger that the risks are being underestimated, and yet healthy banks will be critical for a speedy recovery.

Latin America and the Caribbean entered the COVID-19 era with relatively strong financial sectors; as the crisis erupted, banks had high capital ratios and ample liquidity buffers. But the pandemic has been both a demand and a supply shock; more than 30 million jobs have been lost, many firms have closed, and unemployment has soared. Financial systems are only as strong as the real sectors to which they lend, and banks are surely going to come under significant strain, with credit risks taking center stage.

A new report1 from a working group2 organized by the Center for Global Development (CGD) and the Inter-American Development Bank (IDB), which we co-chaired, examines the challenges for financial stability in the region posed by the pandemic and provides detailed recommendations on how to ensure that banks play a constructive role in the recovery phase. In this article, we discuss some of the group’s central assessments and recommendations.

Central-bank credibility is a must.

In sharp contrast to the crises of the 1980s and 1990s, most countries of the region can count on strong monetary frameworks, including low inflation, with more countries having adopted inflation-targeting regimes, maintained adequate reserve levels and been strengthened by credible central banks. This credibility has allowed many central banks to react to the pandemic by cutting interest rates and injecting large amounts of liquidity into their respective economies while keeping inflation expectations anchored and maintaining exchange-rate flexibility without suffering dramatic currency instability. Perhaps spurred on by this experience, some countries are contemplating changing central-bank charters to provide even greater flexibility to purchase public and private securities, and from primary, not just secondary, markets.

But there are dangers to going too far. A recommendation of the working group is that central banks should focus on providing liquidity but that they should avoid monetary financing of fiscal deficits and steer clear of accepting private-sector credit risk on their balance sheets. In short, central banks should maintain the credibility that has allowed them to be effective to date. Credibility has been won only relatively recently and may be easily lost. Some advanced economies’ central banks are pursuing large asset-purchasing programs but have the benefit of decades of institutional development. While they may not be perfect substitutes, governments from Latin America would be well-advised to turn to the IMF (International Monetary Fund) and multilateral development banks (MDBs) for additional fiscal resources and support if needed.

Since private-sector external debt rose significantly in the pre-pandemic period, as firms took advantage of low-dollar interest rates to issue dollars abroad; countries are facing the challenge of dealing with firms with high external dollar-denominated liabilities and disappearing sources of dollar income. Most countries have regulations to restrict currency mismatches on banks’ balance sheets, but central banks need to ensure that all foreign-currency-denominated transactions are reported and the risks assessed. To this end, central banks should develop ways to model firms’ risks, including roll-over and solvency risks, and conduct stress tests on how firms’ external issuances may impact different sectors, including financial systems. Policymakers may ultimately need to take preemptive actions to help some firms restructure debts or provide equity or equity-like injections.

Solvency is the real problem, not just liquidity.

Firms and families have lost income, and it seems very unlikely that this income will ever be regained. Countries may return to 2019 income-per-capita levels in a few years’ time, and some firms may get back to their revenue levels of the past, but the income that has been lost is now lost. At the same time, many countries have facilitated loan reprogramming with long grace periods, and a few countries have even mandated payment deferrals. Loans in such programs, however, tend to be reported as in good standing, and in most cases, banks are not required to set aside additional provisions. Figure 1 provides selected details of such programs across countries. 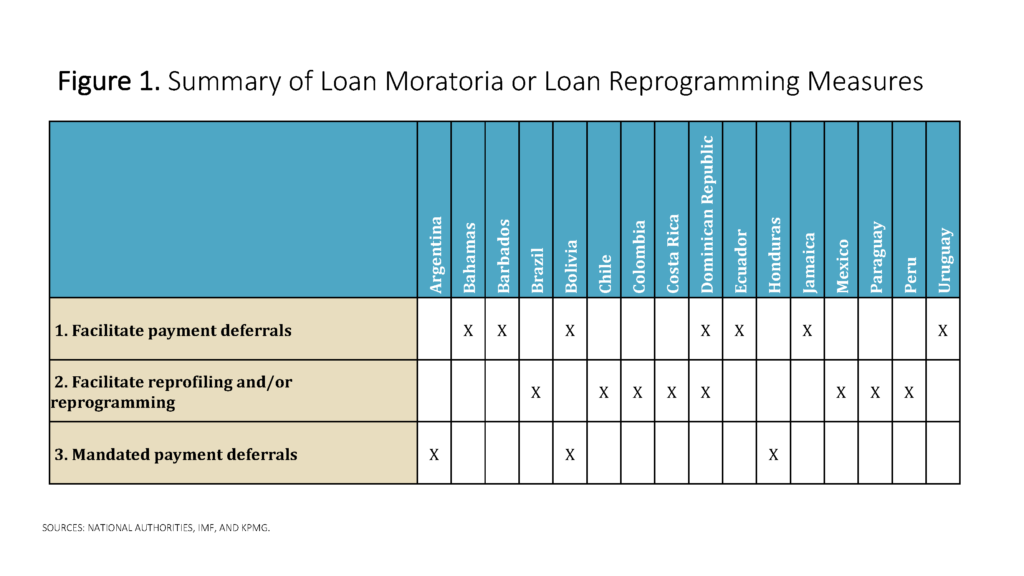 A real concern is what happens when loan grace periods and deferrals end. This is not just a liquidity problem. Solvency is the real concern. Moreover, during this period of payment suspensions, information about borrowers’ creditworthiness is being lost. So, the true risks are becoming harder and harder to ascertain.

The working group recommended that payment deferrals should be temporary, and banks should report their best estimates of the quality of their loans so that supervisors and central banks do not have over-optimistic views of the situations.

Provisioning requirements tied to loan classifications should be related to reasonable estimates of expected losses. This will likely imply digging into banks’ capital buffers to some degree. These are extraordinary times; some use of those buffers is to be expected. Banks and their supervisors can agree on and communicate a path to restore those buffers over time if it is felt that would be advantageous. A credible estimate of losses and a sustainable path to the future will instill confidence. Pretending that capital levels will not dip and deferred loans are all in good standing will not.

Guarantees are useful, but one size does not fit all.

Public guarantee programs have been initiated in many countries to support credit. In some nations, the announced programs have been sizeable. Given concerns regarding the potential fiscal costs and the value of ensuring banks have skin in the game, guarantees have been partial, covering anything from 50 to 90 percent of the loan amount, depending on the program. But banks have been reticent to lend to some firms in which risks are perceived to be high even with such guarantees. Take-up has then been somewhat limited, although programs continue to grow. Figure 2 contrasts the volume of guarantees actually awarded against the announced size of programs for some countries. 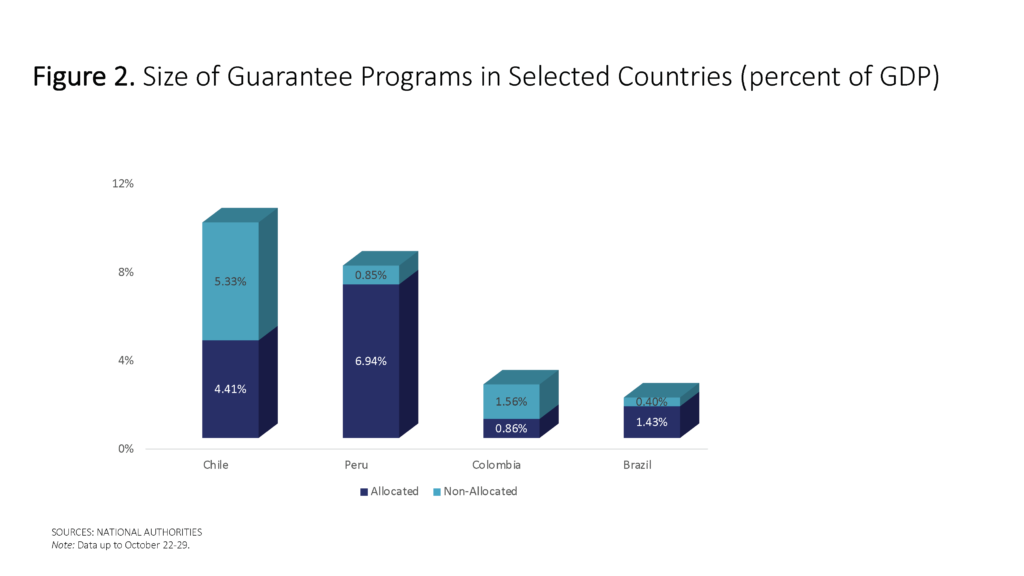 The region has a long tail of very small firms, many of them informal and lacking banking relations, collateral or credit histories. In this context, guaranteed bank loans will be of limited use. A grant is likely the only instrument that could help, but a program to assist such firms should come with a mechanism to gather much-needed information.

Other firms could be viable as economies recover, but with high debt levels, they may not survive. Piling on more loans, even if they are guaranteed, is likely not the answer, either. And, finally, there may be another group of firms in which risks are very high given the structural changes induced by the crisis; these firms could be viable, but banks will not wish to lend with partial guarantees. Here, equity, or an equity-like instrument, might be best.

Guarantees remain a useful instrument, but perhaps mainly for firms that satisfy certain criteria, such as formal firms of medium size that have a banking relationship and in which risks are moderate. Guarantee programs should be transparent, and the public sector should provision against expected losses.

A complementary program to provide equity support could be a useful addition. Such a measure would provide governments with upside as well as downside risks, potentially minimizing fiscal losses (or even yielding profits) and avoiding growing debts at firms that are already over-indebted. Essential to the success of such a program is the creation of structures and rules to ensure that public investments go to firms that are genuinely healthy rather than merely politically connected. In this regard, the private sector arms of MDBs, such as IDB-Invest (formerly Inter-American Investment Corporation of the Inter-American Development Bank Group) and the International Finance Corporation (IFC), are in a good position to assist in designing the program, developing the rules and even assessing which firms should benefit from equity injections. If done correctly, such an effort could also improve corporate governance and develop capital markets in the region.

Choosing the right instruments to support firms will be critical to make the most of the limited fiscal resources, especially since many countries entered the pandemic with weak fiscal positions.

Given the nature of the crisis, a significant number of firms are restructuring or closing. This will increase the stress faced by financial systems, and some banks may also need to be recapitalized or may even be forced to close. Although many countries have improved bank-resolution legislation since the crises of the 1980s and 1990s, authorities must make certain that such frameworks have appropriate regulations in place and can be operationalized promptly if needed. Most important, central banks and bank supervisors should be afforded adequate protections that insulate them from legal attacks after resolving financial institutions. Bank-resolution frameworks tend to be focused on individual institutions, so governments and central banks will have to remain alert to the potential buildup of systemic risks and develop contingency plans in the event that the risks to larger or multiple institutions grow.

Economies have suffered, although banks appear to be weathering the crisis well at this time. But given loan deferrals and restructurings and large state-sponsored guarantee programs, the true impacts on banks are hidden. Only when these programs end will we start to see the real hit to banks’ balance sheets. A financial crisis would only add to current economic woes, especially for the poor. The speed of the recovery, depending on the success of reopening without a second wave, will determine the size of the challenge. But recovery will also depend on whether banks are in a position to supply credit as demand picks up. Ensuring financial stability will minimize economic hardship and allow banks to play a constructive role in the recovery phase.

We believe the recommendations in this report will aid in navigating the choppy waters ahead.

1Center for Global Development: Sound Banks for Healthy Economies: Challenges for Policymakers in Latin America and the Caribbean in Times of Coronavirus, Andrew Powell and Liliana Rojas-Suarez, September 2020

Are Banks Enablers or Victims of Financial Crime?