Top Posts
Challenges Remain, But There Are Opportunities to Be Had in...
Interview with Mr. Olukayode Pitan, Chief Executive Officer and Managing...
Commodities Outlook for 2023
The Value of Cash in a Time of Crisis: How...
The US-Africa Leaders Summit: Fostering a Closer Relationship with the...
Three Key Sectors in Which to Invest in 2023
Home Banking Growing Central Bank Ambition Offers Hope for Iraq’s Burgeoning Banking Sector
Banking 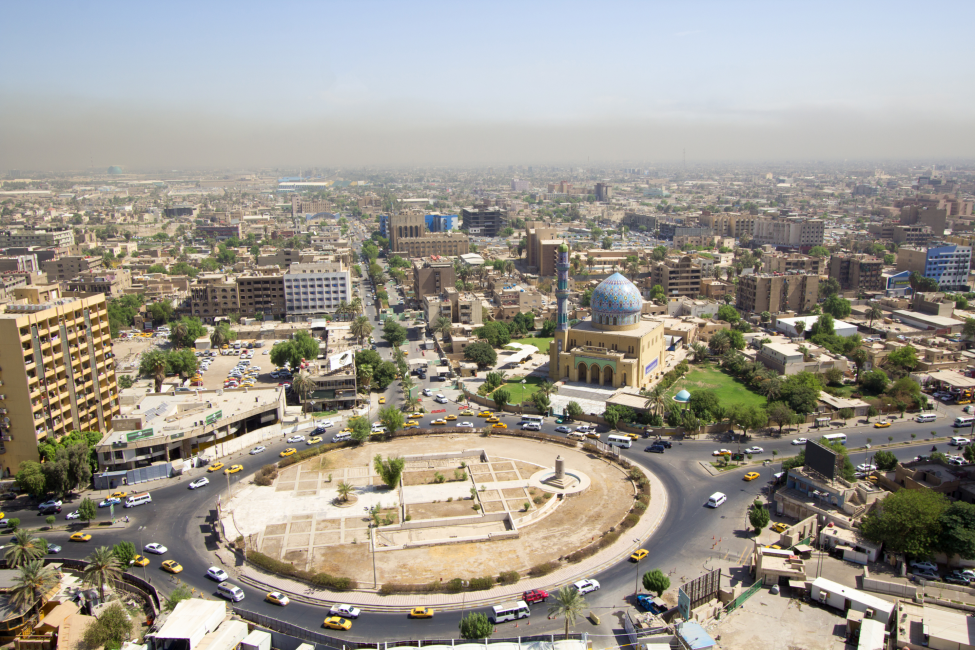 It is fair to say that perhaps no country in the world has experienced more chaos within its borders over the last 20 years than Iraq. With hugely destructive military conflicts engulfing the Middle Eastern nation—first with the invasion of the United States in 2003 and then with the Islamic State of Iraq and Syria (ISIS) 10 years later—it has been a steep uphill battle for Iraq to resume normal civilian and business life. But as this year has shown, the efforts made by Baghdad and the Central Bank of Iraq (CBI) are now helping its banking sector to make significant progress in its development.

“Iraq suffered from a long period of isolation at a time when the financial and international banks worked on setting many of the international standards we all have to work within,” Ziad Khalaf Abdel Karim, chairman of the board of directors at the International Development Bank for Investment and Finance, recently explained in an interview with Dubai-based news publication Gulf News. “This created a lack of communication between Iraqi banks and the rest of the world, which weakened trust in the Iraqi banking sector.”

Nonetheless, things are on the up for Iraqi lenders, thanks in no small part to the significant efforts being made by the central bank, which continues to demonstrate a firm commitment to achieving at least some semblance of stability for the sector. Indeed, the CBI announced in May that it had increased its capital to 5 trillion dinars ($3.42 billion) from 3 trillion dinars. The justification for such a move, the bank stated, was to enhance the results of its balanced policies with conservative investment management and stress the importance of the bank’s capital position. The CBI has also noted that the capital of central banks and their financial centres “reflect the sobriety of these institutions, the solidity of their assets, and their ability to support the banking sector and the economic sector in general”.

In mid-August, moreover, the CBI announced its cash reserves had risen to $82 billion, meaning that they have crucially returned to levels comparable with the period prior to the ISIS war, which had flared up in the country during the previous decade during the reigns of former prime ministers Haider Al-Abadi (2014-2018) and Adil Abdul-Mahdi (2018-2020) and which substantially drained the central bank of its reserves. A CBI spokesperson recently stated that the bank now expects to continue amassing reserves with a target of reaching $90 billion by the end of the year.

The CBI has also jumped 10 positions in the global rankings of the largest gold reserves to the 30th spot, with 130 tons. This disclosure followed the release of figures by the World Gold Council (WGC) in early August, revealing that the CBI was the world’s largest net gold purchaser in June, at 34 tons. This was the first addition to the bank’s reserves of the yellow metal since September 2018, which lifted its total gold reserves to 130 tonnes—approximately 11 percent of the value of its overall reserves, according to WGC calculations.

As for the wider banking sector, much is being done by the CBI behind the scenes to equip lenders with sufficient lending power to finance Iraq’s badly needed post-war development. In late June, for instance, CBI Governor Mustafa Ghaleb Mukhif announced in coordination with the Ministry of Finance the provision of crucial support measures to address some of the most urgent challenges faced by the banking sector. The bank has already launched a project to provide banks with 1 trillion dinars ($686 million) to support SMEs (small and medium-sized enterprises) in the country by creating employment opportunities, as well as a 5-trillion-dinar initiative for large enterprises. And it has reportedly provided the banking sector with a hefty 15 trillion dinars to boost development within Iraq’s real-estate, industrial and commercial sectors.

And despite being a nation highly dependent on its oil-export revenues, Iraq is leveraging its banking system to take bold, tangible steps to green its economy. According to the CBI’s director general of investments, Mazen Sabah Ahmed, the bank is particularly concerned about dramatic weather events that have already created several significant areas of parched land within Iraq. They have also contributed to a worrying lack of clean water from the Tigris and Euphrates rivers and groundwater, which the CBI estimates could drag Iraq’s gross domestic product (GDP) down by a mighty 4 percent. This shortfall would transpire despite any gains in GDP achieved by higher oil prices.

“The central bank operates in one of the world’s major oil-exporting countries and is highly dependent on crude oil revenue, which constitute over 95 percent of Iraq’s fiscal budget and around 60 percent of its GDP. Yet, the significant risks posed by climate change have pushed the central bank to take urgent action,” Sabah Ahmed wrote in a July 18 article for the Official Monetary and Financial Institutions Forum (OMFIF). The piece also detailed how the CBI is currently using local banks to offer 1 trillion Iraqi dinars ($690 million) in low-interest, eased-term loans for water, green and renewable-energy projects. “These loans will be provided through local banks. In addition, we are working with local government partners to raise awareness about the economic impacts of climate-related risks on the Iraqi people,” he added. “Our hope is that, by taking such an approach, we can avoid accelerating the severity of climate risks and collaborate with government, media and private organisations to achieve a necessary cultural change.”

Looking internationally, meanwhile, the CBI has shown a clear desire to strengthen banking and monetary ties with its neighbours. CBI Governor Ghaleb visited Iran in February to meet with his counterpart, Ali Saleh-Abadi, in the capital city, Tehran, reportedly to boost banking and financial cooperation. “Among the neighbors of the Islamic Republic of Iran, Iraq has a special position due to deep religious, cultural and historical ties with Iran,” Iran’s first vice president, Mohammad Mokhber, said of the meeting.

That said, Al-Arabiya has reported that this warming relationship has also had much to do with helping Iran evade sanctions imposed by US-led Western powers. The Arabic news outlet revealed that the CBI was pressing smaller private banks in Iraq to open credit accounts to enable Iran to import oil derivatives to meet local needs, including oil, gasoline, diesel, white oil and liquid gas, with many of the owners of such banks having close ties to Iran. After the banks convert Iraqi dinars to dollars, the funds are transferred overseas using other banks and exchange offices.

It has also become clear that illicit financial activity represents Iraqi banking’s biggest hurdle to overcome, with lax regulations and poor oversight having led to billions of dollars being stolen from lenders in the last decade. Authorities will thus have to focus more on boosting internal security and regulatory standards, especially after recent reports revealed that dozens of bank employees and customers at two state-owned banks—the Agricultural Cooperative Bank and Rasheed Bank—embezzled more than 920 billion Iraqi dinars (almost $700 million) in public funds. According to Iraq’s anti-corruption commission, 40 people engaged in “forgery, embezzlement, manipulation, money laundering, abuse of power, manipulation”, which took place at five of the banks’ branches. The commission added that the crime amounts to a “process of organized sabotage against the national economy”.

Such unfortunate incidents of corruption have been a scourge on Iraqi society for several years, President Barham Salih recently acknowledged, adding that at least $150 billion has been stolen and smuggled out of Iraq since 2003. Official figures put that figure even higher, at $400 billion, while Transparency International’s 2021 Corruption Perceptions Index (CPI) ranked Iraq 157th out of 180 countries, stating that efforts to dismantle systemic corruption “are hampered by a power-sharing governance system that has been weakened by sectarianism”. In turn, this has led to institutions replete with political appointments that offer sectarian allegiances and key connections rather than competence. “Such institutions naturally demonstrate little public accountability and are instead driven by each group’s political positions and power,” Transparency International added.

But one can realistically hope that the CBI and Baghdad will address such issues sooner rather than later and can implement the necessary safeguards to protect and enhance the reputational credibility of Iraq’s lenders. Indeed, the beginning of July saw the central bank unveil key measures to combat money laundering and terrorist financing, and binding resolutions have been issued in this regard. “Iraq’s procedures regarding combating money laundering and terrorist financing…have been issued in light of international requirements and standards and in compliance with local requirements,” the representative of the Anti-Money Laundering and Terrorist Financing Office at the CBI, Hussein Al-Mukarram, told the Iraqi News Agency at the time.

Many specialized training courses have also been held that have focused on combating money laundering and terrorist financing, countering financial crimes, penalties and bans, and employees of banking and non-banking financial institutions have been involved in them, Al-Mukarram added. He also stressed that “there are decisions that included obligating all financial institutions to form departments to report suspicious financial transactions and give them independence in their tasks, and to prepare a guide for policies and procedures to combat money laundering and terrorist financing in light of which work is carried out and to be available to all employees of financial institutions”.

Looking to the future, it is arguably the potential for expanding Islamic banking that offers the most hope to Iraq. Thanks predominantly to its large Muslim population, Iraq’s Islamic-banking sector represents one of its more exciting growth opportunities, especially given that the sector remains relatively untapped at present, representing only an 8.1-percent share of the total banking system’s assets by the end of last year and a 3.7-percent market share of total deposits. Nonetheless, it has demonstrated considerable growth in recent years, expanding by 18.2 percent from the end of 2020, according to Fitch Ratings, and outpacing Iraq’s annual conventional-banking asset growth of 15.1 percent.

Fitch expects Iraq’s Islamic-banking sector assets to continue growing over the medium term, supported by the government’s strategy for promoting Islamic finance and financial inclusion amid the low banking penetration in Iraq. It also recently noted that the CBI is advancing Islamic banking and digitalisation to boost financial inclusion throughout Iraq and has been working on reforming the Islamic banking system by introducing new regulations and instructions for Islamic banks since 2015.

The ratings agency did, however, caution that the still weak and underdeveloped banking sector and the low awareness of the Islamic-finance industry may slow the sector’s growth trajectory. “The Islamic banking sector’s medium-to-long-term growth potential in Iraq (B-/Stable) is positive,” Fitch stated in a commentary published in early July. “Iraq’s credit/GDP ratio was low at only 15 percent at end-2021. About 81 percent of the adult population did not have a bank account in 2021, versus 60 percent in the Arab world, according to World Bank. About 24 percent of the unbanked population cited religious reasons as a barrier, amongst the highest globally.”

A Look Inside the Demand for Luxury Real Estate Across Mexico