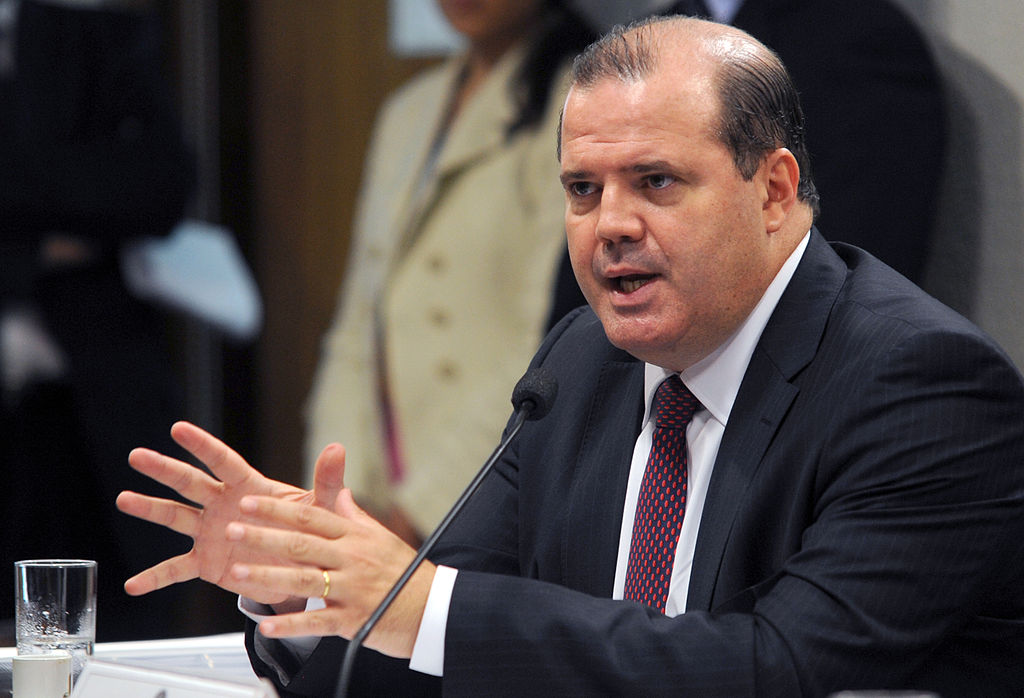 As far as emerging markets go, the BRIC nations of Brazil, Russia, India and China would all appear to be losing steam for differing reasons. Although each managed to sustain relative high growth rates, even while steadier economies faltered, in the wake of the global financial crisis, each now manifests signs of slowing down. It is not just the depressed prospects in global trade partners that is taking the shine off the BRICs. Seemingly insurmountable issues in their local economies, whether created by structural and long standing or of a more recent vintage, are compounding the stress caused from depressed market demand for their exports. And Brazil has been experiencing a lot more bad news lately compared to the other three BRICs.

On the 18th of September Brazil’s central bank chief Alexandre Tombini told lawmakers in congress that pessimism about the Brazilian economy was unwarranted as recent data showed local industry gradually recovering. Tombini also reiterated that the central bank will use all instruments at hand to reduce volatility in the foreign exchange market. However the pessimism is everywhere regarding Brazil from financial institutions to the global media.

On the 2nd of October, Moody’s Investors Service changed Brazil’s Baa2 government bond rating to stable from positive citing a deterioration of key credit metrics, slow growth prospects, deterioration of reporting quality of the government accounts and continued borrowings by the Treasury to support increased lending by public banks.

It is very clear that Brazil’s government debt-to-GDP as well as the investment-to-GDP ratios are weaker compared to those of other countries with sovereign bonds in the Baa rating category.

Brazil has fundamental problems with infrastructure that need addressing such as its transport, ports, highways and airports, President Dilma Rousseff is even quoted as saying the country was “two centuries” behind when it comes to building its rail network.

Brazil’s outlook for economic growth is rather weak. Its main export markets, US, China and Europe are only showing sluggish growth. Locally burdensome consumer debt, Brazilian consumers pay the highest rates of interest in the world, rising labour costs, and infrastructure bottlenecks are all contributing to lower potential economic growth.

Within the Central Bank’s latest quarterly report, released on 1 October, an increase was made to its 2014 inflation forecast, stating that consumer prices will rise 5.7 percent even if the benchmark interest rate is raised by November to 9.75. This increase, from a rate of 5.2 forecast in June, marks the fifth year in a row that Brazil’s inflation has breached its target rate of 4.5 percent. The central bank also cut the 2013 growth estimate to 2.5 percent from 2.7 percent.

Moody’s rationalized the rating change saying “Even though there are signs that the Brazilian economy may be starting to recover, Moody’s view is that, if and when the upturn materializes, it is unlikely that it will be strong enough to restore a positive trend in Brazil credit metrics, a condition necessary to merit a positive outlook on the country’s sovereign rating.”

Others who take the long view, such as the International Monetary Fund (IMF), appear to have confidence in Brazil, its central bank and its political leadership. The IMF Executive Board, which concluded the Article IV consultation with Brazil in late July even went on to commend the “Brazilian authorities for their long-standing commitment to sound policy frameworks, notably the fiscal responsibility law, inflation targeting, the flexible exchange rate, and a strong prudential regime.” According to them, “these frameworks, together with the implementation of social programs, have underpinned macroeconomic stability and remarkable growth over the past decade, lifting living standards and reducing poverty.”

Under Article IV of the IMF’s Articles of Agreement, the IMF holds bilateral discussions with members, usually every year; a staff team visits the country, collects economic and financial information, and discusses with officials the country’s economic developments and policies. The staff team then prepares a report which forms the basis for discussion by the Executive Board. At the conclusion of the discussion, the Managing Director of the IMF, in his capacity as the Chairman of the Board, summarizes the views of Executive Directors, and this summary is transmitted to the country’s authorities.

During the last decade, Brazil’s strong macroeconomic frameworks have contributed to preserve macroeconomic stability, support robust growth, and underpin sustained poverty reduction. The key pillars of Brazil’s macroeconomic frameworks have been the fiscal responsibility law, the inflation targeting regime, and the flexible exchange rate. In addition, a strong prudential framework has underpinned a sound financial sector that withstood well the global financial crisis of 2008–09. The prolonged macroeconomic stability has facilitated the adoption of far-reaching social programs that have produced a remarkable social transformation—in particular, a substantial reduction in poverty and the increase in living standards of large segments of the population.

Brazil’s economy is recovering gradually from the slowdown that began in mid-2011. Consumption remained resilient last year underpinned by low unemployment and broad gains in real wages, although it has slowed somewhat more recently. After a protracted period of weakness, investment has begun to recover in recent quarters while business confidence has firmed. With the economy estimated to be operating close to potential, supply-side constraints have restrained near-term growth and exacerbated inflationary pressures. Low unemployment has also contributed to demand-pull and cost-push inflation pressures. End-of-period inflation, the reference measure for inflation-targeting in Brazil, has been below the upper limit of the 4½ ± 2 percent target range for several years; it has been running however in the upper range of the target band, while medium-term inflation expectations have risen above the mid-point target. The authorities have started to focus on alleviating supply-side constraints (including infrastructure bottlenecks) and containing inflationary pressures by tightening monetary policy.

The external current account deficit has widened, reflecting weaker external demand, buoyant consumption and, more recently, a pickup in investment and temporary disruptions in oil production. The real exchange rate depreciated over the last year, most recently as part of a broader realignment across emerging markets. At the same time, unit labor costs in U.S. dollars have remained broadly unchanged, limiting the impact on competitiveness, as the effect of the weaker currency has been offset by rapid growth in real wages and stagnant labor productivity gains. Capital inflows, particularly portfolio flows, subsided in 2012 linked to a weaker growth outlook and lower interest rates in Brazil, and the use of capital flow measures. More recently, global financial volatility and higher global risk aversion have further dampened portfolio inflows to Brazil. Equity prices have declined and corporate debt and equity issuances have slowed, in line with other major emerging markets. Foreign direct investment inflows, however, have remained robust. International reserves have remained broadly stable at a high level following a halt in reserves accumulation since mid-2012.

Financial conditions have tightened but credit growth has remained strong, driven by public banks’ lending. Mortgage lending has continued to grow strongly, but remains a relatively small share of total credit. Real estate prices, though moderating, have continued to increase. The authorities have made progress in implementing key recommendations of the 2012 Financial Sector Assessment Program (FSAP) Update.

Reading this entire document would really put one in a more favourable mood about Brazil and its short, medium and long term prospects. But, that does not mean that the country lacks challenges. It does and will continue to do so. The IMF press release acknowledges this noting that the possibility of external conditions, domestic supply side constraints and policy uncertainties that may hold back near term growth of the economy. The entire document is worth a read; especially if you are prone to pessimism.

Times are going to be tough before they get better, especially for the Brazilian consumers who made use of easy credit and are now carrying a huge burden of consumer debt. Increasing interest rates may quell the demand somewhat, but it will also affect economic growth. Brazil’s trading partners, including the United States, Europe and China are themselves facing their own economic challenges. This too can dampen the prospects of faster economic growth, because there are no guarantees; and definitely no certainties in this connected global economy. Possibility of contagion is real. It is not just a movie title, and not just about infectious diseases. Countries and economies can crash too with contagion. So the Brazilian central bank certainly has its hand full, if it were to keep its commitments and stick to its mission. And it will need the support and the full commitment of the government to keep to its strict but laudable goals.

In the meanwhile, there is speculation about the true independence of the Brazilian Central Bank. Then again, there is also the question whether central bank independence is an issue in the first place.

Two-time Nobel Prize winning economist Joseph Stiglitz maintains that the independence of a central bank is overrated. And he makes a valid point that during the financial crisis, countries like Brazil, China, and India with less independent central banks did far better compared to countries with more independent central banks, such as those in Europe and the United States. But, of course, his argument presents within it the source of its own weakness.
“There is no such thing as truly independent institutions,” Stiglitz said at the C D Deshmukh Memorial Lecture in India, “All public institutions are accountable, and the only question is to whom.”

Yes, the only question is to whom. But the IMF at least appears to be confident that both Brazil’s Central Bank and to whom it is reporting appear to be doing a pretty good job at the moment given challenging conditions.

Which way will the US economy head in the next quarter?