Top Posts
Crypto-assets and the Relevance of International Private Law
Whither International Banking Regulation?
Interview with Mr. Selman Bicaco Urrutia, Head of Private Banking...
Interview with Ms. Jelena Galić, Chairperson of the Board of...
The International Banker 2022 Western & Eastern European Awards Winners
Why the Status of the Fifth-Largest Economy Is a Job...
Home Banking Has the Pandemic Triggered New Business Creation?
BankingFinance 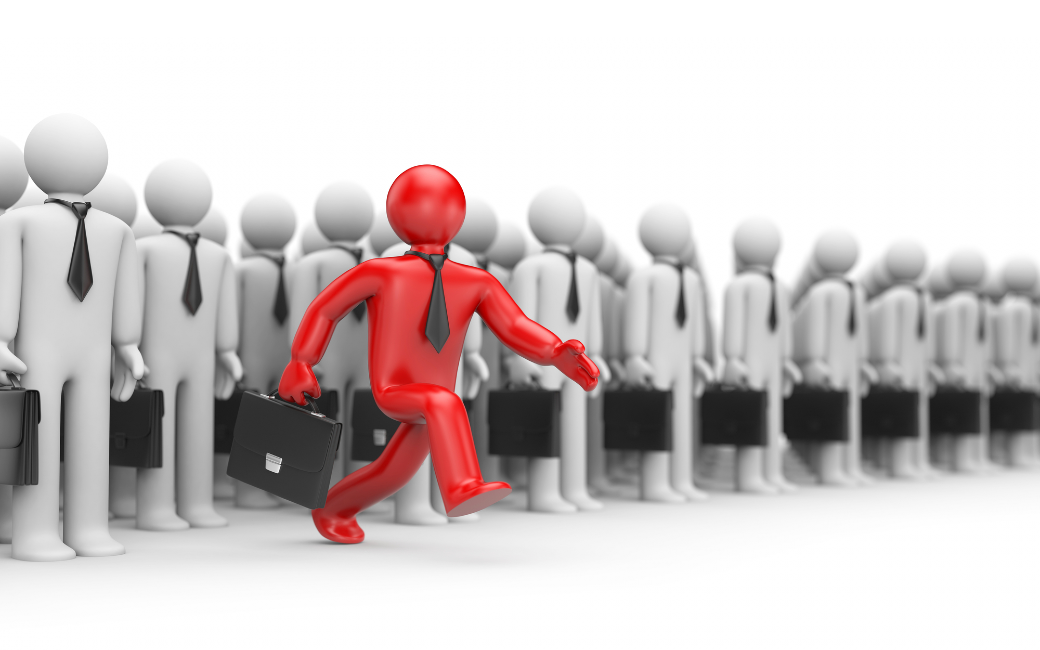 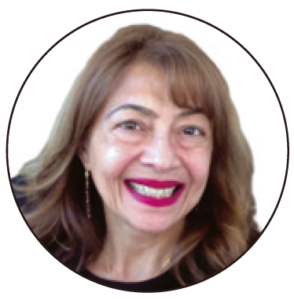 The current lockdowns, by imposing physical distance between individuals, could have a deleterious effect on entrepreneurship and startup creation in the United States. Serendipitous and in-person interactions foster the skills needed for emerging enterprises, as people and ideas churn in a spirit of creativity.

It is commonly believed that people work better in teams and that the variation amongst team members’ characteristics and skills adds to the creativity of individual team members. This means that founders need to coordinate the actions of individuals and motivate them to act in accordance with the goals of the business. They need to provide emotional support to members to address initial setbacks and hurdles. To promote a harmonious working environment, founders frequently employ tacit suggestions and an open-discussion format so that team members can voice their ideas.

Physical distancing makes it harder to communicate nuanced suggestions through tone of voice or facial expression. Incomplete communication might retard the development of new business ideas and, hence, entrepreneurship. Online communications might be misinterpreted and, with no room for immediate explanation, could lead to negative outcomes. Even with synchronous-communication technologies, such as Zoom, informal banter is reduced to timed banter as there is no room for multiple simultaneous conversations, as illustrated by the following example. Individuals A and B have a conversation, while C and D are heatedly debating another idea. A might overhear C and enter that conversation such that, together, all four outline a new business plan.

On the other hand, the free time and cognitive space provided by business closures and layoffs, both temporary and permanent, could stimulate the germination of business ideas and, hence, the emergence of new enterprises. Solitude and reflection may be the requisite ingredients for a brilliant business idea. Preliminary evidence suggests that, at least in the United States, the latter thesis might be more valid.

Small businesses, defined as those with less than 500 employees, were devastated in the first quarter of 2020. The impact of COVID-19 on the viability of small businesses was harsh. In a paper examining 5,800 small businesses during the last week of March 2020, researchers found that layoffs and shutdowns of small businesses were implemented well before a nation-wide awareness of the pandemic. “Across the full sample, 43 percent of businesses had temporarily closed, and nearly all of these closures were due to COVID-19.” Survey respondents cited “employee health” and “demand shrinkage” as major reasons, “with disruptions in supply chains being less of a factor”.1Alexander W. Bartik, Marianne Bertrand, Zoe Cullen, Edward L. Glaeser, Michael Luca, Christopher Stanton. “The impact of COVID-19 on small business outcomes and expectations.” Proceedings of the National Academy of Sciences, Jul 2020, 117 (30) These businesses had limited working capital, with “only two weeks of cash on hand at the time of the survey”. The researchers found that the most severe closures, as a fraction of industry employment, were in customer-facing businesses, such as food services, hospitality, personal services such as barbers and hair salons, retail and the performing arts.

A strong network of founding team members does have a salutary effect on the post-entry outcomes for startups. A recent study 2Joonkyu Choi, Nathan Goldschlag, John Haltiwanger, J. Daniel Kim, 2019. “Founding Teams and Startup Performance,” Working Papers 19-32. Center for Economic Studies, U.S. Census Bureau discovered that the success of a startup might originate from the social and organizational capital that is created at the time the firm is founded, which is the structural genesis of the originating team itself. The researchers asked whether removing a founding member might have adverse consequences for the business startup. Examining the impact of the premature death of a founding member on startup performance, the authors noticed a “persistently large, negative and statistically significant impact on post-entry size, survival and productivity of startups”.

Entrepreneurship is often associated with the reallocation of resources so that the rate of business formation or startup is likely to lead to job creation. Young firms have been absent in the creation of new jobs in the US in recent years, leading to concern about the loss of economic dynamism.3Ryan Decker, John Haltiwanger, Ron Jarmin, Javier Miranda, 2014. “The Role of Entrepreneurship in US Job Creation and Economic Dynamism.” Journal of Economic Perspectives, American Economic Association, Volume 28(3), pages 3-24, Summer The secular decline in new-business formation has been of concern, but perhaps no longer, according to recent data.

Administrative-record data from the U.S. Census Bureau suggests that startup activity is likely to thrive in the months ahead. Applications for Employer Identification Numbers (EINs) filed with the U.S. Department of the Treasury through IRS Form SS-4 have been correlated with the start of new businesses. Applicants can indicate forthcoming wage-payment dates and the expected number of employees over the coming year. EINs are forward-looking, provide very timely information on business formation and are related to economic activity at the local level.

Analyzing this data for the period 2005-16, Bayard et al., 2018,4Kimberly Bayard, Emin Dinlersoz, Timothy Dunne, John Haltiwanger, Javier Miranda, John Stevens, 2018. “Early-Stage Business Formation: An Analysis of Applications for Employer Identification Numbers,” Working Papers 18-52. Center for Economic Studies, U.S. Census Bureau found that overall business applications rose prior to the Great Recession (2007-09) and during the recession. Since the end of the recession, they have expanded by about 20 percent. The data on the applications are received on a weekly basis. However, many EIN applications remain in the application stage and are disconnected from the actual initiation of a new business. It would seem that simply looking at total EIN applications would provide a noisy signal of startup activity. Of the business-applications data series, the subset of business applications with planned wages indicates a wage-payment date. The indication of a wages-paid date is associated with a high likelihood of transitioning into a business with payroll. (Note that wage-indicated applications fell sharply from 2007 through 2019, so the current-quarter increase may be meaningful. [See Figure 2.]) 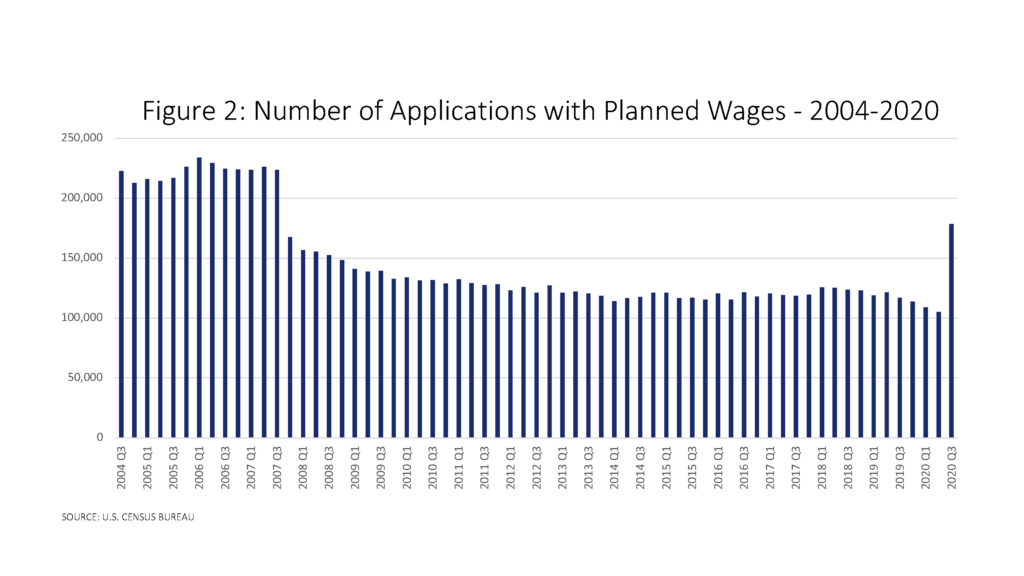 On October 14, 2020, the U.S. Census Bureau published the seasonally adjusted business-applications and business-formation statistics for the third quarter of 2020.5Business Formation Statistics, third quarter, 2020. Accessed on 10/18/2020 Third-quarter 2020 business applications rose from 883,018 in the quarter ending in June to 1,566,373 in the quarter ending in September, representing an increase of 77.4 percent. [Figure 1]. 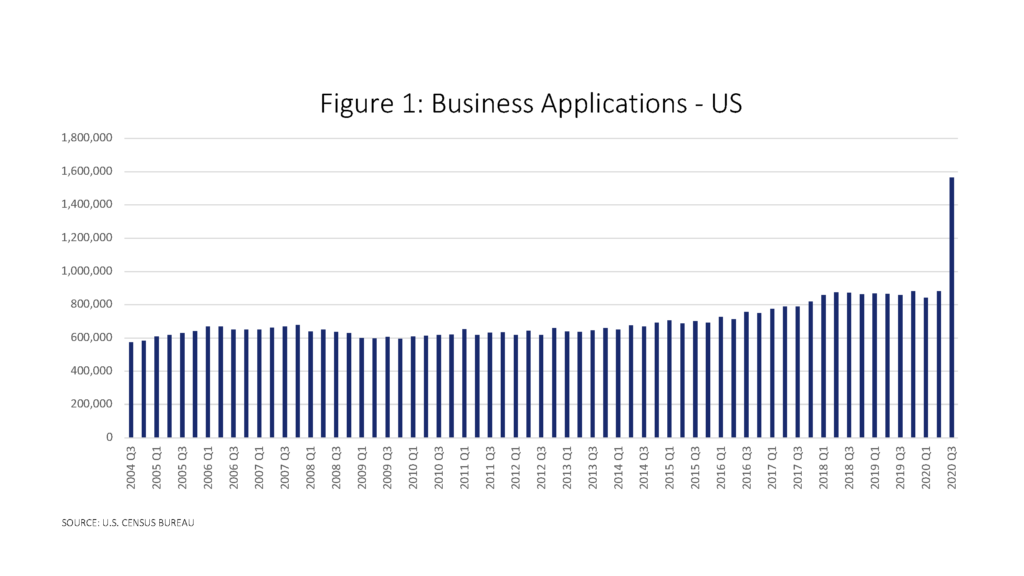 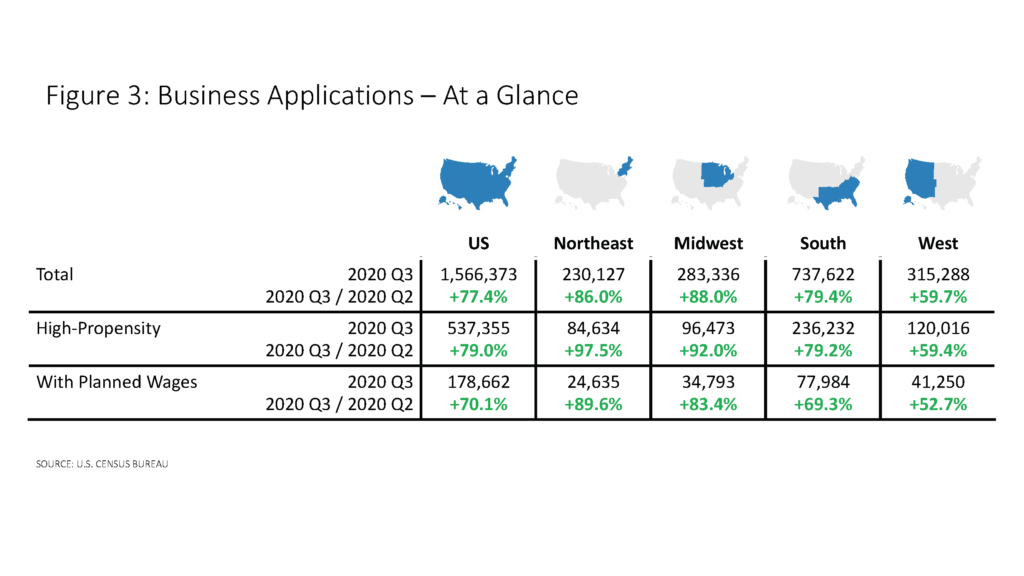 Of the applications submitted for new businesses, how many actually came to fruition? The business-formation data series are forward-looking since they measure new-business formations starting from the time of the initial application to the actual transition to a startup business. The data indicate “the number of employer businesses that originate from Business Applications from within four quarters from the quarter of application”. Unfortunately, data are not available for the current time period, but extrapolating from past data might give some indication of how many applications are usually successful. 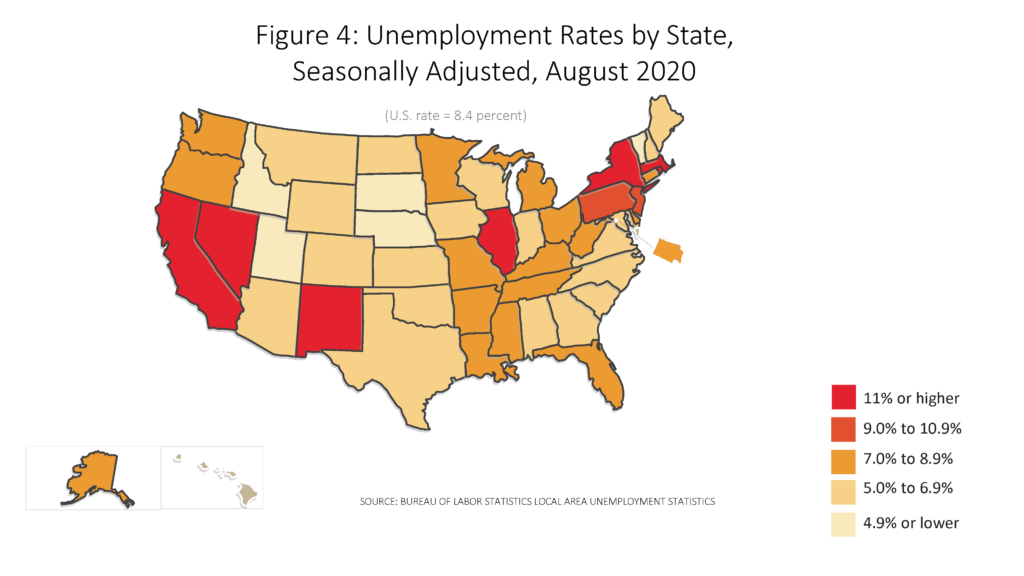 However, examining unemployment at the metropolitan-area level, we see a slightly different story. With the exception of major metropolitan coastal areas in California and the Las Vegas corner of Nevada in the West and the Chicago metro area of Illinois in the Midwest, the job-switching effect appears to be the stronger story in Midwestern and Western states. Unemployment rates are below the national average in these regions.

Could low rates of COVID-19 infection be another explanation? It appears that states in the Midwest are experiencing above-average daily cases per 100,000 of the population, followed by the Southern states. Nine of the top ten counties with the highest numbers of recent cases per resident are in the Midwest 6“Covid in the U.S.: Latest Map and Case Count.” October 22, 2020. Accessed on 10/22/20 . What could explain higher business applications from a part of the country where COVID-19 cases are rising at the fastest rate compared to the rest of the United States?

The Wall Street Journal suggested that changes in the tax calendar as well as the higher savings rate forced upon individuals due to the lockdowns opened up new financing sources.7Gwynn Guilford, Charity Scott. “Is it Insane to Start a Business During Coronavirus? Millions of Americans Don’t Think So.” September 26, 2020. Accessed on 10/22/20 However, that article focused on the under-30 demographic segment who were starting new businesses in September. It would be plausible that they are cash-strapped due to their youth, so easier financing is a reasonable explanation. But what about the over-30 cohort in the Midwest today who are facing a devastating health crisis? Perhaps the pandemic itself is opening new markets with new opportunities. Private-home tutors, caregivers, concierge-style personal assistants (for grocery pickup and such) could present some opportunities. In Mandarin, the word for crisis also means opportunity.

7Gwynn Guilford, Charity Scott. “Is it Insane to Start a Business During Coronavirus? Millions of Americans Don’t Think So.” September 26, 2020. Accessed on 10/22/20 from https://www.wsj.com/articles/is-it-insane-to-start-a-business-during-coronavirus-millions- of-americans-dont-think-so-11601092841

Are Banks Enablers or Victims of Financial Crime?