Top Posts
Can the Indo-Pacific Economic Framework Expand US Economic Influence in...
Banks Remain Uniquely Vulnerable to Sophisticated Cyber-Attacks
Western Banks Willing to Accept the Short-Term Pain of Russian...
Why the US Is Ramping Up Its Presence in Somalia...
How Technology Is Helping to Solve Global Supply-Chain Issues
UK Inflation Climbs to Fresh 40-Year High
Home Banking Holder says no bank is above the law
Banking

Holder says no bank is above the law 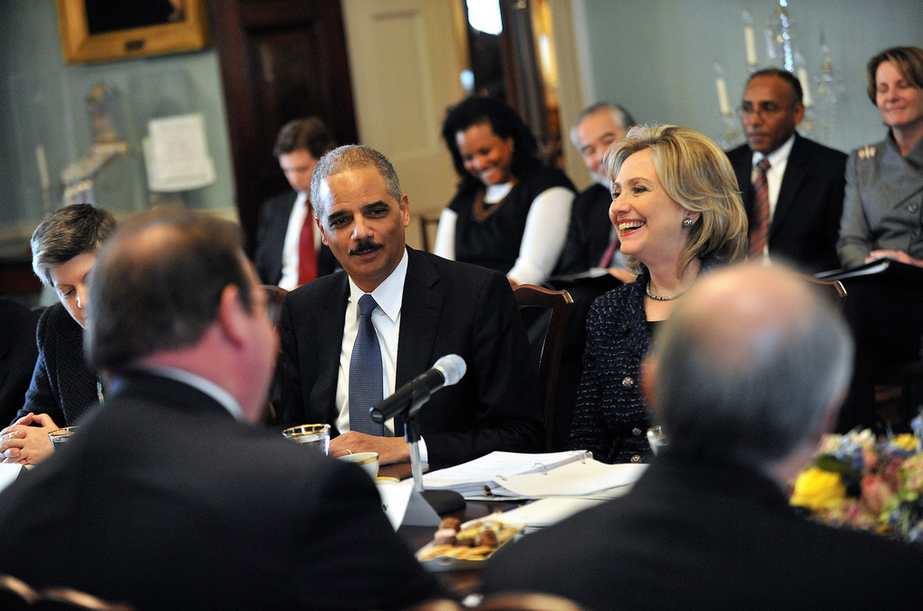 When U.S. Attorney General Eric Holder appeared before a Senate Judiciary Committee in March, he seemed to indicate that certain financial institutions were too large to be prosecuted effectively, citing potential economic disaster as reason. Now, amid public backlash from liberal advocacy groups such as MoveOn and CREDO (and even a prominent Senator), Holder is singing a different tune.

“Let me be very, very, very clear. Banks are not Too Big to Jail. If we find a bank or a financial institution that has done something wrong – if we can prove beyond a reasonable doubt – those cases will be brought” Holder explained during a video released through the Department of Justice website. This release comes as the United States is pressing for charges against two foreign banking institutions; reports indicate that the Swiss bank Credit Suisse and France’s BNP Paribas are in the Attorney General’s cross-hairs.

This saga has re-ignited frustrations over the inability of the Justice Department, and the Obama Administration itself, to prosecute major banking executives in the fallout of the 2008 financial crisis. In fact, during the 1990s, white-collar prosecutions averaged over 17% of all federal cases. That number has dropped to 9.4% since 2010.

Holder’s original comments highlighted fears that any major legal action against major American banks could result in major macroeconomic distress. As he stated then;

“The size of some of these institutions becomes so large that it does become difficult to prosecute them,” Holder said. “…if you do bring a criminal charge it will have a negative impact on the national economy, perhaps world economy. That is a function of the fact that some of these institutions have become too large. It has an inhibiting impact on our ability to bring resolutions that I think would be more appropriate.”

Holder is concerned that criminal charges could lead to loss in investor confidence or, more seriously, result in a financial institution losing its charter. This argument is rooted in similar arguments made during the throes of the financial crisis, when several large companies received direct government aid (against their will, in some cases) to avoid collapse. During that time, the phrase “Too Big to Fail” was used to describe any institution so important and interconnected that a failure could cause systemic issues.

Which banks are considered Too Big to Jail/Fail? In 2011, a policy research organization called the Financial Stability Board set out to answer that question. They published a list of 29 banks which they considered “systemically important.” Of the 29 banks, 8 are based in the United States, including such names a Bank of America, Bank of New York Mellon, JPMorgan chase and Wells Fargo.

Stating that his statements in front of the Senate had been “misconstrued”, the Attorney General has attempted to redefine his message as one of regulatory prudence.

“Rather than wall off banks from prosecution, the potential for such severe consequences simply means that federal prosecutors conducting these investigations must go the extra mile to coordinate closely with the regulators that oversee these institutions’ day-to-day operations,” Holder explained.

While it is true that no executives on Wall Street have been prosecuted in connection with the events of 2007-2008, Holder was quick to point out that many thousands of financial cases have been brought by the Justice Department since President Obama assumed office.

He added that he is “personally monitoring” the status of the two ongoing investigations, but that he would not specify any particular targets.

Both Credit Suisse and BNP Paribas appear on the Financial Stability Board’s list of “systemically important” banks. Credit Suisse is under fire for allegedly helping wealthy US citizens evade taxes, while BNP is accused of processing transactions in regions that violate existing US sanctions.

Markets have, historically, shown sensitivity to legal action. Justice Department officials likely recall the fallout from the indictment of Arthur Anderson during the Enron proceedings, where thousands of jobs were lost before a verdict was even reached. This could give incentive for Mr. Holder to tread softly. It remains to be seen if potential banking clients would choose to do business with banks following a felony conviction, and whether key employees would leave the company.

While the Justice Department has not commented on possible proceedings, reports indicate that one or both cases could result in a guilty plea. BNP Paribus has warned that it faces up to $1.1 billion in fines over the potential violations of sanctions with Iran and other countries.

Market reactions to these reports have been slow. While BNP has lost share value in recent weeks, it has traded unevenly for some months prior to any news about a possible plea. Credit Suisse has also dipped slightly, though it’s shares remains positive for the year.

While the Justice Department aims to calm markets with one hand, they are attempting to placate critics in the political realm. Despite the multitude of financial cases brought under the watch of Attorney General Holder, only 1 financial executive (Kareem Serageldin, incidentally the former Credit Suisse CDO Chief) has been convicted for activity during the financial crisis. Contrast that with the more than 800 such convictions following the savings-and-loan scandals of the 1980s, and the Administration faces a significant public relations issue.

In this light, Mr. Holder has been emphatic that the Too Big to Jail label is rejected by the Justice Department, calling the view “mistaken,” and adding that it “has been rejected by the Department of Justice. To be clear: no individual or company, no matter how large or how profitable, is above the law. When the Department of Justice conducts investigations, we will always follow the law and the facts wherever they lead.”

Organizers from left-wing advocacy groups claim that more than 300,000 signatures have been added to petitions since March Senate hearing, calling on the President and the DoJ to increase efforts to punish large banks. Some of the petitioners want the largest banks forcefully broken up. 150,000 of those signatures are attached to a petition demanding that Eric Holder resign if he fails to prosecute Wall Street bankers.

The trading impact of the Volcker Rule