Top Posts
How Gamification is Catapulting Digital Banking to the Next Level
Challenges Remain, But There Are Opportunities to Be Had in...
Interview with Mr. Olukayode Pitan, Chief Executive Officer and Managing...
Commodities Outlook for 2023
The Value of Cash in a Time of Crisis: How...
The US-Africa Leaders Summit: Fostering a Closer Relationship with the...
Home Banking How Banks Can Ensure Their Capital Is Being Used in a Sustainable Way
Banking

Investments and lending can be used to help developing countries prosper in a sustainable way. Energy investments not only provide jobs and power, they also offer important development opportunities. However, harmful investments along with risky and rushed, unsustainable developments can rob countries of their most precious assets—and threaten the reputations, and capital, of banks and investors.

Given the urgent climate-change challenges our world faces, you might expect WWF (World Wide Fund for Nature) to support rapid investment in hydropower projects to deliver renewable energy. Hydropower plants currently provide the largest source of renewable energy in developing countries. However, hydropower developments can also bring serious environmental risks. They can affect hydrology and fragment river systems. They can stop the movements of migratory fish and wildlife; trap sediment, resulting in, for example, erosion of river banks, changes to water tables and impacts on spawning grounds that impact fisheries; and trap nutrients, potentially altering aquatic food chains and soil fertility downstream.

Each hydropower project is unique, as are its effect on the environment. It is essential, therefore, that the risks are identified through careful assessment. It is recognised that the most important consideration in making hydropower sustainable is the location of the dam rather than its design or operation. This highlights the need for system-scale planning of hydropower, which looks at the whole river basin and compares alternatives that balance energy development with the protection of social and environmental resources.

The Rufiji Hydropower Project in the Selous Game Reserve, Tanzania, is one example that has been on the drawing board for decades but is currently being considered for development. The desire for increased power in Tanzania is understandable, given the growing population and the need for economic growth. However, the process for developing the Stiegler’s Gorge hydropower project inside the Selous World Heritage site is less clear.

The Selous Game Reserve is a World Heritage Site, a designation given by UNESCO (United Nations Educational, Scientific and Cultural Organization) to some of the most precious places on the planet. It is also part of the government’s plans to expand tourism, and there are a number of existing multi-million-dollar initiatives involving the World Bank as well as German and Tanzanian governments to increase infrastructure and manage the wildlife more effectively in the game reserve.

The Selous Game Reserve was designated a World Heritage Site in 1982 because of the exceptional wildlife that roamed its vast landscape, mainly undisturbed by humans. However, four years ago it was put on the World Heritage “in danger” list after industrial-scale poaching had cut the elephant population by almost 90 percent and amid concerns over other industrial activities, such as extractions and construction of large dams.

The hydropower dam would generate challenges for the game reserve as it would create a 1,350 square- kilometre reservoir, one of the largest in East Africa, roads and permanent houses for staff. It would flood elephant and black-rhino habitats, and risk the livelihoods of nearly 200,000 people—some of whom are found more than 180 kilometres downstream in another globally protected coastal area.

No strategic environmental assessment has been undertaken, which risks putting the project in violation of Tanzanian law. But building a dam with a large reservoir in a World Heritage Site also goes against the UNESCO World Heritage Committee’s decisions and position on dams. This exposes international companies and their investors/banks to possible formal complaints through the OECD (Organisation for Economic Co-operation and Development) Guidelines for Multinational Enterprises, which expects banks, investors and construction companies to carry our proper due diligence.

And the World Bank, in its report “Tanzania Economic Update, November 2017: Managing Water Wisely” (stressing the urgent need to improve water-resources management in Tanzania), stated that the dam would be located in a river basin already water-stressed by large-scale crop irrigation and other dams upstream, with the effects of climate change likely to make rainfall in the region even less reliable.

Tanzania has a wealth of renewable-energy potential outside its protected areas. Such investments could provide better sustainable-power production without risking the wildlife and unspoilt wilderness that could drive away tourism in Tanzania for generation upon generation. 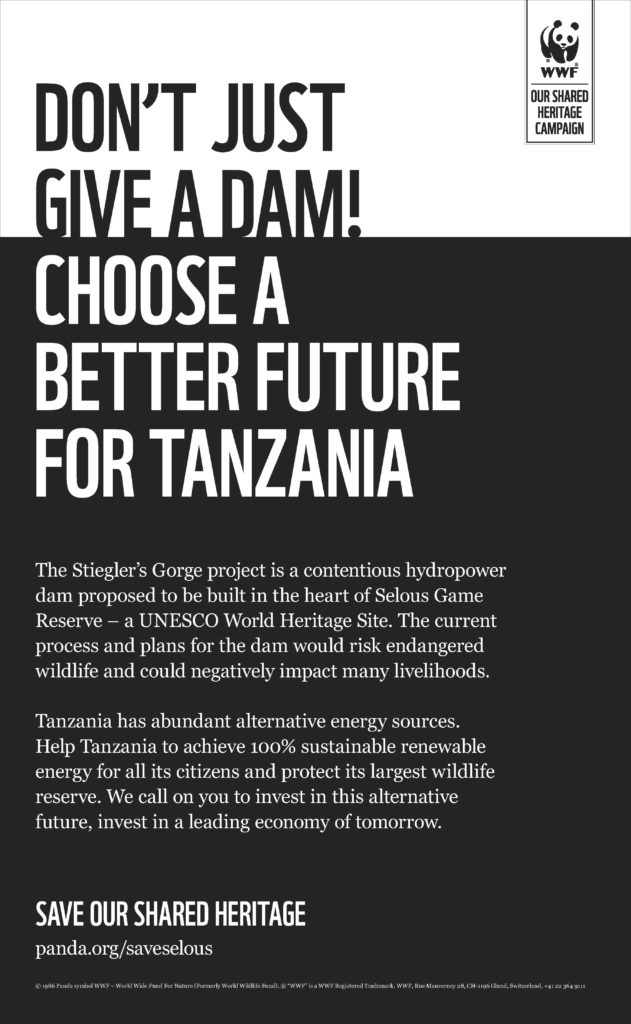 WWF has taken out two Financial Times adverts in the last four years to highlight potential developments in World Heritage Sites: oil development in Virunga National Park and the Rufiji Hydropower Project in the Selous Game Reserve. In the latest one, WWF advised for a full strategic environmental assessment to be carried out on the Rufiji Hydropower Project before construction starts. This would allow the IUCN (International Union for Conservation of Nature, the statutory environmental advisor to UNESCO World Heritage Centre) to carry out a proper analysis of the impact on the World Heritage Site’s core ecological value.

As a global environmental organisation, we also continue to highlight the increasing number of hydro projects that could impact World Heritage Sites across the globe. In Argentina, the Los Glaciares National Park is threatened by a proposed hydroelectric dam. In Kenya, the Lake Turkana World Heritage Site is threatened by the Gilgel Gibe III Dam, and UNESCO has asked for Ethiopia and Kenya to create a Memorandum of Understanding to ensure enough water is released to maintain the ecological value of Lake Turkana. And now there is a new dam proposal for the Mau Forest in Kenya that feeds the Mara River and the Serengeti World Heritage Site, impacting the world-famous wildebeest migration.

There are many threats, but we remain encouraged by the increasing global appetite to protect nature.

Financial institutions have a responsibility to ensure that their capital is being used in a sustainable way. This will reduce their risk and safeguard long-term healthy returns. Most importantly, financial institutions have a very significant role to play in contributing to future sustainable development around the world. So what can you do? Check if the risk department and sustainability team at your bank have policies and implementation steps in place to manage risks relating to industrial-scale threats to World Heritage Sites. WWF’s report How Banks Can Safeguard Our World Heritage provides some useful tips on industry best practice.