Top Posts
Banks Remain Uniquely Vulnerable to Sophisticated Cyber-Attacks
Western Banks Willing to Accept the Short-Term Pain of Russian...
Why the US Is Ramping Up Its Presence in Somalia...
How Technology Is Helping to Solve Global Supply-Chain Issues
UK Inflation Climbs to Fresh 40-Year High
Extended Reality and the Metaverse Are Leading Financial Services into...
Home Banking How Much of a Concern Is China’s Debt Problem?
Banking

How Much of a Concern Is China’s Debt Problem? 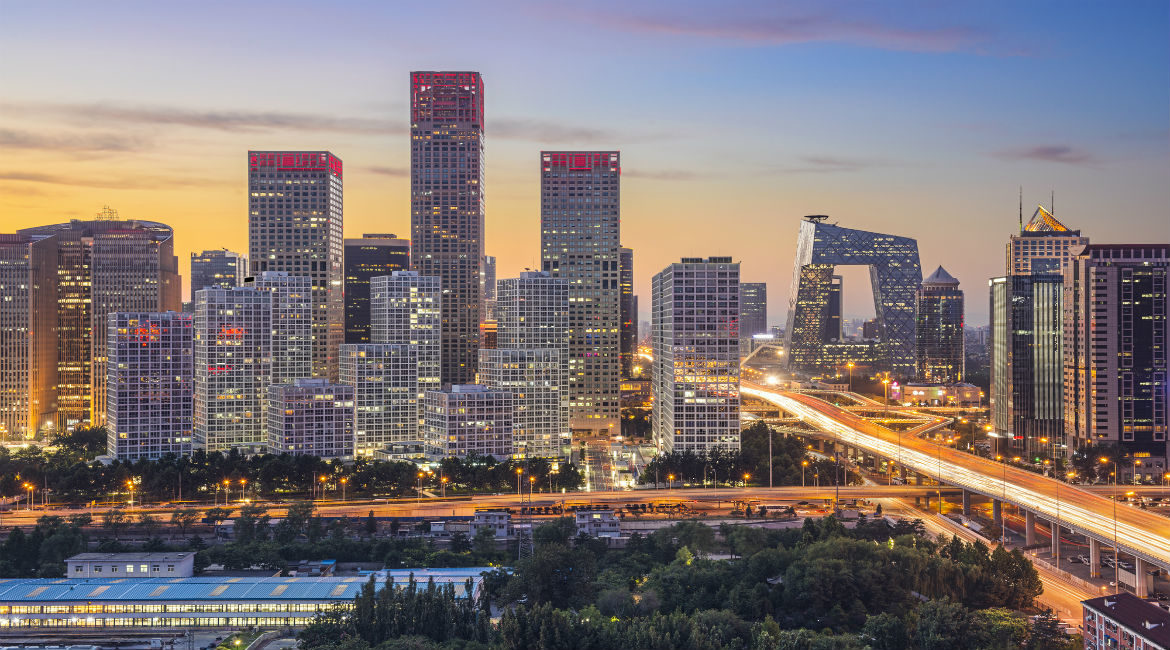 In October 2018, S&P Global Ratings issued a stark warning pertaining to China’s mounting debt problems. According to the ratings agency, the country’s local governments may be sitting on a pile of debt worth up to 40 trillion yuan ($6 trillion). Describing the problem as a “debt iceberg with titanic credit risks”, S&P analysts Gloria Lu and Laura Li observed that “the amount of debt that local governments keep off their balance sheets may be multiples of the publicly disclosed amount”, and that the ratio of government debt to gross domestic product (GDP) may well have reached 60 percent by 2017, a figure they describe as “alarming”.

Indeed, “alarming” seems an appropriate way to describe China’s accumulation of debt in recent years. After the government ordered its local states to begin construction on various public goods and services such as roads and bridges around the time of the 2008 financial crisis, the country has continued to borrow and amass debt at levels that now easily outmatch rivals such as Japan and the United States. Various recent estimates illustrate this problem. The Bank for International Settlements (BIS) records overall debt at 255.7 percent of its gross domestic product and corporate debt at 160.3 percent. The Institute of International Finance (IIF), meanwhile, recorded that between 2008’s final quarter and 2018’s first quarter, gross debt in the country surged from 171 percent to 299 percent of GDP. What’s more, this debt addiction does not appear as if it will wane any time soon.

Local-government debt represents a significant portion of that addiction, with S&P singling out local government financing vehicles (LGFVs) as being chiefly responsible for the accumulation of hidden debt. LGFVs are used to fund expenditure on local infrastructure projects; according to HSBC, such vehicles have racked up debt in the region of 30 trillion yuan, or 30 percent of GDP. The bank also asserts that when accounting for LGFV debt and special-purpose bonds, China is in fact running a fiscal deficit of around 8 percent of GDP, double the official figure, as local governments continue to keep such debt off their balance sheets to circumnavigate lending limits imposed by Beijing.

Corporate debt represents another major headache for China, with the Institute of International Finance noting that Chinese companies were the major drivers of global nonfinancial corporate debt hitting a record of 92 percent of GDP in last year’s third quarter. Bond defaults within the country also hit an annual record high in 2018 and have continued on the same trajectory into 2019, with major companies based on the mainland failing to make scheduled payments on bond placements in recent weeks. For instance, China Minsheng, a major conglomerate that focuses on diverse business sectors such as insurance, property and aircraft leasing, reportedly missed repayment on a 3-billion yuan ($442 million) private placement note in late January.

Many more borrowers are now having to face up to bond maturities this year. Indeed, Bloomberg recently noted that 13.6 billion yuan ($2 billion) of local-currency bonds have already experienced defaults on payments in 2019, which means that this year is on course to top last year’s record of 120 billion yuan, while an additional $29.5 billion worth of bonds are facing pressures on repayment, according to company and ratings-agency statements. 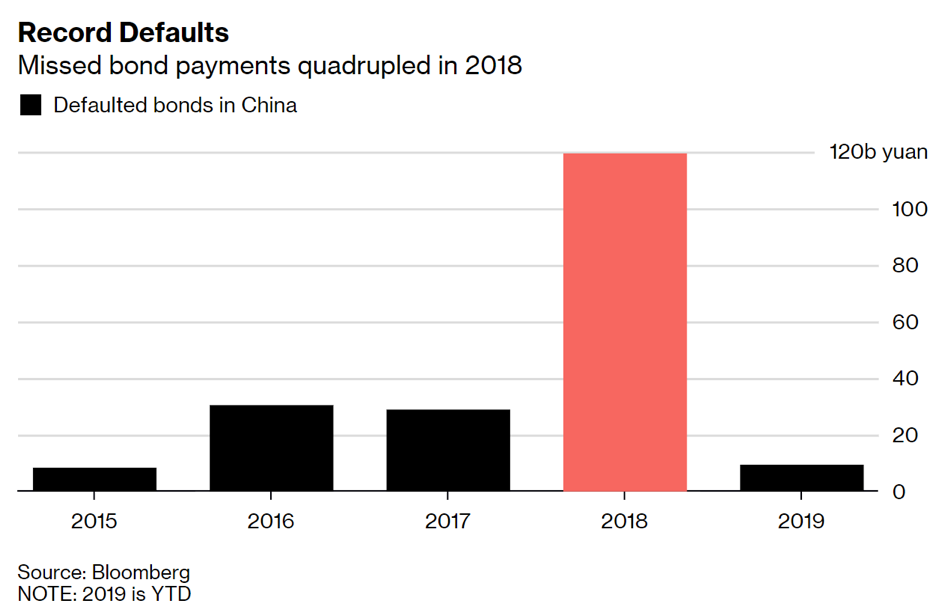 One would reasonably expect, therefore, that action will soon be taken to try and bring down the levels of outstanding debt. But looking forward, China’s problems in this sphere could well be further compounded by Beijing’s future plans. A new Morgan Stanley report indicates that regional governments and corporates are likely to increase their borrowing levels to fund their various projects in the face of trade tensions with the United States and the possible threat of an escalating trade war. Due to the weakening impact of shadow banking after a series of regulatory reforms, however, it is expected that this new debt will be more sustainable and less concerning for international investors. Nevertheless, the bank projects a 3-to-4-percent increase in the debt-to-GDP ratio over the next year.

And other nations may start to become less immune to the Chinese debt fallout, especially given the mammoth development initiatives it has planned that links many countries around the world. The Belt and Road Initiative, for example, involves China-backed development projects in a total of 78 other countries, many of which will be unable to handle the size of debts to China they will take on from such projects. Indeed, Moody’s recently calculated that the median credit rating of the 78 countries is Ba2, which is equivalent to “junk” status. Pakistan provides an ideal example of this risk, whereby the government has recently considered requesting a bailout from the International Monetary Fund (IMF) in the wake of rising imports for capital goods tied to Chinese infrastructure projects, along with debt-repayment obligations that have created a shortage of foreign currency.

Ultimately, just how problematic China’s debt woes turn out to be remains up for debate at this stage. Some believe that the overall impact will be relatively minimal, pointing to such issues as the debt being almost entirely contained within and therefore not exposed to a drying up of funds from external creditors; most corporate debt originating from state-owned enterprises, which can be easily covered by high-quality assets held by the government; and the fact that the country has a large pool of foreign reserves, including $1.15 trillion in US bonds. And with shadow-banking activity well on the way down thanks to tighter regulation, transparency in the financial system is strengthening, while systemic risk is falling.

But others point to the need for decisive policy action to be taken sooner rather than later to rein in the debt balloon. Last year’s working paper from the IMF, “Credit Booms—Is China Different?”, found that based on international experience, “China’s credit growth is on a dangerous trajectory, with increasing risks of a disruptive adjustment and/or a marked growth slowdown”. And while China’s high savings rate, current-account surplus, small external debt and various policy buffers may help to mitigate the risks somewhat, “if the risks are left unaddressed, these mitigating factors will likely not eliminate the eventual adjustment, but make the [credit] boom larger and last longer. Hence, decisive policy action is needed to deflate the credit boom safely”.

The government is certainly aware of the problem, at least in part, and some policy action has been taken. For example, state officials have now started to look seriously into various corporations’ debt burdens and their respective abilities to make outstanding repayments. The central government’s planning agency The National Development and Reform Commission (NDRC) recently launched “an offensive to guard against and dissolve major risks”. The investigation will include “enterprise bonds”, issued by state-owned companies to determine their ability to make repayments and protect bondholders. Regulators have also loosened restrictions on banks’ reserve requirements to free up more money for them to lend out.

But whether such policies are effective in successfully mitigating China’s spiralling debt woes remains to be seen. With China’s economy now decisively in a slowdown, it may well prove impossible for Beijing to turn off the debt taps.

Customer Loyalty: Still the Key To Success in the Story of Banking Disruption