Top Posts
Is It Time to Explore an Alternative to Fractional-Reserve Banking?
Can AgTech Prove Instrumental in Helping to Feed the World’s...
Can the Indo-Pacific Economic Framework Expand US Economic Influence in...
Banks Remain Uniquely Vulnerable to Sophisticated Cyber-Attacks
Western Banks Willing to Accept the Short-Term Pain of Russian...
Why the US Is Ramping Up Its Presence in Somalia...
Home Banking Investment Banking’s Changing Face
Banking 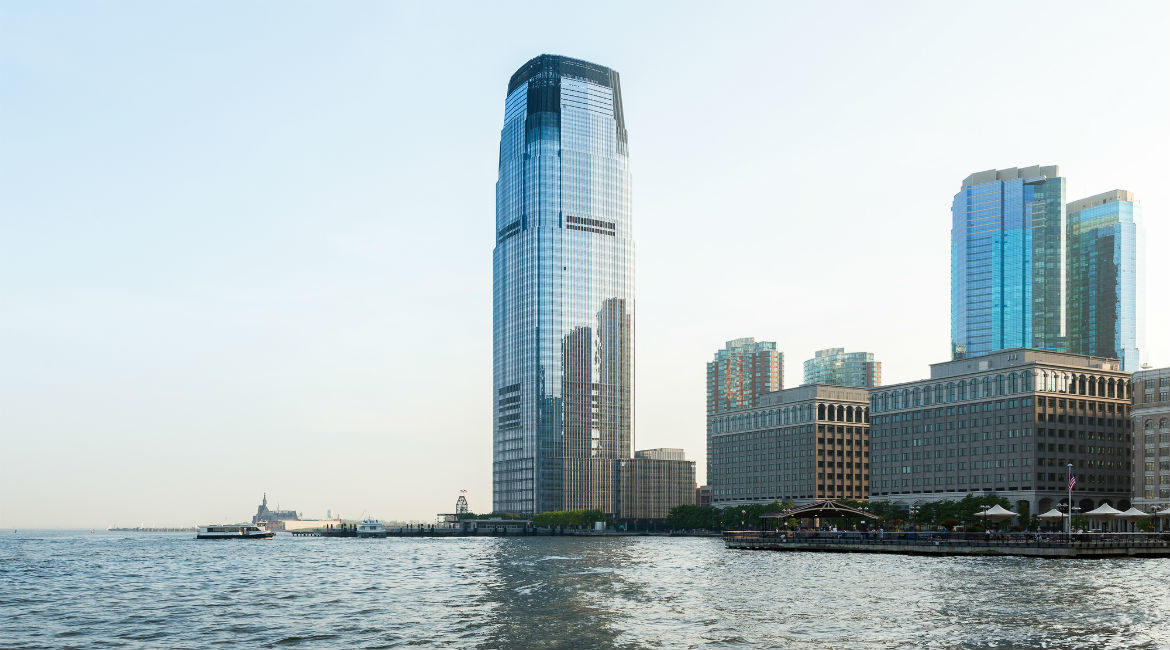 New regulatory requirements have forced investment banks to increase information technology (IT) spending. This has led to the need to incur additional costs without a corresponding gain in productivity. Instead, the installation of new computer systems has created a fresh set of problems as investment banks try to get their legacy architecture to work seamlessly with their newly acquired software. The additional costs imposed by stringent reporting requirements have also led to strain on already declining profitability.

Slump in revenues and margins

A recent report by the Boston Consulting Group (BCG) titled “Global Capital Markets 2016: The Value Migration” points out that the collective return on equity earned by the largest investment banks was only 6 percent in 2015. This is the fifth annual review of the global investment-banking business by BCG. Over the last five years, a clear trend has emerged of revenues and margins shifting from investment banks to other players in the capital-markets ecosystem.

Projections drawn up by BCG indicate that the assets under management of the buy-side players in the capital markets will touch $100 trillion by 2020, a 33-percent increase from the level of $74 trillion in 2014. Based on these projections, it is estimated that over the next half-decade, the capital-markets industry will see its revenues grow by 12 percent from $593 billion in 2015 to $661 billion in 2020. But investment banks will see a drop in their shares of the revenue pool. They will have a cumulative revenue of $205 billion in 2020, which is 31 percent of the total amount available, down from 53 percent in 2006.

One of the largest investment banks in the world, Goldman Sachs, has not been able to arrest the fall in its revenues and margins. The firm’s top line has decreased by 25 percent since 2009. Its proprietary trading and investments business generated volumes of $25 billion in 2009. This fell to $18 billion in 2010, and by 2015 it was just $5 billion. New regulatory norms have contributed in a big way to the downward trend in revenues.

Similarly, the firm’s fixed income, commodities and currency business have also been hit and recorded negative growth over the last seven years. In 2009, this segment’s revenues were $22 billion. During the first nine months of the year, this fell to $5.6 billion. 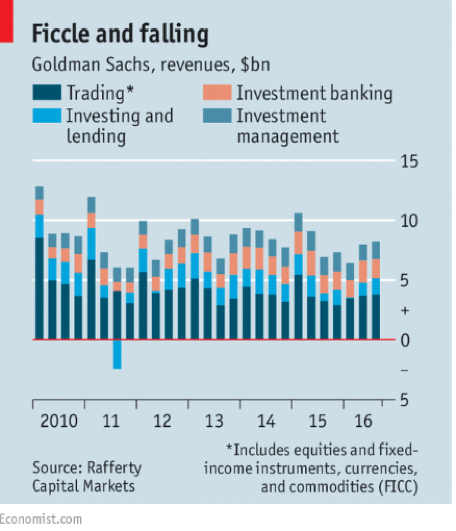 A report in The Economist states the only business in which Goldman Sachs has been able to maintain its lead is that of advising clients on important transactions. Many of the world’s leading companies utilise the services of the firm when they require guidance on mergers and acquisitions.

Trading income has been severely impacted.

Investment banks are seeing a steady decline in their trading revenues. According to an Accenture report, equity-trading commissions in the US are now at an average of 2.64 cents per share (cps) for “all-in” rates. The average amount charged for algorithmic trades in which the research costs are charged separately is only 0.97 cps.

There is more bad news on the way for global investment banks. In January 2017, the Markets in Financial Instruments Directive II will come into effect in Europe. This will require that research costs and trading commissions be unbundled. The move is widely expected to push trading commissions down. It is estimated that revenues from this activity could fall by as much as 33 percent.

The track record of investment banks since the great financial crisis of 2008 clearly shows that unless they adopt a new set of strategies, they will continue to see their market shares shrink. Their traditional practices, which included not charging clients for various types of research with the expectation of making this up through increased levels of income from trading, may not work very well in the current environment. Instead, investment banks will need to think of ways to monetise the different services and data that they provide to customers.

One area upon which investment banks will need to lay great stress is technology. Unless they are able to keep pace with the level of service that new financial-technology companies, or fintechs, are providing, investment banks will find it difficult to compete. Some incumbents have realised this and are attempting to stay at the forefront of technological advances in their areas of operation. A recent report in the The Wall Street Journal reveals that the number of sales, trading and research positions vacant at JPMorgan Chase is only 123. But the firm has 2,000 technology-related vacancies.

Positive Approach!
Completely agree with all the points mentioned.
Future is always in the Evolution. Investment Banking have to leave behind the traditional modes of operations. Investment Banking has to tackle the challenge of heavy cost by presenting their value preposition. No choice, Digitization is the must, for this vast and agile market.