Top Posts
Digital Transformation For Financial Systems In A Changing World
How Gamification is Catapulting Digital Banking to the Next Level
Challenges Remain, But There Are Opportunities to Be Had in...
Interview with Mr. Olukayode Pitan, Chief Executive Officer and Managing...
Commodities Outlook for 2023
The Value of Cash in a Time of Crisis: How...
Home Banking Lessons from a Lender Down Under
Banking

Lessons from a Lender Down Under 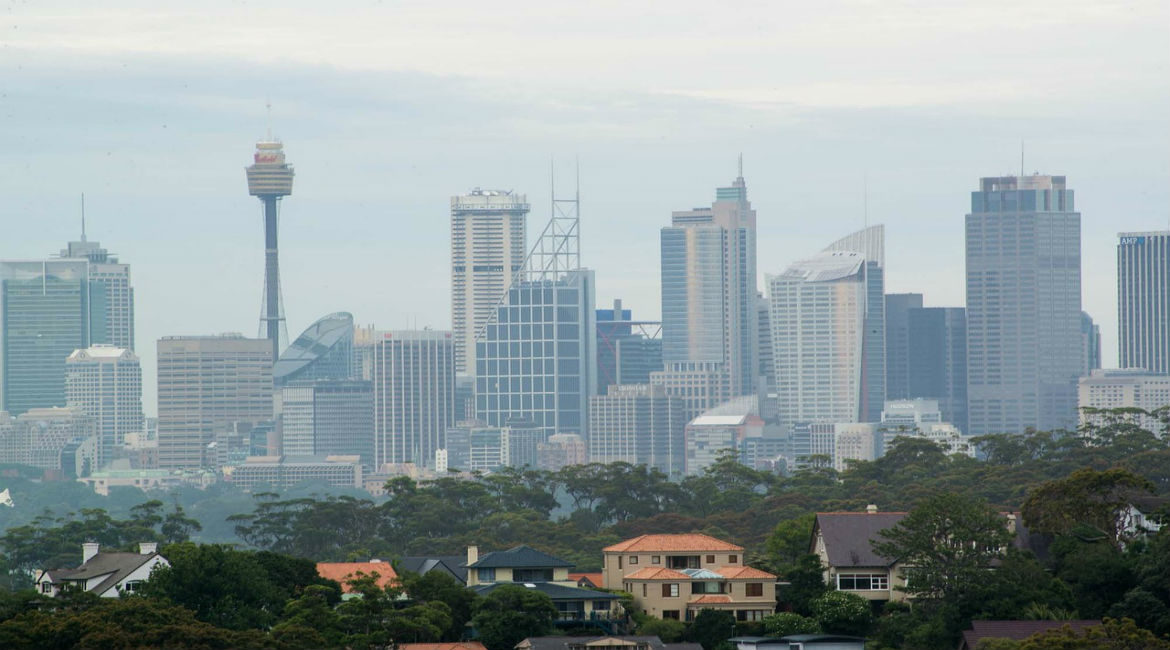 Australia navigated the rapids of the global financial crisis (GFC) with considerable grace relative to other nations. Despite the intense buffeting that most Western economies experienced, Australia avoided sharp property-value declines, high unemployment and a resultant recession. This article explores the reasons for such a strong performance in their mortgage market, and the lessons to be drawn by other countries.

Australia has a long history of relatively conservative mortgage banking. The industry is dominated by the “four pillar” banks, which provide a backbone of strong balance sheets and compliant, conservative operation under the watchful eye of APRA (Australian Prudential Regulation Authority), their primary regulator. In the 1990s, the banks’ dominant market position led to impressive gross mortgage margins of more than 4 percent for prime residential products, and, as securitisation technology expanded from the US and Europe, the non-bank industry emerged to exploit the attractive net margins available. Australian residential mortgage-backed security (RMBS) bonds became a favourite for local and international investors, and by the mid-2000s, Australia was the third-largest issuer of RMBS globally.

The mortgage-broker market first emerged in Western Australia in the early 1990s, and spread eastward, steadily expanding its market share but never overtaking the banks’ powerful branch network as the primary origination channel. Whilst relatively lightly regulated, many brokers adopted a conservative business model of earning their revenue from originated loans over time, so-called “trailing commission”. Through a blend of lower upfront commissions and a “trail”, brokers could both cover their own origination costs and create an attractive annuity stream, giving them an ongoing relationship with both lender and borrower, and a more valuable, stable business. This reduced the attraction of churning loans, and because a trail was only paid on a performing loan, it gave the broker an interest in both the origination and the future performance of the loan. 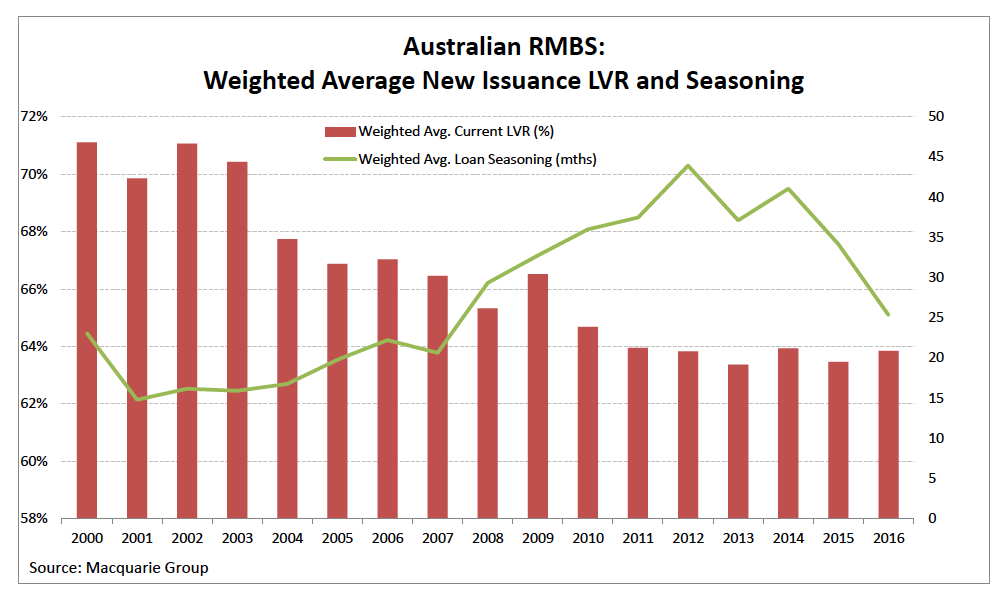 Lending to consumers was governed by the Uniform Consumer Credit Code (UCCC), a relatively simple but highly effective structure that applied to all residential mortgages extended for domestic (i.e., non-investment) purposes. The penalties for non-compliance of the UCCC could include the setting aside of a loan repayment obligation, a stiff penalty for a mortgage lender! Amongst other things, the UCCC required that lenders act “conscionably” in relation to borrowers, although they left the definition of conscionably deliberately vague. Each lender had to form its own view in relation to passing this hurdle, knowing that the forfeit for getting it wrong could be severe.

The nonconforming, sub-prime or specialist lending market arrived in the late 1990s, with the launch of several new non-bank lenders including Bluestone, Liberty, Pepper and GE. Most specialists adopted a model of funding originations from warehouse lines of banks, and refinanced these periodically into the rapidly expanding RMBS market. Unlike the broader market, mortgage insurance was not typically required or available on nonconforming loans, so credit enhancement in securitisations was created via subordinated bond classes. Whilst the sub-debt market was relatively immature in Australia at the time (given the dominance of mortgage-insured collateral), investors quickly appreciated the credit diversity and yield pickup of the subordinated bonds. AAA enhancement levels (the percentage of the capital structure required to support the AAA bonds) were typically 12 to 15 percent. Standard & Poor’s, Moody’s and Fitch all operated in Australia, publishing both prime and nonconforming ratings criteria and providing close oversight of the origination and servicing platforms. Ratings criteria emphasised security location (Australia is a large country and some regional markets are highly illiquid, leading to higher market-value decline potential), serviceability, employment type and prior borrower credit impairment.

The dominant national credit agency primarily captured negative credit information (defaults and judgments), with minimal positive credit information available. There was no FICO or similar universal description of borrower quality, leaving it up to the various lenders to determine the relative riskiness of customers and lend to them within the UCCC framework. The residential-property market grew strongly through the 2000s, but not to the extent of the US. More importantly, equity-release and cash-out strategies were less popular. The Australian population tended not to fund their lifestyles by drawing heavily on equity built up in their homes via cash-out refinancing. 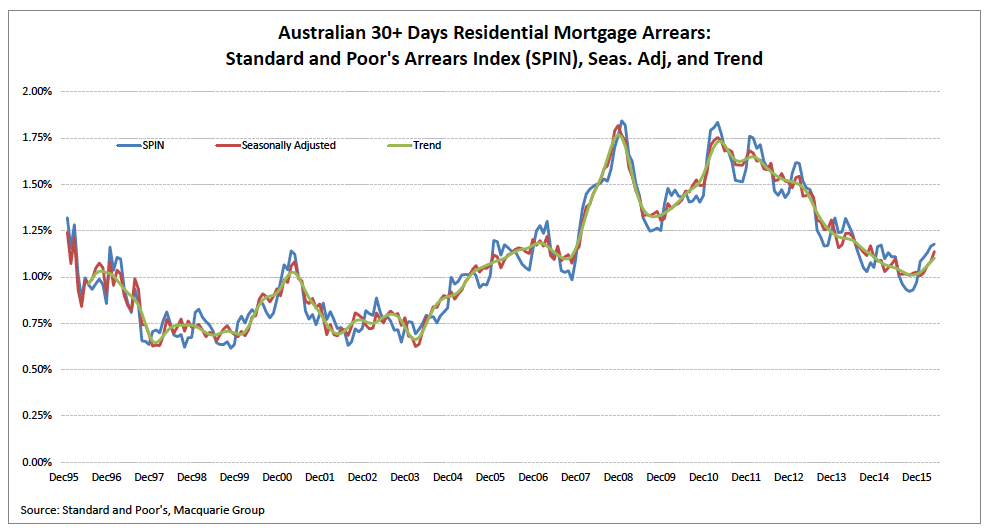 When the global financial crisis hit Australia’s debt markets in 2007, the mortgage market (and broader economy) was relatively well-positioned for the storm that was about to erupt. Unlike the US and to a lesser extent the UK, loan to value (LTV) ratios in the originated portfolios were relatively low, with seldom more than 25 percent of a pool exceeding 80 percent LTV, and averages in the low 70s. Few lenders had strayed into the “No-doc” or NINA (No Income, No Assets, considered by some to be the high or low watermark in US sub-prime lending) space, due to the banks’ requirement to act “conscionably” under the UCCC. The nonconforming market never exceeded 5 percent of the total market, which was significantly less than the 20 percent+ that the US market peaked at.

The participants in the intermediated value chain in Australia (borrower-broker-lender-investor) were often connected by the trailing-commission structures and had their interests tightly aligned. This was in contrast to many of the whole-loan models in the US, which often resulted in the originating parties having little “skin in the game” once they’d sold the loan to the correspondent lenders or investment banks. Most importantly, loan portfolios (both prime and nonconforming) continued to perform relatively strongly, due to the prudent lending practices applied. Property prices did not drop sharply in Australia and unemployment remained relatively muted, meaning mortgage portfolios generally performed strongly.

This relatively strong loan performance meant that warehouse funders did not have to lean on the representations and warranties made by originators and force non-compliant loans back upstream. It was the forced re-purchase of non-compliant loans by warehouse providers that ultimately led to the failure of many non-bank lenders in the US during the financial crisis.

Downstream in the capital markets, Australian bonds continued to perform well due to the strong underlying collateral and relatively simple structures. CDO (Collateralised Debt Obligations—the issuance of highly rated bonds secured on a diversified pool of  subordinated bonds. Whilst the rating agencies’ primary criteria proved fairly robust through the GFC, CDO or second order securitisation proved to be significantly less so.) structures were relatively rare due to the relatively limited size of the subordinated bond market, with most subordinated bonds being purchased by “real-money” investors. As the crisis intensified, the Australian government quickly moved to stabilise the four pillars and the broader banking system, effectively providing them with a “community guarantee” (which they still enjoy) and large windows through which to fund cheaply. The government’s support of the non-bank industry was significantly lighter, and although they did put in place an RMBS bond-purchase programme, it was of limited size and restricted to highly rated, mortgage-insured bonds, leaving the specialists to largely fend for themselves.

To surveil the Australian mortgage market now is to somewhat step back in time to the mid-1990s. Primary bond issuance was reduced radically between 2008 and 2012, and with it, the non-bank lenders’ market share. This vacuum has been filled by the banks, which have reasserted their dominance. Primary issuance is now relatively muted, and the cost of borrowing is high, making it difficult for prime non-bank lenders to generate a positive margin, although the specialists with their higher retail margins remain viable. There has been consolidation amongst the intermediaries, with the major banks acquiring many of the broker “aggregator” businesses to supplement their branch networks. Trail commissions remain popular, although exit or “deferred establishment” fees have been curtailed, meaning prepayment risk must be borne by lenders and reflected through higher retail interest rates that all borrowers effectively pay.

Australia’s prospects are tightly linked to China, and as this important market slows, the country is facing some headwinds. Fundamentally, Australia remains a highly desirable place to live, however, with an open, tolerant culture supported by intelligent, “firm touch” regulation and strong governance. These enduring qualities make it a sensible destination for international capital.

1MDB: the saga so far