Top Posts
Challenges Remain, But There Are Opportunities to Be Had in...
Interview with Mr. Olukayode Pitan, Chief Executive Officer and Managing...
Commodities Outlook for 2023
The Value of Cash in a Time of Crisis: How...
The US-Africa Leaders Summit: Fostering a Closer Relationship with the...
Three Key Sectors in Which to Invest in 2023
Home Banking Monetary Policy Dilemma in Latin America and the Caribbean: To Raise or Not to Raise Policy Interest Rates
Banking

Monetary Policy Dilemma in Latin America and the Caribbean: To Raise or Not to Raise Policy Interest Rates 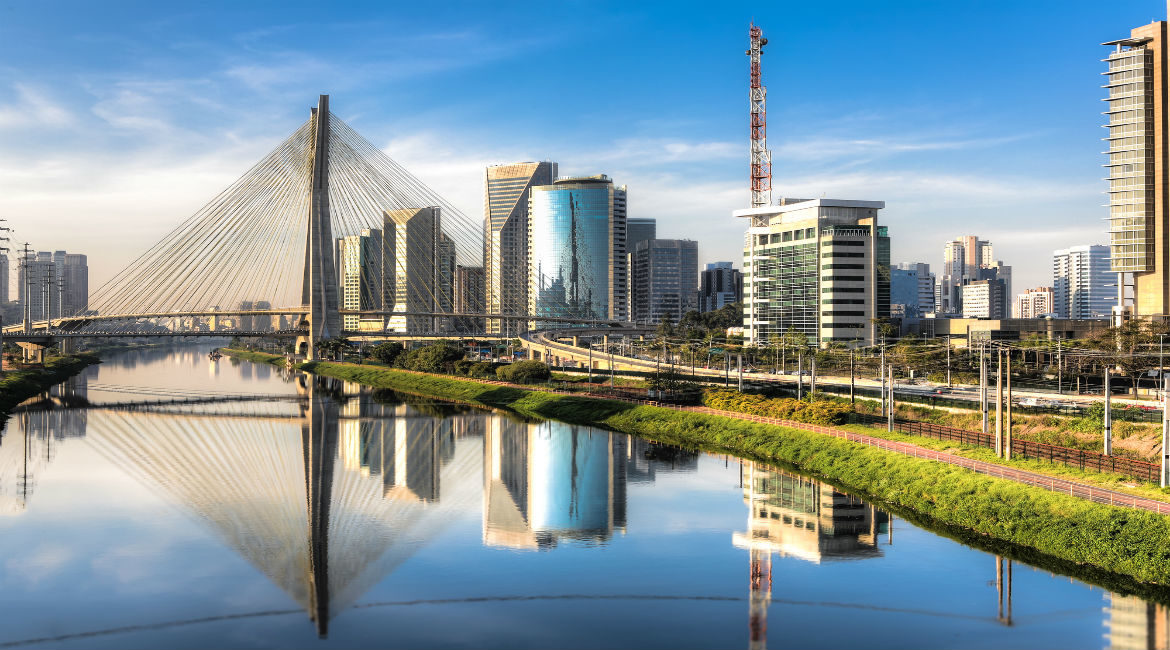 By Carlos Végh, the World Bank Chief Economist, Latin America and the Caribbean

After an unprecedented decade of essentially zero policy interest rates, central banks in industrial countries, particularly in the United States, have begun to “normalize” monetary policy. Such normalization entails not only increasing policy rates to more reasonable levels—given the widespread recovery of the world economy and the emergence of inflationary and nominal wage pressures—but also starting to shrink the extremely large balance sheets that resulted from unconventional monetary policy. Recall that just the US Fed’s balance sheet skyrocketed from $1 trillion in 2008 to $4.5 trillion in 2014, almost a fivefold increase.

As monetary-policy normalization gathers momentum during 2018 and will be fully fledged by 2019, international interest rates will increase, making financial investments in particularly the United States more attractive and reducing net capital inflows into Latin America and the Caribbean (LAC). In addition, higher international interest rates should lead to currency depreciation, higher inflation and a fall, or at least sharp deceleration, in economic activity in LAC countries.

Faced with a depreciating currency and a fall/deceleration in economic activity, central banks in LAC will face—as at many other times in the past—a critical dilemma: (i) should they increase policy interest rates to defend the currency/fight inflation at the cost of aggravating the recession/slowdown (i.e., procyclical monetary policy, as it reinforces the underlying business cycle)? or (ii) should they reduce policy interest rates to prop up the economy, even if this may lead to further currency depreciation/inflation (i.e., countercyclical monetary policy)?

It is worth noticing that this monetary-policy dilemma is unique to LAC countries (or, more generally, emerging markets) and not industrial countries. Industrial countries do not face this dilemma because (i) the exchange rate is not at the top of central banks’ concerns and (ii) more fundamentally, output and inflation move in the same direction (as opposed to developing countries, in which good times are typically accompanied by low inflation and bad times by high inflation). In industrial countries, therefore, reducing (increasing) policy rates in bad (good) times kills two birds with one stone.

This monetary-policy conundrum faced by LAC countries is, without a doubt, the biggest monetary-policy challenge faced by the region. In fact, this policy dilemma has been playing out already since 2014, when the decade-long commodity-prices boom came to a screeching halt. Since then, central banks in LAC have literally agonized as to what to do. Most countries, in fact, have followed what we have dubbed “the cycle within the cycle” (in reference to a monetary-policy cycle within the business cycle). Brazil offers perhaps the best example, as illustrated in Figure 1. 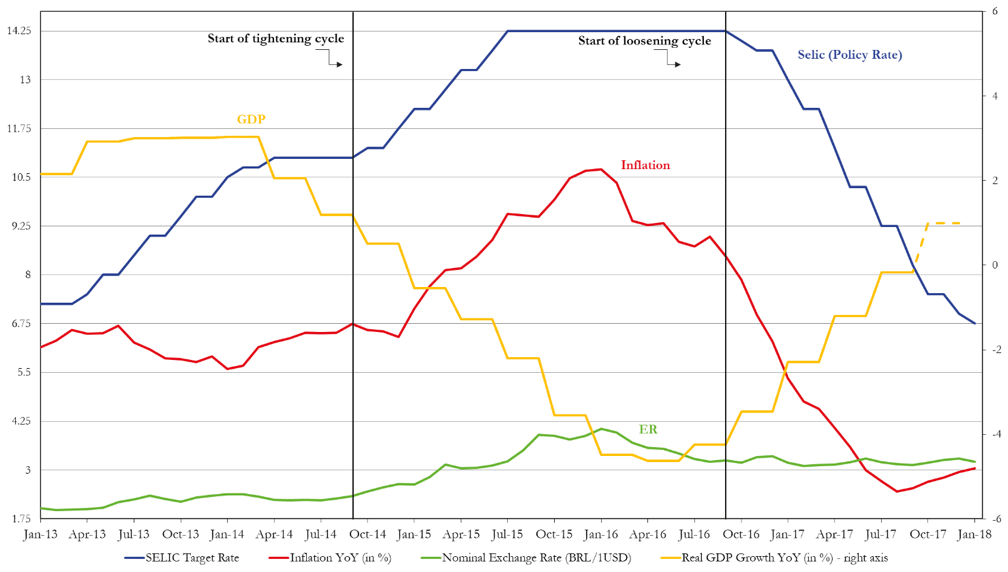 In this plot, the yellow line denotes the four-quarter change in real gross domestic product (GDP), the red line is the year-on-year inflation, the green line is the nominal exchange rate, and the blue line is the SELIC (the policy rate that is the main policy instrument of Brazil’s central bank). We can see that when commodity prices drastically fell in 2014, the nominal exchange began to increase (i.e., the Brazilian real started to depreciate quite a bit), inflation took off, and real GDP started a long downward spiral. In spite of a falling real GDP, the central bank initiated a long and tough two-year tightening cycle that took the SELIC from 7.25 in March 2013 to 14.25 in July 2015. By October 2017, the nominal exchange rate had stabilized (and actually the real had appreciated a little bit), and inflation was under control. At that point, therefore, the central bank started an equally aggressive loosening cycle that has taken the SELIC to 6.75 in little more than a year.

In sum, we can clearly see in Brazil a monetary-policy cycle that started in 2013 with a severe tightening to support the domestic currency and fight inflation, even at the cost of aggravating the recession, followed by aggressive loosening that has helped economic activity recover quite drastically. In other words, Brazil’s central bank first prioritized the defense of the currency and the fight against inflation, and only later, after one of the worst recessions in the country’s history, turned to countercyclical monetary policy. This clearly illustrates how much weight LAC countries put in defending their currencies and fighting inflation, no doubt the product of a painful legacy through which sudden bursts of financial instability have given way to full-fledged crises. A similar story could be told, for instance, for Colombia and Mexico.

In sharp contrast, Chile reacted to the fall in GDP and increase in inflation and the exchange rate in exactly the opposite way. Indeed, starting in October 2013, Chile began to drastically reduce the monetary-policy rate from 5 to 2.5 in May 2017. In other words, Chile pursued a countercyclical monetary policy throughout the business cycle in a clear attempt to stimulate economic activity and without fearing further inflation or depreciation of the currency. This is, of course, what central banks in developed economies do: reduce policy rates in bad times and increase them in good times. 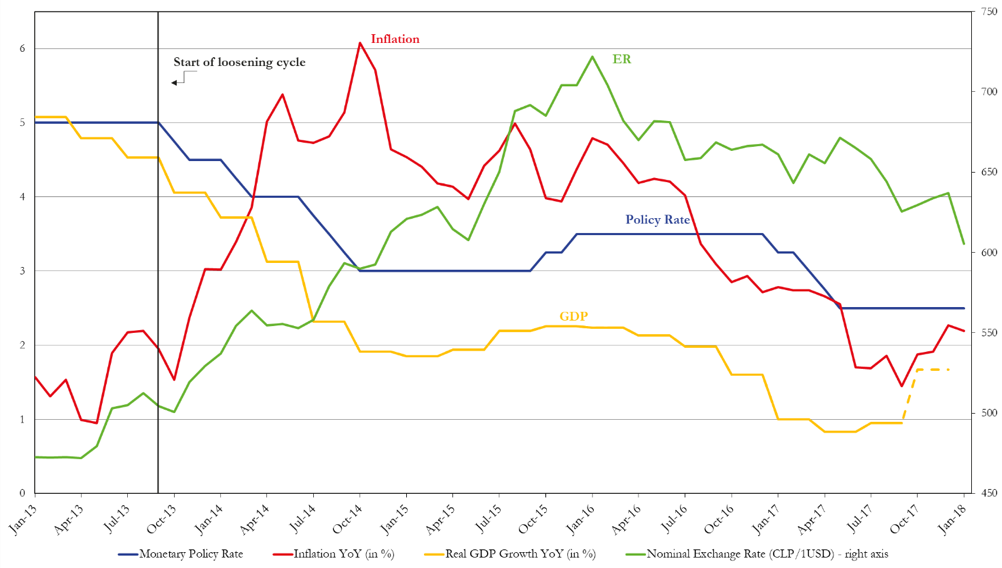 Given this tale of two groups of countries (the likes of Brazil, Colombia and Mexico) on the one hand and Chile on the other, a natural question arises: Why do not all central banks act like Chile and try to use monetary policy to stimulate economic activity as soon as a bad shock hits? After all, adding fuel to the fire by increasing policy rates in the midst of a recession seems to defy basic Keynesian prescriptions and make the underlying recession worse. In fact, our analysis indicates that about half of all emerging countries have pursued procyclical monetary policy (such as Brazil, Colombia and Mexico) during the period 1960-2006.

The reason is that many emerging markets (EMs) greatly fear currency depreciation. For starters, both private and public agents in EMs often have a considerable amount of debt denominated in dollars (the so-called liability dollarization). Any currency depreciation will increase this debt burden. More fundamentally, countries with poor macroeconomic policy credibility and weak central banks are afraid (and often rightly so!) that financial markets may view any currency depreciation as indicating loose financial policies, which may, in turn, lead to further currency depreciation and capital outflows. Under these circumstances, many EMs see no choice but to increase policy rates to defend the domestic currency immediately after a negative shock hits.

In sharp contrast, countries such as Chile have had literally decades of extremely sound and credible macroeconomic policies and, hence, markets view some currency depreciation as part of the normal process of adjustment to a negative shock and hence do not react in a way that would amplify the initial shock. As a result, Chile can afford the luxury of acting countercyclically, as developed countries do.

In sum, the procyclicality of monetary policy observed in EMs is a scourge, product of decades of poor and non-credible monetary policies that, hopefully, the region will be able to overcome thanks to the much more solid policies of recent years.

“Between a rock and a hard place: The monetary policy dilemma in Latin America and the Caribbean” (Office of the Chief Economist for LAC, April 2017), available online at https://openknowledge.worldbank.org/handle/10986/28443.

A Closer Look at Venezuela’s “Petro”