Top Posts
Western Banks Willing to Accept the Short-Term Pain of Russian...
Why the US Is Ramping Up Its Presence in Somalia...
How Technology Is Helping to Solve Global Supply-Chain Issues
UK Inflation Climbs to Fresh 40-Year High
Extended Reality and the Metaverse Are Leading Financial Services into...
Digital Currency: India’s Move Towards a Digital Financial System
Home Banking Monetary Policy: Valentine for Trump
Banking 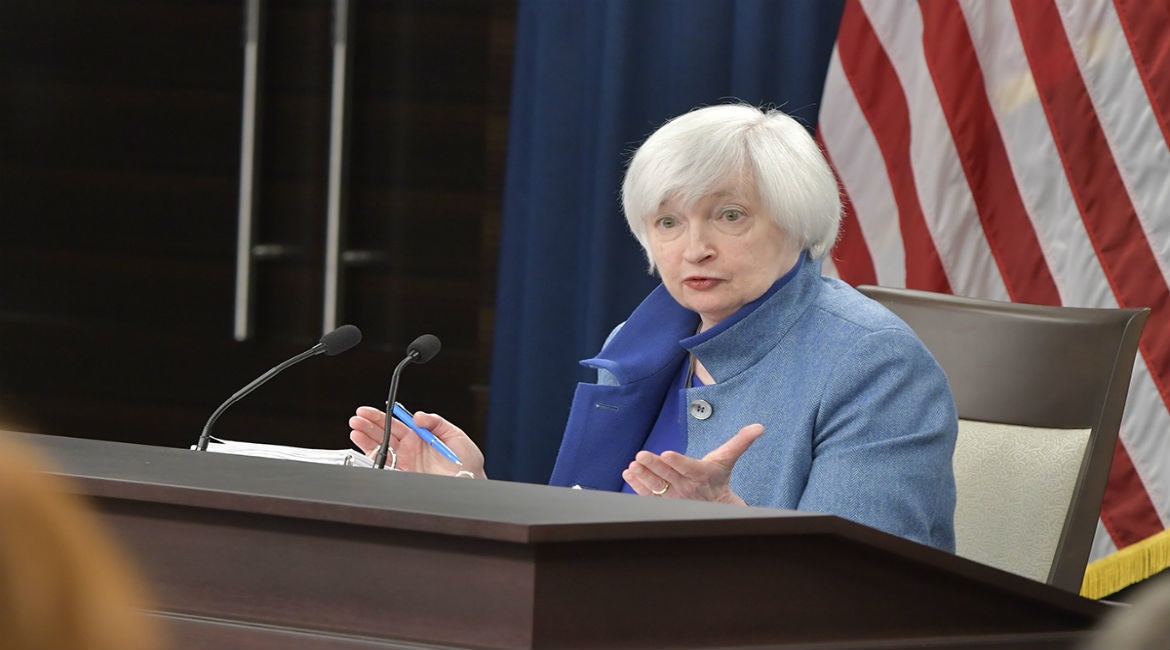 United States President Donald J. Trump received an unexpected valentine last week from Janet Yellen, chair of the Board of Governors of the Federal Reserve System. The higher interest rates President Trump pledged through jawboning the Federal Reserve are coming. Chairperson Janet Yellen, a recognised monetary dove, confirmed this in the semi-annual monetary-policy report to Congress.

In testimony before the Senate Committee on Banking, Housing and Urban Affairs, Yellen stated, “Further evolution in the economy will warrant gradual increases in the Federal Funds rate”. The Fed now confirms it is in a tightening cycle after lifting rates in December for the first time since 2006. But as always, when the next rate increase will be is data dependent. But the actual monetary-policy stance is still very accommodative. This is the conundrum facing the Fed: Whereas many forecasters have lifted growth prospects for the US economy since the Electoral College majority vote for President Trump, the Fed has not made any adjustments in its growth forecasts.

Chairperson Yellen recognises the need not to fall behind the curve, although the economy still requires confirmation that the shallow rebound since the Great Recession will suffice to grind towards the dual-mandate targets of maximum employment and stable prices. “Waiting too long to remove accommodation would be unwise, potentially requiring the FOMC to eventually raise rates rapidly, which could risk disrupting financial markets and pushing the economy into recession”, Yellen said in prepared remarks.

What is on the Fed’s side is the possibility of timid wage growth; this will give it some time for pause. However, should the equity bulls be right and fiscal policy delivers a punch combined with the possibility of a border tax that gives a boost to import prices, and rising costs push inflation, the Fed may have its back against the wall. Macroeconomic data released last week confirmed the schizophrenic nature of the economy. Headline inflation at 2.5 percent was ahead of expectations and the highest since March 2012. The Empire State Manufacturing gauge climbed to 18.5 (6.5 expected)—the biggest increase since September 2014. But the larger picture on the flipside of the coin shows the anomaly: After 30 quarters of recovery, the official unemployment rate (U3) is at a level similar to the low of the previous upswing; U6 at about 9.2 percent is still 1.3 percentage points above that of the 2001-07 upswing. (U6 includes discouraged and marginally attached workers plus part-time workers purely for economic reasons—in other words, involuntary part-time workers.)

The political backdrop is also a cause for concern for Chair Yellen. Although investors are bent on President Trump’s stance on massive infrastructure spending as well as major tax reform, Yellen is walking the middle ground. Investors are driving the equity train in a Trump melt-up. In February, a new record for the Dow Jones Industrial Average (DJIA) was achieved with the longest streak of record-closing highs in 25 years. From the low before the election, the DJIA has now climbed more than 15 percent in about three months. But the big question is whether all the president’s men will sing from his song sheet. It is also the timing factor of when legislative and budget proposals can be implemented. This leaves a question behind any impact of infrastructure in 2017. The question remains whether a huge fiscal expansion is appropriate this late in the economic cycle.

In the question and answer session before the Senate Committee on Banking, Housing and Urban Affairs, Yellen reiterated that decisions on interest rates will be driven by trends in the economy, not by speculation about possible changes in fiscal policy. In her prepared remarks before the Senate committee, she expressed her hope that changes in fiscal policy will be consistent with putting US fiscal accounts on a sustainable trajectory. She also confirmed that the current fiscal trajectory of the US is unsustainable. Further, the White House is causing crosscurrents for monetary policy. Asked about the stance of the Federal Reserve on potential new immigration policies, Chairperson Yellen stated that slowing immigration will slow economic growth. This is also a cause for concern in Silicon Valley with its shortage of skilled information-technology engineers.

Financial markets expect two to three interest-rate hikes in 2017 and further hikes in 2018 to get closer to the Fed neutral rate of interest, targeting a two-percent inflation rate over the long run. Chair Yellen reiterated in the question and answer session that the economy “must be on a solid course” before the Fed will stop the reinvestment of maturing principal debt, thereby bringing the balance sheet under control in an orderly fashion. The target is to have only Treasury instruments on board; balance-sheet fluctuations must not be seen as part of monetary-policy implementation; and Treasury debt on the balance sheet will not be sold but be allowed to roll off. Given the size of the balance sheet and the continuous reinvestment of assets, the Fed is arm’s length from tapering.

A further consideration for Chair Yellen is President Trump’s quest to reduce banking regulation. The anomaly of the Dodd-Frank legislation is agency debt: Fannie Mae and Freddie Mac were left in a cloud of uncertainty. Alleviating smaller banks of regulation poses the question of where lines will be drawn so as not to allow a repeat of the biggest cause of the Great Recession: banking uncertainty and the “too big to fail” syndrome.

Chair Yellen confirmed she will see her time through until February 3, 2018, when her appointment ends. Notwithstanding the independence of the Federal Reserve, President Trump will have his fingerprints all over it. In all probability, she will not be re-appointed. All eyes are set on who will be appointed by President Trump for the position of vice chair. Whether the new faces in the Federal Reserve will add some “colour” is questionable. Of the 134 presidents in the Federal Reserve Regional Banks’ history, none have been African-American or Latino. This leaves a question mark behind the real demographic transparency and representation of the US Federal Reserve.