For over five and a half decades Nucor Corporation (NYSE:NUE) has been producing steel and manufacturing steel related products. With its three strategic business units (SUBs), operating steel mills, manufacturing steel made goods and producing raw materials such as direct reduced iron (DRI), Nucor is one of the top North American scrap recyclers, as they use scrap steel as one of their crucial unprocessed materials. Nucor is also well known for using environmentally friendly “mini-mills” for large scale production of steel in the United States. 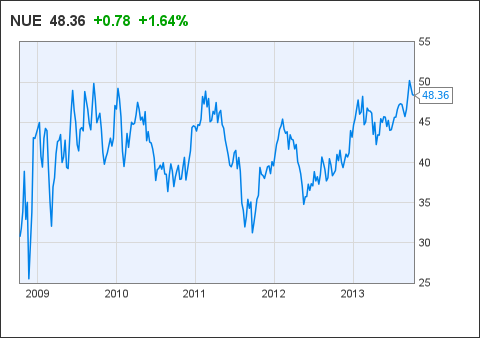 Since publication of Q2 earnings results, Nucor’s stock price has performed very well climbing from $43.84 on July 1, 2013 to $50.87 (year to date high) on September 18, constituting a 16.04 percent increase in market capitalization. 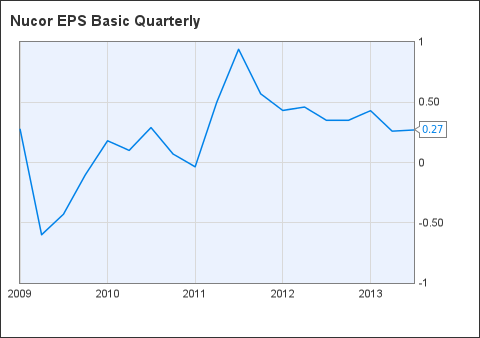 The company announced projected Q3 financial report (guidance) on September 18, 2013 and since then the stock had been trending down from the high of $50.87 and currently trading at $48.38 per share. The stock price didn’t register any significant upward thrust from the news that expected earnings are to reach the range of 35 cent to 40 cent per share in Q3’13 compared to mere 27 cent per share in Q2’13. This is probably due to expected weak results from its raw material business operations in the third quarter. Nucor is in the middle of starting a new direct reduced iron (DRI) plant in Louisiana and higher start-up cost of this plant have taken a toll on their balance sheet as it invested US$ 750 million for the plant though Nucor Steel Louisiana LLC, a wholly-owned subsidiary of Nucor.

The board of Directors of Nucor Corporation declared its 162nd consecutive cash dividend, $0.37 per share on September 4 2013 for common stock holders. Persistent achievements like this have kept long-term stable investors rallying behind this company for over four decades. 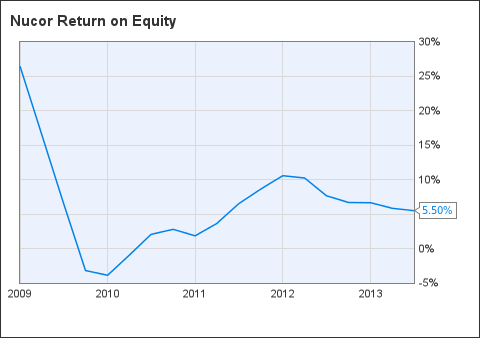 Historically, Nucor have done outstandingly well to maximize investor’s value. While the sub-prime crisis almost led the United States to a depression, Nucor’s Return on Equity (ROE) was at 25 percent! It was briefly negative due to the recession. However, when all Wall Street analysts were concerned about the economy back in 2010, Nucor’s ROE climbed above negative and had settled upon 5.5 percent in Q2’13 after reaching the high of 10 percent in early 2012.

Once steel was the backbone of the American economy and although the U.S. automobile industry has been losing market share to Asian rivals in recent years, steel is still a very important facet of the economy. With a rebounding housing market, demand for steel shall be stable. However, concerns loom over increasing mortgage rates.

Moreover, Nucor has been increasing focused on more value-added steel goods compared to its cash-cow of raw material production and raw steel products. Adding more value-added goods to its product portfolio will likely increase profitability and deliver high revenue growth to the bottom-line as this will allows Nucor to add better margins compared to raw steel products.

Nucor has always focused on growing its business with an emphasis on improving efficiency. It has made several large scale acquisitions to improve its business process. For example, it bought Skyline Steel, a steel-foundation distributor, in June 2012 at a cost of US$684 million in an effort to streamline its product and distribution network across United States.

In the long-term, Nucor is set to reduce the cost of production having just signed a two decade contract with EnCana (NYSE:ECA) ensuring the stable supply of natural gas to its steel mills and DRI plants. The deal provides EnCana with US$ 542 million over the next two years along with a total investment of US$ 3.64 billion during the 22-year agreement. Under this agreement EnCana will operate several natural gas drills will which provide Nucor with a reliable, low-cost, source of energy. This deal will help Nucor to reduce its cost of production in the long-run and this should start to reflect in earnings from 2014 onwards.

Nucor has also made substantial improvements without a research & development budget in the efficiency of its “mini-mill.” According to a by Brian K. Boyd, this feat is not only unprecedented but it shows the resilience of Nucor as the second largest steel producer in the United States. 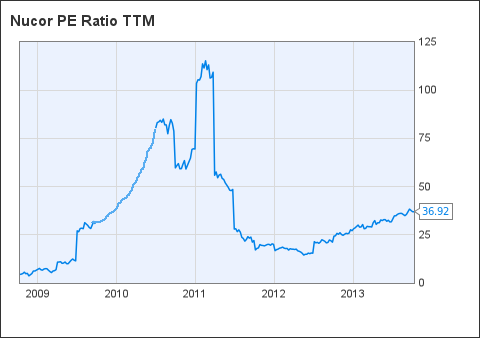 With a current PE ratio of 37.22, new investors might consider this company expensive. However, historically, Nucor’s PE ratio has been much higher (Figure 4), even higher than 110! With a rebounding US economy, considering the historical perspective of Nucor’s PE ratio, the current levels seem like naturally low at the moment.

For investors who prefer to earn a decent and steady dividend, Nucor Corporation has provided a superb 3.1 percent yield over the last forty years. Regardless of high PE, this company is a highly recommended buy under the circumstances.