Top Posts
Challenges Remain, But There Are Opportunities to Be Had in...
Interview with Mr. Olukayode Pitan, Chief Executive Officer and Managing...
Commodities Outlook for 2023
The Value of Cash in a Time of Crisis: How...
The US-Africa Leaders Summit: Fostering a Closer Relationship with the...
Three Key Sectors in Which to Invest in 2023
Home Banking Scrutiny on Sustainability Issues Leads Banks to Respond Via Social and Digital media
Banking 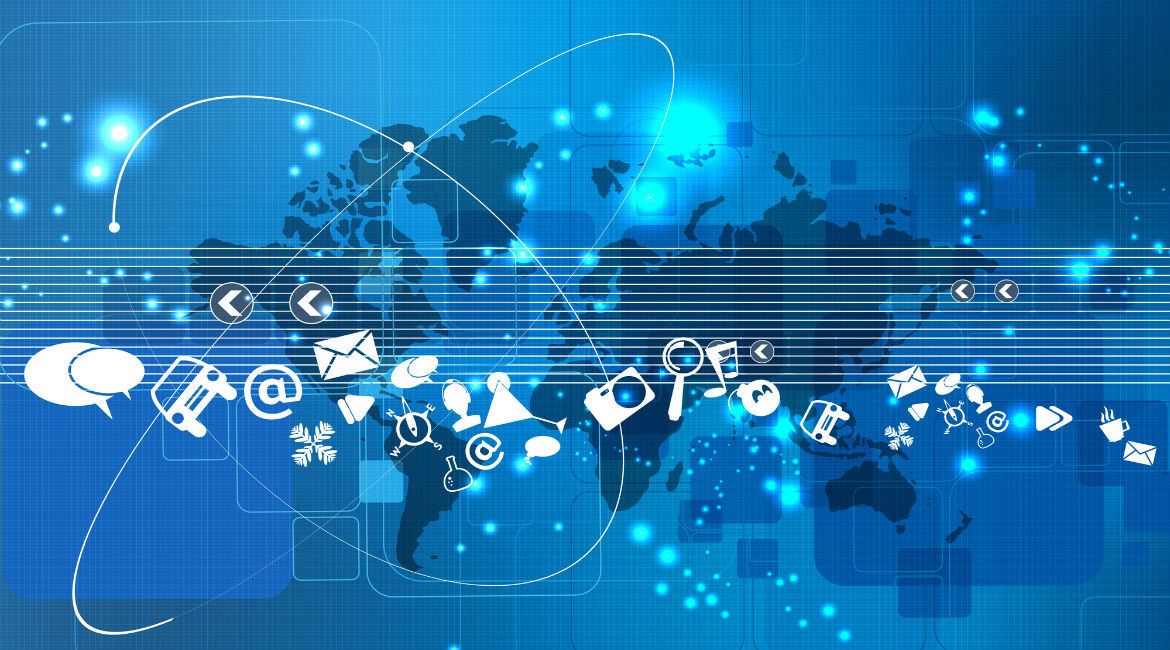 By James Osborne, Head of Sustainability at Lundquist and Head of the Lundquist CSR Online Awards &

In the dead of winter late last year, Swedish bank Nordea travelled to the snow-covered expanses of the Dakotas of the United States, thrusting its sustainability commitment into the centre of the searing debate about a $3.7 billion oil pipeline.

The proposed Dakota Access Pipeline had spurred months of protests by the Standing Rock Sioux Tribe, concerned the project would contaminate drinking water and damage sacred burial sites. The pipeline became an emblem in the 2016 US presidential election campaign, and President Donald Trump backed the project soon after taking office. In conducting a fact-finding mission about the impacts of the proposed link, Nordea didn’t limit itself to closed-door or private meetings. Sasja Beslik, its head of sustainable finance who travelled to the proposed site, took to Twitter to raise awareness about the issue. He posted a video interview with tribe leader David Archambault II. 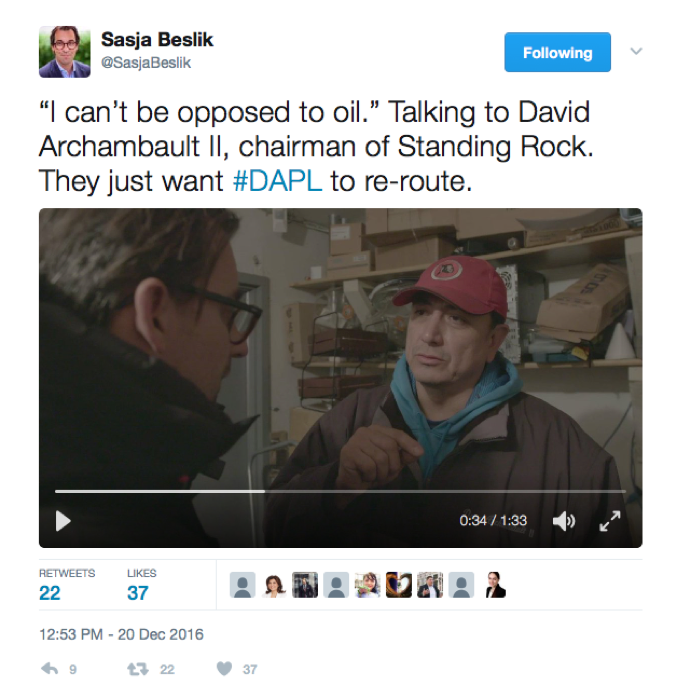 The public action by Nordea and Beslik, who counts almost 88,000 followers on Twitter, highlights the evolution in sustainability communications for the banking sector in Europe. Issues are global and the digital conversation animated, at times vociferous. The financial industry is frequently targeted by campaigners keen to get leverage and visibility by naming and shaming those financing controversial projects. Nordea itself said it was prompted into action on the Dakota Access Pipeline by customer concerns received via email and Facebook.

In this “hearts and minds” battle, we are seeing banks putting greater emphasis on social media and visual instruments such as video to express their side of the argument and explain what it means to be “sustainable” or “responsible” in practice. This is a change from the period following the financial crisis and the subsequent debate about the financial sector’s impact on the economy and wider society, when many banks transformed their sustainability or corporate-responsibility communications into detailed and “rational” presentations of their points of view, fully armed with the facts and figures. Websites and reports were the primary vehicles for this drive towards transparency; text and tables the primary instruments.

The Webranking by Comprend study, conducted in collaboration with Lundquist, is a useful barometer of the banking sector’s corporate communications and allows us to compare its approach with other industries. Webranking evaluates almost 1,000 corporate websites annually, measuring content against the expectations of critical audiences (investors, analysts, business journalists and jobseekers are surveyed each year). Think of it as a transparency stress test.

The latest results show that banks are gradually mending a historical deficit compared with other sectors. Leading banks, weighed down in the past by an inability to communicate clearly and transparently on themes such as financial performance and corporate governance and less-effective online employer branding and media relations, are upping their efforts.

We have seen the “pass rate” (considered as a score of at least 50 points out of 100) increase for the 49 European banks included in Webranking in 2016-17, reaching 31 percent in the latest edition and surpassing the 28-percent rate for Europe’s top 500 companies overall. The banking performance is up from 29 percent in the previous edition and 20 percent in 2014-15, buoyed by the top performers in the Nordic countries (best-in-class is Sweden’s SEB), Italy, Switzerland, Germany and the United Kingdom.

The sector still ranks as 13th out of 19 sectors with an average score of 40.8 out of 100 (compared with 42.7 points for the EU500 companies as a whole) as a result of poor performances by banks in Eastern Europe, Turkey and Spain. 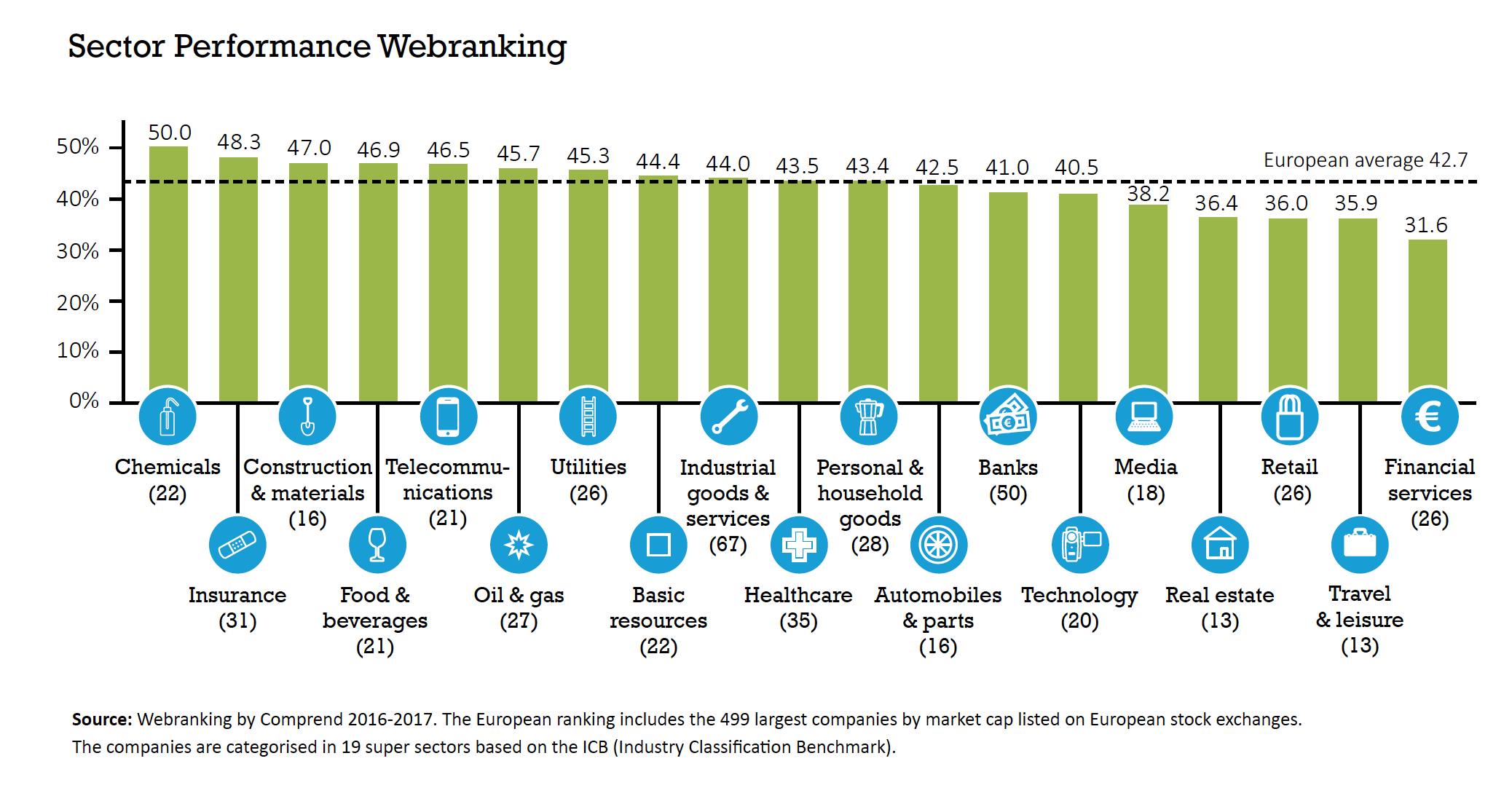 The banking sector ranks in 13th place out of 19 sectors analysed.

One bright spot for banks, however, is sustainability, posting a higher average score than for financial communications. More than 80 percent of the banks covered by Webranking have been reporting on their sustainability or corporate social responsibility (CSR) activities for more than three years now, illustrating a long-term commitment.

Indeed, the way banks are framing their sustainability efforts reflects how the sector is being called upon to account for its impacts. They want to reduce the sense that sustainability is only a nice-to-have that doesn’t shift day-to-day business.

Take UBS, for example, the fifth-highest scorer on sustainability in Webranking. The Swiss bank jettisoned the corporate responsibility label in a shift to its UBS and Society approach. This has four focus areas with the goal to “make sustainability the everyday standard”. Supporting the transition to a low-carbon economy through a comprehensive climate-change strategy is one of the bank’s key aims. 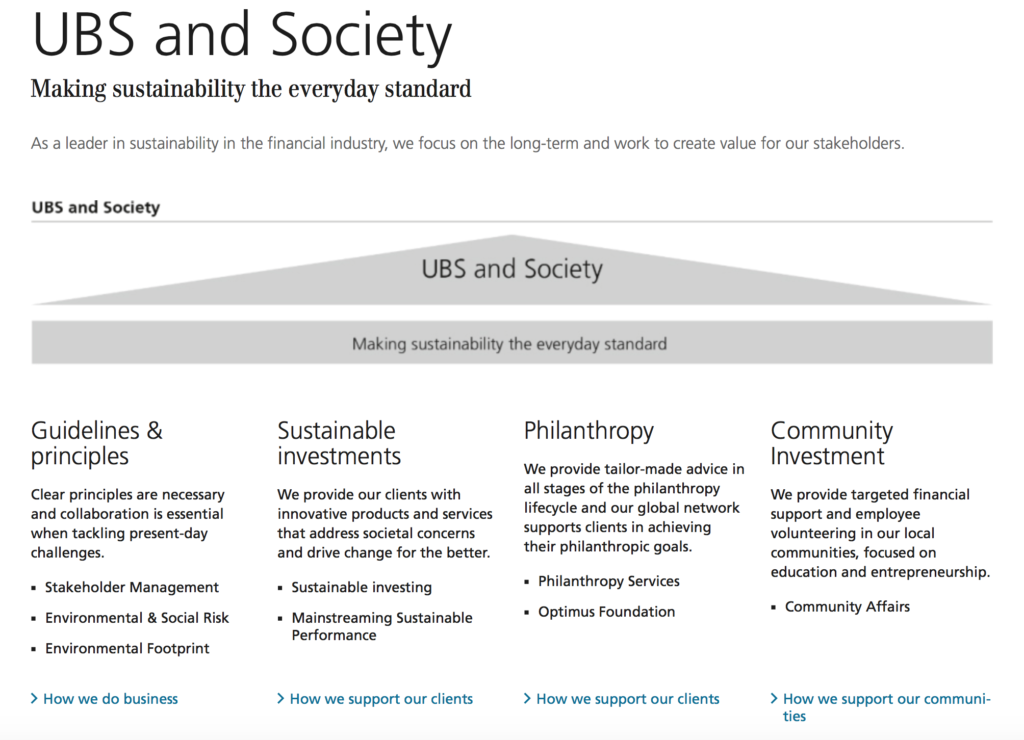 Other leading European banks are taking similar steps. Barclays’ “Citizenship Journey” focuses on a shared growth ambition “by seeking fair, ethical and open solutions to problems and by always striving to leave things better than we found them”. BNP Paribas calls itself “a committed and responsible bank” and outlines how its CSR approach will help tackle global challenges identified by the United Nations’ Sustainable Development Goals (SDGs).

ING and Deutsche Bank have responded by developing “Stances” or “Positions” on critical issues, including animal welfare, climate, defence, palm oil and more. Last but not least, Intesa Sanpaolo, our highest-scoring bank on sustainability in Webranking, refers to itself as a “responsible financial intermediary” with one of its key aims to help resolve the dramatic growth of social inequality and the human-rights agenda.

But the dynamics of today’s digital-communications context suggest that facts and figures, reports and press releases are not enough—let alone well-crafted slogans—unless they are aligned with action.

vThis brings us nicely back to Nordea and Sasja Beslik. Following the trip to the Dakotas, Nordea made headlines for its position on the pipeline. Initially the bank called for companies backing the infrastructure to re-route to avoid the Sioux reservation, a call that Greenpeace praised as an “important step”. The NGO (non-governmental organization) commented: “It is becoming increasingly clear that financial institutions view the Dakota Access Pipeline as a liability.” In February, after companies behind the project refused to engage, Nordea strengthened its stance, banning its fund managers from investing in the companies behind the pipeline. The following month, ING took a stance and sold its stake in the $2.5 billion loan financing the infrastructure, becoming the first bank to divest from the financing arrangement.

Nordea’s real-time communications, supported by Twitter and video, reflect the way banks are boosting investment in social media and digital for sustainability communications. This is evident from the Lundquist CSR Online Awards, a research project that offers a deep-dive into the way companies communicate sustainability online and in social media. The biennial study analyses corporate sustainability communications through measuring seven key aspects, ranging from content (Concrete, Exhaustive, User Friendly) to engagement and storytelling (Ongoing, Social, Integrated, Distinctive). In 2016 we used data-mining software to examine thousands of tweets and Facebook posts by companies to determine how often they broach sustainability and CSR issues, and how this correlates to engagement.

Our latest results suggest that sustainability information, in the form of reports, policies, data, targets, etc., are less of a priority for Europe’s top banks than a few years ago. Back in 2014, banks stood above other sectors in terms of transparency: in our “Exhaustive” pillar, which looks for detailed information on performance against targets, data on social investment and diversity as well as governance information, banks were ahead of other sectors by 7 percent on average. But they were penalised by an inability to go beyond simply posting vast amounts of static information online. Telling a coherent story about the impacts of the core business and engaging audiences about sustainability issues were not on the agenda.

Deutsche Bank has been a leader in this regard (with a longer-term commitment to digital that seems not to be a simple reaction to the woes of the past year). The German lender has used infographics to explain its position on complex issues and managed to generate considerable engagement on social issues through its social-media channels. BNP Paribas, Société Générale, ING and Lloyds Bank have also featured strongly in the research, especially for the way they talk about their own responsibility in a variety of corporate contexts. If sustainability is about the impact of a bank’s business, then communication needs to shift to reflect that.

But the sliding attention to transparency should sound alarm bells.

While it is encouraging to see leading European banks taking action on global, large-scale issues, there remains the problem that few communicate, or provide target data, on issues that have plagued their own industry in recent years, such as diversity and gender equality in the workplace.

On the very same day that Donald Trump signed his presidential memoranda backing the Dakota Access and Keystone XL pipelines, over in London, Megan Butler, supervision head of the Financial Conduct Authority, spoke out about the “white male” culture permeating the industry, saying that competition for talent should not be focused on just half the population (or one race). Despite this, only 26 percent of banks in our Webranking study provide information in numbers about diversity, a low number considering the industry being consistently called out on this issue. A lowly 15 percent provide target figures in this area, and only 12 percent report on their ability to achieve social targets.

If banks want to take on the role-model mantle of tackling the world’s largest global issues, they need also to present what they are doing to tackle their own industry issues. This is not only a preventative measure but also makes business sense, and enhances credibility among stakeholders. By engaging in action-oriented and credible corporate communications, as the leading banks do on the big issues of today, the industry can set a prime example for other sectors to follow suit. As the UN SDGs call for collective action, this would be a win-win situation for all.