Top Posts
Challenges Remain, But There Are Opportunities to Be Had in...
Interview with Mr. Olukayode Pitan, Chief Executive Officer and Managing...
Commodities Outlook for 2023
The Value of Cash in a Time of Crisis: How...
The US-Africa Leaders Summit: Fostering a Closer Relationship with the...
Three Key Sectors in Which to Invest in 2023
Home Banking Size and Performance of European Banks: Can small banks be top performers?
Banking 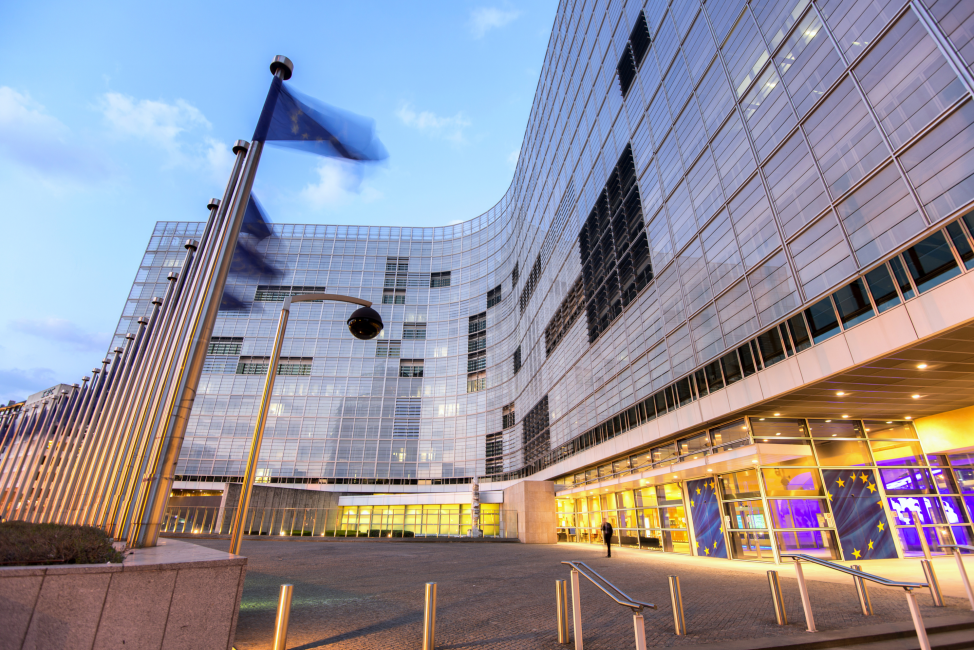 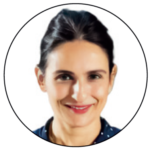 After a remarkable consolidation process over the last decade in Europe, there are now about 2,400 small and medium-sized banks, also referred to as less significant institutions (LSIs), directly supervised by national authorities. LSIs, which account for nearly 20 percent of the European banking sector by assets, are a key source of funding for small and medium-sized enterprises (SMEs). According to the European Commission (EC), SMEs are the backbone of Europe’s economy, representing 99 percent of all businesses in the European Union (EU), employing around 100 million people and accounting for more than half of the area’s gross domestic product (GDP). In certain highly fragmented countries, the relevance of LSIs is even more accentuated. In Germany and Austria, for instance, LSIs account for nearly 40 percent of the countries’ banking sectors and 80 percent of national GDPs.

These numbers are striking for two (almost opposite) reasons. On the one hand, they shed light on the economic relevance of smaller banks; on the other, they raise questions about their vulnerability. A trade-off seems to arise: While a diversity of small and medium-sized banks appears desirable, in the event of a failure, all these banks taken together could pose a risk to overall financial stability.

This issue goes hand in hand with the scant profitability of European banks, a long-lasting challenge, according to European banking authorities. Since the global financial crisis (GFC), the degrees of European and US bank profitability have been on diverging paths, with the former’s banks showing persistently low profits, particularly in peripheral countries. As such, banking authorities have pointed to prolonged weak bank profitability as a key risk to Europe’s financial stability because low profits reduce banks’ abilities to generate capital internally through retained earnings and create incentives for excessive risk-taking. The policy debate on bank profitability has identified overcapacity and excessive fragmentation as well as heightened competition from large and IT (information technology)-based nonbanks (e.g., fintech [financial technology] companies) as major threats to sustainable profitability in the European banking industry. This has raised questions about the overall sustainability of the traditional commercial-bank business model, especially for small banks. Overbanking and overcapacity issues, in particular, have stimulated an intensive consolidation process that has reduced the number of LSIs by more than 600 entities since December 2014.

In fact, the question of the relevance of bank size in influencing bank performance is not new in the academic banking literature. Numerous studies have investigated the main macro- and micro-level drivers of bank performance (Fronk, 2017).1 Among the bank-specific factors, size has received much attention for influencing operational efficiency and, therefore, bank performance. While many studies have concluded that operational efficiency is important to enhance bank performance, the empirical evidence on the role played by size is inconclusive (Kok et al., 2015).2 Size benefits seem to be associated with the possibility for larger banks to exploit economies of scale and scope, which, in turn, may lead to higher profits. Other studies, however, point to the non-linearity of the size-profitability nexus (e.g., Petropoulou et al., 20203; Bonaccorsi di Patti and Ciocchetta, 20204) as well as to the threats to financial stability posed by too-big-to-fail institutions.

Against this background, we have contributed to the institutional and academic debate on bank size and business-model sustainability by investigating whether and to what extent better performance is associated with specific size categories.5 We have addressed the following questions: Do large commercial banks consistently perform better than small ones? Does bank size affect the probability of achieving high performance?

To address these questions, we focused on a large sample of European banks selected by their asset sizes and prevalent business models (i.e., taking customer deposits and making loans). The final sample comprises banks that are homogenous by type of activity (commercial banking being their core business) but heterogeneous in terms of size. To capture the effects of the economic cycle, the analysis was carried out over 2000-19, a relatively long time horizon comprising two back-to-back crises—the global financial crisis and the European sovereign debt crisis. To investigate the role of size in explaining bank performance, we classified the sample banks into four size categories: minor (with total assets between $500 million and $2 billion); small ($2-10 billion); medium ($10-30 billion); and large (more than $30 billion). We measured bank performance in terms of profitability and its main components (operating cost efficiency, loan-portfolio quality, capitalization and revenue diversification).

The analysis is articulated in two parts. We first provide some stylized facts on European banks’ profitability by considering the evolution through the cycles of ROA (return on assets) and ROE (return on equity) as well as their main components. We identify “top performer” banks in terms of ROA and ROE as those in the top 50 percent of the distribution (above the sample median). The definition of “top performer” banks is crucial for the purpose of our paper, as we are interested in understanding if persistently poor (i.e., below the median value) profitability is associated with a given size category.

Figure 1 shows the patterns of ROA and ROE of banks in our sample by dimensional group (top graph); in the bottom graph, we split each subsample into “top” and “bottom” performers. We found strong differences in the banks’ performances across the four dimensional groups only in the pre-crisis period, when the most profitable banks were medium-sized. Since 2010, the gaps between the four groups have shrunk considerably. This suggests that medium-large banks have displayed more volatile profitability performance than minor-small banks. Interestingly, within the top-performer banks in the post-crisis years (from 2013 onwards), there were no significant divergences in the profitability levels across the dimensional groups. Within the bottom-performer banks and during the global financial crisis, only the medium and large banks showed poor performance in terms of profitability (corresponding to negative values of ROA and ROE). Finally, within each size group, the gap between top and bottom performers was stable (we observed an increase for only large banks). 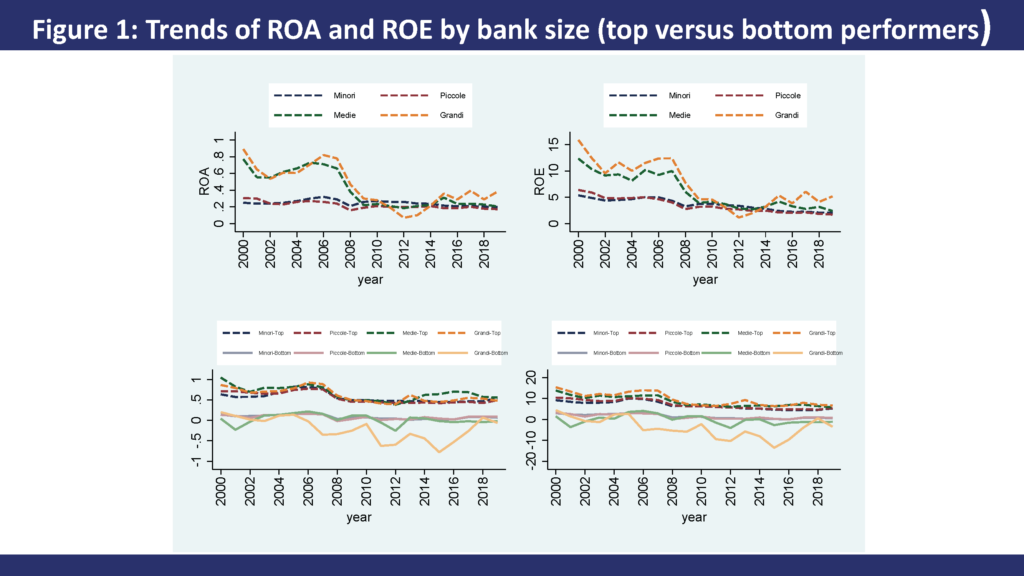 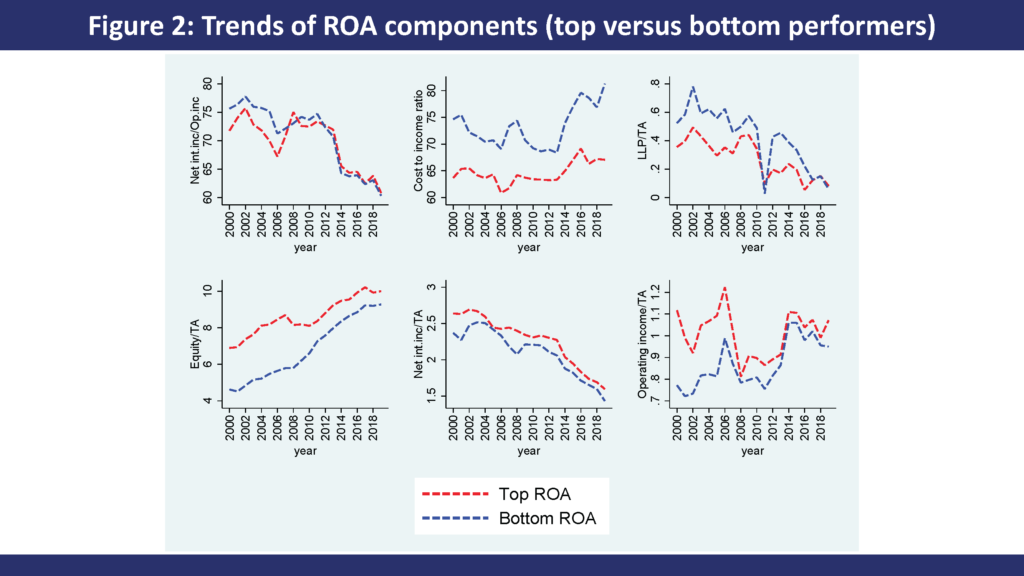 In the second part of our analysis, we took another step forward and assessed through an econometric analysis which bank-specific characteristics were more likely to explain the probability of a bank becoming a top performer. Does size affect the bank’s probability of being a top performer in a given year? Are banks belonging to larger size categories more likely to outperform smaller banks (once those other relevant bank characteristics have been accounted for)? We have found that bank size is broadly neutral and, for most of the specifications, not statistically significant. Loan-portfolio quality and operating efficiency are the most relevant characteristics explaining the performance gap, independent of bank size. The results are stable across specifications and robust against several checks.

All in all, our results contribute to the institutional and academic debate on bank size, business-model sustainability and performance. Our findings show that the European commercial banks that have outperformed their competitors over the last few years have been heterogeneous in size. For top performers, size was not a decisive factor alone, but the key was controlling credit risk and being more cost-efficient.

ABOUT THE AUTHOR
Brunella Bruno is a tenured Researcher and a Baffi Carefin Research Fellow, Finance Department, Bocconi University. She holds the National Scientific Qualification as a Full Professor and a PhD in Financial Markets and Institutions from the University of Siena.
Back To Top
BankingBocconi UniversityBrunella BrunoEuropean Banking SectorEuropean BanksEuropean Commission (EC)European Union (EU)
0 comment 0 FacebookTwitterPinterestEmail
previous post