Top Posts
Challenges Remain, But There Are Opportunities to Be Had in...
Interview with Mr. Olukayode Pitan, Chief Executive Officer and Managing...
Commodities Outlook for 2023
The Value of Cash in a Time of Crisis: How...
The US-Africa Leaders Summit: Fostering a Closer Relationship with the...
Three Key Sectors in Which to Invest in 2023
Home Banking Sri Lankan Banking Sector Under Pressure Amid Nationwide Crisis
Banking 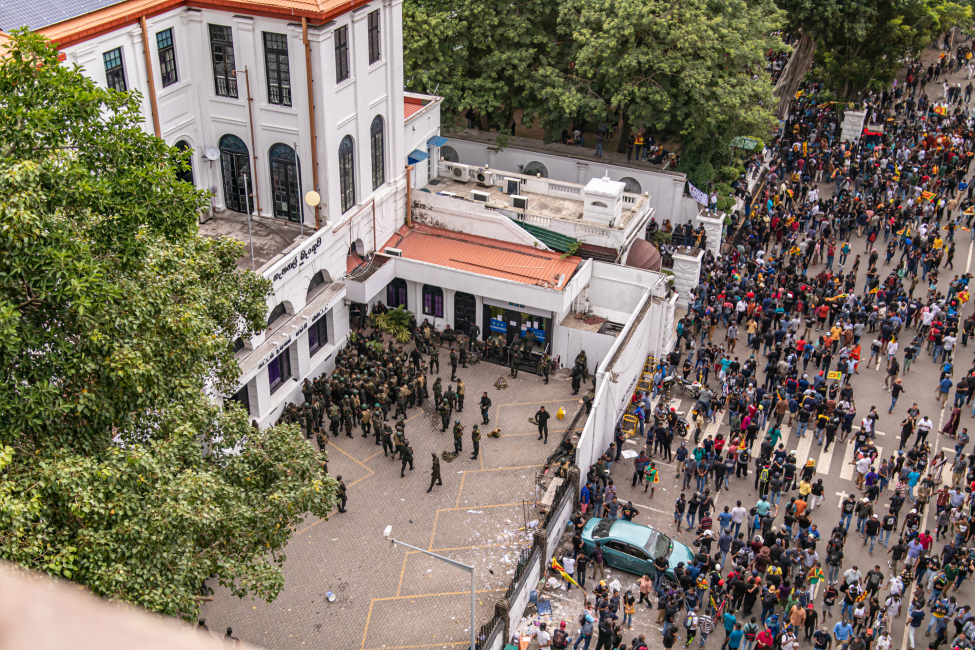 It has been perhaps the worst year ever for Sri Lanka’s economy, with the South Asian island nation having missed crucial debt-repayment deadlines, thus being the first country in the Asia-Pacific to default in the 21st century. Mass nationwide demonstrations against the government have been ongoing since March as sharply rising inflation and severe shortages of food, fuel, medicines and other necessities culminated in protesters storming government buildings in the capital city of Colombo. The protests eventually led to President Gotabaya Rajapaksa stepping down from his role on July 15 and fleeing the country.

The impacts of the Sri Lankan political and economic tailspin on the banking sector during the crisis have been profound, with dwindling currency reserves weighing heavily on lenders. But truth be told, the sector was already on a steep decline prior to the default, as the country’s sovereign downgrade to CCC by Fitch Ratings in 2020 led to a major drying up of overseas funding channels for Sri Lankan lenders. Indeed, official data shows that Sri Lankan banks have been forced to cut their overseas borrowing activities over the last year dramatically.

“The operating environment for banks in Sri Lanka remains challenging, and we expect banks’ financial profiles to come under stress,” Fitch observed in late November 2021. “The sector regulatory non-performing loan (NPL) ratio rose to 4.7 percent by end-2019, prior to the economic disruptions from the pandemic, and reached 5.4 percent by end-1H20.” The ratings agency also acknowledged at the time that asset-quality stress was deteriorating, and Sri Lankan banks could also face “increased challenges in the access to—and pricing of—foreign-currency funding stemming from the deteriorating sovereign credit profile”.

With Sri Lanka having defaulted this year, then, the situation for its banking sector remains perilous. In late May, S&P Global Ratings warned there was a distinct likelihood that some lenders might default on their foreign-currency obligations to overseas creditors, with reports suggesting they faced challenges in honouring their currency-swap obligations with international counterparties as well as letters of credit (LoCs)to oil companies. What’s more, the dearth of foreign-exchange reserves that banks now hold has become so acute that supporting the necessary import purchases is severely straining their cash flows; indeed, without sufficient inflows, banks remain almost entirely hamstrung in their endeavours to stabilize the economy.

With Sri Lanka’s economy still subdued—and political uncertainty prevailing—banks continue to be presented with clear credit risks amid a fragile operating environment. According to S&P, the Sri Lankan banking system’s nonperforming loans (NPLs) were estimated at 4.5 percent of total loans at the end of last year. This figure is almost certain to have risen since then. “We believe the NPL ratio figure understates the true asset quality of the banking system. The lower ratio is mainly due to the moratorium and other concessions granted on repayment of loans due to the Covid-19 pandemic”, S&P added.

Banks also play a crucial role in Sri Lanka by absorbing remittance payments from Sri Lankan expatriates working abroad. According to the central bank, such remittances have been a “key pillar of Sri Lanka’s foreign currency earnings”, providing a substantial cushion against the trade deficit and thereby enhancing the external-sector resilience of the country. “Being a major source of foreign exchange earnings, workers’ remittances have covered around 80 per cent of the annual trade deficit, on average, over the past two decades.”

But remittances to Sri Lankan banks have declined significantly since the pandemic, and even more so after the central bank pegged the rupee at 200 per dollar in October 2021, which prompted many from the Sri Lankan diaspora to switch to informal wire-transfer services to obtain better exchange rates. From January to May of this year, therefore, the central bank recorded just $1.3 billion in total being received in foreign remittances, less than half the $2.8 billion received during the same five-month period in 2021. Banks have thus experienced drastically reduced inflows of remittances this year, despite the government reversing course and unpegging the rupee and allowing it to depreciate, which, in turn, has further constrained their capacities to lend.

The government has since introduced regulations that punish those that send foreign exchange via unofficial systems and incentivise those who use the formal banking system. And at the end of July, it was revealed that a mandate had been issued to commercial banks to sell dollars to the central bank. “To ensure adequate foreign exchange liquidity in the banking system, the CBSL [Central Bank of Sri Lanka] had to impose surrender requirements on export earnings,” the monetary authority said, as reported by Sri Lankan financial news service EconomyNext. “Further, measures were taken by the Government and the CBSL to discourage foreign exchange outflows, such as imposing restrictions on certain imports and payment terms and introducing margin requirements, while encouraging foreign inflows through the banking system, rather than those being channelled through the grey market.”

Nonetheless, the Central Bank of Sri Lanka is making solid efforts to encourage banks to boost their lending to sustain the economy in the interim. For instance, it has pressured financial institutions to establish post-COVID-19 revival units to assist those borrowers demonstrating under-performing and non-performing characteristics. “Considering the current macroeconomic challenges…CBSL has requested the licensed banks to provide appropriate concessions, for a period of six months, to borrowers whose income or businesses have been adversely affected due to the current macroeconomic and/or COVID-19 pandemic while preventing any undue stress on the banking sector stability,” the central bank stated on July 20. “These concessions are provided on a case-by-case basis depending on the future repayment capacity of the individuals and the viability of businesses/ projects.”

There is also evidence that banks improved their positions in July, with central bank data showing that lenders reduced their negative net open positions (NOP) early in the month. “Given the situation we have given some flexibility for banks on prudential basis for them to manage without imposing strict NOP positions,” Central Bank Governor Nandalal Weerasinghe confirmed after July’s monetary-policy meeting. “They can go negative or positive depending on the liquidity availability. They are given the flexibility in this kind of situation.”

It should also be emphasized that despite the formation of a new government under Ranil Wickremesinghe, Sri Lanka remains in a precarious situation, not least as the new president was previously the prime minister during the Rajapaksa presidency and thus has close ties to the ousted former administration. And given that Parliament continues to house many politicians from the United People’s Freedom Alliance, which remains closely affiliated with the Rajapaksa family, further demonstrations are not out of the question, especially if ordinary Sri Lankans do not experience any significant improvement in their living standards.

The gloomy global economic outlook for this year at least is also certain to keep Sri Lanka’s economy struggling until 2023 at the earliest. “The economic impact of the pandemic has declined across most of Asia, but we’re far from a full and sustainable recovery,” the Asian Development Bank’s (ADB’s) chief economist, Albert Park, recently observed. “On top of the slowdown in China, fallout from the war in Ukraine has added to inflationary pressure that’s causing central banks around the world to raise interest rates, acting as a brake on growth. It’s crucial to address all these global uncertainties, which continue to pose risks to the region’s recovery.”

As such, one can reasonably assume that Sri Lanka’s banking sector will remain “under the cosh” for the remainder of the year. Indeed, S&P recently suggested that challenging conditions could persist for financial institutions until Sri Lanka’s sovereign-debt situation stabilises, meaning that banks could face distinctly weak operating conditions for at least the next 12 months as they continue to resolve their obligations with foreign counterparties. But should Sri Lanka default on future debt obligations, Fitch recently noted, it could “erode local banks’ capital positions, possibly leading to government capital injections into the banking sector that would erode the net benefits” of any debt-restructuring arrangement it had agreed with its outstanding creditors.

Can the banking sector recover and generate a broader resurgence for Sri Lanka’s economy? “It is going to be a difficult task, especially given that dwindling foreign exchange reserves and external borrowing lines mean the sector is dependent on deposits,” according to Jonathan Alles, managing director and chief executive officer of Sri Lankan private bank Hatton National Bank (HNB), who spoke with EconomyNext on July 18. “At present, inflows into foreign currency deposits are also weak, which in turn constricts foreign currency lending. We understand that foreign currency borrowers are struggling, but banks may likely have to encourage them to start repaying. In the absence of deposits, the loan repayments can generate some forex liquidity into the banking system to support export finance at least, if not more.”