Top Posts
Challenges Remain, But There Are Opportunities to Be Had in...
Interview with Mr. Olukayode Pitan, Chief Executive Officer and Managing...
Commodities Outlook for 2023
The Value of Cash in a Time of Crisis: How...
The US-Africa Leaders Summit: Fostering a Closer Relationship with the...
Three Key Sectors in Which to Invest in 2023
Home Banking The State of Omnichannel Banking in North America: A Researcher’s Perspective
Banking

The State of Omnichannel Banking in North America: A Researcher’s Perspective 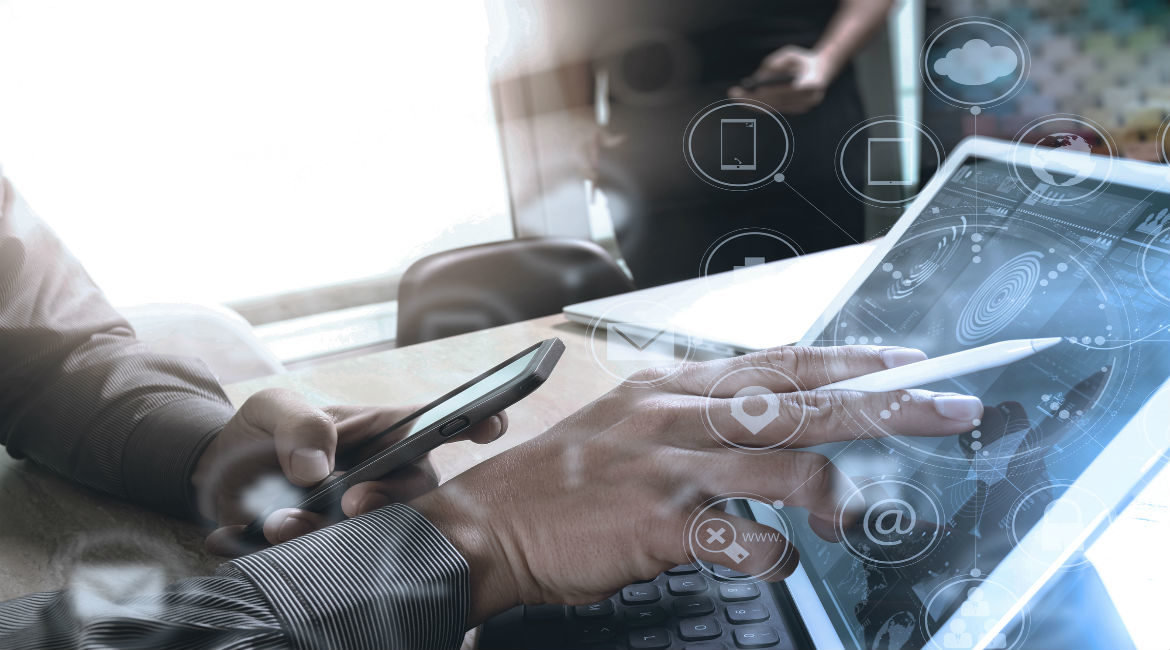 Hardly a day goes by that we don’t read about the imperative of omnichannel retail delivery. Banks are joined by other retail segments in grappling with the unprecedented changes in consumer behavior and preferences. The effects are now being felt in commercial banking. Worse, consumer expectations are rising just as fast, propelled by the extraordinary user experiences and capabilities offered by the likes of Amazon, Uber and Venmo.

As part of our retail and business banking practice, Celent keeps tabs on the evolution of retail-delivery channel platforms through biennial surveys among North American financial institutions. Our last survey was fielded in December 2016. In this article, we’ll address three questions, while offering some recommendations to banks aspiring for excellence in omnichannel retail delivery:

What is omnichannel delivery?

Said simply, consumers expect retailers to reflect consistent and increasingly personalized brand experiences no matter how or when they choose to engage—and they expect retailers to know them and their interaction histories. This is the essence of omnichannel retail delivery. Like most things in life, it is far easier said than done.

In part, this is because retail-banking delivery channels arrived and evolved independently. The first “alternative channel” to the branch arrived in the form of call centers in the 1960s—followed by the ATM in the early 1970s, online banking in the 1990s and mobile banking more recently (Figure 1). Most banks run each channel as a separate “technology stack”, a once-reasonable outcome most of us in the industry took for granted. But these channel silos and the organizations that grew up around them represent a sizeable barrier to omnichannel delivery. 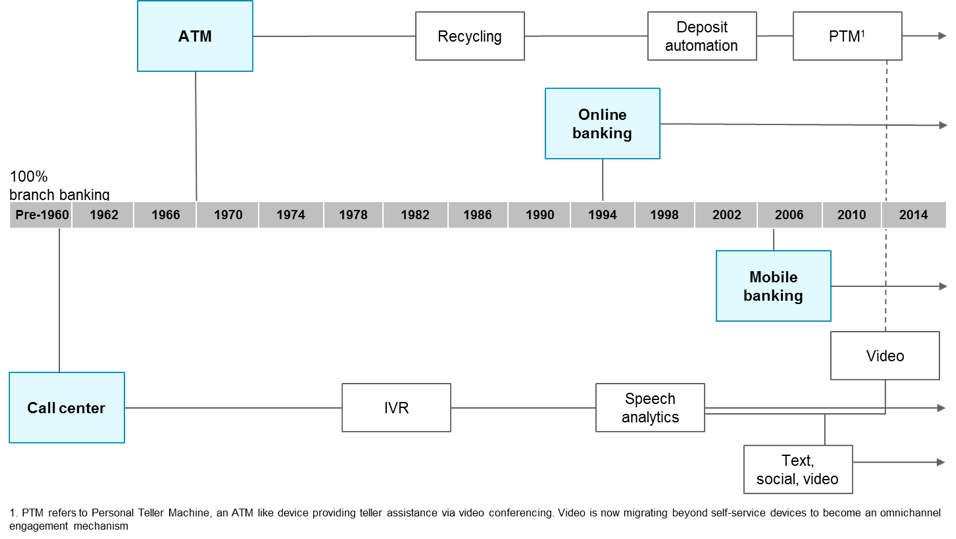 How important is omnichannel?

The Internet changed things, and mobile changed them again. It has never been easier to get information or advice—anytime, anywhere. And it has never been easier to buy things—including financial-services products. From Quicken’s Rocket Mortgage to Eastern Bank’s Coffee-Break Loan for small businesses, consumers and businesses are increasingly offered alternatives to what your bank is providing, and they can have them without entering a branch in most markets. Customer acquisition at leading banks and fintechs has become impressively fast and easy. Once acquired, customers are greeted with a bevy of personalized and convenient ways to interact—on their terms.  Taking a page from Uber’s playbook, a growing number of competitors are squarely focused on providing an excellent omnichannel customer experience. Omnichannel is no longer optional.

Most North American banks agree. Celent’s December 2016 survey began by looking into banks’ key priorities. “Improving customer relationships” was ranked as their firm’s #1 strategic priority by 70 percent of surveyed institutions. When asked about important technology initiatives to support these priorities, omnichannel delivery ranked second only to mobile-banking channel development—most every bank’s #1 technology priority (Figure 2). On a five-point importance scale (5=most important), omnichannel delivery scored 4.1—and even higher among large banks. 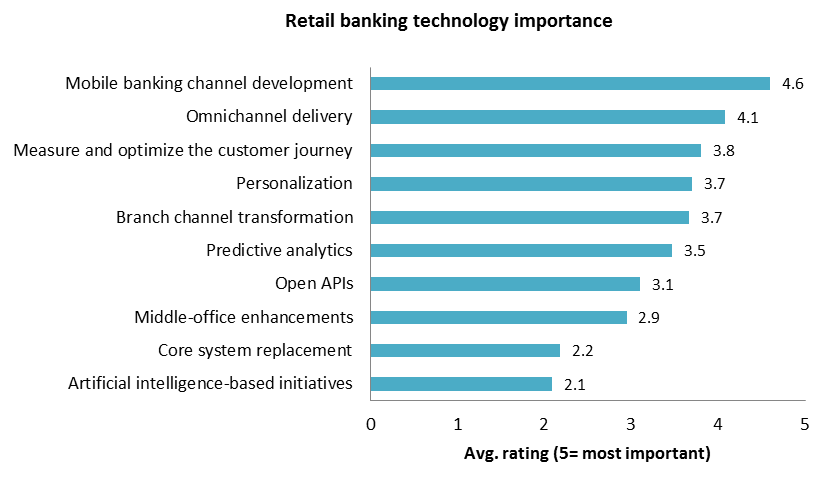 Source: Celent survey of North American financial institutions, December 2016, n=112.
Q: How important are each of the following technologies in delivering your top priorities in the previous question?

Banks realize that omnichannel is important. Other “hot topics” such as predictive analytics, open APIs (application program interfaces) and artificial intelligence are increasingly important also, but less so—at least until banks get closer to their omnichannel destination.

What is the state of omnichannel in North America?

Omnichannel readiness may be theoretically simpler and easier for smaller organizations running relatively modern legacy systems. While this describes many community banks and credit unions, those same institutions are also heavily reliant on their core-banking system vendors, most of which do not yet offer a turnkey path to omnichannel delivery for their clients. Large organizations have a comparatively more difficult path ahead given the complexity of their systems, processes and organizations, but have begun working on the objective well ahead of smaller institutions. As a result, large banks have a commanding lead in omnichannel readiness, based on their own self-assessments (Figure 3).

Figure 3: Large banks are much further down their omnichannel journey. 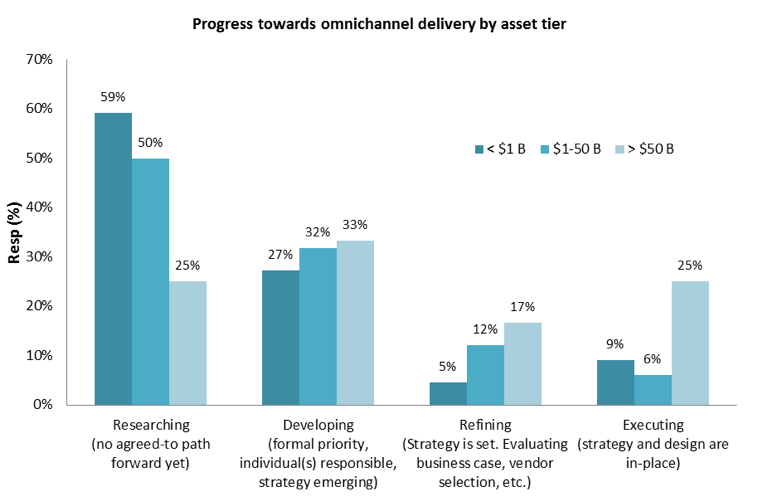 Source: Celent survey of North American financial institutions, October 2016, n=112.
Q: Which option best describes where your institution is in its journey towards omnichannel delivery?

Celent offers several observations from our research on banks’ journeys towards omnichannel delivery.

Omnichannel delivery clearly remains aspirational at most institutions. With that in mind, Celent offers two recommendations: one for institutions that have not yet begun the omnichannel journey and another for those well down the path.

To those not yet on the omnichannel journey:

Half of mid-size and over half of small institutions haven’t even packed for the trip. While conceding its importance, these institutions are still “researching” omnichannel delivery with no agreed-upon path forward. Celent does not advocate haste, but inaction is indefensible in today’s high rate-of-change environment.

Equally, half of surveyed institutions (both large and small) do not have individuals or teams responsible for omnichannel. These institutions need a travel agent! Large institutions in particular have multiple internal constituencies with sometimes conflicting agendas. Packing for the trip first requires building consensus across these constituencies. Committees are not fit for this task. The buck needs to stop with one person. The individual responsible also needs the authority and resources to get the job done.

To those on the journey:

Key to navigating any long journey is having a firm fix both on one’s destination as well as the complexities of the route along the way. Celent’s research suggests too many institutions are fixated on the road directly in front of them (e.g., channel transaction activity)—or worse, the institutions directly ahead of them (e.g., mobile-banking platform benchmarking). The good news is that those institutions are not running off the road. The bad news is that they very well may be headed in the wrong direction. If this is so, harm is not averted; it is merely postponed.

Not long ago, it would have been reasonable to question the merits of omnichannel delivery. Those days are gone. While omnichannel may be an over-used and ill-defined buzzword, two realities make its pursuit no longer optional:

Ensuring Technology and Regulations are Powerful Allies with RegTech