Top Posts
Is It Time to Explore an Alternative to Fractional-Reserve Banking?
Can AgTech Prove Instrumental in Helping to Feed the World’s...
Can the Indo-Pacific Economic Framework Expand US Economic Influence in...
Banks Remain Uniquely Vulnerable to Sophisticated Cyber-Attacks
Western Banks Willing to Accept the Short-Term Pain of Russian...
Why the US Is Ramping Up Its Presence in Somalia...
Home Banking Is the Traditional Bank Branch on the Way Out?
Banking

Is the Traditional Bank Branch on the Way Out? 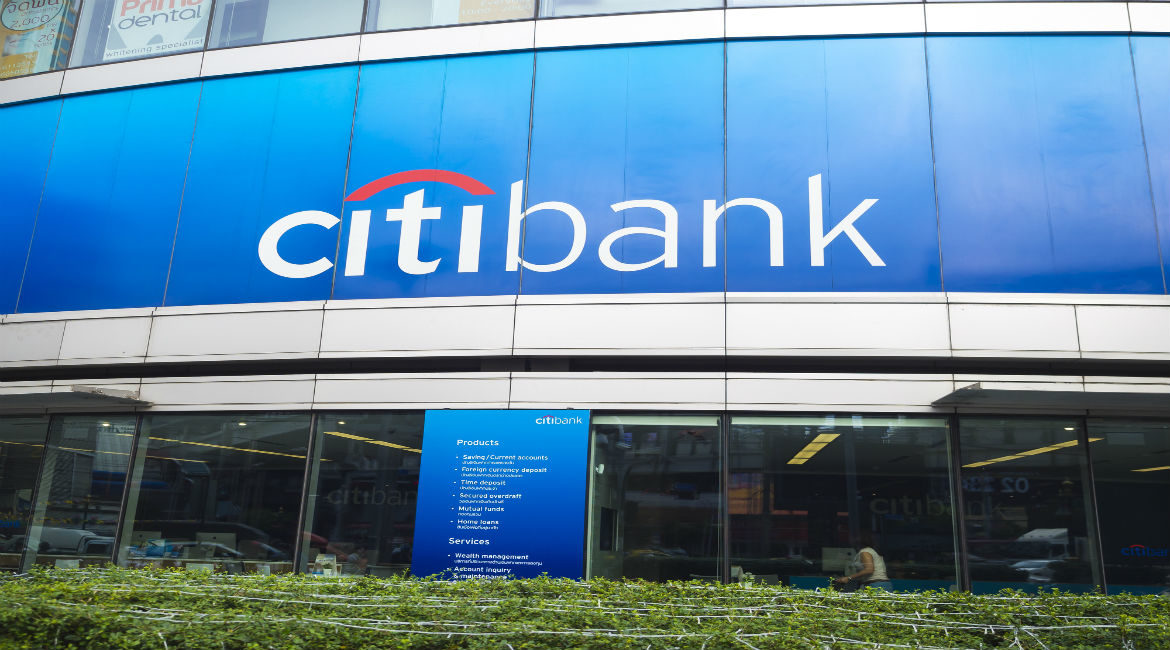 In early March, Ulster Bank announced that from October onwards, it will be closing nine of its 64 branches that are currently located in Northern Ireland. The reason for the closures is straightforward—more customers are simply opting to use digital banking solutions at the expense of visiting their local bank branches. The closures are just the latest example of banks across the world being forced to close branch offices, and now many fear that the traditional bank branch could soon become obsolete.

The trend is even being described by some as the banking sector’s “Uber moment”; those include former CEO of Barclays, Antony Jenkins, who in late 2015 compared the way technology is expected to transform financial services to the ride-hailing company (Uber) that has profoundly disrupted the taxi industry. Indeed, Jenkins expects that the current financial technology (fintech) revolution will force the banking industry to cut both branch numbers and employment levels by 20 to 50 percent over the next decade.

A report from Citigroup released in March 2016 strongly echoes Jenkins’ views, describing commercial banks in the United States and Europe as being “at a tipping point in terms of branch distribution”. The report provides projections of the numbers of commercial bank branches across major regions of the world over the next 10 years: 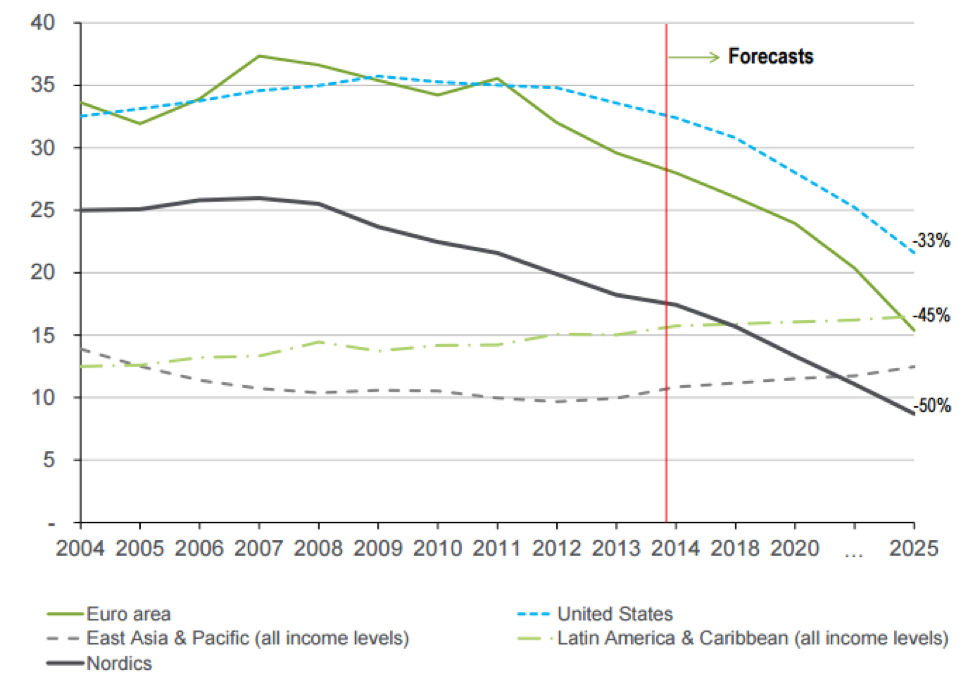 Since 2009, 6 percent of US bank branches have closed, while in 2016 alone, the total number of closures stood at 1,614, which represented a 1.7-percent decline from the overall number of branches that were open at the end of 2015. The long-term trend is even more pronounced—commercial bank branches have declined in number by 26 percent between 2005 and 2015, and by a staggering 61 percent since the US saw an all-time peak back in 1994. According to forecasts by global outsourcing firm Intelenet Global Services, moreover, a further 20 percent of bank branches in the US will permanently close their doors by 2020.

The choice to close down branches is also being supported by the fact that branches themselves are typically rather costly to open and keep in operation. A report by Forbes last year found that setting up a new branch in the US costs between $2 million and $4 million, while running the branch will set a bank back anywhere from $200,000 to $400,000 per year. It also takes, on average, a full 10 years before the branch office achieves $1 million per year in profit. This relatively slow growth trajectory does little to support the case for keeping branches open in the face of mounting pressure from the fintech sector.

The online revolution is now making banks reassess how they approach and interact with their customers. Indeed, Intelenet CEO Bhupender Singh notes that the past few years have seen “the explosion of online banking services, many of which are completed without any human interaction”. A report by investment bank KBW, meanwhile, notes that the decline in branches is being outstripped by the rate of transformation in banking technology, especially thanks to the widespread adoption of the smartphone and its mobile-payments functionality; so it is perhaps of little surprise that the traditional bank branch is undergoing such a decline. Consumer preferences within the finance industry are rapidly changing, while the rise of fintech and the digitisation of banking are now allowing consumers and businesses alike to manage their financial affairs in a wholly new manner. Customers, especially among the Millennial generation, also seek to conduct personal financial management whilst on the go, whether that involves sending a simple payment to a friend through a smartphone or applying for a mortgage using a video link.

The importance given to branches by customers, therefore, is sharply falling. In the 2013 version of Accenture’s annual “North America Consumer Digital Banking Survey”, it was found that 48 percent of customers would switch banks upon the closure of their local branch. By 2015’s survey, that proportion had contracted to just 19 percent, indicating just how small an influence the bank branch now holds in a customer’s financial life. The United Kingdom is experiencing a similar transformation. Over the last five years, the five biggest banks have closed approximately 1,700 branches, while 2016 alone saw the country close more than 600 branches. According to recent data from The Guardian, moreover, 2015 was the first year in which cash transactions were less preferred than mobile, contactless payments. Indeed, it is now predicted that by 2025, up to 75 percent of all transactions will be cashless. This clearly has profound implications for the existence of bank branches during the coming years.

That’s not to say that the banks are taking such projections lying down. On the contrary, they are now beginning to rethink the nature and core purpose of physical bank branches. In early 2017, for instance, Bank of America began testing the potential of the “automated” branch that, in terms of the extent of services offered, would fall somewhere between a simple ATM machine and a fully operating bank branch. The move, which Bank of America has undertaken as part of a broader overhaul of its retail-banking network, is clear evidence that it acknowledges the fundamental change in the relationship taking place between customers and their branches.

The same Citigroup report also concludes that as customers continue to shift their banking habits towards the online world, banks would do well to adopt an “omni-channel strategy”, one that is “built around a competitive digital offering, a reduced and modernized branch network and, lastly, a targeted channel strategy for different segments of customers”. KBW, meanwhile, suggests that the solution for retail banks over the next 10 years lies in “reducing the number of branches and reinvesting some of that savings in brand enhancement”.

Furthermore, when it comes to making big financial decisions, customers are likely to continue demanding face-to-face meetings with branch managers. As such, the solution for conserving the bank branch seems likely to involve a combination of utilising the latest technologies in order to serve the needs of an increasingly tech-savvy customer base (and in the process, fundamentally changing the branch’s inherent purpose of existence), as well as supporting existing client segments that continue to depend on traditional branch services, such as homeowners seeking mortgage advice. Indeed, Intelenet has already seen the adoption of such a model yielding favourable results. One of the company’s projects with one of the UK’s top six mortgage providers resulted in “a reduction in mortgage approval time from 11 days to 48 hours”, according to CEO Singh, which in turn allowed his client to “make the back-office savings which can be redirected to the front end of customer service”.

It would appear, therefore, that the ultimate survival of bank branches will depend on how quickly they can adapt to the changing environment of retail banking, and there appears to be little reason to suggest that such a transformation can’t be accomplished in time. As banks themselves have evolved to keep pace with the new breed of fintech start-ups, so, too, will the physical bank branch; and that means that sounding the death knell for a still-vital component of financial institutions seems premature at this stage.

The connected era – are retail banks doing enough to keep us coming back for more?