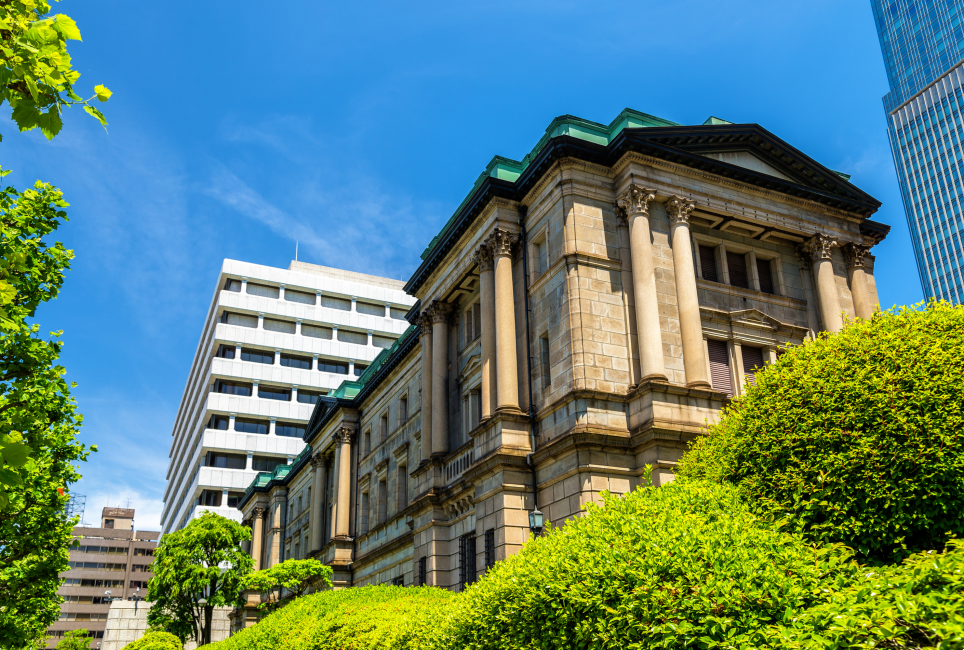 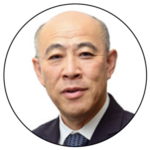 By Takeo Hoshi, Professor of Economics, University of Tokyo

High inflation is back for the first time in three decades in many advanced economies. Supply constraints and overheated economies have replaced demand shortages and potential deflation as the most important concerns for central banks. Japan, however, appears to be different. Compared with other advanced countries, the inflation rate is still low, and salaries in many industries continue to stagnate despite the reported labor shortages.

One reason Japan appears different is probably the stubbornly low inflation expectations formed over the last three decades, during which Japan was often on the verge of deflation. The Bank of Japan (BOJ) is at least partially responsible for these sticky low-inflation expectations. The Japanese economy started experiencing deflationary pressures in the 1990s, and the BOJ implemented various new monetary-policy tools, including zero or negative interest rates, forward guidance, quantitative easing and yield-curve control, which later became known as unconventional monetary policies. Before Mr. Haruhiko Kuroda became the BOJ’s governor in 2013, however, the BOJ ended its unconventional monetary-policy measures as soon as the economy showed any indication of recovery and often openly expressed doubts about the effectiveness of the unconventional policies. After Governor Kuroda signaled a change in the monetary-policy regime by embarking on quantitative and qualitative easing in 2013, inflation expectations rose. But expectations retreated as the actual inflation rate did not rise much. The actual inflation rate never exceeded the BOJ’s 2-percent target, except for mechanical increases from consumption-tax hikes.

This time may be different. The BOJ has continued its extraordinarily loose monetary policy despite mounting domestic complaints about yen depreciation and rising import prices. In this sense, the current situation provides the BOJ an opportunity to prove that their monetary-policy stance really changed after Governor Kuroda took over 10 years ago. If the BOJ succeeds, the Japanese economy will finally be able to put deflation behind it.

There are some signs that inflation is beginning to come back in Japan. The year-on-year Consumer Price Index (CPI) inflation rate for September was 3.0 percent, the highest in 31 years (except the years of consumption-tax hikes) and a full percentage point above the target. The core CPI, which excludes fresh food and energy prices, also rose by 1.8 percent from September last year. Although salaries appear stagnant, this is mostly due to decreased working hours for many workers. On a per-hour basis, wages have also risen. The annual wage negotiations coordinated by the Japanese Trade Union Confederation (JTUC), RENGO, the dominant national association of labor unions, resulted in a wage increase of more than 2 percent on average in the spring of 2022. For the negotiations next spring, RENGO targets a 5-percent rise.

To the extent that price and wage inflation rates are the results of less sticky expectations, this is a good sign. At the same time, Japan wants to avoid too much inflation. It seems appropriate for the BOJ to continue its unconventional monetary policy for now and finally dislodge deflationary expectations. But the BOJ must exit smoothly from unconventional monetary policy soon so that it can contain the inflation rate at a reasonable level. Thus, the Bank of Japan faces the challenge of navigating through a narrow path between premature tightening and overdue normalization.

The BOJ is already facing increasing pressure by continuing its yield-curve control. As central banks other than the BOJ raised interest rates and the yen declined this year, bond yields rose. In late March, the BOJ introduced the “continuous limit pricing operation” that purchases unlimited amounts of specified 10-year government bonds at a set price over a few days, trying to hold down the yield curve. Despite several subsequent continuous limit pricing operations, the market pressure for higher yields increased. Figure 1 shows the yield curves for Japanese government bonds on several dates: January 11, before the first continuous limit pricing operation and yen depreciation; March 22, when the yen/dollar rate reached 120; June 2, when the yen depreciated below 130 yen/dollar; September 2, when the yen/dollar rate moved above 140; and October 20, when the yen broke the ceiling of 150 yen/dollar. As the yield curve has shifted upward, it has become more obvious that the 10-year rate has been suppressed. Like the Reserve Bank of Australia (RBA) late last year, the BOJ may be forced by the market to abandon its yield-curve control. 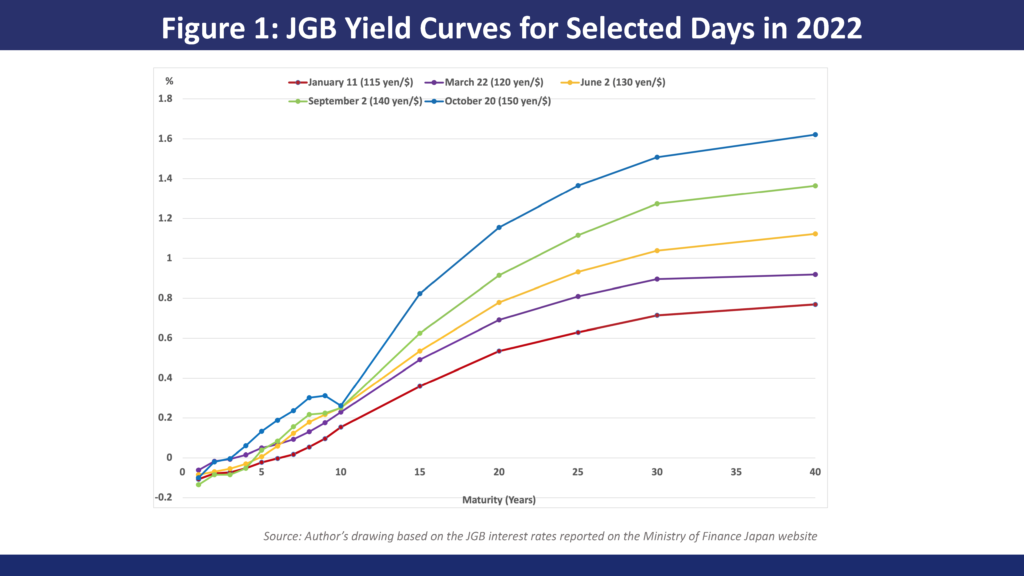 We do not know whether the process of terminating the BOJ’s yield-curve control will be more (or less) orderly than the RBA’s experience. Either way, it will start the unwinding of the BOJ’s unconventional monetary policy. After ending its yield-curve control, the BOJ will have to gradually shrink its balance sheet by reducing its holdings of government bonds, commercial papers, real estate investment trusts (REITs) and exchange-traded funds (ETFs). The BOJ will have to end its negative interest-rate policy and eventually start raising the policy interest rate, too.

Unwinding all unconventional monetary-policy measures may run into various problems. The recent turmoil involving UK gilts (gilt-edged securities) and LDI (liability-driven investment) funds suggests one potential difficulty that Japan can also get into. In the United Kingdom, the growth plan of the government led by former Prime Minister Liz Truss, which included various tax cuts and new expenditures that were unfunded, triggered sudden rises in gilt yields, which, in turn, put many LDI funds in trouble. To prevent financial instability, the Bank of England (BOE) was compelled to commit to buying UK gilts, pausing the unwinding of their gilt holdings that had started earlier this year.

Japan’s fiscal situation is much worse than the UK’s. According to the World Economic Outlook of the IMF (International Monetary Fund), the gross government debt of Japan was estimated to be 263 percent at the end of 2021. This is much higher than the levels of the UK (95 percent) and even Italy (151 percent). Japan’s extremely high level of government debt is not new. Many observers have argued that Japan’s fiscal situation has not been sustainable for more than a decade, but the Japanese Government Bonds (JGB) market has been surprisingly stable.

The past tranquility in the JGB market does not imply that problems will not emerge in the near future. One important reason behind the continued low JGB yields is the BOJ’s policy to accumulate JGBs (and other securities) to keep interest rates extremely low. Unwinding this unconventional monetary policy in the future may ignite sustainability concerns and trigger sudden rises in JGB yields. Some may argue that inflation would reduce the value of outstanding JGBs with long maturities and hence, help fiscal sustainability. The room for such an improvement has been much reduced after the BOJ’s purchases of JGBs essentially replaced long-term government debt with the BOJ liability (which matures overnight). Thus, if we consider the consolidated government sector, the effective maturity of its debt is much lower.

The fiscal situation has also deteriorated during the COVID-19 crisis. The budget for this fiscal year (April 2022 to March 2023) already adds 24 trillion yen (about 4.2 percent of gross domestic product [GDP]) of new debt. The government is currently discussing additional fiscal measures, including subsidies to electric-power companies, to contain rises in electricity bills. The total size of package is advertised to exceed 70 trillion yen.

Given the apparent unsustainability of government finances, the BOJ will need to watch how the market reacts to the unwinding of various unconventional monetary-policy measures. It would be ideal to put the government’s finances in order before the BOJ embarks on the process of returning to conventional monetary policy.

But the BOJ cannot address these fiscal concerns. Only the government can.

ABOUT THE AUTHOR
Takeo Hoshi is the Dean of the Graduate School of Economics at the University of Tokyo. Mr. Hoshi is also the Co-Chairman of the Academic Board of the Center for Industrial Development and Environmental Governance at Tsinghua University. His past academic appointments include faculty positions at Stanford University and the University of California, San Diego.
Back To Top
Bank of England (BoE)Bank of Japan (BoJ)BankingConsumer Price Index (CPI)Haruhiko KurodaInternational Monetary Fund (IMF)JapanJapanese Trade Union Confederation (JTUC)Monetary PolicyReserve Bank of Australia (RBA)Takeo HoshiUniversity of Tokyo
0 comment 0 FacebookTwitterPinterestEmail
previous post