Top Posts
Enabling the Drive Toward Green Finance with Technology
Why Have Tin Prices Struggled in 2022?
The Devil We Thought We Knew
How China Has Managed to Avoid the Inflation Bug
Are Your Bank’s Digital Marketing Metrics Meaningful?
Identifying Beneficial Ownership: A Regulatory Conundrum
Home Banking US Monetary Policy
Banking 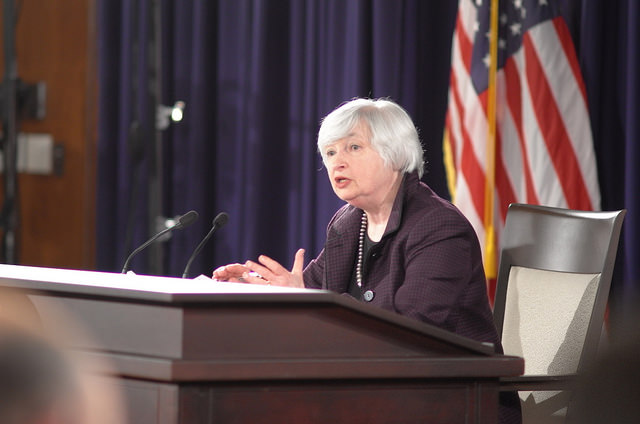 With the progression of globalisation, all nations and their economic development are increasingly interconnected. This is particularly the case with the United States. US monetary and fiscal policies, set by the Federal Reserve and Congress, have a far-reaching and important impact on most nations across the globe and the economic progress of these countries. In America there has been a moderate improvement in jobs growth over the past year, and this indicator is being closely watched by economic and market participants across the globe. Additionally, worldwide audiences are keen to track US inflation levels. These indicators may help market participants to predict the next move of the US central bank—the Federal Reserve (the Fed)—and the potential knock-on effects for economies across the globe. Although jobs growth has seen some progress, the additional indicator of inflation has not progressed anywhere near as much as expected and remains below the Fed’s target level. The US inflation rate has remained below its target level for a persistently longer period than anticipated by the Fed and other economic experts and advisers, and the concern is growing that it will become stubbornly entrenched at these low levels. This is a major concern for both the US and wider global economy. The Eurozone is in a dangerous economic position, and oil prices and the Russian economy are tumbling. This makes the risk of another period of economic recession quite high, which previously has been defended against by cutting interest rates. However, at this time, if an economy falls into recession, there is not much room to cut interest rates—with most nations’ interest rates already at all-time low levels, varying around the 0.5-percent mark. Without this measure under recessionary conditions, governments and central bankers will struggle to restore growth, leading to further economic difficulties and contractions, against which they have fought for the past seven years. As US inflation falls lower, the likelihood of US interest-rate hikes diminishes—and this means that the economies of the US and the world will struggle to grow and expand.

An additional concern for the US economy and its vital indicators is the misunderstanding of employment figures. Popular indicators may demonstrate close to full employment levels for the US, but participation rates and wages remain moderately low and concerning. The potential of the labour force is not being fully utilised—with hours and productivity still at low levels, and wages growing at a slow rate. This lack of proper use of the labour force represents the inefficiency of the US economy and the underperformance of one of the world’s largest economic contributors. The unemployment rate target for the Fed is between 5.2 and 5.5 percent, and with the unemployment rate last recorded at 5.9 percent, the US is not too far from reaching this target. However, this figure does not represent the full picture in terms of the US workforce and labour market nor the true economic development and progress of the US.

Statements from the Fed have most recently been hinting at the potential to increase US interest rates initially around halfway through 2015. However, economic struggles persist that would suggest that interest-rate rises should in fact be made further off in time. On a global platform, there are a number of potential downside risks that seriously need to be taken into consideration. The plummeting price of oil and the tumbling rouble are growing concerns. As one of the world’s major economies ( Russia’s) limps along—and the situation is only exacerbated by the increasing geopolitical tensions between Russia and the Western economies over Russia’s actions and conflicts with Ukraine—the US must tread very carefully when setting monetary policy. There are a number of delicate situations hanging in the balance across the globe. A possible market shock has the potential to set off a spiral of downward market activity and an economic shift from which all nations across the globe would have difficulty recovering. The potential of a Russian financial crisis is not the only major risk. The Eurozone is entrenched in an economic slump and has been persistently struggling to spark upward economic momentum over the past few years. Further to this, Eurozone leaders are struggling to come up with solutions to resolve the situation—hampered by conflicting goals between nations within the Eurozone bloc. There is also the potential for a China-based market shock—as the country’s economy risks experiencing a hard and sharp reversal from the high levels of economic growth enjoyed over the past few years. In addition to these major concerns, the US itself has some sizeable concerns and risks that must be considered in balancing US monetary policy—both in terms of the impact on US economic progress and of the potential broad and deep global impact.

The US Fed has a target inflation level of two percent, officially measured as the price index for personal consumption expenditures (PCE). However, policymakers should take note that PCE inflation has historically been recorded below target, often significantly below, and remains below target at present. An array of inflation measures should be incorporated into setting monetary policy, as one indicator alone may prove misleading and ineffective. When looking at inflation, the plummeting oil price is a significant concern. On the upside, the lowered energy price has the potential to help boost household spending and income, and stimulate the economy through consumption, driving inflation upward effectively. However, given the array of contending factors, this is not the most likely scenario. In particular the lower oil price stems from a contraction in demand—which is a much larger factor than the potential boost to household spending that may occur. The falling oil price reflects a falling global economic demand for oil—as industries, economies and businesses have slowed and in some cases stalled altogether over the past few years. Additionally the lower oil price adds to global disinflationary pressure—through cheaper commodities and dollar strengthening and a growing downward pressure on the wages of the over-supplied global labour force. Despite inflation levels remaining below target, the US Fed chose to end its quantitative-easing programme of asset purchases. In addition the Fed is now hinting it may raise interest rates during the coming year, although the economy is not showing signs of reaching target levels for this policy change. This may prove to be a high-risk move for the global economy; while inflation is low, the Fed will have less ability to raise interest rates without triggering deflation. If the economy reaches deflation in a state of already low interest rates, the Fed, alongside central banks across the globe, will struggle to come up with effective solutions to stimulate growth. The only option may be to implement drastic, untested, unconventional methods that may trigger shocks and further potential economic turmoil.

Will Millennials Fuel the Rise of Challenger Banks?