Top Posts
How Gamification is Catapulting Digital Banking to the Next Level
Challenges Remain, But There Are Opportunities to Be Had in...
Interview with Mr. Olukayode Pitan, Chief Executive Officer and Managing...
Commodities Outlook for 2023
The Value of Cash in a Time of Crisis: How...
The US-Africa Leaders Summit: Fostering a Closer Relationship with the...
Home Banking As Venezuela Slips into Chaos, What Is Left of its Central Bank?
Banking 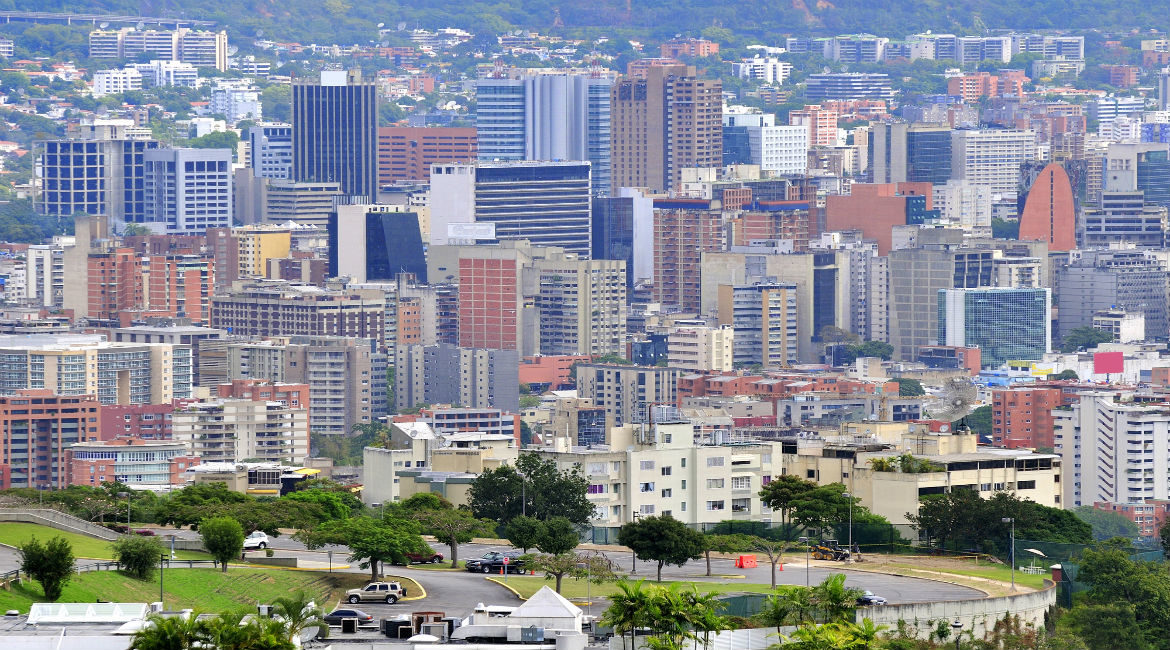 Venezuela is quickly slipping into political chaos. Daily protests through the streets of Caracas are pitting civilians against military personnel, which has resulted in increasingly frequent violence and droves of deaths in the streets. Protesters and government opposition leaders are demanding a change in government and the ouster of President Nicolás Maduro Moros due to official mismanagement, corruption and a regime that consistently flouts the tenets of a liberal democracy. Maduro has effectively installed himself as a dictator by taking control of the supreme court while blocking any movements by the opposition-controlled legislature. More importantly, Maduro wields the heft of the Venezuelan military with impunity and has jailed various opposition leaders, including Henrique Capriles and Leopoldo López.

This growing dictatorial tendency has caused Venezuela’s membership in both the Organization of American States (OAS) and the Common Market of the South (Mercosur) to be called into question by its representative leaders. While the degradation of democratic rule is a driving factor in the social unrest currently gripping the country, the economy is more fundamental. With a massive economic downturn, Venezuela has seen price controls result in widespread shortages of goods across the country. Essentials such as flour and toilet paper are scarce, and citizens are said to line up for hours while awaiting opportunities to purchase them.

With such desperate issues permeating the Venezuelan regime, it would seem easy to forget about the more nuanced minutiae of government that must continue plugging away for the country to maintain even this scant level of functionality. Amid an increasingly turbulent political and social environment, the Central Bank of Venezuela (BCV) has been desperately making decisions and deals that are nothing short of a miracle. The tightrope act performed by the BCV has been done surprisingly well throughout these conditions, but options are quickly wearing thin, and the future may be thrown into question if changes aren’t made to stymie the growing unrest. Investors are quickly losing confidence in the country, and foreign reserves have dwindled in the years since the end of the Chávez administration.

The conditions currently plaguing Maduro hark back to the times of former President Hugo Chávez. Chávez came into power when oil prices were at record highs—allowing him to fund his redistributive policies and buy support from the lower-class electorate in much of Venezuela. With the world’s largest proven oil reserves, Venezuela’s major export is petroleum products, controlled through the state-owned Petróleos de Venezuela (PDVSA) oil company. The state-controlled oil exports were used to buy domestic public support through subsidies for the poor, as well as a sphere of influence on the international stage through oil subsidies for like-minded countries such as Cuba, Bolivia, and Ecuador.

Chávez’s untimely death in 2013 saw his chosen successor Maduro’s arrival to government, coupled with a continuation of Chavista policies. The policies were effective until 2015, when the global price of oil dropped from $100/barrel to nearly $50/barrel. The subsidies that won Chávez so much support quickly evaporated, causing public discontent. With prices for oil at record lows, Venezuela’s foreign-currency reserves plummeted, clipping the country’s ability to purchase foreign goods and causing widespread shortages of basic items

With supplies dwindling, prices skyrocketed, and poorer citizens had even less access to basic goods—such as flour and toilet paper. To curb these effects, the Maduro government implemented price controls, but with prices below the cost of production, many producers stopped supplying these goods—further exacerbating the issue. Again, the government’s approach to this was further tampering with economic forces by increasing the minimum wage—as high as 454 percent in 2016. These interventions, predictably, resulted in rampant inflation. The BCV provided a report to the International Monetary Fund (IMF) stating that national inflation in 2016 was a staggering 274 percent. Despite this astronomical amount, many economists believe that the true inflation statistics are far, far higher than what the BCV is reporting.

For instance, Ecoanalitica, a Venezuelan consultancy firm, estimates inflation to be 525 percent for 2016. Meanwhile, Torino Capital, a New York-based investment bank, contests that the true inflation statistic is 453 percent. Nonetheless, the IMF’s inflation statistics show that Venezuela has the “second highest inflation in the world”, closely trailing South Sudan, which posted 480 percent inflation in 2016. For the most part, the BCV has been unwilling to provide official statistics or access to information for independent analysis, suggesting that the situation may be starker than the country is willing to publicly admit.

The BCV has not been immune to the political instability and shakeups currently rocking the Venezuelan government. On January 20 of this year, Nelson Merentes—president of the BCV and “one of the longest-serving public officials in Venezuela”—submitted his resignation upon the request of President Maduro. Maduro’s reasoning for the shuffle at the top was to begin a new stage of economic development for the fracturing country and to “fight against the domestic and foreign mafias that attack [Venezuela’s] currency”. Merentes served under the Chavista regime for years—serving, intermittently, as the head of the BCV as well as other roles.

Merentes’ replacement, Ricardo Sanguino, is similarly a long-serving member of the Chavista government—having spent a long time in the national assembly. An economist and a United Socialist Party of Venezuela National Assembly member for the state of Táchira, Sanguino seems like a fitting replacement for the former president. However, since Chávez had previously gutted the BCV of much of its autonomy, it is expected that little will change under this new management as the BCV will continue the same mandate handed down by Maduro. Sanguino, then, has the Atlantean task of successfully navigating an increasingly complicated economic environment with little autonomy and pressures from every direction.

Merentes achieved this through several savvy, yet questionable, deals with foreign investors through a conjoined effort between the BCV and PDVSA. For instance, in February, rumors swirled that the BCV was considering a deal with the Nomura investment bank that would include 1 billion USD in exchange for bonds issued by PDVSA. The proposed deal—called “repo” by some—would provide Nomura with PDVSA bonds bearing a face value of 3 million USD that would mature by 2022. Similarly, in April, Stratfor reported that the BCV was “in the third week of negotiations over $500 million in financing from New York-based investment fund Fintech Advisory, Inc.”. The exchange would, again, include bonds issued by PDVSA—this time for a value of 1.5 billion USD.

Since the fallout of oil prices, Venezuela’s foreign-currency reserves have dropped to a 15-year low of 10 billion USD. This has caused an existential issue for the government as the country still owes 7.2 billion USD in outstanding debt payments. A foreign-debt default could be catastrophic as it would cast the country into lengthy lawsuits from creditors, not unlike those that have plagued Argentina for 15 years. To combat a lack of foreign reserves, the BCV has conducted several gold-swap transactions to shore up its liquidity. Chávez’s penchant for gold bullion—rather than foreign reserves—caused much of the country’s wealth to be held in illiquid gold bullion. At present, the BCV has been in talks with Deutsche Bank for just such a gold-swap transaction. While the details of the deal have yet to be released, it has been heavily and publicly protested by the Venezuelan opposition, which states that if these deals are permitted, they will be directly financing the dictatorial and corrupt actions of the current government. Public opinion has cast the German bank in the light of an autocratic collaborator, giving executives pause regarding the swap transaction. The National Assembly’s president, Julio Borges, has been at the forefront of this movement by sending letters “to leading global banks warning them of the risk to their reputations and bottom line if they throw a lifeline to Maduro”.

Nonetheless, the BCV has continued to keep the government afloat. In April, a set of PDVSA bonds were successfully paid out by the state-owned oil company, summing 2.2 billion USD. Originally valued at 1.1 billion USD, the bonds had come due following a seven-month period during which waning investor confidence caused the value to fluctuate with the increasingly unstable Venezuelan situation. However, the successful payment coupled with the fact that national reserves did not suffer the hit expected suggest that the BCV is making the correct and necessary moves to fulfill its foreign-debt obligations. Still, political unrest casts a long shadow on the Caribbean country. Rumors swirled that opposition leader Leopoldo López had died after being rushed to the hospital from his prison cell. The rumors stoked fears that more protests would follow—shaking the very confidence that had just been built up following the debt repayment. It appears that the BCV will be continuously stuck in a difficult position until either the social unrest subsides, or the government changes hands. Though some may argue that they are contributing to the continued rule of a budding despot, others would suggest that they are attempting to keep the last shreds of a once-great nation together.