Why Italy’s Banking Crisis Is Far from Over 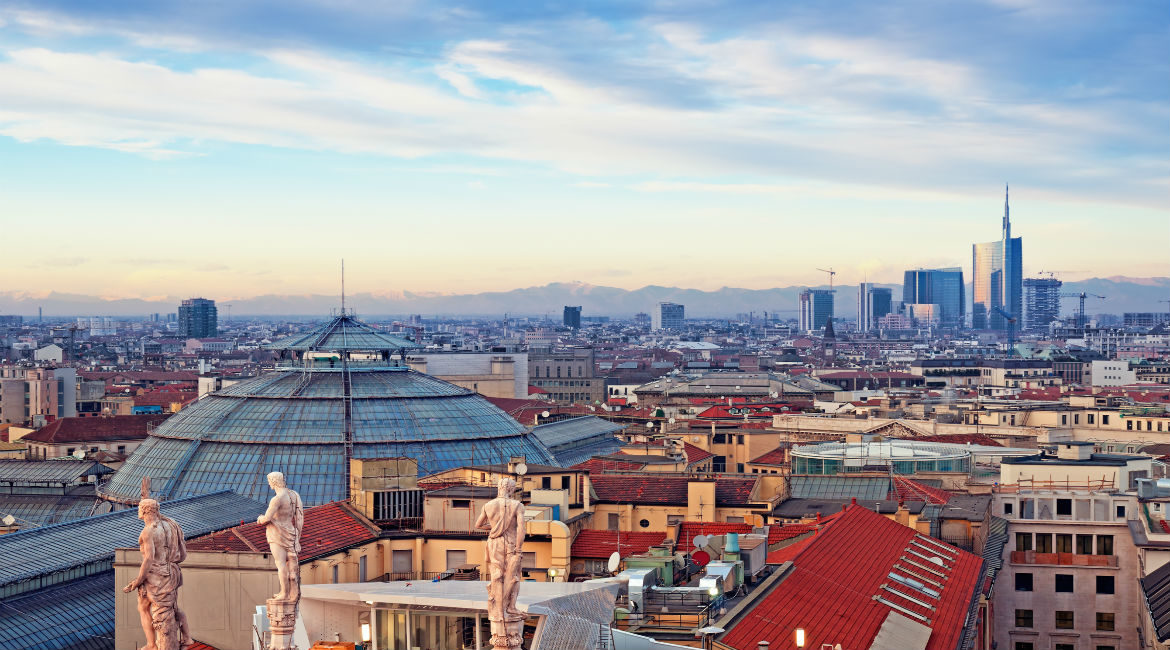 In recent weeks, the eyes of the financial world have been firmly fixed on Turkey, since its lira plunged in reaction to a doubling of trade tariffs by the United States. While issues there are undoubtedly concerning, many still consider the problems being faced by certain parts of the eurozone as potentially the most consequential from a global perspective—not least by Italy, which has remained shrouded in uncertainty since its March 2018 election. And although the Southern European nation’s banking sector has been trying to overcome its much-lamented debt woes since a series of bailouts was initiated last year, the assessment going forward for Italian lenders in the wake of the new coalition government’s commencement looks, once again, decidedly problematic.

It’s no secret that Italy has been home to one of the world’s most fragile banking sectors during most of this decade. By 2015, the debt on lenders’ balance sheets had ballooned to €360 billion, which represented a mighty one-fifth of total loan value within the country’s banking sector. Since then, however, strong efforts have been made to restructure ailing banks and shed bad loans. But while progress has been made on certain fronts, significant problems remain. The chart below, which was first created by Risk.net, for instance, shows that credit quality remains underwhelming for 45 large Italian banks, as compared to 540 large European Union (EU) banks, and the top 30 global systemically important banks. 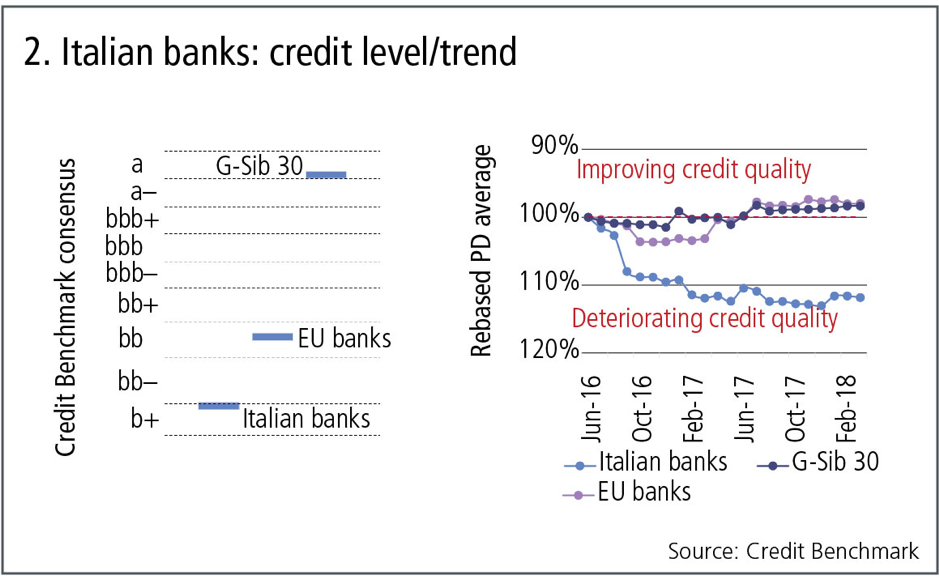 Using a consensus credit risk (CBC) measure, created by financial-data analytics company Credit Benchmark and compiled by gauging the views of the world’s leading financial institutions, the chart shows that the CBC is easily the poorest for large Italian banks, followed by EU banks and then the G-SIB (global systematically important banks) 30 being the safest. It also shows that the credit quality of Italian lenders has weakened by more than 10 percent since June 2016, while it has improved for their EU and G-SIB peers. On a positive note, there does not appear to be any marked deterioration in Italian banks’ credit quality in the last year or so.

Nevertheless, fears about the health of the Italian banking sector remain as strong as ever, with the FTSE Italia All-Share Banks Index down 17 percent in 2018, providing some indication of those fears. Much of the concern is over the banks’ “doom loop”, which has emerged as they add to their already substantial holdings of Italian government bonds, the yields of which have skyrocketed to four-year highs within the last month.

Currently, banks rely on sovereign debt as the basis of their first-tier capital required to meet regulatory thresholds, as well as protect themselves against unexpected losses. For the country’s two biggest lenders, UniCredit and Intesa Sanpaolo, Italian sovereign debt constitutes a whopping 145 percent of Tier 1 capital. And the top six largest lenders—with Banca Monte dei Paschi di Siena, Banco Popolare, UBI Banca and Banca Nazionale del Lavoro also included—still have €143 billion worth of Italian debt securities on their balance sheets, which is more than the €137 billion of debt that systemic banks in the rest of Europe combined hold.

But the Bank of Italy has reported that foreign investors are selling off their Italian government-bond holdings in droves—a net €33 billion was sold in June, which followed a further €25 billion shed in May. This has mainly been prompted by concerns that the government will soon adopt a policy of fiscal expansion that many consider to be irresponsible. Indeed, the government’s spending plans are justifiably causing consternation; with public debt already sitting at some 130 percent of gross domestic product (GDP), the coalition administration of the Five Star Movement and far-right League party has promised to both cut taxes andboost spending in areas such as welfare and pensions, which estimates suggest could cost a further $74 billion to $142 billion. The flagship policy of universal income for the poor, for example, is expected to cost around €17 billion per year.

With EU rules limiting government budget deficits and debt to 3 percent and 60 percent of GDP respectively, and also requiring that governments seek balanced budgets, it would seem that Italy is on a collision course with Brussels. The sell-off of government bonds in anticipation of such a confrontation has triggered a massive surge in bond yields and a precipitous fall in their values, and as a result, it has eaten into banks’ capital buffers. Indeed, the sell-off has caused UniCredit and Intesa to both lose around one-third of a percentage point in core capital, while Jefferies Group expects a further 0.15 to 0.20 percentage point to be shaved off at both banks during this current third quarter, based on current bond-yield levels.

At the same time, however, waning interest in Italian debt is also putting pressure on Italian lenders to step in and prop up demand. But given their aforementioned problems, they may not have the capacity to do so. According to Goldman Sachs analyst Matteo Crimella, it remains a “fundamental question for the coming months” as to whether domestic banks will be able to buy sovereign debt; and given the regulatory and supervisory changes, along with the risk of further deterioration in banks’ capital ratios due to debt-market weakness, it could “raise the bar for domestic banks to step in as buyers”. If they do increase their bond-buying, moreover, it could have grave risks for their balance sheets in the face of falling bond prices.

Furthermore, it is widely expected that ratings agencies such as Moody’s, Fitch Group and Standard & Poor’s (S&P) will downgrade Italy’s credit rating to just one notch above junk status. Such action is likely to prompt a further sell-off of Italian government bonds, as it would translate into higher borrowing costs for the Italian government and corporates based in the country, which in turn would spur a further spike in yields and concurrent collapse in bond prices. And a downgrade to junk status would also exclude Italian debt from the European Central Bank’s (ECB’s) bond-buying—a policy that’s already set to end in December. Moody’s seems the most likely to act first, given that it has had the country’s credit rating on negative watch since 2016, which is normally a precursor to a downgrade.

While last year’s modest acceleration in GDP growth helped banks to offload some of their toxic debt to buyers, this current slowdown is conversely going to make it tougher to find such buyers. The slowdown may even add to banks’ outstanding burdens of nonperforming loans (NPLs), and will only worsen the doom loop. And to compound matters, the new government may exacerbate the situation for the banking system—through its commitment to anti-business industrial and labour policies, it is likely that banks will find it harder to enforce collateral, which will ultimately make it more difficult for them to clean up their balance sheets.

All in all, the outlook still remains precarious for Italian banking. With nominal interest rates at zero, it is going to be tough to stage a convincing rebound any time soon. Although Italy’s debt-to-GDP ratio has been moving towards more manageable levels recently, and although the government’s expansionary fiscal plans may bolster the economy in the near-term, the political risk stemming from the new government and its defiance of EU rules does not bode well for banks. With pressure mounting for them to increase their government-debt exposure, moreover, another sell-off could substantially weaken their positions. The crisis, it would seem, is set to rumble on for some time to come.

How the Adoption of AI and Automation in Banking Is Evolving