Top Posts
Challenges Remain, But There Are Opportunities to Be Had in...
Interview with Mr. Olukayode Pitan, Chief Executive Officer and Managing...
Commodities Outlook for 2023
The Value of Cash in a Time of Crisis: How...
The US-Africa Leaders Summit: Fostering a Closer Relationship with the...
Three Key Sectors in Which to Invest in 2023
Home Banking Will South Africa’s Banking Sector Suffer from the Country’s Political Crisis?
Banking 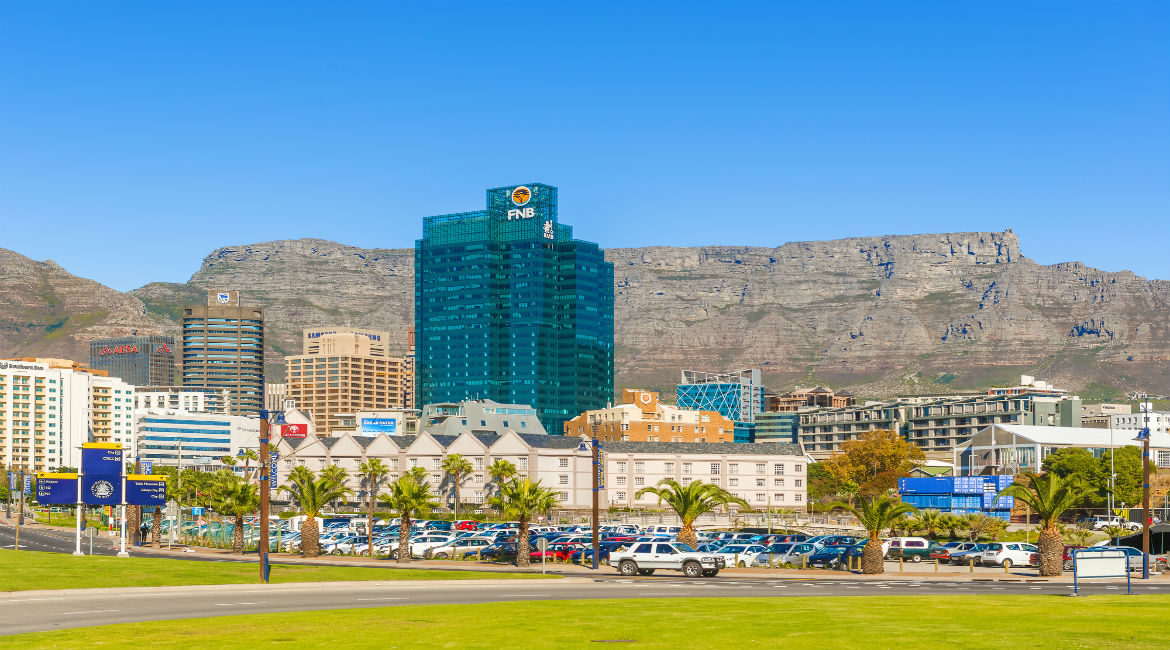 The economic outlook for South Africa has weakened drastically this year. On April 3, Standard & Poor’s (S&P) downgraded the country’s credit rating from BBB- to a junk rating of BB+ just a few days after the decision was taken by the country’s president, Jacob Zuma, to fire his finance minister, Pravin Gordhan, and his deputy, Mcebisi Jonas. Zuma’s actions were taken despite warnings from financial markets and his fellow African National Congress (ANC) party members not to do so. As such, the surprise move triggered an immediate plunge in the South African rand, while banks listed on the JSE (Johannesburg Stock Exchange) saw $31 billion of their market capitalisation wiped out almost immediately in response to the news. With large-scale public protests in full flow since then, many now expect further economic deterioration to transpire throughout the country. As such, pressure is now mounting on Zuma to stand down.

Gordhan’s removal follows a catalogue of events that have soured the political climate in South Africa. It has been alleged that ever since Gordhan was brought back as Zuma’s finance minister after intermittently being demoted to a local government minister in 2014, he has been at odds with the president over a whole range of issues. Last year, the country’s biggest lenders terminated their relationships with the company Oakbay Investments, a company owned by the Gupta family who are friends of Zuma’s and who also have business ties with his son. At the time, Gordhan was deemed to have inadvertently supported the banks through his admission that he was powerless to prevent them from closing their Oakbay accounts, as well as through his court statement that mentioned 72 suspicious transactions over the course of four years totalling 6.8 billion rand ($475 million) involving Gupta-owned companies that were likely to have persuaded the banks to sever their connections. FirstRand, South Africa’s top bank by assets, almost immediately supported Gordhan’s position. According to the banks’ filings, their concerns about the Guptas ranged from money-laundering risks and suspicious transactions to the legitimacy of the Guptas’ political connections.

The Guptas responded by highlighting that all transactions under scrutiny from South Africa’s anti-money-laundering agency had already been approved by the respective banks. Oakbay also attested that behind the scenes, Gordhan was involved in the closure of their bank accounts by advising business leaders that they should “clip the wings” of the Guptas. According to the acting Oakbay CEO Ronica Ragavan, this advice resulted in “a sudden refusal of many South African companies to conduct business with any entity who is linked to the Gupta family”. Whether Gordhan’s replacement, Malusi Gigaba, will continue with the case against the Guptas remains to be seen.

The events caused S&P to justify the downgrade by stating that “the executive changes initiated by President Zuma have put at risk fiscal and growth outcomes” and that “the negative outlook reflects our view that political risks will remain elevated this year”. Fellow ratings agency Moody’s soon followed suit by announcing that South Africa’s rating, which it rated just above junk, would be placed on review, again on the back of Zuma’s cabinet reshuffle. The actions taken by ratings agencies, therefore, are only likely to exacerbate an already fragile situation in a country reaching alarming levels of debt. The country’s public-debt-to-GDP ratio hit 50 percent last year, while the World Bank also reported that South Africans are the world’s biggest borrowers. Furthermore, South Africa’s National Credit Regulator Statistics calculated that one-fifth of consumers in the country are three months in arrears.

The downgrade is also expected to make it significantly more difficult for the government and financial institutions to borrow, while it is more than likely that the country will see a loss in business flow, as trading partners will likely opt to do business in more stable economies. With higher interest expected to materialise as a result, rising borrowing costs will severely dent the prospects for ordinary South Africans; and with South Africa’s GDP (gross domestic product) growing by a mere 0.3 percent in 2016, moreover, a potentially looming recession could make the macroeconomic situation increasingly bleak. 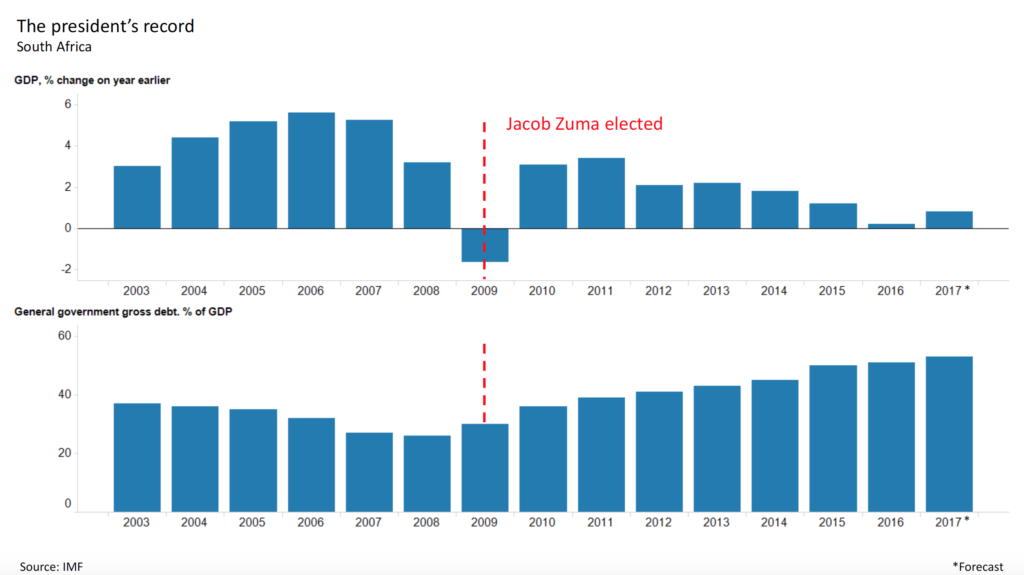 Ratings for several South African lenders were also downgraded by S&P, including FirstRand Bank, FirstRand Ltd, Nedbank, Investec Bank, Absa Bank, Barclays Africa Group and BNP Paribas Personal Finance South Africa. Fitch followed suit with similar downgrades soon after. Such action was to be expected, given that it is seldom the case that banks maintain higher ratings than the government. Nevertheless, the downgrades are likely to have a profound impact on South Africa’s banking industry; indeed, the country’s main banking index plummeted to its lowest level in six months just one day after the action taken by S&P. Overall, banking shares lost more than 11 percent of their value in the following week. South African banks experienced similar headwinds following the December 2015 sacking of Nhlanhla Nene, the then finance minister. In the two days following Nene’s removal, 155 billion rand ($11.2 billion) was wiped off the banking index’s market value. The day after Gordhan’s removal, the index shed 61 billion rand.

The S&P itself has attributed the lowering of the banks’ rating this time around to the country’s instability as opposed to any internal failing in their operations. Given the impediment to economic growth that is likely to stem from S&P’s actions—mainly through higher borrowing costs—the resultant increase in nonperforming loans along with the expected rise in the cost of capital for banks is highly likely to put banks’ loan books under severe pressure.

The Banking Association South Africa (BASA) has described the downgrades as devastating, with the agency’s managing director, Cas Coovadia, lamenting the “immediate and severe impact on the currency”, as well as the now-constrained ability of the country to attract foreign investment. Coovadia also anticipates “a marked steep rise in prices of goods and services across the board” to soon transpire, with BASA putting the blame squarely on Zuma’s cabinet reshuffle and suggesting that Fitch’s negative response provides clear evidence that it “was not in the national interest”.

That being said, few expect South Africa to suffer a full-blown banking crisis, mainly as its lenders are sufficiently well-capitalised. S&P has stated that “amid slow economic growth and political turbulence‚ South African banks have been performing resiliently. The sector’s average return on assets improved to 1.3 percent in 2016 from 1.1 percent the previous year”. It expects the biggest lenders to remain profitable and continue to operate with low bad-debt levels. According to Ernst & Young, moreover, the average of return on equity for the country’s biggest banks was over 16 percent, which is a healthy figure when compared to the rest of the world. The central bank has also offered words of reassurance, recently stating that local banks are sufficiently funded to withstand the downgrade to junk status.

Separately, however, South Africa’s Competition Commission could impose fines on several local and foreign banks that it claims colluded in order to engage in the coordinated trading of foreign exchange dating back to at least 2007. A whole raft of banks are believed to be involved, including Standard Bank, Investec, JPMorgan Chase, BNP Paribas, Credit Suisse Group, Commerzbank AG, Standard New York Securities Inc., Macquarie Bank, Bank of America Merrill Lynch, ANZ (Australia and New Zealand Banking Group), Standard Chartered and Barclays Africa Group (Absa). The ruling ANC government has described the practices as “acts of corruption” that have “exposed the ethical crisis in the South African banking sector”.

This unwelcome episode aside, the coming months will be crucially important for both South Africa’s banks and the economy as a whole. Higher sovereign borrowing costs are likely to eventually lead to a decline of banks’ asset quality, funding and liquidity metrics, which in turn will hamper capital levels and profitability. Zuma defends his reshuffle, stating that it will bring “radical economic transformation”. However, unless he stands down, or at the least a clear fiscal policy to reignite growth is implemented sooner rather than later, the only transformation that South Africans will experience this year will be one that sees the country descend further into despair.

How Massive is Transaction Laundering? Now We Know…