Top Posts
Western Banks Willing to Accept the Short-Term Pain of Russian...
Why the US Is Ramping Up Its Presence in Somalia...
How Technology Is Helping to Solve Global Supply-Chain Issues
UK Inflation Climbs to Fresh 40-Year High
Extended Reality and the Metaverse Are Leading Financial Services into...
Digital Currency: India’s Move Towards a Digital Financial System
Home Brokerage 4 Reasons Dividend-Income Investors Should Consider Costco
Brokerage 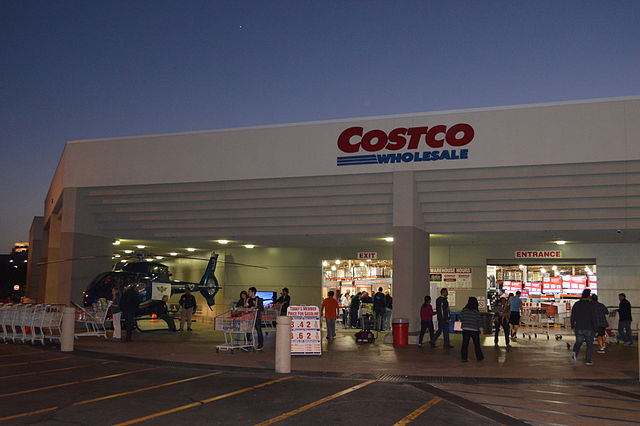 Costco (NASDAQ:COST) has been increasingly rewarding its shareholders with growing cash distributions over the years. At the end of the first quarter, the warehouse retailer hiked its dividend 12.68 percent to 40 cents a share.

While most Costco investors buy a stake in the company for its excellent growth opportunities, one cannot overlook the fact that it is evolving into a prodigious dividend payer. Let’s take a look at why dividend-income investors should consider Costco.

Costco may not be a ‘dividend aristocrat’ like Coca-Cola (KO), PepsiCo (PEP), Wal-Mart (WMT), McDonald’s (MCD), etc, but it has a reasonable history of payouts and increases. The company has paid quarterly dividends to shareholders consistently for eleven years in a row now. 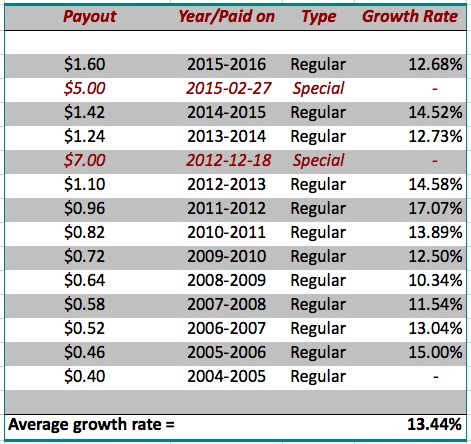 That’s not all, it has also raised its payouts in each of those eleven years, starting from 10 cents a share per quarter in May 2004 to 40 cents a share payout in the most recent quarter. That represents an average annual growth rate of 13.44 percent over the period. Bear in mind there was a financial crisis in between, when consumer sentiment had plunged, but the company remained committed to extending its cash returns to investors even then. A track record of consistent dividend payments and hikes augurs well for security of a future dividend stream.

Bear in mind cash reserves can burn out, debt markets can dry up, and companies can be forced to cut or eliminate their dividends. Even the greatest of the companies won’t be able to protect its dividend if it’s shelling out cash more than it generates.

However, Costco is unlikely to have any such problem in foreseeable future. At $1.60 a share annually, Costco’s dividend distributions represent only 30.7 percent of its $5.21 trailing twelve month EPS. By comparison Wal-Mart and Home Depot (HD) pay about half of their earnings out in dividends. It also indicates that Costco can still hike its dividend by over 100 percent without any increase in free cash flow.

Costco’s relatively low payout ratio is partially due to the fact that its stock price has more than doubled in the past five years and as a result the effect of the dividend increases have kept the yield in a similar range. To conclude the point, call it the safety net or room to boost its payout ratio higher, Costco has enough.

At first glance, a yearly dividend of $1.60 for a scanty 1.2 percent yield won’t excite most income investors, for they can easily double their income rate investing with other retailers like Home Depot, Target (TGT) and Wal-Mart.

However, that won’t be an accurate analysis of a dividend stock and investors should look for more than just distribution yields. Taking a closer look, Costco has also paid two huge “special” dividends to investors in the last three years – $7 per share in November 2012 and $5 per share in February this year – along with its regular payments. Including those payments the company has actually paid out $15.89 a share over the last twelve quarters, which work out to a dividend yield of 3.8 percent. Doesn’t seem too bad now, does it?

It may be argued that income investors cannot predict a special payout. But Costco’s relatively low payout ratio suggests that management is cautious about promising cash payments to shareholders before other capital expenditure. In other words, it could raise the regular cash payments to shareholders just like other companies, but it keeps such return-decisions discretionary and not obligatory, allowing it the flexibility to find the best use of its cash in hand. And if the best use is to hand it back to shareholders, then it will pay that special dividend. The only reason I would think otherwise (that it won’t pay any more special dividends) is if the company’s cash reserves aren’t growing enough after accounting for expansion and other major CapEx.

Most discount retailers need to generate high sales volume to drive earnings and cash flow as their business model depend on profits from small sales markups. Costco also charges aggressively low prices for it products, which provides it a strong competitive edge over its peers with regards to cost advantage. In fact, no item is marked up by more than 15 percent, which means the company operates on razor-thin margins of generally 2 to 3 percent while providing great value for its customers. This value proposition promotes astounding loyalty from its customer base. With over 90 percent subscription-renewal rate, customers seem happy to have the privilege to shop in Costco’s 673 warehouses for a yearly fee.

And yes, Costco differs from its peers in that it makes most of its profit from steadier and more predictable membership fees. As a result, it generates more dependable cash flow over time. In the first quarter, the company raked in $584 million in membership fees compared to $561 million for the same quarter of 2014.

In turn, this adds to Costco’s financial strength to continue raising its dividend for years. The company has a pristine balance sheet with a net cash position, meaning Costco has more cash and cash equivalents than debt on its balance sheet. It had over $5 billion of cash on its books at end of the last quarter, while long-term debt stood at a manageable $4.8 billion.

Annual operating cash flow (OCF) hit $4 billion in 2014, up 18 percent over 2013. Its free cash flow (FCF) has fluctuated from time to time depending on capital expenditure – mainly to fund its expansion. However OCF has consistently grown over the long term, having more than doubled since 2009.

In the last two quarters, the company brought in nearly $2.03 billion in operating cash flow, whereas CapEx amounted to $1.17 billion, leaving a respectable $867 million in free cash flow for the period. But regular dividends totaled to only $156 million, or 18 percent of free cash flow.

Basically, the business generates truckloads of hard cash, and is remarkably well positioned to keep growing cash flow over time, providing it enough flexibility to continue hiking its quarterly dividend.

Costco’s management is shareholder-friendly and competent merchants who understand good capital allocation. The company has grown its revenues and earnings at respectable rates over the last few years. In it’s most recent quarter EPS was $1.17 compared to $1.07 in the year-ago quarter, while revenue came in flat. Comparable sales rose 7 percent in the quarter and it had 673 locations globally at quarter-end.

Costco spent $2 billion on new warehouses in last fiscal and plans to invest $2.7 billion on capital investments in fiscal 2015, including 20 store-openings over the next two quarters. In view of the profit it makes from each location, it makes sense that management prioritizes investments for expansion before sending excess cash back to shareholders.

When all is said and done, Costco still makes a good case for a dividend-income play. It has a reasonable dividend history, low payout ratio, possible special dividends and powerful and predictable cash flow. Costco’s dividend looks very safe and capable of sustaining long-term growth.