Top Posts
Challenges Remain, But There Are Opportunities to Be Had in...
Interview with Mr. Olukayode Pitan, Chief Executive Officer and Managing...
Commodities Outlook for 2023
The Value of Cash in a Time of Crisis: How...
The US-Africa Leaders Summit: Fostering a Closer Relationship with the...
Three Key Sectors in Which to Invest in 2023
Home Brokerage Accounting for the Cobalt Boom
Brokerage

Accounting for the Cobalt Boom 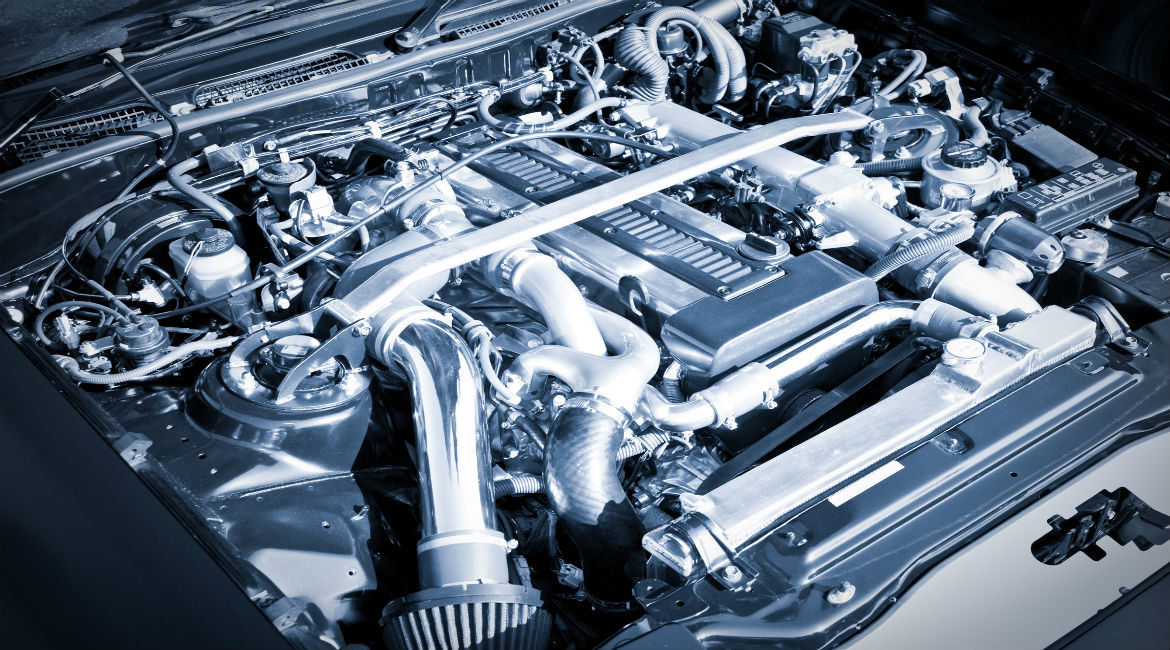 In April, after more than two years of upward momentum, the price of cobalt finally began to show signs of losing steam, leaving some to speculate whether or not the explosive multi-year rally undergone by the ferromagnetic metal had finally come to an end. By that point, prices had risen to levels not seen since 2008, representing the culmination of a sustained rally that began in 2016, after the metal hit a record low in February of that year. Prices have risen astronomically since then, with 2017 seeing a staggering 129-percent gain for the year, and notching up an end-of-year price of $75,500/tonne on the London Metal Exchange (LME), more than $50,000 higher than that February 2016 low. 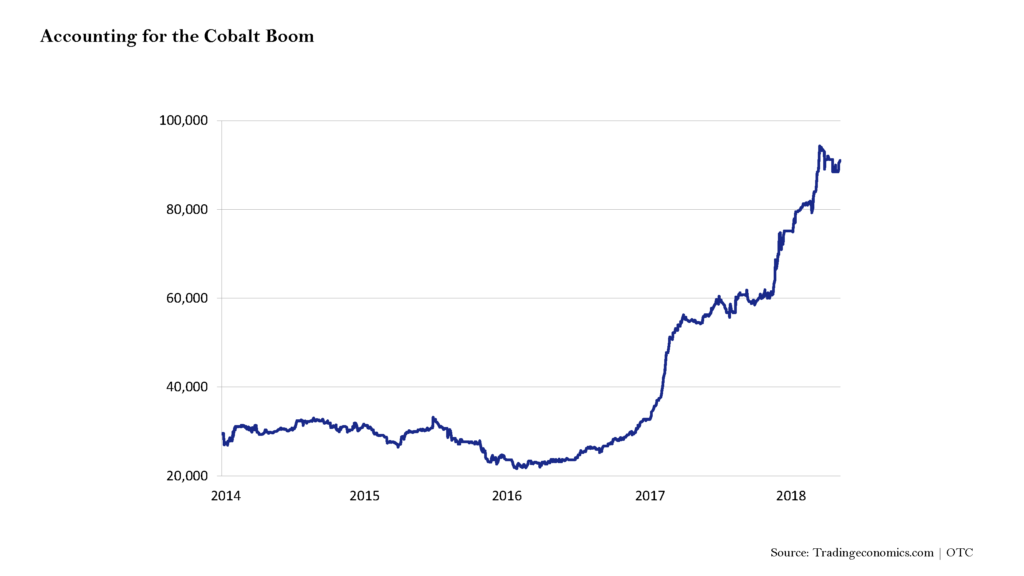 For thousands of years, cobalt has been commercially used in ceramics, glass and pottery, particularly as a way to add blue colour to such products. In more recent times, however, new use-cases and shifting market forces have driven a breathless rally in the metal’s value. Indeed, both soaring global demand and concerns over a shortage in global supply have caused the market to tighten dramatically in recent years, which in turn has supported consistently higher prices.

On the demand side, a veritable craze for rechargeable lithium-ion batteries has been the main factor in boosting cobalt prices, with leading commodities research-house Wood Mackenzie calculating that 49 percent of global cobalt demand was from the battery sector in 2017. These power sources are highly sought after at present, especially for their use in electric vehicles (EVs), which have seen a massive spike in interest in recent years. Indeed, several notable carmakers such as Tesla, BMW and Volkswagen have made efforts to secure long-term contracts for cobalt to be used in their vehicles’ batteries. Each new EV battery uses a whopping 10 kilogram of cobalt, which, according to BMO Markets, is more than 1,000 times the amount used in an iPhone. That said, Apple itself has also been a major contributory player in the boom, with cobalt also being a key ingredient of rechargeable batteries used in a variety of home electronics.

As far as specific countries are concerned, moreover, China has been the leading consumer of cobalt in recent years, accounting for approximately 44 percent of global consumption. The country initially purchases the cobalt in raw sulphide and oxide form, before refining it to isolate the cobalt to be used in the process for making cathodes for the batteries powering smartphones as well as for EVs. Today, China produces more than 80 percent of the world’s refined cobalt.

Much of the concern on the supply side is focused on the Central African nation of the Democratic Republic of Congo (DRC), where almost two-thirds of the world’s 110,000-tonne cobalt supply originates. In March, the country’s president, Joseph Kabila, signed a new mining code into law that is set to substantially raise the amount of royalties mining companies must pay the government to mine minerals across the board. It also removes a clause that protected miners from changes to the fiscal and customs regime for 10 years. Clearly this code represents a hefty rise in mining costs for firms looking to extract cobalt in the DRC, with royalties on cobalt revenues possibly rising from 2 percent to 10 percent, should the government designate cobalt a “strategic” metal.

Political instability, governance issues surrounding cobalt production and mounting concerns over the widespread use of child labour in the mining process have also contributed to the supply picture in the DRC. Such issues have been encouraging buyers to shop for their cobalt elsewhere, in such countries as Canada, the world’s second-biggest producer of the metal. Apple and Tesla have previously stated they will not use what they class as “unethical cobalt” in their batteries, with Tesla confirming it would only use cobalt mined in North America. However, with an increasing strain on global supply now transpiring, many believe that it will not be possible for North America to satisfy the needs of the EV market. Such concerns have thus added to the supply shortage sentiment.

For the most part, cobalt is also mostly extracted as a bi-product of other metals. In 2017, around 69 percent of the world’s cobalt was mined as a copper bi-product and 29 percent as a nickel bi-product. With the price of those two metals falling consistently, a considerable amount of their global production has been shuttered for being uneconomic. This has tightened global supply for cobalt as a result, and put additional upwards pressure on prices.

With prices easing in the last month or so, however, questions have arisen as to whether the cobalt rally is finally over. The production-consumption profile for the metal for the next few years suggests otherwise. The market is set to face further tightening on the supply side, while the electric-car revolution shows little sign of slowing anytime soon. Indeed, oil cartel OPEC (Organization of the Petroleum Exporting Countries) last year predicted that there will be more than 140 million electric cars on the roads by 2040. And overall demand for the metal, according to UK cobalt trading firm Darton Commodities, is being forecast to grow by more than 40 percent this year. Meanwhile, Tony Southgate, the head of strategic cobalt marketing at the Kazakh mining company Eurasian Resources Group (ERG), recently forecast that the cobalt boom “is guaranteed for the next seven to 10 years”. Speaking to popular metals publication Metal Bulletin, Mr Southgate also pointed out that “all the focus is on batteries but legacy cobalt uses are doing really well. Metal demand is very strong and producers are well sold”.

China is expected to drive much of the boom on the demand side as it seeks to dominate the electric-car industry, along with an expected boost in sales for the Tesla Model 3 in the United States. Indeed, underlining China’s aspirations is the agreement it recently signed with Glencore, the world’s biggest cobalt miner, which will provide it with more than 50,000 tonnes of cobalt over the next three years for its battery-materials production. The figure represents around a third of Glencore’s scheduled production during this period, as well as almost half of all the cobalt that was produced in the world last year. Much of this volume is likely to ultimately go to Chinese electric-car battery company CATL (Contemporary Amperex Technology Co. Limited), which is reportedly the largest battery supplier in the world, thanks largely to contracts it has in place with BMW and Volkswagen.

China is also planning on banning the production of vehicles powered only by fossil fuels, which in turn will push much of the country’s car demand towards EVs. Moreover, it has already launched a Five-Year Plan that involves pressing for up to 15 percent of power to come from non-fossil fuels. Again, this boosts the need for cobalt.

As demand for the metal soars—and as supply struggles to keep pace with consumption—a widening supply gap is expected to emerge. According to a cobalt-industry report from Research and Markets, “the global cobalt market will face a tight supply situation in 2017-2021, with the gap of 12,000 tonnes by 2021” (from an estimated 3,320 tonne gap in 2017), representing more than 10 percent of current supply levels. Should such a deficit materialise during the next few years, one can reasonably expect cobalt prices to continue their march towards the sky.

Japan Getaways: Luxury Travel on the Pearl of the Orient