Top Posts
Why Data Sharing and Technology Are Key to Tackling Illicit...
KBC Group: Behind the Success of Europe’s Top Bank-Insurer
Designing the Next-Generation Banking Treasury Management
Is the US Finally Warming to the Possibility of Creating...
Enabling the Drive Toward Green Finance with Technology
Why Have Tin Prices Struggled in 2022?
Home Brokerage Is Bitcoin Replacing Gold Demand?
Brokerage 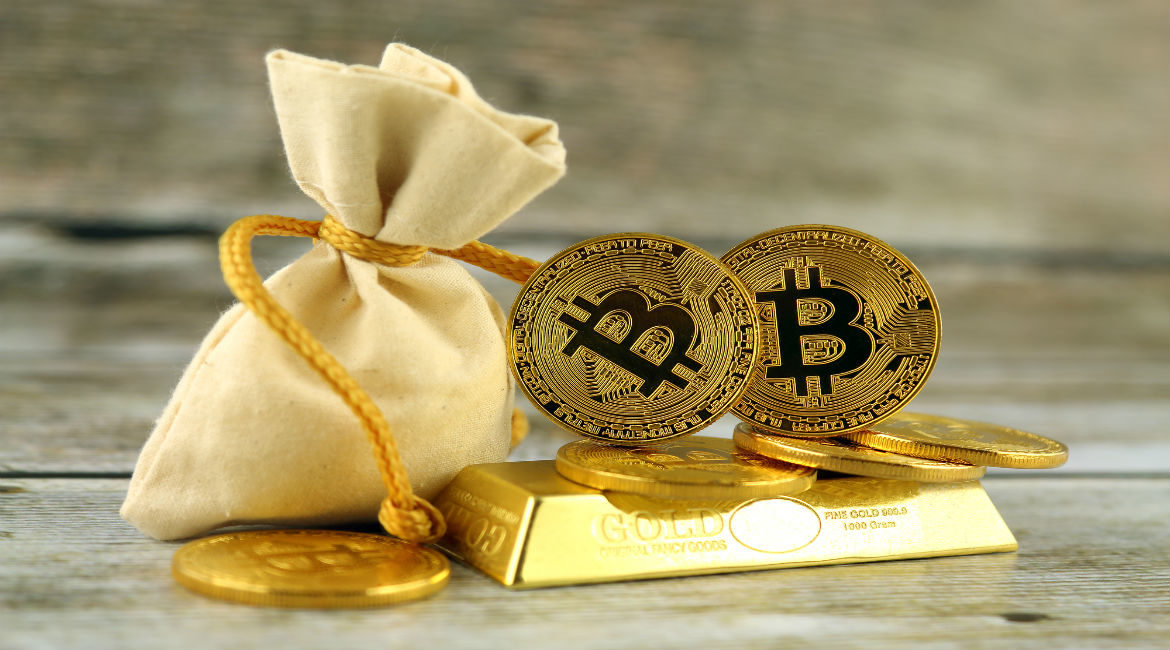 On November 21, Zimbabwe’s President Robert Mugabe resigned, ending his 37-year rule of the southern African nation. The resignation followed an intervention by the country’s military after Mugabe sacked his vice president, Emmerson Mnangagwa, earlier that month, and attempted to replace him with his wife, Grace Mugabe, which many saw as a ploy to eventually prepare her for the presidency. The move triggered a political crisis that the military managed to avert on November 14, before Mugabe was subsequently placed under house arrest.

According to the Zimbabwean exchange Golix, meanwhile, the price of bitcoin had surged to $13,500 in mid-November after the military’s intervention—almost double the price being traded on international markets. As such, the political crisis triggered a wave of buying across the country, with Golix recording more than $1 million worth of transactions during the previous 30 days—substantially more than the $100,000 that was recorded during 2016 in its entirety. Many see Zimbabwe’s recent surge in bitcoin demand as being demonstrative of the country’s citizens trying to protect themselves against the myriad of financial risks that have emerged, especially given that the country is experiencing a shortage of hard fiat currency.

Similarly, with hyperinflation spreading in Venezuela as a result of the South American nation’s own political crisis at present, the demand for cryptocurrencies has soared this year. A report by Bloomberg found that by June, Venezuela’s bitcoin-trading volume had jumped to $1.3 million, approximately twice as much as the amount only two months previously. And more recently, reports have emerged that amid the crisis, Venezuelans are increasingly capitalising on heavily subsidised electricity costs in the country to mine bitcoin—that is, the process of validating new transactions onto bitcoin’s public ledger (the blockchain), which is then rewarded with the receipt of newly minted digital currency. What these jumps in crisis-fuelled cryptocurrency demand seem to indicate, therefore, is that people seeking a safe haven for their money are increasingly turning to bitcoin. Not too long ago, however, it was gold that was the investor’s de facto safe-haven instrument. Even as recently as last year, gold was highly sought after in the wake of significant political uncertainty stemming from such events as Brexit, the Trump presidency and China’s stock-market crash earlier in the year. As such, a growing chorus of analysts are now suggesting that bitcoin’s safe-haven properties are eroding global demand for gold and other precious metals.

Indeed, that’s the opinion of Tom Lee, managing partner and head of research at Fundstrat Global Advisors. Lee has garnered much attention in recent months with his distinctly bullish forecasts for bitcoin over the coming years; and he believes that the world’s thirst for cryptocurrencies is growing at gold’s expense. “Cryptocurrencies are cannibalizing demand for gold,” Lee asserted back in July. “Bitcoin is arguably becoming a scarcer store of value. Investors need to identify strategies to leverage this potential rise in cryptocurrencies…. Our model shows gold’s value being relatively static against a rise in bitcoin.”

Comparing some of the statistics suggests that Lee may have a point, with recent figures revealing that gold demand has underperformed historical averages. According to the World Gold Council’s (WGC’s) industry benchmark publication “Gold Demand Trends”, the third quarter saw a 9 percent annual decline in gold demand from the same period in 2016; and while demand for gold-backed exchange-traded funds grew by 18.9 tonnes during the quarter, this paled in comparison to the 144.3 tonne inflow in 2016’s third quarter. Perhaps most telling is the fact that global demand is now at its lowest level since third-quarter 2009: 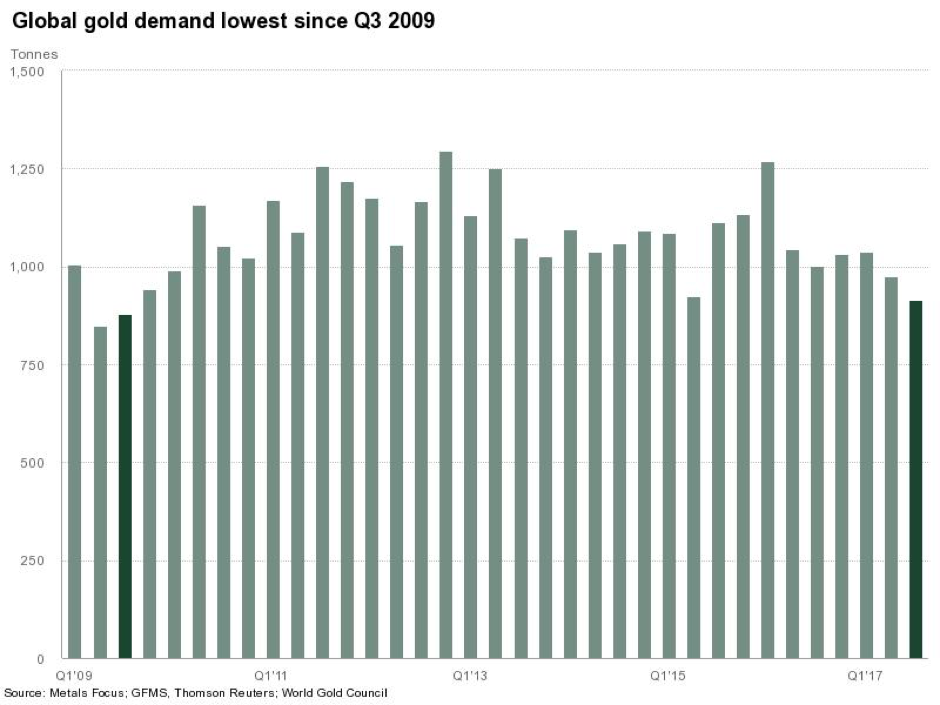 While a myriad of non-cryptocurrency related factors can explain this decline—indeed, the WGC highlights weak demand for jewellery as being a particularly prominent contributory factor—it certainly begs the question: Are investors adding bitcoin and other digital currencies to their portfolios in place of gold? There is some growing evidence to suggest so. A recent online survey of more than 2,000 young adults in the United States conducted by the Harris Poll on behalf of blockchain venture-capital firm Blockchain Capital found that 19 percent of Millennials (18-34 years old) would prefer to own bitcoin over gold. Additionally, 27 percent said they prefer bitcoin to stocks; 30 percent would choose bitcoin over government bonds; and 22 percent would choose bitcoin over real estate.

It is the similarities that gold and bitcoin possess that are leading analysts to infer a degree of substitutability between the two. For instance, both assets have a finite supply—there is only a fixed amount of gold that exists in the world, while there will only ever be a maximum of 21 million bitcoins in circulation. Both are “mined” in a manner of speaking—gold is extracted from the ground, and bitcoin using cryptography. And perhaps most significantly, they both function as stores of value because they remain independent from the influence of central banks, unlike fiat currency that can be printed as and when required. Ultimately, this means that neither gold nor bitcoin will lose their value should inflation begin to erode purchasing-power ability.

While there are some striking similarities between the two assets, however, there are also distinct differences. The most obvious is the fact that gold is a tangible commodity that exists in the real world; bitcoin is not—it is only a digital representation of value ownership. This makes transferring bitcoin between one party and another anywhere in the world significantly easier than transferring gold, which often requires additional delivery, storage and insurance fees.

During its nine or so years in existence, moreover, the price of bitcoin has proven to be significantly more volatile than that of gold, as well as almost every other traditional asset. Indeed, given its short history of erratic, violent price swings, it remains questionable whether bitcoin can truly be considered a “store of value”. As was recently noted by Goldman Sachs, gold “is clearly better at holding its purchasing power, and has much lower daily volatility”. The US bank also observed bitcoin’s volatility in 2017 to be a whopping seven times more than that of gold.

It is perhaps this issue of the degree to which investors perceive bitcoin as a safe haven that may well be a crucial long-term determinant of demand for both gold and bitcoin. As Fundstrat’s Tom Lee observed earlier this year, “Bitcoin supply will grow even slower than gold. Hence, the scarcity of bitcoin is becoming increasingly attractive relative to gold.” That said, gold has proven itself as a reliable store of value for millennia; its universal appeal means that it can be converted to cash anywhere in the world; and its value is not limited by the border of any one jurisdiction. Bitcoin, in contrast, has not even been around for 10 years. Clearly, digital currencies are still very much in their infancy, and only time will tell if their growth and popularity lead to mainstream acceptance. This infancy is also reflected in the relative size of each market—the WGC has put a value on all the gold that has ever been mined of $7.8 trillion, which is several orders of magnitude more than the $300 billion market capitalisation of all cryptocurrencies combined; while the market value of bitcoin alone is “just” $175 billion.

What’s more, with many analysts comparing the current cryptocurrency boom with the dotcom bubble of the late 1990s, there remains the risk of a major crash looming. The price of bitcoin has exploded over the last few years—2017 has seen barely believable gains in excess of 850 percent to date, on top of the 126 percent returns it enjoyed in 2016. Since mid-2016, however, the troy ounce value of gold has remained fairly rangebound, and is up by only 11 percent since the beginning of 2017. Clearly, bitcoin has been the more attractive asset over the last couple of years; but with many predicting a cryptocurrency bubble forming at some point in the future, a major crash is not out of the question. And while some projects may retain their value, it is difficult to know which ones will do so. There is no guarantee that bitcoin will be the one to survive in the long run, especially given the superiority of several other network protocols that can process transactions more quickly and at less cost than bitcoin. Gold, on the other hand, is not afflicted with the same concerns. Its proven track record over thousands of years means that investors know what they are getting with the yellow metal; and perhaps for that reason alone, it will always remain a more sure, dependable choice for safety within a portfolio.

ok but how bitcoin works under the hood? I’ve made some amout with BTCPeek but not sure what to do next…