Can Trump Save Coal? 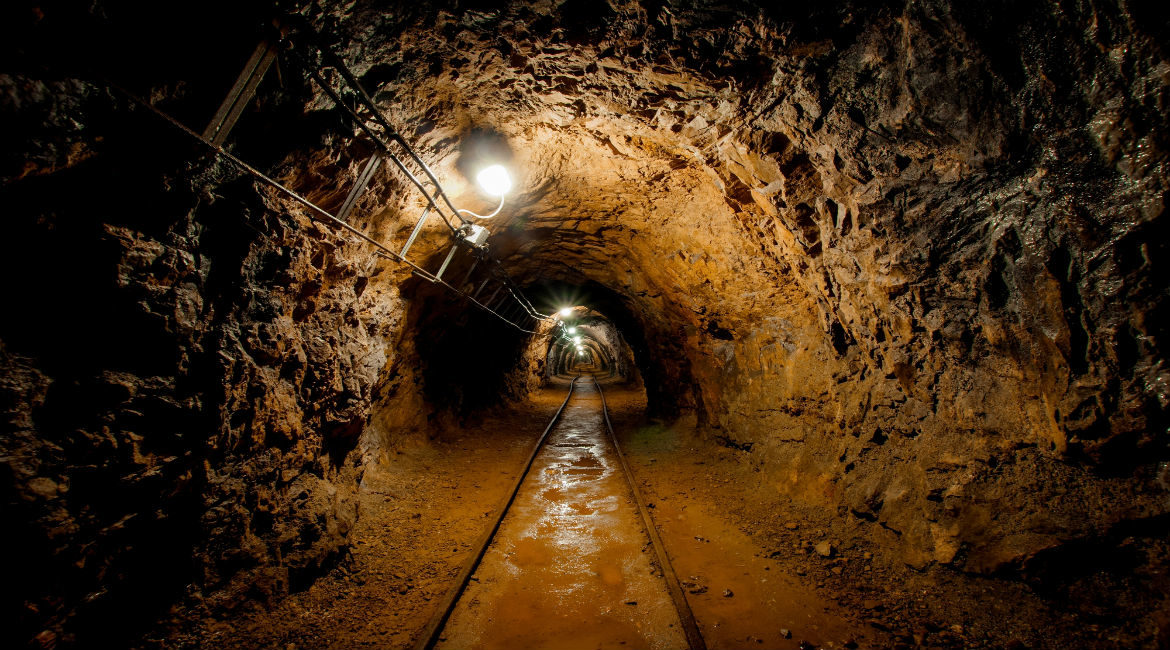 On March 28, US President Donald Trump signed an executive order that prompted much jubilation within the coal industry—and much dismay among environmentalists. “My administration is putting an end to the war on coal,” the US president announced, as he put pen to paper on the Energy Independence Executive Order. The order triggers the start of what is expected to be a long process during which the Clean Power Plan—a key climate-change achievement of the Obama Administration— will be effectively dismantled. He also intends to lift the moratorium on coal-mining leases on federal lands; approximately 40 percent of coal in the United States comes from federal coal reserves.

In sacrificing America’s leadership in the fight to prevent global warming, Trump has explicitly demonstrated that employment within his nation’s energy industry takes priority. In his own words, “A lot of people are going to be put back to work, a lot of coal miners are going back to work….The miners are coming back”. Indeed, it was the support of blue-collar workers such as coal miners that helped spur Trump to victory in November’s election.

The Clean Power Plan sought to implement a 32-percent reduction of CO2 emissions from power plants by 2030, from 2005 levels. Given that the burning of coal emits substantially more carbon than comparative energy sources such as natural gas, Obama’s signature climate policy largely took aim at coal-fired power plants. Hundreds of such plants would have ended up shutting down, while plans to construct new ones would have had to be cancelled. In response, Trump is now seeking to restore economic losses in the industry—losses that already run deep. By the start of 2016, US coal production had hit its lowest level since 1981, while the number of coal employees on record at the end of 2015 was the lowest since the US government began collecting data in 1978. By December, moreover, it was estimated that about 44 percent of US coal was being produced by companies that had declared bankruptcy at some point during the past four years. 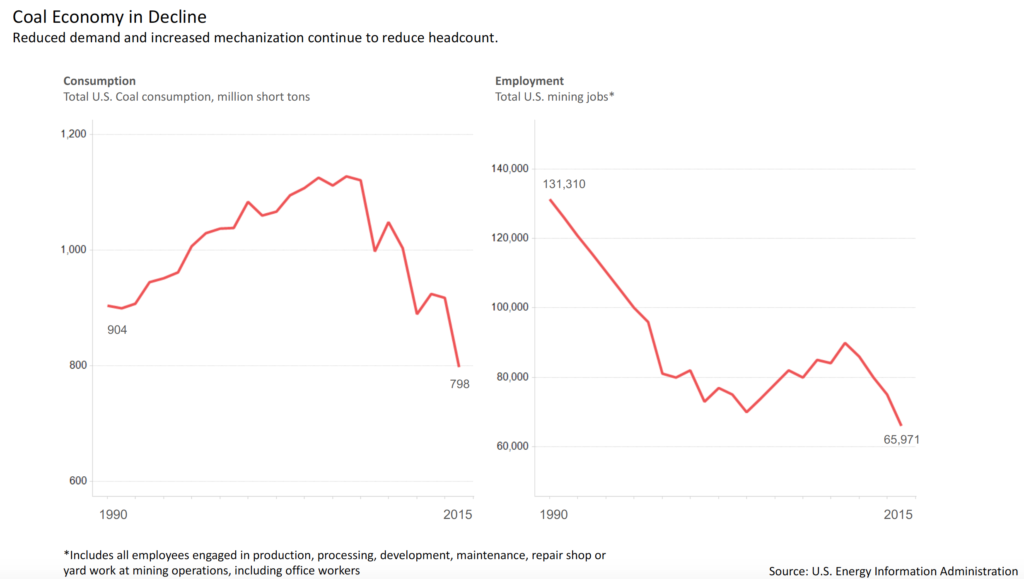 Despite the sweeping reforms being implemented by Trump, however, most seem to agree that coal’s ongoing decline has less to do with Obama-era regulations and a lot more to do with competition from natural gas and renewables. Indeed, given that the Clean Power Plan was only announced by Obama in 2015, its ostensible powers had little to do with coal’s long, sustained decline; instead, natural gas and renewable energy started to become a whole lot cheaper.

Throughout the 2010s, sizeable discoveries of shale-gas deposits in the US helped to substantially drive down natural-gas prices to the extent that they now easily undercut coal prices. Furthermore, new and considerably more cost-effective gas-extraction techniques, such as fracking and horizontal drilling, have allowed shale-gas producers to remain profitable in the face of those lower prices. 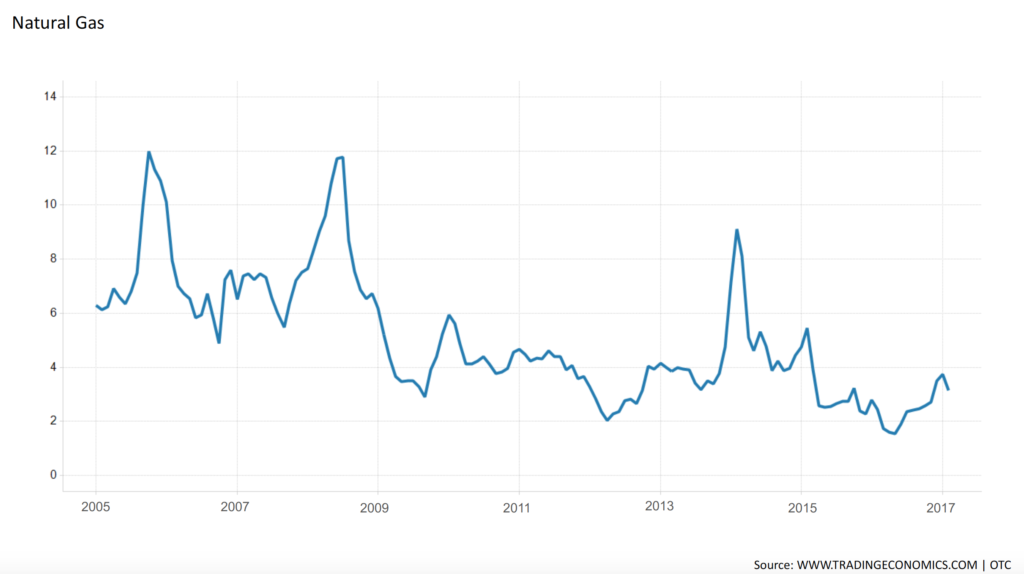 Renewables have also become cheaper. A report by the US Department of Energy recently found that a whole host of costs associated with clean energy are rapidly on the decline, including costs of land-based wind power, utility and distributed photovoltaic (PV) solar power, light-emitting diodes (LEDs), and electric vehicles (EVs). In total, such costs have fallen by between 41 and 94 percent since 2008. Perhaps most crucially, it was estimated that solar-plant installation costs declined by a hefty 75 percent between 2010 and 2016, while a report released last year by the Renewable Energy Policy Network, a UN-sponsored organisation, described renewables as being “cost competitive with fossil fuels in many markets”. Since 2000, moreover, the amount of global electricity produced by solar power is estimated to have doubled seven times over, while wind power has doubled four times over during the same period.

As such, utilities have increasingly turned towards the natural-gas and renewables industries—and away from coal—in order to fuel power generation. Ultimately, this has led to numerous mine closures for the US coal industry, and is expected to continue doing so during the coming years. Released earlier this year, the Sustainable Energy in America Factbook provides ample support for these shifting trends. Since 1990, more than 90 percent of cumulative generating-capacity additions have been for renewable energy and natural gas, while the last 10 years have seen 54 percent of total additions being dedicated solely to renewable-energy resources. During the same time, meanwhile, coal-fired power plants continue to be retired at a rapid pace. Between 2009 and 2016, coal’s contributory share as an energy source used in power generation in the US fell from 52 to 33 percent, while 2015 and 2016 saw 7 GW (gigawatts) and 15 GW of coal-based power respectively being disconnected. A further 12 GW is already slated for retirement during the next five years.

According to the US government-run Energy Information Administration (EIA), natural gas surpassed coal for the first time in 2016 as the primary energy source for electricity generation in the country. The agency’s most recent figures show natural gas accounting for 33.8 percent of power generation, while coal constituted 30.4 percent. Investment research firm Morningstar estimates that coal could account for as little as 20 percent of generation capacity by 2024. The EIA also shows coal continuing to constitute a smaller proportion of the US’s total energy consumption. Indeed, it was the only energy source to lose ground in 2016 from levels recorded in the previous year: 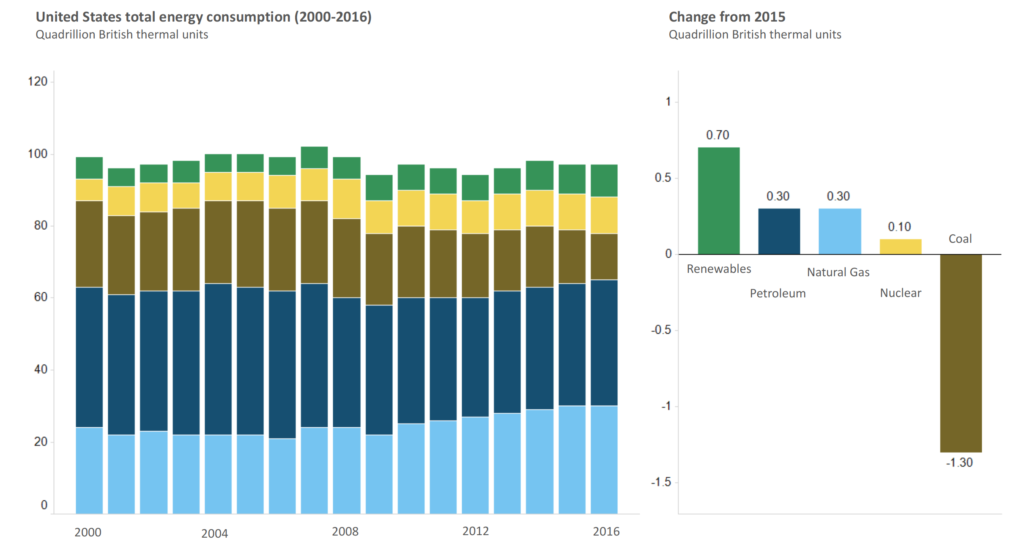 The deputy director of the Energy Institute at the University of Texas, Michael Webber, recently summarised the situation rather succinctly, “This executive order is not going to save coal because coal loses to cheap natural gas”. Indeed, Webber expects the only way for coal to end its terminal decline would be via market interventions that either made coal more attractive or natural gas less so. Such policies, however, would seemingly go against the common ethos of free markets. In particular, Environmental Protection Agency head Scott Pruitt has asserted recently that the power industry should not “pick winners and losers” but instead pick the most suitable fuel source on a case-by-case basis.

As such, it seems unlikely that political factors will derail Trump’s attempts to rejuvenate coal country. Economic factors seem far more compelling in dictating the country’s mounting preference for natural gas and renewable energy. The employment picture for renewable energy is also comprehensively brighter. Between 2010 and January 2017, the US Department of Energy calculated job growth in the US renewables industry from 175,000 to almost 800,000 workers, with 374,000 of those in solar and a further 102,000 in wind. What’s more, employment in solar and wind during 2016 is reported to have increased by 25 and 32 percent respectively. In contrast, coal miners are increasingly being replaced with machines and explosives, as well as engineers and data analysts. Mark Muro, senior fellow at the Brookings Institution’s Metropolitan Policy Program, believes that recent regulatory changes are “entirely outweighed by these technological changes, not to mention the price of natural gas or renewables”, adding that “even if you brought back demand for coal, you wouldn’t bring back the same number of workers”.

As far as the environmental impact of Trump’s order is concerned, the measures that are likely to be taken are expected to slow the speed of decline in greenhouse-gas emissions. However, the US now accounts for only 16 percent of the world’s total greenhouse emissions. China, on the other hand, makes up a massive 29 percent, and has made clear its continuing commitment to pursuing clean-energy solutions. In January, it announced an investment plan of $361 billion into renewable-power generation by 2020; by then it also expects installed renewable-power capacity—including wind, hydro, solar and nuclear power—to contribute about half of all new electricity generation in the country. Solar power is expected to receive approximately 1 trillion yuan of investment in order to boost total solar capacity in the country fivefold—the equivalent of around 1,000 new major solar-power plants. That’s in addition to the fact that China already owns five of the world’s six largest solar-module manufacturing firms, the largest wind-turbine manufacturer, the world’s largest lithium-ion manufacturer and the world’s largest electricity utility.

Whilst part of this new-found appreciation of clean energy can be attributed to China’s need to combat pollution in specific cities—not least in Beijing, where “red alerts” have had to be issued due to the growing smog and where the air-quality target this year remains over twice the World Health Organisation’s acceptable threshold—it also underlines China’s commitment to the climate-change targets that were put in place as part of the Paris Agreement in December 2015. China’s growing appetite for renewables, moreover, is also being supported by efforts to cure its addiction to coal. In November the government announced that it will be either delaying or removing altogether more than 150 GW of coal-fired power projects between 2016 and 2020, equivalent to around one-sixth of the country’s current coal capacity. This was then followed in January by the scrapping of more than 100 new coal-fired power plants with a combined installed capacity of over 100 GW.

With other major countries and regions are also keen to continue lowering their dependence on coal and increase their exposure to clean energy, such as India and the European Union, President Trump’s moves to renew the coal industry appear distinctly antiquated from a global perspective. Describing Trump’s recent order as “a disaster, not only for the US, but a global disaster”, Jean-Claude Juncker, the president of the European Commission, has been clear about advocating for the need to stick to the agreement reached in Paris.

With the Energy Independence Executive Order now signed, it is expected to take over one year of work in order to completely reverse the Clean Power Plan, and may take even longer should a stiff challenge by environmentalists be put forward in court. However, few expect coal to make a recovery. Perhaps the most damning indictment of the Energy Independence Executive Order is that even a few of the coal industry’s biggest names themselves don’t expect things to recover. The founder and CEO of the biggest US coal company, Robert Murray of Murray Energy, recently suggested that Trump “temper his expectations” and admitted that he will be unable to bring miners back to work. While the order may stymie the shuttering of coal-fired power plants in the short-term, therefore, the task of restoring the industry of the black diamond back to its glory days appears insurmountable.