Top Posts
Western Banks Willing to Accept the Short-Term Pain of Russian...
Why the US Is Ramping Up Its Presence in Somalia...
How Technology Is Helping to Solve Global Supply-Chain Issues
UK Inflation Climbs to Fresh 40-Year High
Extended Reality and the Metaverse Are Leading Financial Services into...
Digital Currency: India’s Move Towards a Digital Financial System
Home Brokerage Cognitive Bias Series: 4. Status Quo Bias
Brokerage 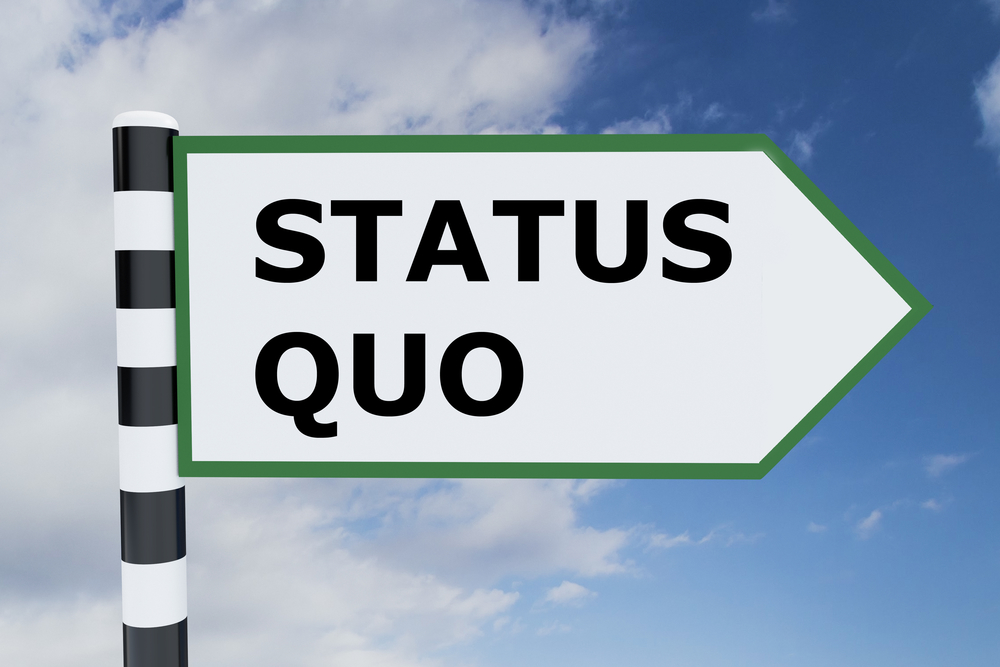 People have a strong tendency to “go with the flow” when faced with having to make a specific decision. It’s usually easier to follow the broad consensus—and a lot tougher to go against the grain. Indeed, standing out from the crowd can require a considerable amount of effort and independent thinking; it also requires us to supress our fears of the unknown. As such, when given the option of sticking with what we know or delving into a new, less familiar world, studies have shown that we largely opt for the former. This general human tendency towards inertia is called status quo bias. The term describes our preference for either doing nothing at all, or maintaining our current or previous mode of behaviour. As such, people prefer the current state of affairs, as well as being averse to doing anything that will change this state.

It is classed as an emotional bias. We tend to feel safer sticking to what we know rather than venturing into the unknown. Research has found humans to be loss averse on the whole, which implies that we tend to feel the pain of losing more than we enjoy the pleasure of winning. As a consequence, if the expected gain of taking an alternate decision is only marginally higher than its expected loss, it will not normally be enough to dissuade someone from the status quo position. Similarly, we also feel more regret from new actions that generate undesirable outcomes than we do when bad results happen as a consequence of inaction.

In one of this subject’s most influential studies, Samuelson and Zeckhauser (1988) devised a questionnaire in which subjects faced a series of hypothetical situations in which a final decision had to be made. Some of these scenarios, however, were presented to the participants framed with a pre-existing status quo position. When such a position was initially offered to them, it was revealed that the participants were more inclined to stick with the prevailing majority.

Several other studies have shown that the status quo bias can be particularly harmful in the investment world. Investors can suffer from the bias when they prefer to stick to their default modes of investing. Given the near-continuous changes in economic and financial conditions that are likely to affect financial markets, one could reasonably assume that the majority of investors would update their positions regularly. With professionals, this is generally the case—day traders, who in some instances hold trading positions for only a matter of minutes, will do their best to prevent status quo bias from afflicting their quick decision-making process. Less skilled investors, however, can be influenced by the bias because they think that a rising stock, for example, will keep going up, or that a bull market will continue with no end in sight. Of course, with such a market view, such investors are likely to be badly stung when that stock reverses course, or when that bull market turns bearish.

Indeed, the bias afflicts the entire spectrum of investing. A study by Mitchell, Mottola, Utkus and Yamaguchi (2006) looked at more than 1,500 company retirement plans for more than a million client accounts. The research found that the majority of such accounts exhibited significant status quo bias, in that the account holders did not execute any trades. Many investors, therefore, are happy to stick to a particular position, with those who adopt the “buy and hold” strategy often being exemplars of the bias in action.

The thought of making the objectively “right” investment can invariably be rather gruelling. Choosing from thousands of stocks, bonds, mutual funds and exchange-traded funds to assign to a portfolio is often an unnecessarily labyrinthine task; but status quo bias can, nevertheless, still be avoided. Narrowing the options of available investments is a crucial first step, as it will avoid the confusion of being presented with an excessive number of alternatives.

Rather than just succumbing to the forces of inertia, moreover, investors must have an active and disciplined investment strategy for portfolios. For example, one might require investing in a diverse array of asset classes, into which the investor may never have previously ventured. Rebalancing the portfolio periodically will also ensure that the investor can match asset allocation to his investment goals and risk preferences throughout the life of the portfolio.

In addition, behavioural psychologists point to the benefits of procrastination before making any major investment decisions. A study by psychologist Niels van de Ven of the Tilburg Institute for Behavioral Economics Research revealed that when being made to decide on something immediately, participants chose the status quo option 82 percent of the time; but when they were given some time to think about their options, the default position was chosen only 56 percent of the time. A delay, therefore, gives us time to objectively weigh our options, and ultimately means that we won’t feel as compelled to pick the “safe” option.