Top Posts
How Gamification is Catapulting Digital Banking to the Next Level
Challenges Remain, But There Are Opportunities to Be Had in...
Interview with Mr. Olukayode Pitan, Chief Executive Officer and Managing...
Commodities Outlook for 2023
The Value of Cash in a Time of Crisis: How...
The US-Africa Leaders Summit: Fostering a Closer Relationship with the...
Home Brokerage Corporate America Is Enjoying Record Amounts in Share Buybacks
Brokerage 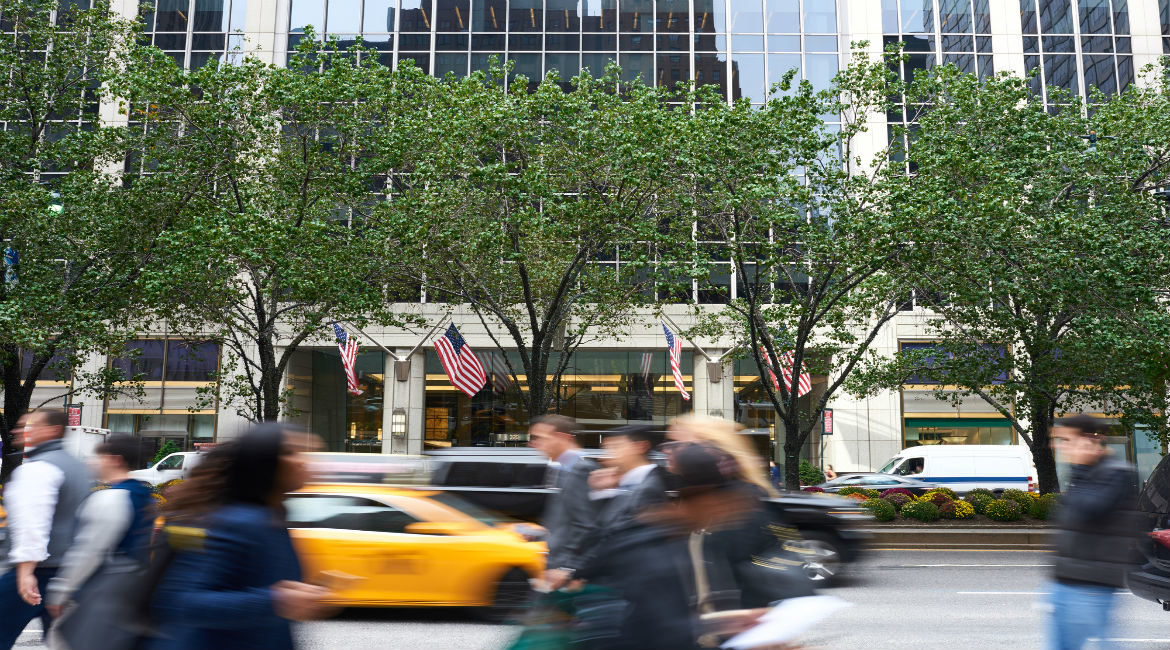 The Trump tax cuts are proving to be a boon for corporations in the United States, many of which have spent billions of the dollars they’ve accumulated in savings on buying up their own stock and rewarding shareholders and investors. The historic $1.5-trillion fiscal expansion slashed the nominal corporate tax rate most US companies pay from 35 percent to 21 percent, as well as introduced incentives to return profits that were stored offshore and gave breaks for companies investing in capital. As a result, the second quarter saw US companies smash all previous stock-buyback records.

According to research firm TrimTabs, nearly $437 billion in buyback plans were announced in the three-month period to June, thus easily eclipsing the previous record of $242 billion, which was set in the preceding quarter. In terms of specific companies, Apple alone announced $100 billion worth of buybacks in May, while major investment banks including Wells Fargo, JPMorgan Chase and Bank of America each announced at least $20 billion of their own stock soon being given a clean bill of health by the Federal Reserve System, which means that in total 19 financial-services companies contributed a combined $112 billion. Nike and Walgreens Boots Alliance also contributed substantially, announcing S15 billion and S10 billion respectively in buybacks in late June. And in stark contrast, TrimTabs noted the comparatively scant distribution of tax benefits to US employees, with the amount dedicated to buybacks in the second quarter being equivalent to funding “6.8 million $1,000 bonus cheques to workers every single trading day”.

The buybacks have fuelled a fierce debate over the effectiveness of the tax cuts, which were signed into law by the Trump Administration back in December. Prior to being approved, the Republicans’ justification of the tax cuts was that lowering the top corporate tax rate would trigger a flurry of investment by companies, which in turn would boost productivity and wages. The resultant productivity growth would then lead to higher economic growth, which would thus increase tax revenues that could be used to lower the budget deficit.

But it seems that such a scenario is unlikely to transpire. Flush with cash from the tax cuts, US firms have instead decided to use a substantial portion of that money to reward their shareholders. With data to July 23, analysis from JUST Capital, a company that “ranks companies on the issues that Americans care about most”, shows that of those companies from the Russell 1000 Index (which represents the top US companies by market capitalization) that have so far announced their intentions: 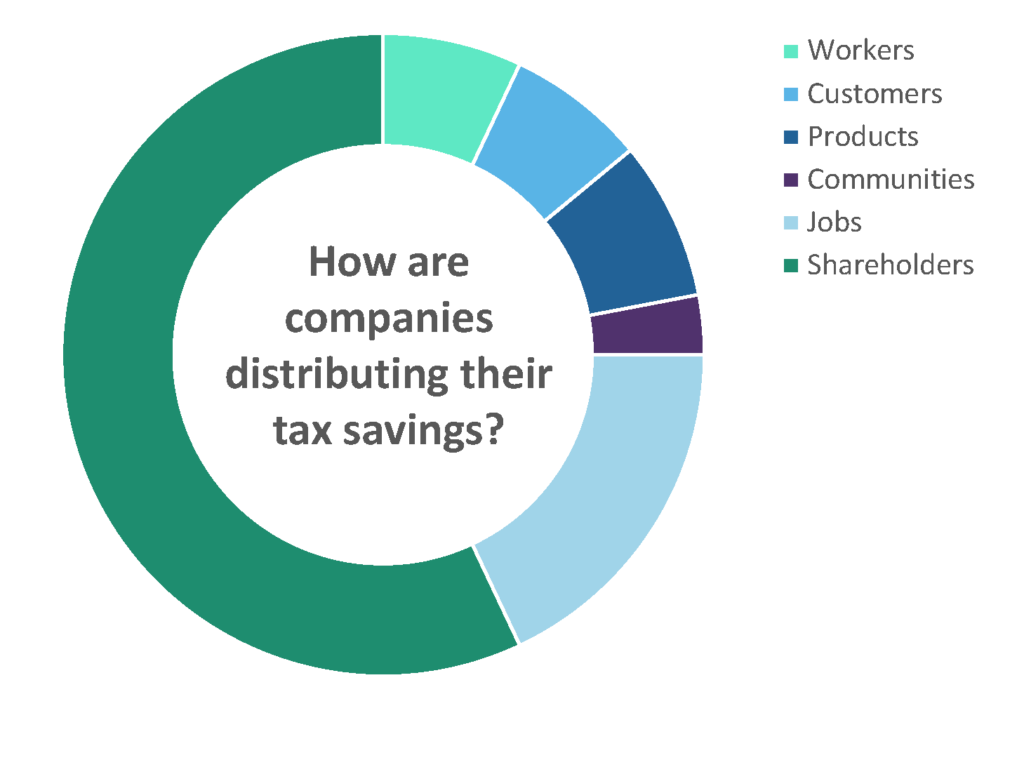 According to the Roosevelt Institute, the last 15 years have seen firms send 94 percent of corporate profits out to shareholders in the form of buybacks as well as dividends, “leaving companies to argue that there is little available for employee compensation or investment”. December’s Tax Cuts and Jobs Act, however, seems to have further accelerated this trend, with the first three months since the law’s enactment seeing stock buybacks doubling compared with the same period in 2017.

Buybacks take place when companies repurchase vast quantities of their own stock from the marketplace and return capital to their shareholders. By buying back a share of stock, the company reabsorbs that portion of its ownership that was distributed among other investors before. This reduces the number of shares on the market, which in turn means that shares are scarcer than was previously the case. As such, the reduction in supply boosts the share price, increases shareholder value and potentially creates tax beneficial opportunities. Firms also often use buybacks to prop up their stock prices, with corporate executives ultimately reaping considerable financial rewards. It is often considered an artificial method for raising a company’s share price, particularly as the value of the company has been bolstered without the company implementing any material changes to its business.

As such, many fear that stock buybacks are creating a “high profit, low wage economy”. Indeed, while employee wages moved virtually in concert with productivity in the US prior to the 1980s, they have been disconnected since then. This has led to wages becoming stagnant despite rising profits and productivity, which in turn has underpinned a significant worsening of inequality levels in the country.

Some estimates now suggest that S&P 500 Index companies are on track to repurchase a whopping $800 billion in stock this year, which would surpass 2007’s bumper year. And Goldman Sachs has projected the firms will return a staggering $1.2 trillion to shareholders via buybacks and dividends, which would represent a 23-percent increase in buybacks this year. With such colossal figures being forecast, concerns have been raised that by preferring to engage in buybacks, companies are continuing to neglect investment in their employees, or in other areas of productive capacity such as research and development, or in upgrading new facilities.

At the same time, the second quarter saw global net equity outflows at $20.2 billion, marking the worst quarterly performance since the third quarter of 2016, just before the presidential election. This suggests that companies buying back their own shares is one of the reasons that stock markets are managing to stay afloat. Analysts are pointing to buybacks and takeovers in particular as being disproportionately supportive of share prices, while record dividend flows are also helping to finance them and make deals look better than they are. As such, they are masking a solid outflow of funds from the equities space.

And buyback records may continue to be broken going forward. The recent emergence of a trade war could encourage firms to freeze the money that they had previously apportioned for capital expenditure, and instead shift it into stock buybacks, thus pushing up share repurchases to even higher levels. Indeed, recent Thomson Reuters data shows that capital investment by companies in the S&P 500 is expected to grow by 10.2 percent in the third quarter compared with the same period in 2017, which is a marked decline from the 18.8-percent growth recorded in the second quarter. And the fourth quarter is expected to see a mere 1.7-percent annual increase. The lack of certainty that pervades the market at present is prompting many to suggest that companies flush with cash from the tax cut will prefer to spend their bonanzas on either buybacks or acquisitions, both of which should boost their earnings per share.

Charting the Rise of Alternative Finance in the UK and Asia

Bridge over Troubled Water: Unease Amongst Allies and Trading Partners

Company is cutting bonuses for employees and Paid time off and vacation days already accrued. They are not passing on any money to anyone except the shareholders. Vile Company.