Top Posts
Challenges Remain, But There Are Opportunities to Be Had in...
Interview with Mr. Olukayode Pitan, Chief Executive Officer and Managing...
Commodities Outlook for 2023
The Value of Cash in a Time of Crisis: How...
The US-Africa Leaders Summit: Fostering a Closer Relationship with the...
Three Key Sectors in Which to Invest in 2023
Home Brokerage Double digit third quarter growth rockets Tyler Technologies stock
Brokerage

Tyler Technologies (NYSE:TYL) announced their third quarter earnings statement for the year 2013 on October 23rd. Tyler is a major information management solutions provider, their focus is on end-to-end IT services for local governments around the world. Forbes labeled Tyler as one of the America’s best small companies who has provider information management solutions to over eleven thousand local government offices in all 50 states. Tyler has a global footprint consisting of local governments in Canada, several of the Caribbean islands and the United Kingdom. 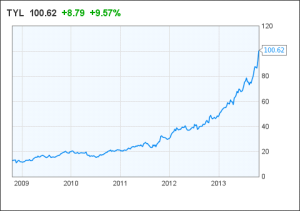 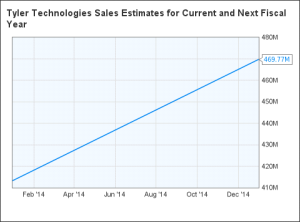 Taking the double digit growth in all the software related revenue streams in third quarter into consideration, president and chief executive officer (CEO) of Tyler Technologies, Mr. John S. Marr Jr. called the growth prospects “a solid one”. According to Mr Marr, company subscription revenues are the fastest growing segment as revenue growth was 34 per cent in third quarter from this stream. Tyler’s success in the subscription segment came by adding clients for their Software as a Service (SaaS) and e-filing offerings.

The market seems to have already priced in the latest double digit growth in Q3’13 as prices of Tyler’s stock is already up 9.57 per cent, just for October 24. However, delivering another growth year in 2014, to increase yearly revenue up to $ 469 million, will be difficult if the Federal Reserve stops the stimulus packages and curtail its open market bond buying operations by mid-2014. For value investors it is advisable to take caution regarding investing in a highly overbought company such as Tyler Technologies, at current price levels. As P/E ratio is nearing 90, this stock is currently marked for shorting by savvy investors.