Top Posts
Tesla Job Cuts Reflect Precarious Health of Global Economy
Artificial Intelligence is the Future of the Banking Industry —...
Why Taiwan is Pivotal in Ongoing Global Geopolitical Tussles
Is an Impending US Recession Now All but Guaranteed?
What is Driving Customer Centricity in Banking?
Near-80 Percent Inflation Exposes Turkey’s Grave Economic Mismanagement
Home Brokerage Are Frontier Markets Worth the Risk?
Brokerage

Are Frontier Markets Worth the Risk? 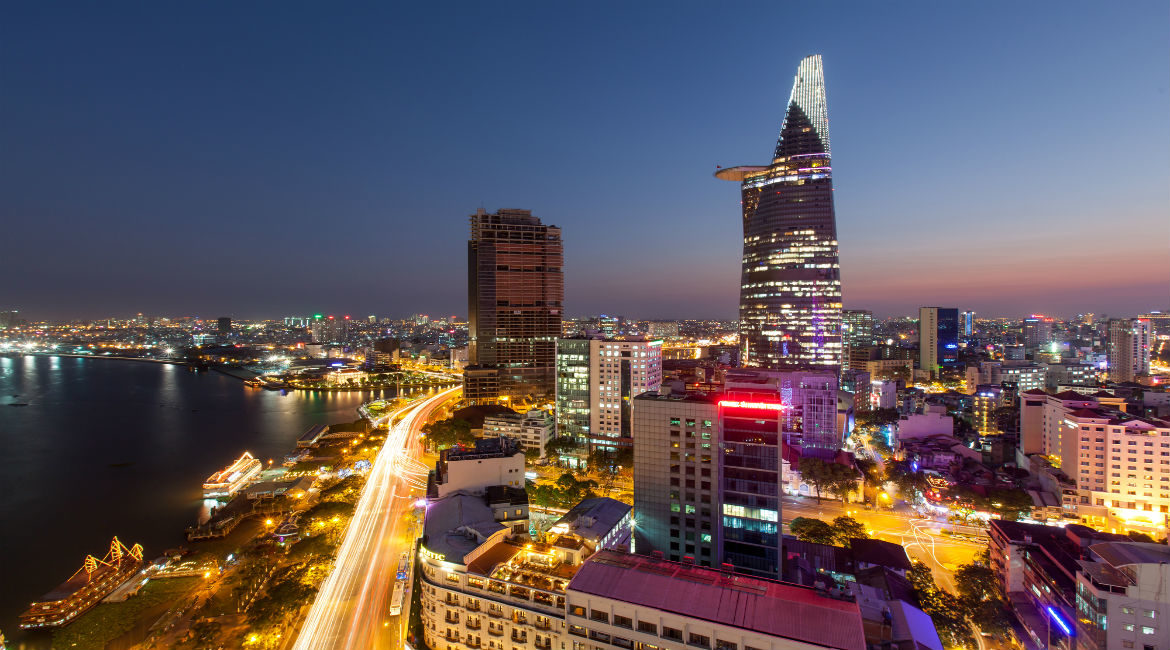 Investments in frontier markets are not for the faint-hearted. The stock markets in countries such as Vietnam, Bangladesh and Nigeria are highly volatile and illiquid. Political instability is common, and the number of companies in which investments can be made is restricted.

But these countries have large populations and tremendous potential for growth. A parallel can be drawn with the stock markets in the emerging markets of countries such as Brazil, Russia, India and China. According to investment research firm MSCI, emerging markets made up just 1 percent of global market capitalisation 30 years ago. Currently they account for 10 percent of the world’s stock-market value.

Analysts hold the view that frontier markets could follow a similar path in the following decades.

It is fairly certain that the economies of Argentina, Kuwait and Sri Lanka have a great deal of growth potential. But it is likely that their economies will expand at an erratic pace, and there could be long periods of stagnation. This is true of most countries that are classified as frontier markets by MSCI.

MSCI carries out regular reviews and changes the classification of countries when necessary. For example, Pakistan was part of the MSCI Emerging Markets Index in the period between 1994 and 2008. When the Pakistan Stock Exchange closed down in 2008, it was struck off the index. Subsequently the country was made part of the Frontier Markets Index in 2009. MSCI recently announced that it will reclassify Pakistan from its current status as a frontier market to an emerging market effective May 2017.

When buying stocks in companies located in these countries, fund managers concentrate on industries that benefit from growing urban populations. Companies that carry out infrastructure projects and those that provide consumer goods are likely to see the greatest interest. Firms providing financial services, cement manufacturers and mobile phone companies are other favourites.

As a general rule, these markets are highly illiquid. Accumulating shares in a particular company may take several months or even longer. Similarly, liquidating a portfolio may take time. Investors need to be patient and take these factors into account before committing themselves.

The corruption levels in frontier economies are much higher than in other markets. The average score of frontier markets on Transparency International’s corruption ranking is a low 4.2. Emerging markets have a score of 4.7, while for developed economies it is 7.6. Information about companies is often hard to come by. Data about insider trading is often patchy. These factors can often work as a major disadvantage for foreign investors.

While companies in these markets follow IFRS (International Financial Reporting Standards) international accounting standards, there could be issues in the interpretation of accounting rules between countries. Because of these factors, investing in frontier markets is not for everyone.

Since January, Vietnam’s benchmark VN Index has gained 25 percent, and analysts expect it to continue climbing. The government has plans to privatise a number of state-owned enterprises. The list of firms that will offer their shares for sale includes Vietnam Dairy Products JSC—popularly known as Vinamilk, the country’s largest company. Investors will also be able to buy into Saigon Beer Alcohol Beverage Corp (Sabeco) and Hanoi Beer Alcohol Beverage Corp. These divestments by the government are especially attractive because of a recent change in the stock-exchange listing rules.

According to the regulations that existed until November 2013, a company did not need to list its shares on an exchange after its initial public offering (IPO). Sabeco’s IPO took place in 2008, but the firm is still not listed. In November 2013, the rules were changed, and it became compulsory to list shares within 90 days of an IPO. The government has carried out a further amendment, and it is now necessary to list within seven days of an IPO.

According to a Bloomberg report, the State Capital Investment Corporation (SCIC) has plans to sell stakes in 120 government-owned companies this year. In the first nine months, it has already offloaded shares in 54 firms.

The VN Index is at an eight-year high, and the 12-month price-to-earnings ratio is at 14.2. Analysts are of the view that subsequent gains may be muted. 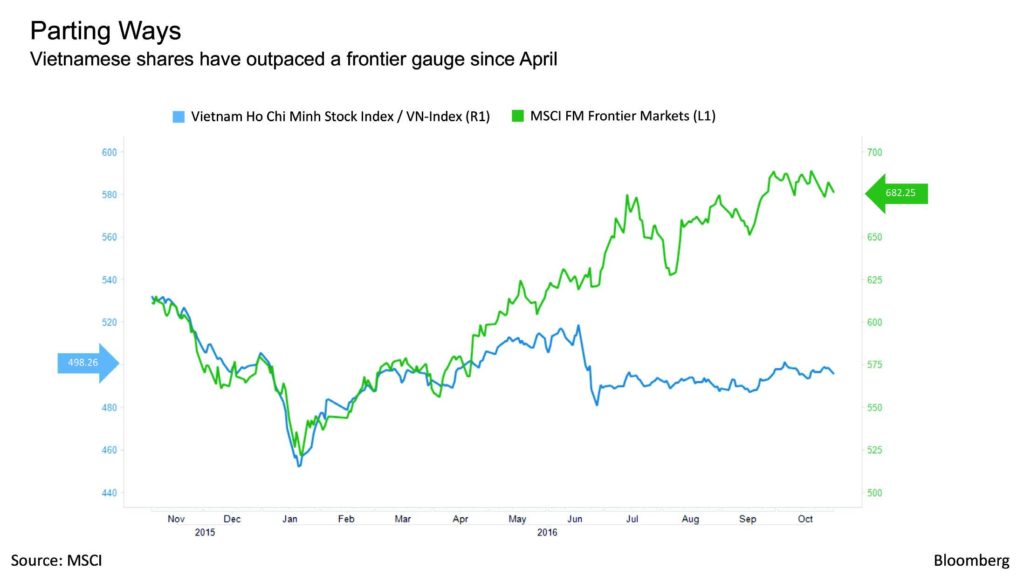 FTSE and MSCI, among others, have developed indices to track frontier markets. These indices track more than 5,000 stocks, but it is estimated that the number of companies in which it is possible to make investments is only about 500. 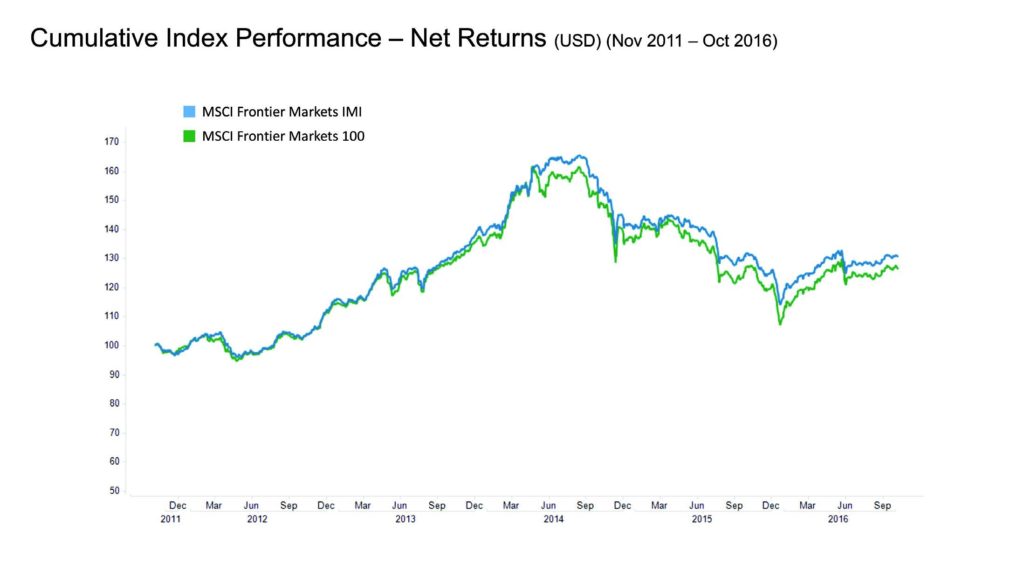 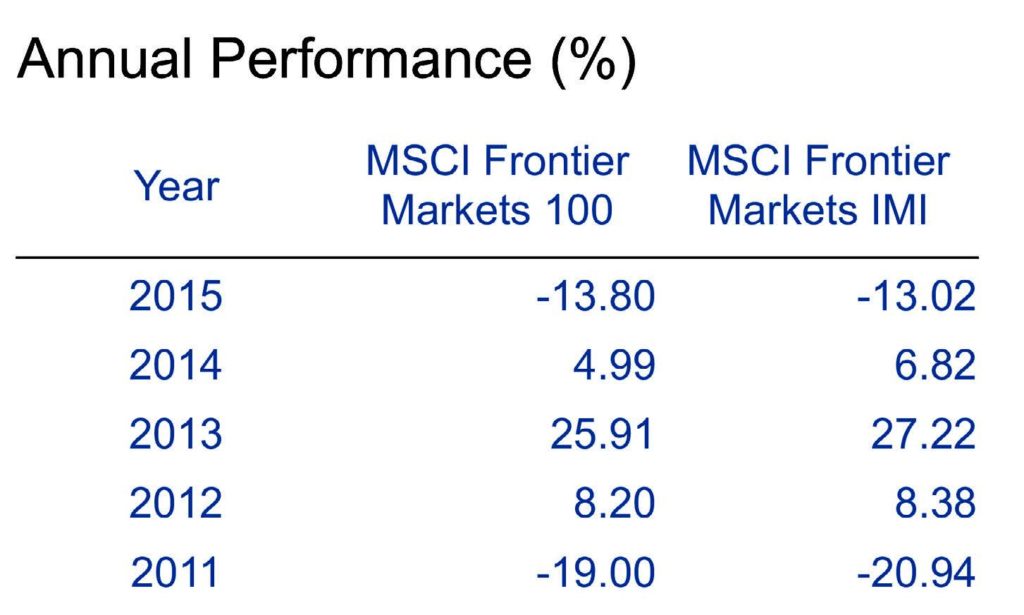 A former Soviet republic in Central Asia, Kazakhstan, is the size of Western Europe. It has the ninth largest proven oil reserve in the world. According to World Bank data for 2015, its hydrocarbon output accounts for 18 percent of its gross domestic product (GDP) and 60 percent of its exports. But the fall in oil prices had a great effect on the country’s economy and its currency. The tenge, which has had a floating rate of exchange since August 2015, has seen a steep depreciation. In November 2013, it traded at 120 tenge to the dollar. By January this year, the exchange rate had fallen to 386 tenge to the dollar. A dollar currently buys 338 tenge.

When allocating funds to frontier markets, investors have to be ready for extreme exchange-rate volatility as well as sharp falls in the value of their portfolios.

The term frontier markets was coined by the International Finance Corporation’s Farida Khambata in 1992. It refers to the smallest economies in the developing world. In 2015, these countries had 19 percent of the world’s population, 7 percent of its GDP but only 2 percent of global market capitalisation. As the regulatory institutions in these countries strengthen, their stock-market capitalisation is bound to grow.

Frontier markets offer the possibility of substantial capital appreciation. Investors will not get similar opportunities in developed markets or even in emerging economies. But it is equally likely that many of those putting money into frontier markets will see an erosion of their capital. The best approach for individuals and institutions with a high appetite for risk would be to allocate only a limited portion of their portfolios, say 5 to 10 percent, to these markets. It would also be necessary to keep a close watch on these investments and to be prepared to stay invested for an extended period.

Does the Rise of Fintechs Spell the Demise of Banks?