Top Posts
Banks Remain Uniquely Vulnerable to Sophisticated Cyber-Attacks
Western Banks Willing to Accept the Short-Term Pain of Russian...
Why the US Is Ramping Up Its Presence in Somalia...
How Technology Is Helping to Solve Global Supply-Chain Issues
UK Inflation Climbs to Fresh 40-Year High
Extended Reality and the Metaverse Are Leading Financial Services into...
Home Brokerage Green Bonds Are on the Rise
Brokerage 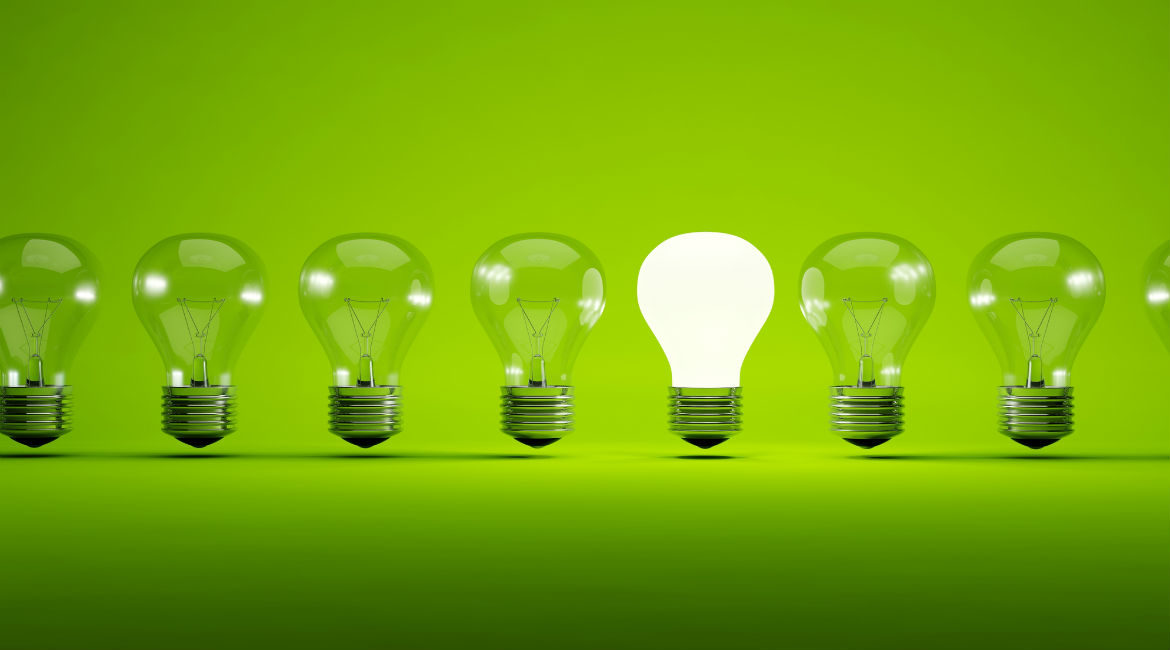 Among the most notable moves made by the Donald Trump Administration during his eventful first three months in office as US president has been to almost completely roll back the environmental regulations put in place by the Barack Obama Administration. Despite this opposition, however, there is one environmentally related financial sector that looks set to continue prospering for the foreseeable future. With much of the rest of the world now more solidly aligned on tackling climate change, a growing number of governments and institutions are discovering the potential of the green-bond market as a significant transformational force for achieving carbon-reducing goals. In the recent words of Beijia Ma, a Bank of America Merrill Lynch analyst involved with this new market, “No matter what the political environment might be in Washington, green bonds have a lot of momentum already built up at the local level”.

Green bonds are debt instruments that are issued in order to finance environmentally friendly projects, such as the development of renewable-energy technology, efficient infrastructure, cleaner forms of transport and climate-mitigation projects. A green bond is usually no different in structure than a plain vanilla bond, and thus is dependent on the creditworthiness of the bond issuer as opposed to the success of the project.

Green bonds have now been in existence for 10 years, with the European Investment Bank in Luxembourg having executed the first issues back in 2007. Although several factors are driving rapid growth in demand for green bonds today, the initial rise of the market is often attributed to the work carried out by the United Nations (UN) since the 1990s to combat the climate-change problem. The market began to gain traction by 2013, when corporate green bonds were issued by Electricité de France and Bank of America. The Paris Climate Change Conference that followed in late 2015—which resulted in nearly 200 countries coming together in an attempt to limit global warming to less than 2° Celsius—was effectively a culmination of the UN’s work, and is now providing fresh impetus for the world to explore the possible financial solutions available. Some now estimate that upwards of $100 trillion of investment will be required over the next 14 years if the agreement’s targets are to be met. With substantially more investment funds required to be generated, therefore, green bonds are now increasingly considered to be among the most useful instruments to help countries achieve those targets.

In 2016, the issuance of green bonds skyrocketed. According to Bloomberg New Energy Finance, the year saw the total global issuance of labelled green bonds—that is, green bonds that have been marked as such by the issuer—reach $95.1 billion. This was more than double the amount issued in 2015, and brings the total cumulative issuance since 2007 to over $215 billion. A further $19 billion has been issued during the first two months of 2017.

Rather than green bonds being solely issued by companies, moreover, entire countries are now getting in on the act. According to the Bank of America Merrill Lynch report “2017: enter the sovereign green giants”, sovereign issuances have been the biggest drivers of recent market growth, accounting for 48 percent of the current outstanding 2017 total and outperforming corporates (38 percent), supranationals, municipals and asset-backed securities. In December, Poland became the first country to issue a sovereign green bond; this was then swiftly followed one month later by the French government, which provided the largest issuance on record at $7.6 billion. Argentina also issued its first green bond in February, while Nigeria’s naira-denominated green bond is due to be launched soon, followed by Kenya. Indeed, sovereign issuances are expected to remain buoyant throughout the year, with governments from Morocco, Bangladesh and Sweden expected to launch their own bonds during the coming months; the Brazilian development bank BNDES recently announced a 500-million real ($159 million) sustainable-energy fund that intends to tap green finance later this year in order to grow the fund. Green bonds will also have the backing of some of the biggest names in Brazilian banking and finance, including BTG Pactual Group, Itaú Unibanco and UBS Brasil Banco de Investimento, which signed an agreement to develop the local green-bonds market in the country.

In terms of total issuances, China currently dominates the space, with last year seeing the country account for 36 percent of the global total: 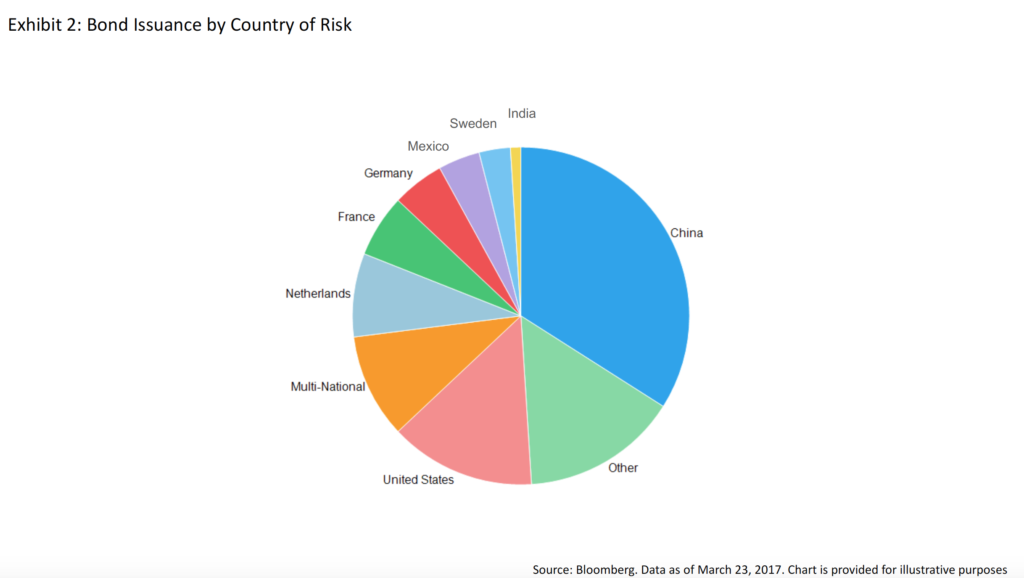 China was also the source of the world’s top three individual issuers: Shanghai Pudong Development Bank ($5.3 million), China Industrial Bank ($4.9 million) and Bank of Communications ($4.35 million). The United States, meanwhile, registered $15 billion of green-bond investment last year, which was 55 percent higher than the previous year. In terms of the types of green projects being financed by the bond issuances, 2016 saw 38 percent being devoted to energy-related initiatives, 18 percent to buildings and industry, 16 percent to transport, 14 percent to water, and the rest to adaptation, waste management and agriculture and forestry, according to the Climate Bonds Initiative.

Investors are also now beginning to see the potential benefits green bonds can offer from a risk-management perspective. Fixed-income portfolios in particular are being diversified with the addition of green bonds, as evidenced by none other than the world’s largest asset manager. BlackRock unveiled its Green Bond Index fund in late March, which intends to provide investors with exposure to fixed-income securities that have been issued in order to fund projects with explicit environmental benefits. According to the firm’s head of climate solutions, Ashley Schulten, the fund was conceived after BlackRock noted firmer interest in green bonds from their clients, who are now increasingly seeking to “participate in climate friendly and environmentally beneficial investments without making major changes to sector allocation or liquidity risk in their holdings”.

Benjamin Bailey, fixed-income portfolio manager at $3 billion US wealth-management firm Everence Financial, meanwhile, sees the green-bond market recently expanding to such an extent that environmentally friendly options are now extensively available across fixed-income segments. Bailey can attest to an impact-investing portfolio he co-manages, and which invests approximately one-quarter of its holdings in green- and sustainable-related bonds, up from 17 percent in previous years.

Problems first to be resolved.

That’s not to say that the green-bond market won’t face obstacles and challenges along the way. According to Martina Macpherson, global head of environmental, social and governance (ESG) indices and product management at S&P Dow Jones Indices, the pace of green-bond market development going forward will depend on several factors, including “policy and regulatory factors, market conditions and financing trends”. Macpherson also highlights a few specific potential roadblocks, such as “underdeveloped domestic bond markets, issuers’ views on costs versus benefits, a mismatch between projects, bonds, and institutional investors, and a lack of commonly accepted green standards and definitions”. The need for standardisation is echoed by Molly Betournay, analyst at investment advisor Pathstone Federal Street, which manages nearly $10 billion of assets. Betournay has observed that a lack of clear procedures in determining what can truly be considered “green” and what fails to meet the acceptable requirements remains a problem. Indeed, some dubiously labelled bonds are coming to market in the absence of sufficient regulatory scrutiny.

Implementing stricter regulations can help, as China seems to be proving. Research from Bank of America Merrill Lynch noted that China’s “remarkable rise” is “a clear illustration of the impact of supportive legislation”, after the People’s Bank of China published green-bond standards and quotas in December 2015. S&P (Standard & Poor’s) is also working on its own plans to allay many of the currency concerns associated with this new market. An evaluation tool is expected to be soon introduced that will contain a scoring system that not only labels a specific bond either green or not green, but will also ascertain a green bond’s transparency, governance and contribution to mitigation of or adaptation to climate change.

The abundant evidence of expanding interest in green bonds means that expectations are high for growth during the coming years. Moody’s sees the market surging to $206 billion in total issuance in 2017. 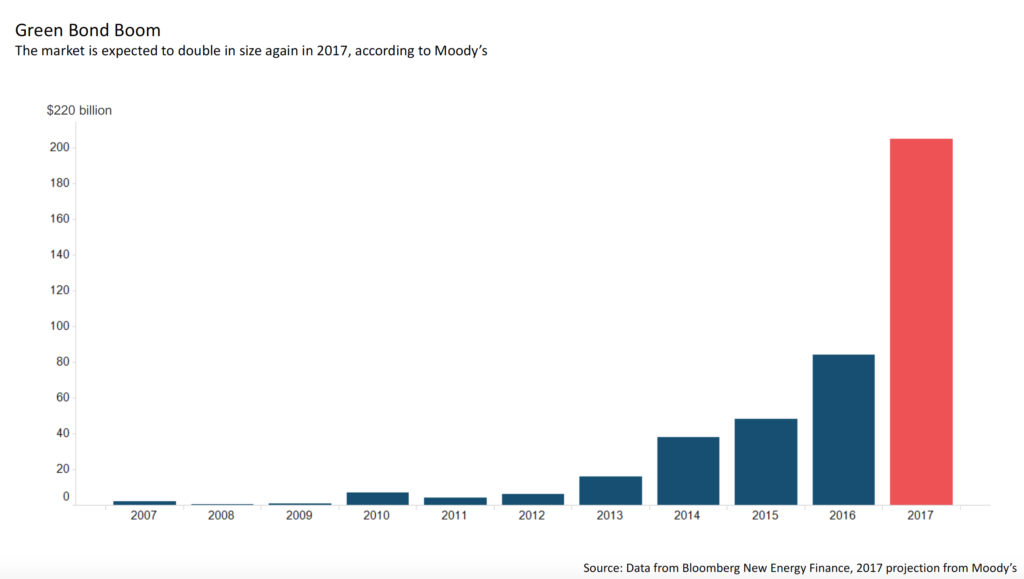 Bank of America Merrill Lynch, meanwhile, is also bullish, although not quite as optimistic, pegging growth at over 60 percent this year to hit $150 billion in a “bull case scenario”. The US lender also expects China to be the main driver, accounting for 30 to 50 percent of the expansion. The country’s strong desire to boost clean-energy use and cut down on fossil fuels (and therefore reduce pollution, which has reached critical levels in several cities, especially Beijing) seems likely to be positive for the green-bond market during the coming years, especially as the central bank has projected that 2 trillion to 4 trillion yuan ($289 billion to $579 billion) of annual investment is required to mitigate environmental issues and successfully combat climate change. With government funds expected to cover only about 15 percent of this requirement, China will need to tap the private-capital markets for the remainder, while the government also continues to explore the introduction of tax incentives on the bonds, as well as possibly using tax credits to cover the interest paid on green-bond debt.

At the most recent National People’s Congress, Chinese Premier Li Keqiang delivered a report in which the support of developing a green economy was listed as one of China’s economic and social-development targets. This also followed new guidance being established by the China Securities Regulatory Commission, stating that further measures will be taken to ensure China’s bond market supports those developing environmentally friendly projects by issuing corporate bonds and asset-backed securities. Liu Wei, a deputy director at the Shanghai Stock Exchange, also expects the exchange to launch corporate green-bonds trading “when conditions become mature”, and that it was currently “compiling a green corporate bond index for companies listed in Shanghai”.

It should be emphasised, however, that the green-bond market is still very much in its infancy at present. As recently asserted by Michael Sheren, an adviser to the Bank of England and co-chair of the Group of 20’s Green Finance Study Group, “There’s about $100 trillion of institutional money in the world, and less than 1 percent is invested in anything green”. Lack of liquidity still remains a challenge to overcome, and potential issuers may still be apprehensive about boosting the supply of green bonds, given the relative effort required to bring a green bond to market and the fact that traditional bond markets are significantly more liquid. Given the popularity among investors that has been observed to date, however, it seems only a matter of time before the green-bond market reaches a critical mass. As such, the market’s development appears unlikely to be hampered by the policies of the US administration.