Top Posts
How Gamification is Catapulting Digital Banking to the Next Level
Challenges Remain, But There Are Opportunities to Be Had in...
Interview with Mr. Olukayode Pitan, Chief Executive Officer and Managing...
Commodities Outlook for 2023
The Value of Cash in a Time of Crisis: How...
The US-Africa Leaders Summit: Fostering a Closer Relationship with the...
Home Brokerage ICOs and the Problem of Scams
Brokerage 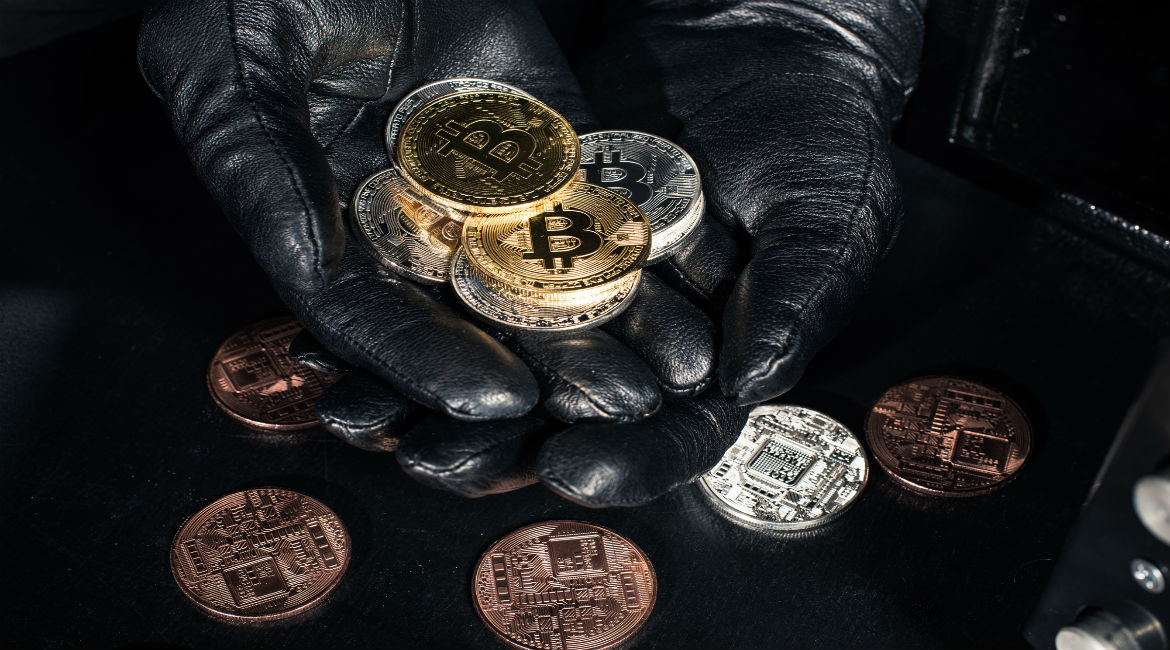 The last 18 months or so have seen initial coin offerings (ICOs) play a hugely disruptive role in the world of start-up financing. Companies the world over have managed to raise hundreds of millions of dollars—if not billions—to fund their blockchain-based development plans, often with the stated intention of transforming current business models, as well as potentially delivering highly lucrative returns for their investors. But the ICO craze has also raised much concern among the world’s leading regulatory bodies, not least due to the unabated rise of scam projects.

Earlier this year, ICO advisory firm Satis Group published a highly revealing study on this new fundraising mechanism. The research first identified those ICOs held in 2017 that had a minimum market capitalization of $50 million and the tokens of which were expected to eventually go into active trading. Of such projects, ICOs were then further divided into two categories: 1. “Failed to List”, which contained ICOs that were considered to be either (i) scams, (ii) had failed or (iii) had gone dead, and therefore they had all failed to list and trade at all; and 2. “Succeeded to List”, which consisted of those considered as either (i) dwindling, (ii) promising or (iii) successful, but with all three sub-groups going on to trade on cryptocurrency exchanges.

Astonishingly, Satis’ research found that almost 80 percent of last year’s ICOs turned out to be scams. A further 4 percent of projects had failed, 3 percent had gone dead and only 15 percent of the total had gone on to trade on an exchange. 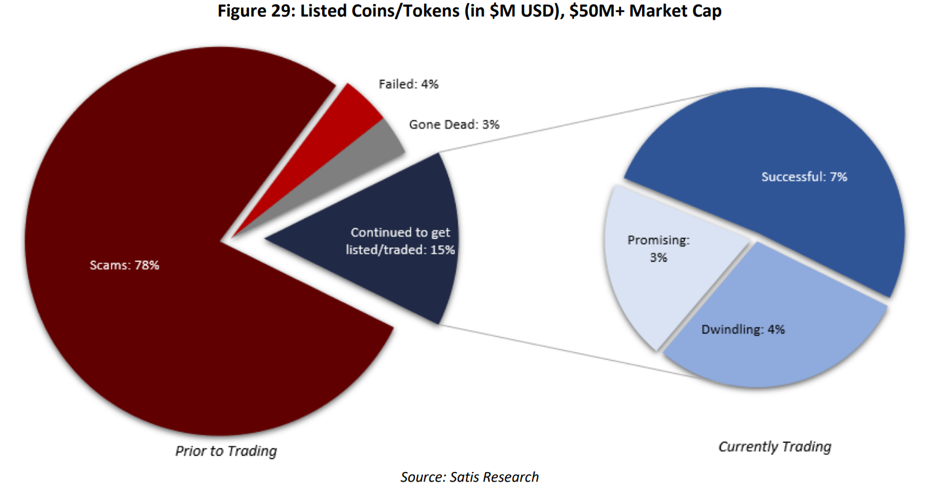 Clearly, such numbers are troubling for a whole host of parties, not least investors, regulators and start-ups seeking to legitimately conduct their own ICOs. And yet almost all signs point to further growth of investor interest in ICOs this year. According to popular cryptocurrency site CoinDesk, the number of token-sale events in 2018 has already passed the total number recorded for 2017; the $14 billion-plus raised this year to date is more than double that raised last year; and the average ICO this year has also raised nearly double the amount compared to last year—$31.08 million vs. $15.98 million.

The phenomenal global interest in blockchain technology—and cryptocurrencies in particular—has meant that investors have been only too willing to part with their cash in the hope of financing a potentially high-growth project. Having observed stratospheric gains being realised by the likes of bitcoin, ethereum and many other cryptocurrencies, the temptation to “get in on the ground floor” of what could be the next blockchain success story has been all too apparent. As such, many ICO projects that appear promising continue to receive injections from investors amounting to hundreds of millions of dollars. And in the case of the current record-holder—the Russia-based messaging-app provider Telegram—a staggering $1.7 billion was raised through a series of token sales.

But with regulation only very recently being stepped up by the likes of the U.S. Securities and Exchange Commission (SEC), the ICO space has also experienced the concurrent rise of scams. Indeed, it is the very lack of clear regulation to date that perhaps explains why the proliferation of scam projects has been so quick. As acknowledged recently by SEC Chairman Jay Clayton, “The rapid growth of the ICO market, and its widespread promotion as a new investment opportunity, has provided fertile ground for bad actors to take advantage of our Main Street investors.” The financial watchdog has, therefore, been keen to expedite the process of introducing formal regulation to the ICO space in recent months.

In particular, the SEC has moved to classify many tokens offered during ICOs as “securities”, such that the project is subject to federal securities laws and must be registered with the regulator prior to hosting the token-sale event. Security tokens are directly related to the growth of the issuing company, and are thus regarded as investment instruments that can deliver gains or losses to the investor. If the token is not classified as a security, it will most likely be considered a utility token, which means that its main function is for utilisation within the project, rather than for providing an investment opportunity.

The regulatory body is also taking more decisive action against potentially fraudulent ICOs with increasing frequency. PlexCorps, for example, raised more than $15 million through an ICO that promised 1,354 percent returns to investors in the space of just 29 days. In response, the SEC described PlexCorps owner Dominic Lacroix as a “recidivist Quebec securities law violator” and alleged that he had used secret accounts to hide the proceeds from the ICO. As such, the regulator has sued Lacroix for securities fraud and has also received a court order to freeze his assets. Further penalties, injunctions and a ban on offering digital securities are likely to be in the offing.

In addition to such action, the SEC advises on its website that while some ICOs may well be honest attempts at providing legitimate investment opportunities, many may be frauds “separating you from your hard-earned money with promises of guaranteed returns and future fortunes. They also present substantial risks for loss or manipulation, including through hacking, with little recourse for victims after-the-fact”. Investors are thus advised of the profound importance of conducting their own research and due diligence prior to making any financial commitment towards an ICO.

Indeed, it is this preliminary research that may well be the most crucial factor in preventing investors from losing their money. An increasing number of tools have emerged to help investors identify scams before they make the decision of whether or not to participate in an ICO, including web services that provide details about the project, the team and its history. ICO Alert, for example, provides a comprehensive list of upcoming ICOs, along with reports that provide insight into the legitimacy of a project. ICO Drops, meanwhile, addresses active, upcoming and completed ICOs and provides a rating system based on three criteria: Hype Level, Risk Level and ROI (return on investment) Level.

The SEC itself has also done much to raise investor awareness of the high-risk nature of ICOs. It has even created a website that depicts a mock ICO, designed to “educate investors about what to look for before they invest in a scam”. Called HoweyCoins, the spoof project purports to combine “blockchain and travel” to offer ICO investors “the magic of coin trading profits AND the excitement and guaranteed returns of the travel industry”. The website itself also features many of the most common signs that a project typically shows to indicate that it is, in fact, a scam-token offering, such as showing a countdown timer to the main sale event, the promise of partnering with blue-chip companies, a statement that the issuer will register with appropriate regulators and a promise of high returns for purchasing ICO tokens.

But while the SEC will continue to allow ICOs to take place—albeit under heavier regulation—other countries have taken different approaches. At the harsh end of the scale, China has decided to place an outright ban on ICOs altogether. While such a stance may well eliminate ICO scams being perpetrated in the country and protect investors, it does little to prevent the development of what could be a revolutionary new method of capital-raising for start-up companies. At the opposite, liberal end of the scale is Switzerland, in which the virtual-currency hub “Crypto Valley” is providing a relatively open environment for ICOs to flourish. Indeed, 2017 saw ICOs based in the country raise about 14 percent of the global total for the year.

At this stage, there does not appear to be much harmony between jurisdictions with regards to ICO regulation; nevertheless, more investor protections are being continuously implemented, which in time should be sufficiently harsh enough to disincentivise scams from being created. The balance most countries seemingly need to address is to ensure that such rules don’t prevent legitimate projects from being able to access capital from investors in the innovative, direct manner that ICOs have enabled thus far. But given the alarming rate at which scam projects continue to steal from investors, achieving that balance remains elusive.