Top Posts
Challenges Remain, But There Are Opportunities to Be Had in...
Interview with Mr. Olukayode Pitan, Chief Executive Officer and Managing...
Commodities Outlook for 2023
The Value of Cash in a Time of Crisis: How...
The US-Africa Leaders Summit: Fostering a Closer Relationship with the...
Three Key Sectors in Which to Invest in 2023
Home Brokerage Iron-Ore Prices Hit Five-Year Highs: What’s Behind the Rally?
Brokerage 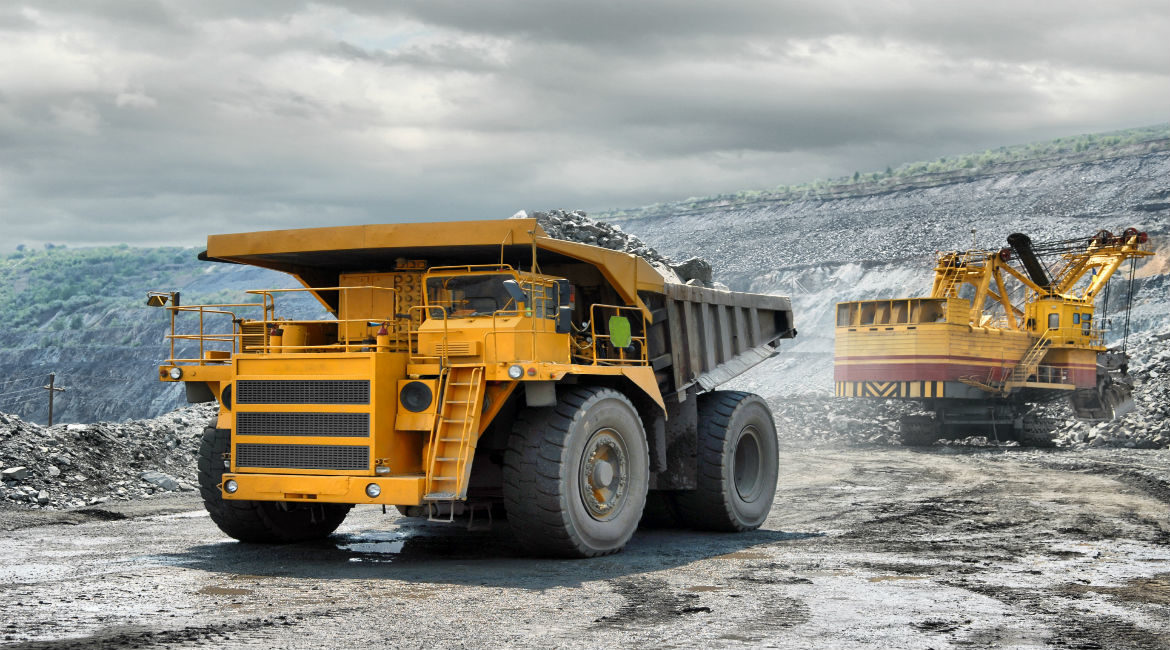 Few commodities have enjoyed as spectacular a price boom this year as iron ore has. By early July, the price of this steelmaking raw material topped $120 per tonne for the first time since 2014—the culmination of an explosive rally that began early this year and that has shown little sign of abating since then. 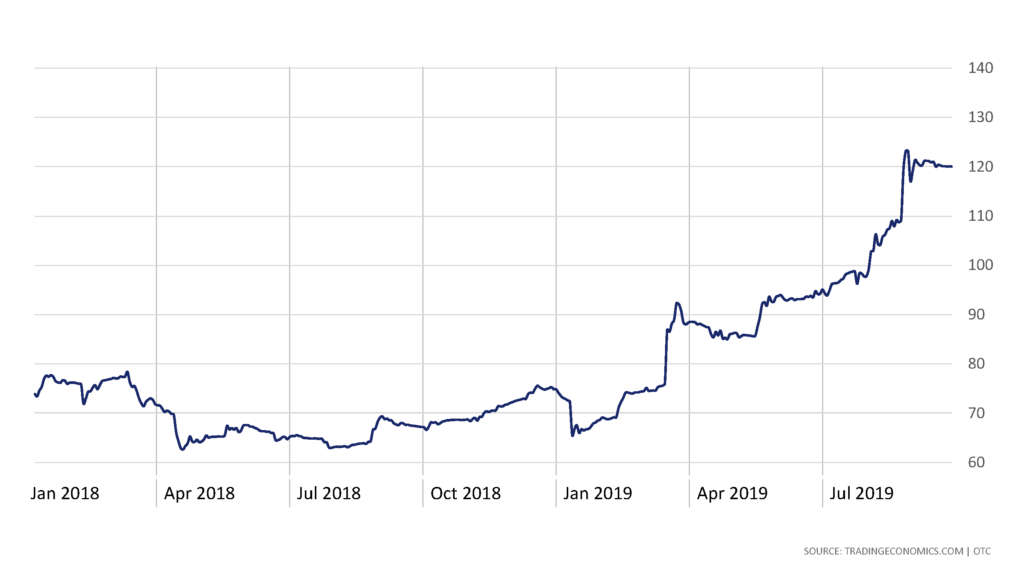 Iron ore is among the world’s most crucially important commodities, especially given its widespread use as steel’s main ingredient. Currently, the world produces around 1.7 billion tonnes of steel, a process that requires about 2 billion tonnes of iron ore as well as lesser amounts of recycled steel and metallurgical coal.

But an emerging global supply deficit this year has sent prices soaring at breakneck speed, as constrained supply has run up against strengthening demand to whip up a powerful bull market. Perhaps more than any other supply-related factor is the production shock that triggered the rally in the first place back in late January when a tailings dam collapsed at the Córrego do Feijão mining complex in the Brazilian state of Minas Gerais. The dam belonged to Vale, the world’s largest iron-ore mining company.

The disaster not only caused extensive loss of life with more than 240 reported deaths, but it also severely constrained Vale’s iron-ore supply slated for seaborne markets. With authorities ordering a halt in production across many of Vale’s Brazil mines—including at Brucutu, the largest in the Minas Gerais state—output capacity totalling nearly one-quarter of the mining company’s initial 2019 production target of 400 million tonnes was taken offline (an amount equivalent to around 6 percent of the entire annual global seaborne iron-ore market). By February, Vale had declared force majeure on the sales contracts of several iron-ore qualities, while volatile weather conditions in the north of Brazil also had an adverse impact on the mining company’s iron-ore operations. By the second quarter, Vale’s production levels were a hefty 34 percent lower vis-à-vis second-quarter 2018 levels. It has also posted two consecutive quarters of losses this year, with a $133-million loss for the second quarter (against a $76-million gain in net income recorded for the same quarter in 2018), adding to the whopping $1.6-billion loss Vale notched up in the first quarter.

Global supply was then further debilitated by Cyclone Veronica, which having pummelled Western Australia’s Pilbara Coast in March forced major local iron-ore mines to shut down production. As a result, prices sailed past the $100-per-tonne mark, before being driven even further skywards during the second quarter after Rio Tinto reported dramatic declines in output. The Australian mining giant’s iron-ore production dropped by 7 percent, to 80 million tonnes, during the second quarter compared to the previous year, as bad weather and operational challenges at their mines continued to weigh heavily on capacity. Rio Tinto also slashed its forecast for 2019 shipments. Fellow mining major BHP, meanwhile, also saw annual output for fiscal 2019 decline by 2 percent to 269.6 million tonnes, again partly stemming from the devastating impacts of Australia’s tropical cyclones.

Bullish demand-side factors have also played their part in boosting iron-ore prices this year, not the least in China, where crude-steel production has been hitting new all-time highs on the back of a booming property sector induced by Beijing’s recent stimulus package. The first five months of 2019 saw China produce 10 percent more steel than it did during the same five-month period of the previous year, with new construction starts improving by 15.5 percent in April and 13.1 percent for the January-April period.

Given the hugely consequential supply problems in Brazil and Australia, moreover, China has struggled to buy iron ore from the global market as easily as has normally been the case. The two countries represent China’s largest iron-ore suppliers, but the world’s top iron-ore consumer has seen its imports of iron ore fall throughout most of 2019 as shipments from both countries fell. Data from China’s General Administration of Customs shows that imports declined in June to 75.18 million tonnes, the lowest level since February 2016 and almost 11 percent lower than June 2018 levels. China has, therefore, tapped its own stockpiles of the commodity to satiate demand from its rampant steel sector. At 115 million tonnes at the end of June, port stockpiles fell to their lowest level in more than two years and were 18 percent lower than 12 months prior. It also meant that only four weeks of inventory supply were on hand for steel producers. Vivek Dhar, mining and energy commodities strategist at Commonwealth Bank, noted that this decline has been a major reason for the uptick in iron-ore prices. “China’s port stocks are an important indicator of surplus and deficit concerns in iron ore markets.”

Encouragingly for the bulls, it would seem that the rally may not have run out of steam just yet. Many analysts continue to forecast further upside potential for thesteel-making material. S&P Global Market Intelligence, for example, calculates that a 54-million-tonne deficit will transpire for the global seaborne iron-ore market this year and estimates that it could take another three years before the market returns to a state of balance between production and consumption. S&P chiefly holds the Australian and Brazilian supply disruption responsible for this deficit. “We have increased our price expectations on increased supply disruptions, though we hold our estimates for steel demand broadly consistent given policy uncertainty and a long-held assumption of steelmaking capacity curbs in China over some of the second half of the year,” acknowledged Maximilian Court, S&P’s senior research analyst for metals and mining.

JPMorgan also recently forecast a major iron-ore deficit materialising this year, with demand outpacing supply by 100 million tonnes, while the global head of mining at UBS, Glyn Lawcock, expects prices to soon hit $140 per tonne. Singapore iron-ore data analytics firm Tivlon Technologies predicts even greater price gains, with $150 to be reached by October. “We expect the launch of infrastructure projects in China to peak in the third quarter and further uplift demand for steel,” the company recently stated.

And although China may have played a crucial role in this year’s rally, it would appear that not everyone in the country is particularly happy with having to accommodate for such an increase in the iron-ore price. Steelmakers, in particular, are feeling the pain of having to pay exorbitant prices for the raw material and have even lobbied the government to intervene in the market. According to Qu Xiuli, the deputy chair of China’s Iron and Steel Association (CISA), the concurrent rise in iron-ore prices and decline in steel prices have meant that “the level of steel company profits has continuously declined and become hard for companies to digest”. But whether China can influence iron ore’s upward march seems unlikely, at least according to Credit Suisse. The bank’s analyst Matt Hope recently stated that while the Chinese steel mills may well be wishing for a “reasonable” price, “they can’t wish away the supply shortage arising from mine woes in Brazil and [Western Australia], and China’s demand for prompt cargoes is growing as booming steel production chews through China’s tradeable port stocks”.

But not everyone predicts that the rally will continue for much longer. Leading commodities intelligence firm CRU Group observes that prices have become disconnected from underlying market fundamentals, with senior analyst Erik Hedborg specifically citing both improving global supply in recent weeks alongside renewed expectations that mainland steel consumption may soften. Other than ongoing challenges at Rio Tinto, therefore, Hedborg sees the market as being adequately supplied and is also bearish on Chinese steel demand for the second half of the year. The CRU analyst in Beijing, Richard Lu, however, does not see the global supply picture picking up anytime soon. Lu sees the iron-ore supply remaining subdued for some time, as some miners “have scheduled maintenance in the coming months, while output from Vale is not likely to pick up largely in the near term”.

Goldman Sachs also sees iron-ore prices being scaled back modestly in the near future, with the US banking giant forecasting a year-end price of $90 per tonne. “Going forward, we expect demand to soften while supply to partially recover. The $100 a tonne iron price, while justified for May and June, also reflects a market that is at peak tightness,” Goldman observed, on the basis of China’s government being likely to begin slowing down housing starts on a gradual basis in an attempt to maintain growth stability.

And although Vale is not expected to return to full operating capacity before 2022, Brazil’s iron-ore supply is back on the rise, with July’s iron-ore exports rising by 16.6 percent from June levels, thus marking the highest monthly export levels seen in nine months. Vale also expects that this ongoing rebound in exports, alongside higher prices, should facilitate recovery in its earnings for the third quarter. With the company’s Brucutu mine now back to operating at full capacity once again, around 30 million tonnes of annual production has been restored. And having confirmed that it expects iron-ore sales volumes for 2019 to be in the range of 307 million tonnes and 332 million tonnes, even if the miner misses its targets for this year, it means that at least sales are unlikely to drastically differ from—and may even outperform—last year’s total of 309 million tonnes.

Destination Graduation: Secured Credit-Card Graduations Are on the Rise

Are You Working for a Bank? Seriously?

Comments about mine sites scheduling maintenance as a reason for lost production seems odd. All mine sites have regular shutdowns for maintenance. Typically every 13 to 15 weeks. In Western Australia there are dozens of mine sites / partial sites. BHP, Rio Tinto, FMG and the smaller players are all professionally run operations. And have been for some time. It would take more than maintainence to slow production.

Why is it that in my country, Sierra Leone. At any time there is no major mining activities in my country that the time the price of the Ore get above $100 per ton? I hope it continues till we get sober investor’s to take over our mine sites.