Top Posts
Challenges Remain, But There Are Opportunities to Be Had in...
Interview with Mr. Olukayode Pitan, Chief Executive Officer and Managing...
Commodities Outlook for 2023
The Value of Cash in a Time of Crisis: How...
The US-Africa Leaders Summit: Fostering a Closer Relationship with the...
Three Key Sectors in Which to Invest in 2023
Home Brokerage Is a Bubble Forming in Tech Stocks?
Brokerage

Is a Bubble Forming in Tech Stocks? 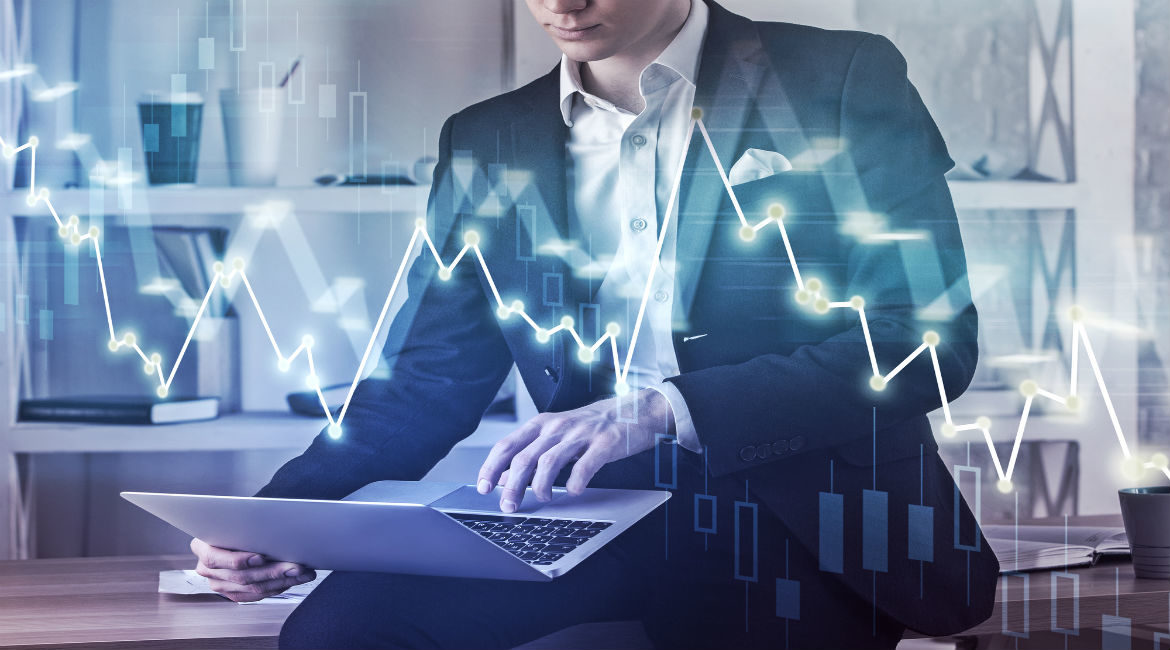 In June, Goldman Sachs issued a stark warning that technology stocks were overvalued. According to the bank’s chief US equity strategist, David Kostin, the valuation premium for growth among tech stocks has eclipsed historic highs. With the double impact of excessive valuation and the likelihood of a coming regulatory burden proving hazardous to the sector, therefore, Goldman recommends that investors should write off such stocks, especially in the software sector that now carries “the highest multiples” since the dot-com bubble.

As a reminder, a bubble describes a rapid and unsustainable rise in stock prices, at least in part driven by speculative interest. And despite increasingly unfavourable valuation metrics, investors continue to enter the market in the hope of capitalising on what is seemingly a rare market opportunity. As such, rising speculation creates vastly overvalued stocks, which in turn causes prices to become increasingly disconnected from the underlying fundamentals. This leads to a bubble forming, one which invariably bursts once investors realise that the performance of their investments is unlikely to meet future expectations. They then sell en masse, triggering a violent market crash or inducing a steady deflation back to levels approximately reflective of the fundamentals.

The dot-com bubble was characterised by an unprecedented rise in the valuations of largely internet-based technology companies during the bull market of the late 1990s. With tech-stock prices skyrocketing to new highs on speculative interest and obscene amounts of venture-capital funding being committed to new start-ups, the Nasdaq 100 surged to the heavens. Between 1995 and 2000, the benchmark index comprising the biggest tech stocks of the United States rose by more than 400 percent. But the bubble eventually burst in early 2000 after many companies failed to get off the ground, let alone generate a profit.

But can we compare the current tech-stock boom to those heady days of the late 1990s and early 2000s? Is a disastrous bubble of similar magnitude now brewing? Some believe so.

Of course, we witnessed one technology sub-sector’s bubble burst in spectacular fashion not too long ago. The price of bitcoin soared from $2 in December 2011 to $20,000 by late 2017 as the excitement over blockchain technology from investors, start-ups and venture capitalists all reached fever pitch. But this peak was short-lived, as the famed cryptocurrency lost one-third of its value in just 24 hours on December 22, before seeing another 50-percent plunge by February 2018.

And now some believe that a similar fate could lie in store for tech stocks in general. Perhaps not quite as volatile as that of bitcoin, but some analysts are drawing parallels between the current tech growth spurt and the dot-com bubble. It’s certainly no secret that technology has been the standout performer in US equities for many years now, with the sector having repeatedly driven markets to new record highs. 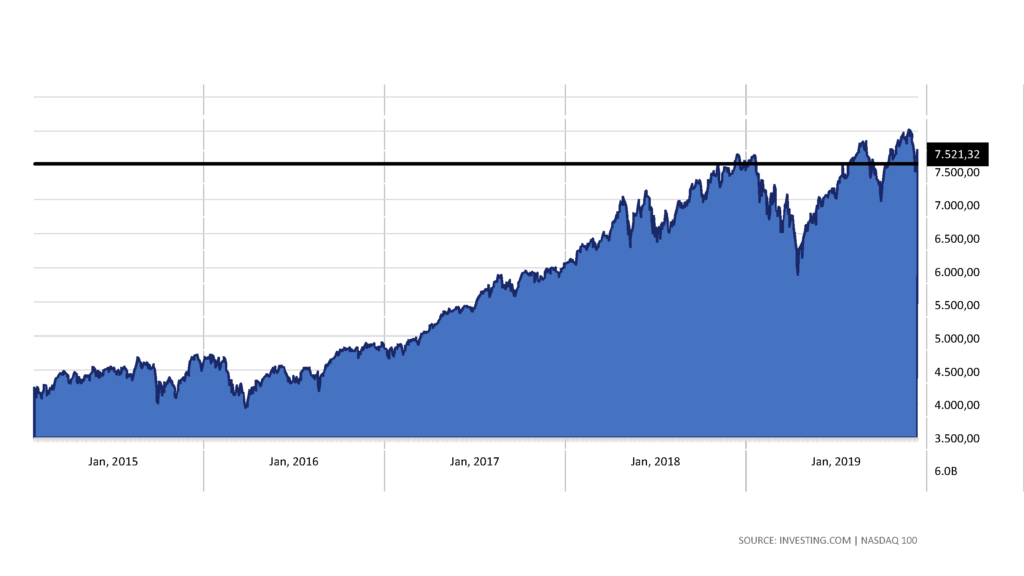 Today, that surge carries on as tech stocks, and tech giants, in particular, continue to thrive. Apple, Microsoft and Amazon have all been valued in excess of $1 trillion during the last year or so, while globally there are now more than 360 “unicorns”—private start-ups valued at more than $1 billion, the overwhelming majority of which are in tech-related sectors. And then there are the FAANG (Facebook, Apple, Amazon, Netflix, Google) stocks that have virtually propelled the entire stock market skywards on their own. Today, those five companies alone represent around 10 percent of the S&P 500’s market capitalisation. And according to Yardeni Research, the forward P/E (price-to-earnings) ratio on FANG stocks (minus Apple) was a mammoth 47.1 as of August 9.

But such spectacular figures are also increasing talk of a tech bubble transpiring. And those murmurs are not without justification. Last year, for instance, US markets experienced a total of 134 firms listing publicly, but according to the Warrington College of Business at the University of Florida, 81 percent of those firms turned out to be loss-making companies, whilst almost one-third were tech stocks. This proportion of publicly listed loss-making companies was equalled only in 2000 during the dot-com bubble when 380 companies went public. Alasdair McKinnon, manager of the Scottish Investment Trust, believes that we are currently in the midst of a “disruption bubble” similar to the dot-com one, with numerous companies seeking to disrupt traditional industries now offering rival products at a discount. But as McKinnon observes, many of these companies “do not make any money and are burning cash like there is no tomorrow”. As such, investment is “piling in leading to companies being given share prices that far outstrip their true value”.

Such a trend could well be repeated this year, moreover, despite the IPO (initial public offering) market looking set on topping the $97-billion record value achieved in 1999. Many of the highest- profile offerings have listed despite remaining in the red. Take Uber as an example. The popular ride-hailing app went public earlier this year at a valuation of $82 billion before it announced a $1-billion loss in just the following month. Similarly, fellow ride-hailing service Lyft was valued at just over $24 billion in its first IPO in March, despite having lost more than $2 billion during the previous three years. And although Uber and Lyft are generating revenue, their services are so underpriced that as Uber’s IPO filing admitted, they may never achieve profitability.

Another crucial factor for the tech industry to consider is the coming regulatory onslaught, which is likely to impact the tech giants in particular. Indeed, Goldman’s David Kostin acknowledged in June that rising market concentration and the current political landscape suggest “regulatory risk will persist and could eventually weigh on company fundamentals”. Already, the US Department of Justice, Congress and the Federal Trade Commission (FTC) have launched antitrust investigations into tech giants, thus providing the clearest indication yet that the market power commanded by the sector’s biggest names is under threat. The Justice Department has been liaising with industry experts to determine the harm that tech giants may have caused their customers. “Without the discipline of meaningful market-based competition, digital platforms may act in ways that are not responsive to consumer demands,” said Makan Delrahim, the Justice Department’s head of antitrust. With new rules and fines also being imposed on tech firms by both US authorities and the European Commission (EC), there is every chance that regulatory factors could end up weighing heavily on tech valuations.

But could such issues have such a disastrous impact on tech stocks as to precipitate a market collapse? Some believe that at this stage, such an outcome may be a bridge too far.

It is also worth acknowledging, for instance, that valuation metrics are currently nowhere near the extremes reached during the dot-com bubble. In 1999, the P/E ratio of the Nasdaq Composite index had at one point surpassed 90. Today, it is not even 20. And according to the University of Florida, the average price-to-sales ratio of the companies that went public in 2000 was an incredulous 48.9, almost three times as much as that of this year’s five biggest IPOs. As such, current IPOs are showing few of the signs of a bubble forming that were present in 2000.

The clear difference in valuation metrics also shows that the tech companies of today are more solid and have more financially viable business models than those of the dot-com era. Whilst a similar proportion of tech companies may well be loss-making, substantially more companies had proven revenues before going public. “The end goal is market domination, price rises and profit monopolies at some point in the distant future,” Duncan MacInnes, an investment director at Ruffer recently told the United Kingdom’s The Daily Telegraph newspaper. “The key thing for investors to realise is that while they may be correct on the eventual market dominance of many of these tech unicorns, they could still be worse off in the short and medium term.”

And with tech giants generating vast amounts through advertising (especially by Facebook and Google), as well as through licensing services such as cloud computing, significantly more cash is being generated by the sector’s biggest players than it was 20 years ago. Indeed, the majority of companies on the Nasdaq 100 are comfortably profitable at present; in contrast, a much greater proportion of the index’s constituents in 2000 were either loss-making or generating only marginal profits. Overall, therefore, it would seem that today’s technology companies are, on the whole, less of a speculative prospect than their internet counterparts of 20 years ago.

Of course, even if there is an absence of the type of crazed speculation that characterised the dot-com bubble, today’s tech stocks could still experience a pronounced reversal in price. Valuations of many stocks currently remain far too high. The S&P 500 information-technology sector, for example, is trading at around 20 times the estimates for forward earnings, which could soon prompt a pronounced sell-off. And with a looming trade war continuing to threaten global economic prosperity, a dramatic stock-market downturn is not out of the question—indeed, both the S&P 500 and the Nasdaq Composite suffered their worst week of the year in early August after the United States announced a fresh set of tariffs on Chinese imports. Nor is the emergence of conditions that would induce a decline in investor confidence, or even a slide in earnings by the tech giants, such as the high likelihood of more onerous regulation in the not-too-distant future.

That said, with numerous pundits dubbing this current tech-inspired era as the “Fourth Industrial Revolution”, we are yet to see what the coming wave of innovation will bring, particularly with respect to technologies such as blockchain, artificial intelligence (AI), machine learning (ML), deep learning, quantum computing, biometrics and data science. And that means there’s still more to come from this tech boom, as companies continue to break new, even higher ground. While a crash may not be foreseeable anytime soon, therefore, with further market gains expected, there is every chance that a hype-ridden bubble could form at some point.

As such, although history may not be repeating itself at present, a pronounced market correction for tech stocks in the future is not entirely out of the question.

How Your Bank Can Benefit From the Rise in Invoice Financing