Top Posts
Challenges Remain, But There Are Opportunities to Be Had in...
Interview with Mr. Olukayode Pitan, Chief Executive Officer and Managing...
Commodities Outlook for 2023
The Value of Cash in a Time of Crisis: How...
The US-Africa Leaders Summit: Fostering a Closer Relationship with the...
Three Key Sectors in Which to Invest in 2023
Home Brokerage Is It the End of the Rollercoaster Ride for Lumber Prices?
Brokerage

Is It the End of the Rollercoaster Ride for Lumber Prices? 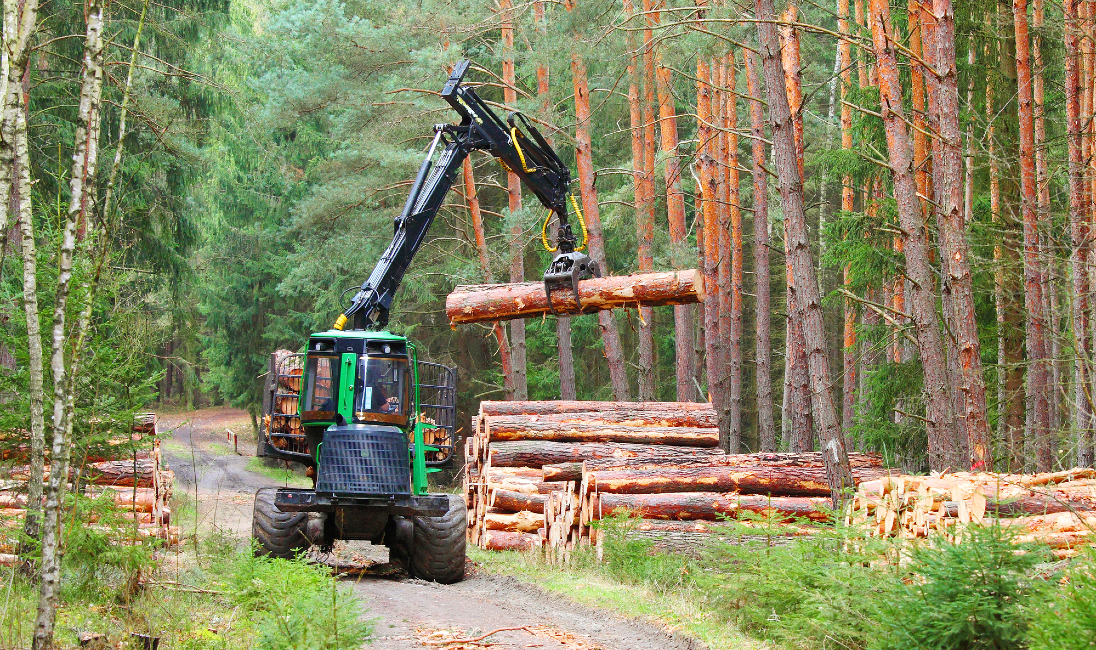 The first half of 2021 was characterised by strong rallies across much of the commodities complex, with everything from oil to copper experiencing pronounced rallies on the back of resurgent demand and damaged supply chains as the global economy recovered from the economic shock inflicted by the coronavirus pandemic. But arguably, no other commodity has experienced quite the dramatic rollercoaster ride over the last year as lumber has.

In June, benchmark lumber futures contracts trading on the Chicago Mercantile Exchange (CME) suffered their biggest monthly price drop on record dating back to 1978, thus decisively marking the end of the bubble that had formed earlier in the year and had taken lumber prices to record highs. Lumber tariffs were already supporting prices in early 2020, but a surge in lumber consumption from homebuilders and “do-it-yourself-ers” (DIYers) since last summer was the key motivating factor as the pandemic shifted consumer priorities towards buying new houses and sparked a resurgence in home-improvement activity.

At the same time, lumber production was initially caught off guard as it was widely expected that the pandemic would subdue housing demand. Sawmills thus unloaded inventory in anticipation of a potential housing crash; instead, the opposite occurred—housing interest from consumers continued to expand after a brief initial lull, and lumber was highly sought after from the summer onwards. “Clearly, increasing the cost of imports via tariffs does not help the situation,” Robert Dietz, chief economist for the National Association of Home Builders (NAHB), acknowledged in April 2021. “We need to do everything that we can to increase domestic supply, including producing more domestic lumber, as well as resolving the trade dispute. It is [a] matter of housing affordability.”

Indeed, this demand-supply imbalance was crucial in driving up prices throughout the latter half of 2020 and early 2021 before lumber futures hit an all-time high in May of $1,670 per thousand board feet (mbf). Since then, however, prices have crashed by more than 65 percent. June’s approximate 40-percent decline along with the continual slide in prices in July ended up reversing gains made throughout 2021…and then some.

So, what has been behind the sharp reversal in lumber prices? A range of factors, it would seem. For one, suppliers have boosted output in recent months to capitalise on the initial rally, which has somewhat eased the market tightness. Demand for lumber has also cooled since May as the DIY boom faded on the back of consumers both reallocating their budgets in line with the recovery from the pandemic, as well as holding back on lumber purchases in the hope that prices would head further south. “People are just spending less time in their homes,” Dustin Jalbert, senior economist at Fastmarkets, told Canadian news publication The Globe and Mail in late July, adding that the gradual return to normality is prompting them to shift their budgets towards travel, restaurants and sporting events rather than repair and remodelling projects at home. “You’re not seeing that ratty old deck or the ratty old fence or the things you need to fix as much…. You can now entertain yourself outside the home, and that kind of puts less pressure on doing those projects.”

As such, the initial supply-demand mismatch that helped prices surge earlier in the year appears to have closed markedly, which has helped bring prices down to earth. Indeed, by mid-July, lumber prices were back to where they had been a year earlier, helping builders and the DIY sector and allaying fears of accelerating inflation constraining the economic recovery. “This drop suggests that the cause of that inflation—the mismatch of supply and demand—will not last forever,” Brad McMillan, chief information officer (CIO) at Commonwealth Financial Network, told CNBC in late June. “As suppliers across industries get their acts together, those shortages will fade, along with the inflation. That looks to be happening for lumber now and will happen for other inputs later.” 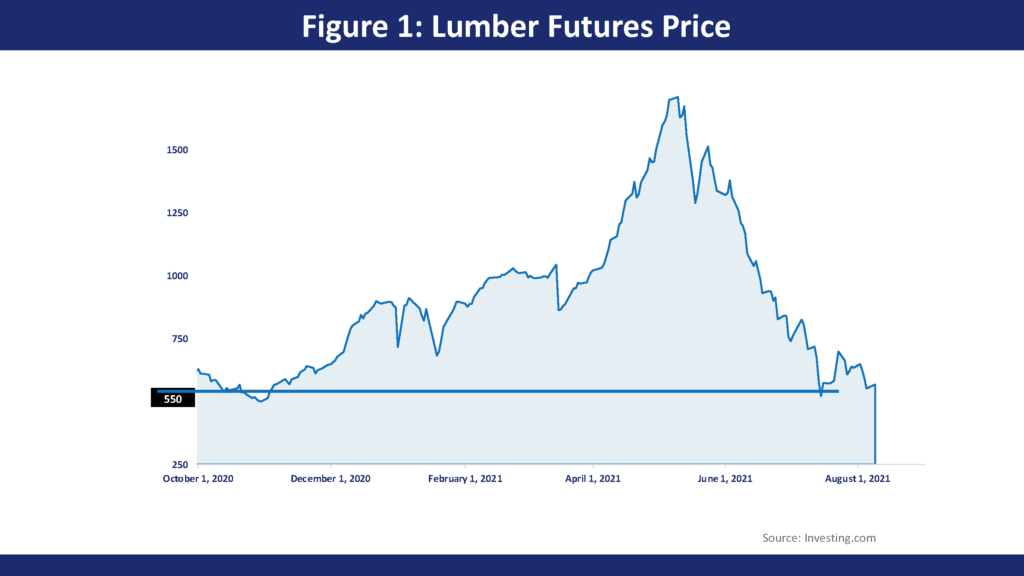 “The move up was quick and violent, and the fall we have seen has been equally dramatic,” Steve Loebner, director of risk management at Sherwood Lumber, told Fortune magazine. “I think we are getting close to a trading level being established, which will bring in buyers off the side-lines and firm up the market. I don’t expect a return to the hyper volatility on the upside we experienced earlier this year, but it’s very reasonable to expect that prices will remain well above their historic norms overall.”

Will prices keep on falling? According to Stuart Katz, CIO at wealth-management firm Robertson Stephens Wealth Management, there could well be room to fall further, with the price possibly reaching its pre-pandemic level in the next 12 months. Whether prices remain at such levels remains to be seen at this stage, however, with Katz citing likely monetary-policy action to be taken by the Federal Reserve and the ability of home builders to pass along price increases or take margin compressions as being key in determining future price movements. “You can’t lean on history when you turn off and then reopen the largest economy on the face of the earth,” Katz told Markets Insider in mid-July. “No one has the crystal ball, so you need to look at the key fundamentals which provide push and pull pressures on, ultimately, the equilibrium of the price.”

But not everyone sees further bearishness on the horizon in the interim. Aberdeen Standard Investments strategist Robert Minter, for instance, stated in early August that prices look “cheap” now, with many Americans still planning to move into new houses should they still be allowed to work from home. “People are moving from where they had to live to work to where they want to live,” Minter told Markets Insider. “All the people that want to move out of the city centre and the near suburbs to someplace cheaper, those people have not all moved.”

Wildfires in British Columbia, Canada, where three of the six largest North American lumber producers are located, have forced the Canadian province to declare an extended state of emergency until mid-August and have also caused a spate of supply disruptions in recent weeks that have moderately supported prices—or, at least, have prevented an extended price rout. The fires have triggered closures of the rail lines that sawmills in the province use to export their lumber. “The mills all have fairly large inventories of logs right now, and they could be exporting into the US if they could, but the problem that they’ve got is actually the transport,” John Innes, dean of forestry at the University of British Columbia (UBC), recently explained to CTV News Vancouver.

But whether the wildfires will hold off further price depreciation is uncertain, especially given the substantial backlog of lumber inventory still held by sawmills. “Producers had enough logs to last between two weeks and two months, depending on the mill,” Madison’s Lumber Reporter, a Vancouver-based industry newsletter, reported in late July. With wholesalers having bought this lumber at much higher prices earlier in the year, most remain committed to selling it to retailers at elevated values to avoid losing money, despite the subsequent market crash.

As such, consumers are still waiting to see lower prices fully filter down beyond wholesalers to the retail level, while lumber packages still being quoted to builders remain near record highs. “Soaring lumber prices that have tripled over the past 12 months have caused the price of an average new single-family home to increase by $35,872 and up, according to the National Association of Homebuilders,” Sandy Griffis, the executive director of Yavapai County Contractors Association (YCCA), wrote in the Arizonan news publication Williams-Grand Canyon News in June. “The average price this past week for a framing lumber package was $1,446 per thousand board feet. One year ago the price was $441 per thousand board feet.”

It would seem, then, that the appetite for lumber remains strong, but whether customers will soon re-enter the market depends on whether they believe there is still room on the downside for prices to keep falling or not, according to Madison’s Lumber Reporter. “Are price levels approaching the bottom, prompting many to pull the trigger and make the purchases they have been holding off on, preferring to wait [to see if] prices will drop further?” the newsletter’s July 23rd edition asked. It would seem that only time will tell.