Top Posts
Challenges Remain, But There Are Opportunities to Be Had in...
Interview with Mr. Olukayode Pitan, Chief Executive Officer and Managing...
Commodities Outlook for 2023
The Value of Cash in a Time of Crisis: How...
The US-Africa Leaders Summit: Fostering a Closer Relationship with the...
Three Key Sectors in Which to Invest in 2023
Home Brokerage Is It Worth Investing in 5G Yet?
Brokerage

Is It Worth Investing in 5G Yet? 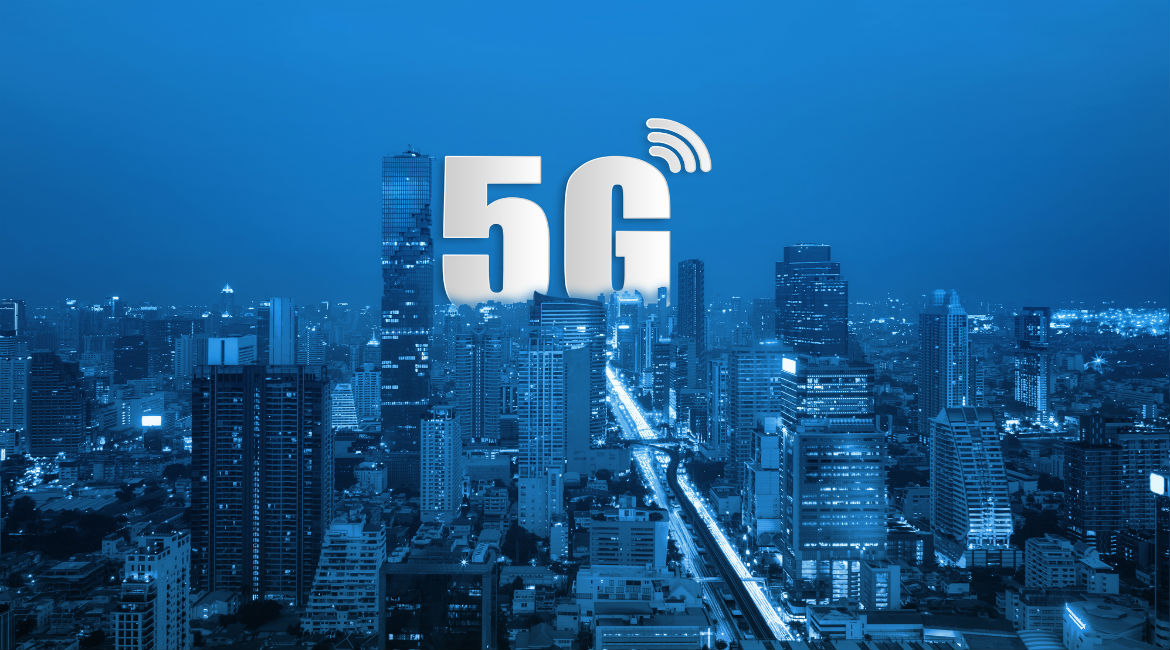 Things are about to get faster. A lot faster, if recent estimates are anything to go by. And that’s because 5G is coming. As telecommunications companies (telcos) now launch the first 5G networks, the world eagerly waits to see if all of the hype of the last few years is, in fact, true. And that means the investment opportunity that 5G presents is now sharply coming into focus.

5G represents the fifth generation of wireless connectivity. It promises to be much faster than the current fourth-generation 4G and LTE (Long-Term Evolution) networks, meaning that users should be able to download files, transfer data and browse the internet at much faster speeds than what telco services are capable of now. Of course, demand for better communication has existed since time immemorial. But if 5G delivers on its promises, it would undoubtedly represent a massive leap in the capabilities of wireless connectivity. Major US telco company Verizon previously stated that its 5G network will deliver up to 200 times greater speeds than that of LTE. Although such speeds have not been witnessed as yet, users are reporting experiencing download speeds around 10 times faster with their 5G devices. And some have even gone so far as to claim that 5G will be as important as the internet and “a game-changer for humanity”. While this may seem like hyperbole, the more applications being touted to be positively impacted by 5G, the more profound the technology seems.

Last year, when speaking to the Financial Times, Intel’s corporate vice president, Asha Keddy, elucidated some of the incredible feats that 5G could achieve. Self-driving cars, for example, will be able to communicate with each other and confine traffic congestion to a thing of the past. “That will be the end of red-light, green-light traffic junctions,” according to Ms Keddy, who describes a smarter, more synchronised stream of traffic flowing across junctions instead. 5G will also allow patients to receive hospital services from their own homes, rather than having to occupy scarce hospital beds. “All these kinds of things become possible because we’re looking at a fully mobile, intelligent, 100 percent connected society.”

But is now the right time to invest, or should investors wait for further development? Certainly, from a growth perspective, the 5G market is set to balloon over the next few years. An industry intelligence report by BIS Research titled “Global 5G Infrastructure Market – Analysis and Forecast, 2019-2025” sees the global 5G-infrastructure market growing by more than $42 billion by 2025. The market, which has a 2020-projected valuation of $2.55 billion, is expected to grow at a CAGR (compound annual growth rate) of 75.09 percent during the period. Subscriptions to 5G networks will reach 2.6 billion in 2025, equivalent to more than one in every five mobile connections. And from a user perspective, all signs point to a rapid adoption rate over the coming years. A report in October by technology research and market intelligence firm CCS Insight predicts that 5G connections will reach one billion worldwide by mid-2023, thus getting to this milestone more quickly than 4G, before accelerating to a whopping 2.6 billion by 2025. If true, it would mean that one in every five mobile connections will be using 5G.

The report also makes it clear that China will lead the way. Even though 5G deployment will have occurred in most parts of the world by 2025, the world’s second-biggest economy will still account for around 40 percent of all global connections by then. Although South Korea, Japan and the United States are competing to be the first to launch commercial 5G networks, China will easily lead in subscriber numbers. The European Union (EU), meanwhile, will trail by at least a year. According to Marina Koytcheva, CCS Insights’ vice president of forecasting, China will play a far more influential role for 5G than it did for 4G. “China will dominate 5G thanks to its political ambition to lead technology development, the inexorable rise of local manufacturer Huawei and the breakneck speed at which consumers have upgraded to 4G connections in the recent past.”

And although China is yet to formally launch commercial 5G services, figures from the China Academy of Information and Communications Technology (CAICT) show that investment in the technology in the country is expected to hit CNY900 billion to CNY1.5 trillion between 2020 and 2025. Already the technology is having a significantly positive impact on employment. Recent reports citing data from online recruiter Zhaopin show that 5G-related jobs during the first five months of the year have grown by nine times, compared with the same five-month period in 2018. The growth of job openings was a staggering 806 percent, while average monthly salaries for such jobs have surged by 44 percent.

CAICT also sees 5G generating CNY10.6 trillion in economic value and more than three million jobs during the five-year period. In June, China’s Ministry of Industry and Information Technology (MIIT) issued commercial 5G licences to China Telecom, China Mobile, China Unicom and China Broadcasting Network. And 10 million 5G subscribers have already signed up to the operators as the first round of standalone infrastructure now launches—vis-à-vis non-standalone, which service providers can more easily opt for if they prefer to utilise their existing network assets, rather than pursue entirely new network infrastructure when transitioning from 4G.

But the outlook for 5G is not wholly positive. On the contrary, there are still key challenges to solve before mass rollout and adoption occur. CCS Insight observes such uncertainties as “how and where network operators will deploy vast numbers of new base stations, the lack of a clear business case for operators, and consumers’ willingness to upgrade their smartphones”. And in Europe, additional problems—such as “market fragmentation, the availability of spectrum and the influence of regulators bring additional challenges”—also remain.

Perhaps that is why telcos are exhibiting much more frugal behaviour during this first stage of 5G deployment than they did with 4G. A survey by Rethink Technology Research found that cost containment is currently the number one priority for cellular operators but that upfront 5G costs remain lower than they were for 4G. As such, mobile-network operators are aiming to preserve as much existing network infrastructure (non-standalone) as possible during this initial phase of 5G deployment, before eventually migrating to standalone mode. It also suggests that greater amounts of expenditure may come a few years down the line rather than today. For those looking to invest in 5G over a shorter time horizon, therefore, it may not yet be the ideal time to buy.

One of the early industry leaders is also cautioning against the hype. Nokia has warned that there will be tough competition and costs tied to generating new 5G networks, which is already impacting its profits. The Finnish company reported a 14-percent drop in its third-quarter net profits and believes mobile operators remain somewhat apprehensive due to concerns over cybersecurity. Indeed, the EU has recently warned that 5G networks are vulnerable to many cyber-threats, including from hostile “states or state-backed actors”, who may carry out attacks. Nokia’s chief executive officer, Rajeev Suri, also acknowledges that there is “pricing pressure” to close 5G deals at this stage, as operators remain averse to paying over the odds for the technology. Nokia has even halted its dividend payments in order to raise its investment into 5G. Along with Sweden’s Ericsson and China’s Huawei, Nokia is among the frontrunners in 5G. It recently stated that it has 48 commercial 5G deals and 15 live networks, around the same as its Swedish peer but lower than Huawei.

Coverage at this stage also remains spotty at best. As Kevin Zhang, chief marketing officer of Huawei’s ICT (information and communications technology) infrastructure, recently opined, building 5G networks “that ensure ubiquitous, continuous coverage” will be the foundation for ensuring return on 5G investment. We may not be quite there yet, but it also seems we are not far off. With the rollout of the first 5G smartphones taking place earlier this year, it’s only a matter of time before today’s intermittent 5G services become “ubiquitous” and “continuous”.

Over the longer term, it seems almost certain that 5G will represent one of the major game-changing technologies as part of what is being widely dubbed the “Fourth Industrial Revolution”. By 2035, IHS Markit’s research sees the full global economic impact of 5G being felt, with around $12.3 trillion worth of goods and services estimated to be enabled by 5G networks. About 22 million jobs tied to 5G will be created, and the network will add a staggering $3 trillion to global gross domestic product (GDP). And as the world continues to become more connected through an increasing array of devices, 5G will all but ensure that the connectivity demands of and between these devices will be sufficiently met. As a long-term investment, therefore, 5G is one of the safer bets one can make.

Banking Professionals Can Harness Unpredictable Market By Being Open Minded

How can I buy this stock!